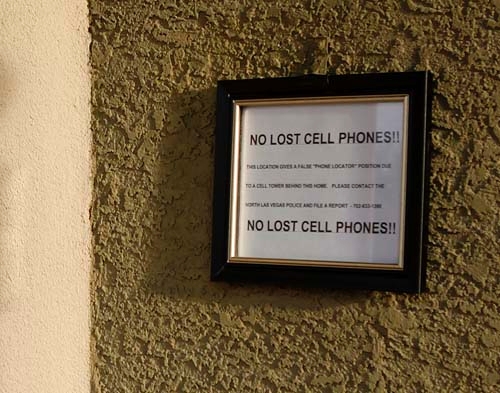 Wayne Dobson doesn’t have your cellphone.

In the past two years the 59-year-old retiree has been pestered by people showing up at all hours of the day and night at his house, demanding their phones. They’ve yelled, shown him evidence, called the police – sworn that their phone is in his house.

But he’s no thief.

What has become a powerful tool for police hunting down bad guys and people who lose their phones or who call 911 has backfired on Dobson. An unexplained glitch with at least one cellphone company is directing people with missing phones to his North Las Vegas home.

And the glitch is also affecting police, who have twice been wrongly directed to his house on domestic violence calls. That has forced Dobson to post a sign on the front of his house telling people he doesn’t have their phone.

The situation is one that has puzzled experts.

"That’s crazy," said John B. Minor, a communications expert who specializes in cellphone tracking. "This sort of thing I’ve not seen."

The problem appears to be limited to some owners of Sprint phones. Company officials said they are researching the problem, which has forced Dobson to sleep near his front door on weekends so he can answer the door quickly at all hours.

‘I HAD A PROBLEM’

Dobson’s misadventure started in 2011, with a knock on the door around midnight on a weekend. He opened the door and found an upset young couple demanding that he turn over their phone.

"I’m standing there and I’m thinking, ‘What are they talking about?’ " he said. "They might as well have said, ‘Give me my horse back.’ "

After debating back and forth, both sides called police. When officers arrived at his home, near Craig Road and Donna Street, Dobson expressed his confusion.

"I just said, ‘I don’t know these people; I don’t go where they go.’ I’m 59 years old. I don’t care about these technology pets they have."

The couple left without their phone, and he never heard from them again. It wasn’t long before he realized he had a bigger problem on his hands.

He saw a woman wandering through his backyard. But before he could talk to her, she jumped over the wall. A few minutes later he heard a knock on the door.

"Please give me my phone," she said.

When he explained that he didn’t have it, she became insistent.

"I’ve got pictures of my grandchildren," she said. "I can’t replace them. I need them. All I want are my pictures."

He told her to call the police and invited her to come inside and search. In the meantime, he called the woman’s cellphone provider, Sprint.

A technician there explained the problem, but didn’t provide a solution, he said.

Dobson was told that cellphone GPS systems don’t provide exact locations – they give a general location of where to start your search. And for some reason his house is that location for his area.

All cellphones today have a form of location-tracking, often using a combination of satellite GPS and "triangulating" a signal between nearby cell towers. For most smartphone users, that allows turn-by-turn driving directions, a list of nearby restaurants and real-time weather updates.

Those are all convenient services, but location-tracking has a more important purpose.

In 1997, cellphone users were roughly one in three callers to 911 dispatchers. And dispatchers didn’t know what to do in situations where the person couldn’t, or didn’t, provide their location. For land lines, dispatchers automatically knew where they were.

If you were in Chicago calling from a cellphone with a 702 area code, for example, Chicago dispatchers would forward the call to Las Vegas police.

That was unhelpful at the least and dangerous at the worst, said Ben Levitan, who spent 30 years designing cellphone networks and holds dozens of patents on the technology.

"There were some horrible situations which prompted the FCC to go, ‘Look, you’ve gotta fix this,’ " Levitan said.

Cellphone companies came up with a way to locate the phones and instantly transmit their coordinates to dispatchers. Today, as 70 percent of phone calls to 911 are made by cellphones, dispatchers can see where they are calling from. The information must be accurate to within 50 to 300 meters, depending on the type of technology used.

The system has since spawned a host of other uses. Companies like Apple, Microsoft and various third parties all provide ways to track missing phones from a computer or tablet. When New York Times technology columnist David Pogue lost his iPhone last year, he used Apple’s software to track it to the backyard of a Maryland home. Police picked up the phone and returned it.

It’s also been useful for police. They have used it to solve crimes by showing a suspect’s phone was at the crime scene, although they have also been criticized for using the technology without a warrant.

Experts say the systems are not completely reliable. You don’t need to tell that to Dobson.

It wasn’t until December that Dobson felt the situation had gone from a nuisance to a danger.

Four different groups of people had showed up at his house in the two years before. And North Las Vegas police showed up to his home once, in error, responding to a domestic dispute call.

The phone’s owner had an application on a tablet computer that showed his phone was in Dobson’s house.

"He was … literally proving to me that I had his cellphone," Dobson said.

About two weeks later he was awakened at 4 a.m. by a person prowling along the side of his house. Dobson followed a flashlight beam to his bathroom window. When he looked out, the person flashed the light in his face.

North Las Vegas cops had received a 911 call from a woman on a cellphone who was arguing with a man. The argument was escalating, but dispatchers weren’t able to get a location from the woman.

They looked at the location of the phone and sent officers, who arrived minutes later at Dobson’s house. He was taken outside to his front yard and searched. When officers realized the mistake, they apologized.

Dobson said he is grateful that he didn’t confront the officers with a weapon.

He now has a sign next to his front door telling people that he doesn’t have their phone and advising them to call police.

North Las Vegas police spokesman Chrissie Coon said the department rarely dispatches officers to locations based on cellphone GPS coordinates. It’s even rarer that those coordinates are wrong. And she had never heard of a situation like Dobson’s.

"We’re relying on the accuracy of the information that’s given to us by the carrier," she said. "It’s just not a perfect technology."

Coon confirmed that police have responded four times to Dobson’s house – twice for people who believed their phone was there. Each time the phone was a Sprint phone.

They now are going to flag any calls to Dobson’s home, but they will still send officers to the scene unless they can confirm that there isn’t actually a problem there.

Coon said Dobson’s example is a good reason why people should have land lines in their homes.

A Sprint spokeswoman said the company is researching the problem.

"We will research the issue thoroughly and try to get to the bottom of what is going on and if it has anything to do with our company," spokeswoman Rachael Crocker wrote in an email.

Minor and Levitan, who both testify as expert witnesses in civil and criminal cases, said they don’t believe the problem is with the cell tower, which is close to Dobson’s home. They both said the problem is more likely to be at Sprint’s switchboard. A software problem is incorrectly translating coordinates to Dobson’s house.

And because there is clearly a problem with the 911 system, the issue is serious, they said.

"This isn’t the kind of error you would just shrug off," Minor said. "They should be very diligent in preventing these types of problems."

"It’s like Pavlov’s response now; I dread the thought when I hear a car drive by that they’re going to be pulling in and knocking on my door," he said.

Levitan said he has seen a lot of strange things in the cellular world, but, "I’ve never seen this specific problem come up."

That’s little comfort to Dobson. "Lucky me, huh. I couldn’t be the multimillion-dollar winner. No. I’d rather have that problem."