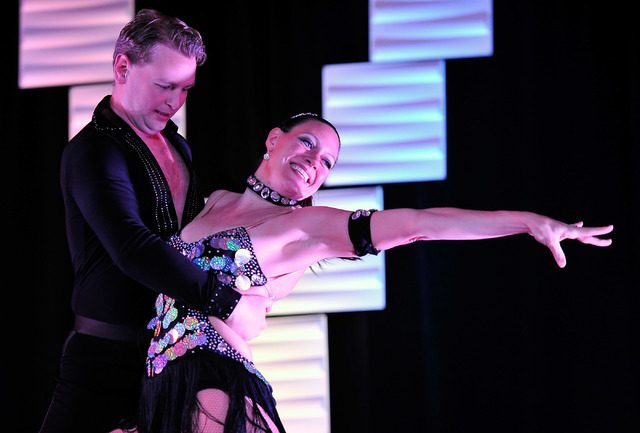 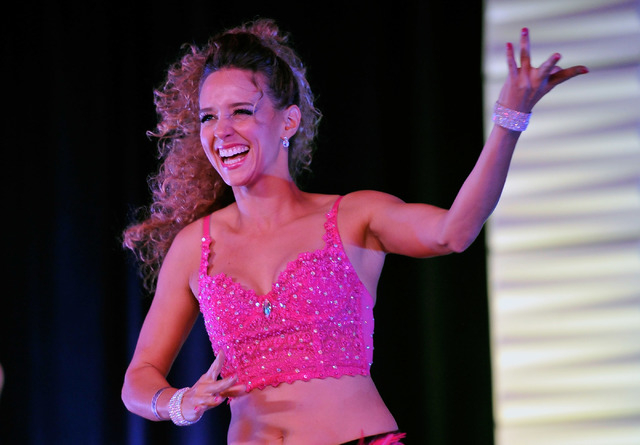 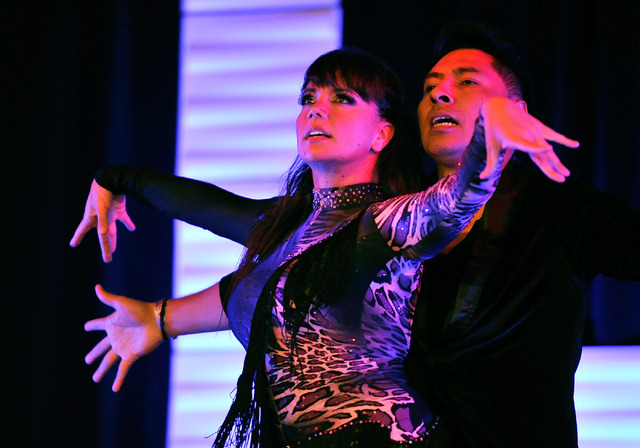 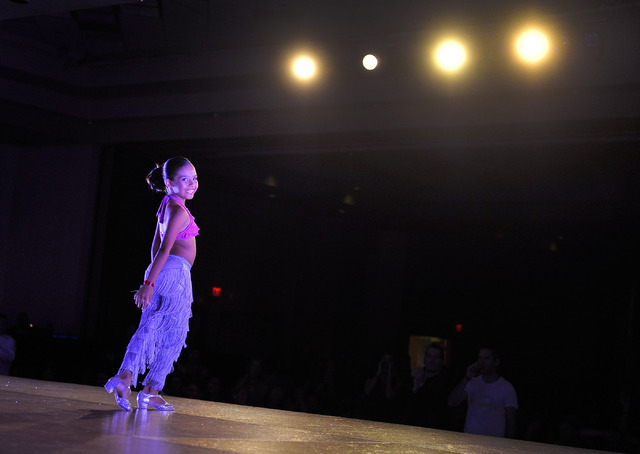 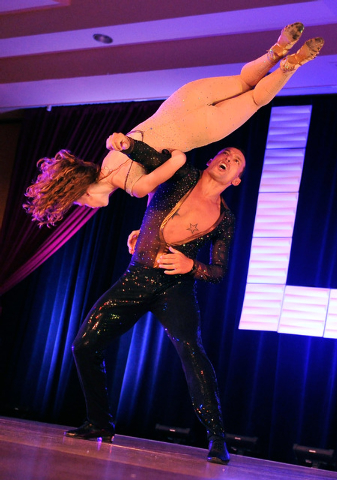 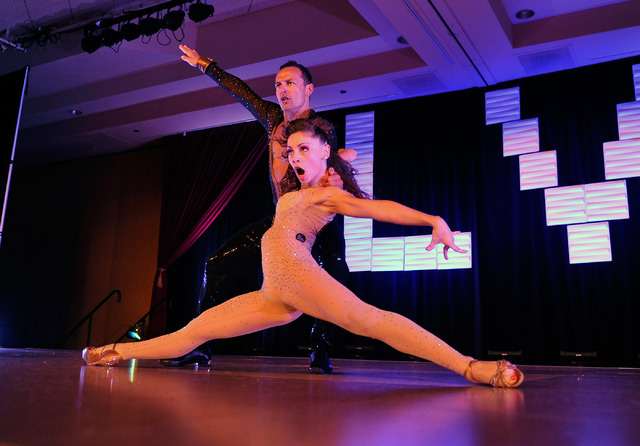 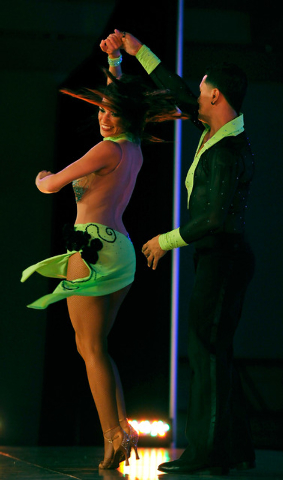 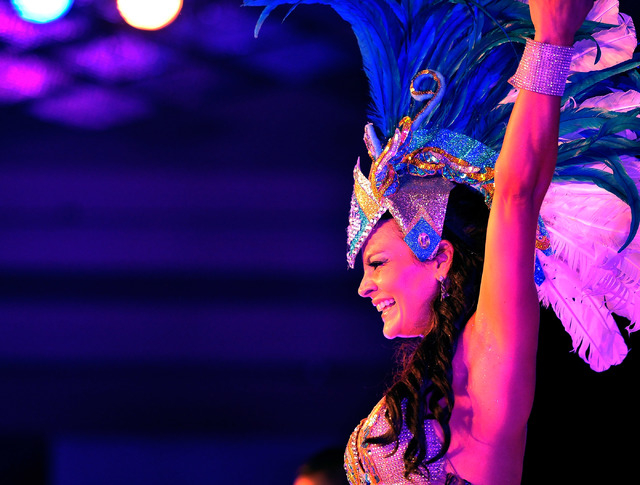 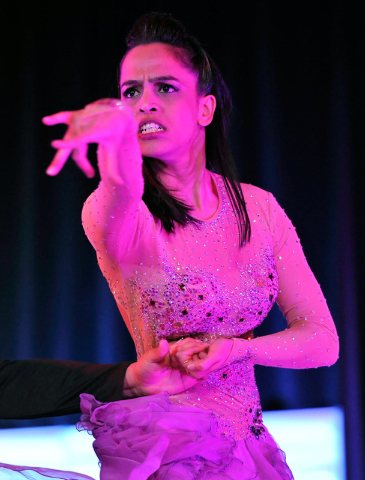 The two Brazilian dancers are hopping around offstage.

Both are dressed extravagantly from top to bottom.

The woman wears golden high heels and an elegant black dress covered with sparking sequins that give it the appearance of a starry night.

The man has on a black felt shirt with a shiny silver collar over black pants and shoes that look like they were constructed with the remains of a silver disco ball.

When the two take the stage, other performers backstage gather in the wings to watch.

The music starts and multi-colored lights onstage illuminate the dancers, whose rapid movements make it look like they’re shifting from color to color inside a prism.

Onstage, the full athleticism of the performers is on display, as the they move fluidly around the floor, separating to complete solo moves in perfect synchronization and then merging back together into closed position.

Rafael Barros and Carine Morais, the world champion salsa dancers, are performing for the first time in Las Vegas in front of an international audience.

On a rainy Fourth of July, the spectacle on the Tropicana stage creates more noise than any firecracker could.

Now in its 11th year, the Las Vegas Salsa Congress has been held at the Tropicana since 2008, and in prior years at the Stardust and Palace Station.

Virginia Cano, co-director of the Sin City Salseros, has watched the salsa scene in Las Vegas grow since joining the dance company in 2001. The group was first formed by current co-director Nate Stager and Bill Schindler in 1999.

The first event had only 200 to 300 people, Cano said. This year’s event is expected to draw around 4,000, which would make it the second largest event of its kind in the United States, she said. Only the Los Angeles Salsa Congress draws more attendees.

The World Latin Dance Cup is regarded by professional dancers as the premier proving ground, next to the Puerto Rico Salsa Open.

Barros and Morais won it last year, after winning the Puerto Rico Salsa Open for three straight years. The two dancers from Fortaleza, Brazil, said they’ve been dancing salsa for more than 12 years. As the duo has grown in demand for their performances — they said they’re booked until next summer — their practice time has dwindled.

But, during competition time, they cancel everything to do physical workouts in the morning and to dance all afternoon until 8 at night, said Morais in Spanish.

“There’s not a day in our lives that we don’t dance,” said Morais. Even when they’re stranded in airports en route to another performance, the two find time to practice in the airport, Morais said.

After traveling to over 25 countries to perform, including India, Australia, and Israel, Barros is convinced that the most popular dance in the world is salsa.

“The places that you don’t think would have a salsa scene — have one,” said Barros in Spanish.

The Tropicana has enjoyed housing the influx of dancers that arrive every year. “The show continues to perform very well compared to the room block that we hold for them and has exceeded our expectations each year,” said Gavin Mealifee, the hotel-casino’s vice president of sales, in an email.

Behind the curtain offstage, a tall man with salt-and-pepper hair and wearing a gold-colored suit jacket and shamrock green pants watches the performances, clutching a microphone in his right hand.

The event’s host, Albert Torres, has been co-producing Salsa Congress events since 1999, when he founded the Los Angeles Salsa Congress. These days, he spends most of the year traveling to co-produce 42 congresses around the world.

Torres, once was a consultant for the 1998 Hollywood film “Dance with Me,” that starred actress Vanessa Williams and Latin pop singer Chayanne, calls himself an “ambassador of salsa,” and said he’s proud of how popular the dance has become.

“Salsa went from just the streets of New York to the world,” said Torres.

Just after 11 p.m., the performances over, dancers and attendees exit and wait excitedly outside while staffers clear out the seats in the auditorium in preparation for social dancing which won’t conclude until at least 4 a.m.