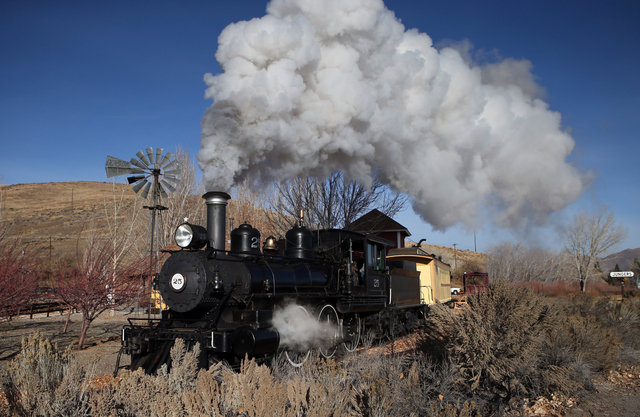 The Nevada State Railroad Museum runs the annual Santa Train with Locomotive No. 25 in Carson City, Nev., Sunday, Dec. 1, 2013. The engine, built in 1905, was initially purchased by the Virginia & Truckee Railroad for passenger service between Reno and Virginia City. (Cathleen Allison/Las Vegas Review-Journal) 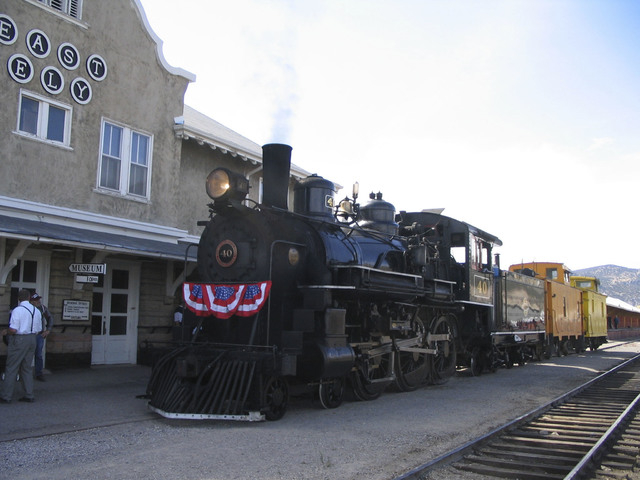 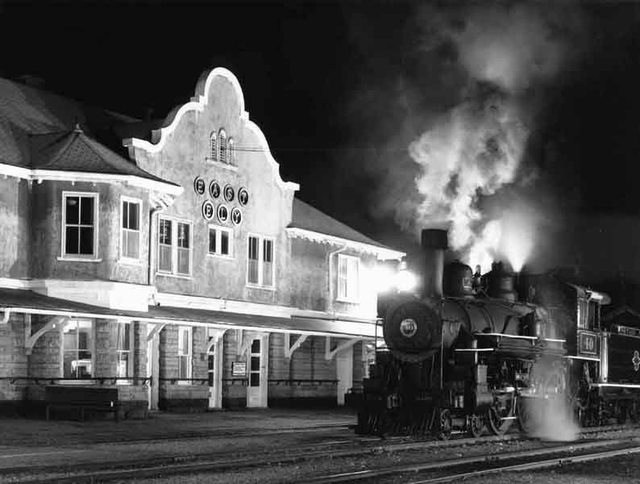 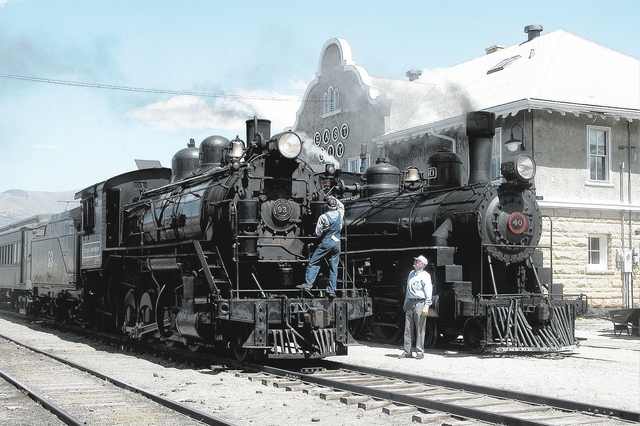 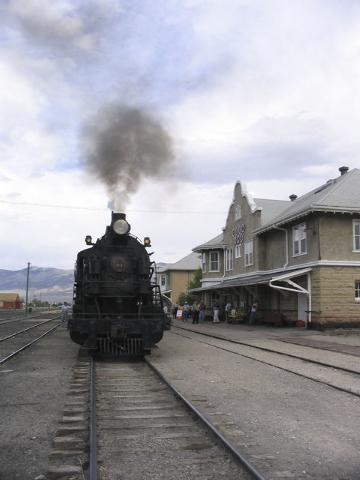 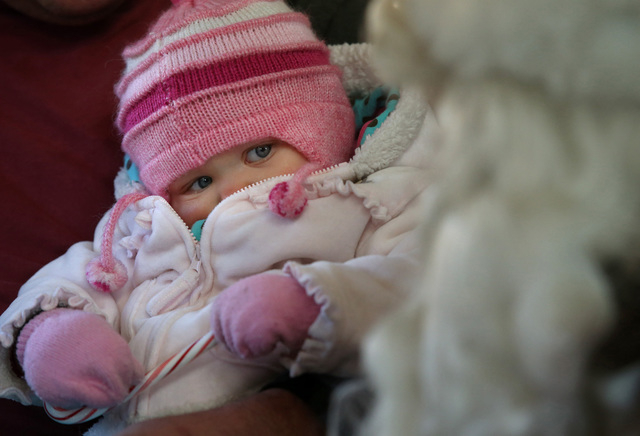 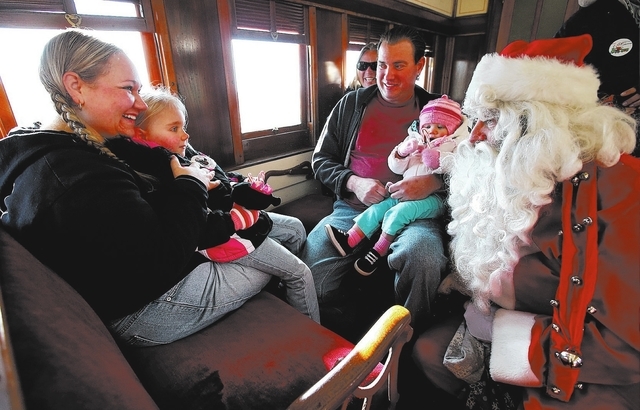 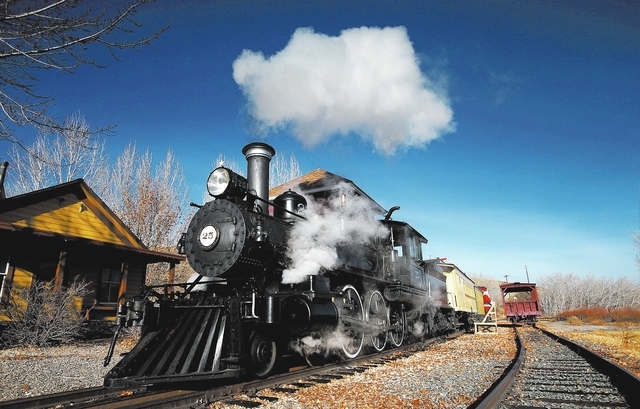 The Nevada State Railroad Museum runs the annual Santa Train with Locomotive No. 25 in Carson City, Nev., Sunday, Dec. 1, 2013. The engine, built in 1905, was initially purchased by the Virginia & Truckee Railroad for passenger service between Reno and Virginia City. (Cathleen Allison/Las Vegas Review-Journal)

Editor’s note: Nevada 150 is a yearlong series highlighting the people, places and things that make up the history of the state.

From the construction of the first transcontinental railroad to the development of Las Vegas, the “iron horse” played a significant role in Nevada’s early history.

And with significant efforts by train lovers of all stripes, Nevadans and visitors can still enjoy the sound of a steam locomotive whistle while riding the rails in more than one location around the state.

From White Pine County’s Ghost Train to the famed Virginia &Truckee Railroad, the “Queen of the Short Lines,” railroad buffs can visit different parts of Nevada and learn some history while having fun at the same time.

The two railroads aren’t the only options either.

So if it is trains you want, Nevada has a lot to offer.

“Contemporary Nevada owes more to its railroads than to its mines,” said retired University of Nevada, Reno, professor and historian James Hulse in his 1991 book, “The Silver State.”

“Nevada was almost uninhabited before the first railroad, the Central Pacific, was built. Between 1868 and 1905, however, half of the state’s present county seats originated as railroad towns.”

The transcontinental railroad was the first in Nevada. Constructed between 1863 and 1869, the railroad still runs through Northern Nevada, and train lovers can follow much of the route on Amtrak from Sacramento, Calif., to Chicago.

After the completion of the coast-to-coast link, “short lines” began to be built, typically running from mining strikes to the main rail lines.

The Virginia &Truckee, completed between Carson City and Virginia City in 1869, was one of these railroads.

It runs again now between the two communities after a lot of hard work by railroad fans, taking visitors through scenic Gold Canyon to Virginia City.

The Tonopah and Goldfield Railroad, the Eureka and Palisade Railway and others operated throughout Nevada when mining boom towns sprang up.

The Northern Nevada Railway, which still operates in Ely, is another short line that survives. It was constructed in 1905-06 to serve copper mining activities in the region.

Both railroads now serve as tourism draws to their regions.

Las Vegas itself was established as a railroad town in 1905 as a link in the San Pedro, Los Angeles and Salt Lake Railroad. The city was formed with the auction of 110 acres in what is now downtown.

Frank Ackerman, director of the Nevada State Railroad Museum in Carson City, said the exhibits at the facility highlight much of this history.

The museum’s acquisition of 19th century railroading equipment makes it one of the few in the country to focus on this period, he said.

The museum has a short stretch of track and on special occasions runs Locomotive No. 25, a Baldwin engine that was one of the last to be purchased by the Virginia &Truckee Railroad in 1905.

Ackerman, who rides Amtrak when he can, said the exhibits demonstrate to visitors that railroads were a tool that helped develop Nevada. It is what the early residents did with the railroad that is so fascinating, he said.

“There is such a story here,” Ackerman said. “It is so deeply embedded in Nevada’s history.”