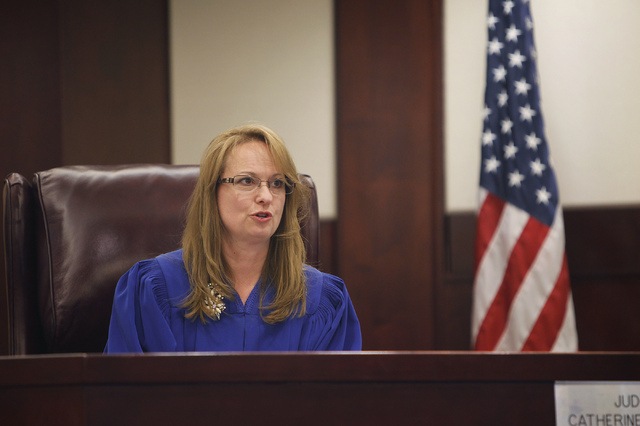 North Las Vegas Municipal Court Judge Catherine Ramsey contends the city is out to get her because she wasn’t willing to sacrifice justice to fill the city’s woefully lacking coffers, according to a lawsuit filed Tuesday.

The complaint argues that Mayor John Lee wants the judge gone so he can control the judiciary and Ramsey landed in political hot water after she wouldn’t let the city take more than $900,000 from the court. The money had been set aside for a new computer system for the court, according to the complaint.

Asked for comment, City Attorney Sandra Douglass Morgan said in an email that the city is not part of the recall, adding that the lawsuit’s allegations of city corruption are irrelevant to the question of whether the recall petition is sufficient.

The recall committee, which launched in March, has argued the judge should be booted for misappropriating city funds to pay for a private lawsuit, asking employees to perform personal errands on city time, missing an inordinate number of work days, and reducing defendants’ sentences arbitrarily, causing the city to lose out on revenue it would have otherwise gained from the cases.

Ramsey’s complaint accuses the Police Officers Association of committing a felony by making a $10,000 donation to the effort to oust her from office. The complaint says the donation went beyond the legal cap.

“I would not count on that judge to be able to interpret the law on a misdemeanor, gross misdemeanor or felony,” association President Mike Yarter said. “She just dismisses cases because somebody doesn’t dot an i or cross a t. She is a menace in our city. The taxpayers are getting the short end of the stick.”

Yarter said he had talked to an attorney about the donation and the cap applies to elections, not recalls.

Ramsey’s attorney Craig Mueller alleged in a phone interview that the Police Department wanted Ramsey to shake down citizens to make more money to support the department and that’s why the officers were putting money into the recall.

“The judge refuses to be a collection agency for the city of North Las Vegas, and the city employees band together and want her removed?” Mueller said. “That is the most anti-American thing I can think of.”

Yarter called that absurd and said he’s upset with Ramsey because she tried to disparage the reputation of a marshal who had been laid off so she wouldn’t have to rehire him, as required by law. Ramsey made up stories that he’d accosted the judge, Yarter said.

Yarter said officers supported Ramsey when she was elected in 2011 and she didn’t live up to her promise.

The complaint also contends city Chief of Staff Ryann Juden — whose name is misspelled throughout the complaint — threatened to send out a mailer of “half-truths,” saying “the ‘low information voters’ are not going to know the difference.”

A similar recounting of this alleged meeting is detailed in ethics complaints filed by two, now laid-off, human resources employees.

Juden also said he’d get the lawsuit the city refused to defend the judge against dismissed if she resigned, according to the complaint. That lawsuit involved a former city employee.

In addition to listing a host of allegations of city conspiracies against her, the judge also details several allegations about how the petition doesn’t pass muster.

Among them, that the secretary of state erred in qualifying the recall’s petition because the random sample of signatures found 84 percent of them were valid when the law requires 90 percent.

This is Ramsey’s second effort to get a judge to toss the recall petition against her. Her first court challenge contends judges, while elected, can’t be recalled by the public in Nevada. Mueller said they had to file two petitions because the law required a challenge to the recall petition be filed within five days and the first lawsuit wasn’t a formal challenge.

Thomas said whether the recall election goes forward will be decided by the courts and he’s confident the recall will be successful in the end.

The recall’s financial backers are mostly city workers, according to Thomas, though he has yet to provide a list of those contributors for news stories, despite twice saying he would.