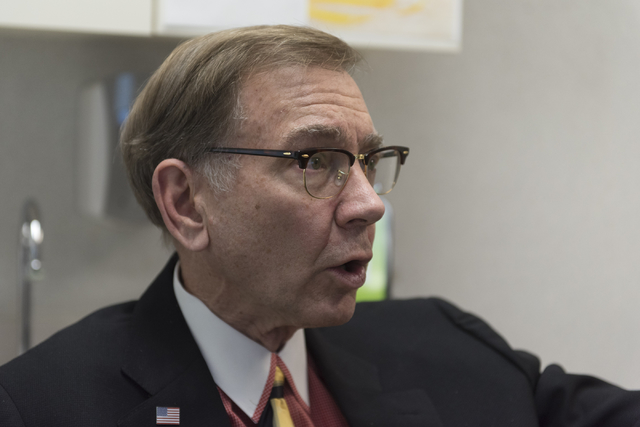 The CO-OP is one of 23 nonprofit carriers nationwide written into the Affordable Care Act — also called Obamacare — to create consumer-driven, locally based health plans for state insurance exchanges. The sponsors, which include the Culinary Local 226’s Health Fund and its national parent, UNITE HERE Health, won $65.9 million in federal startup loans in 2012 to start the nonprofit.

The launch hasn’t been trouble-free.

Comprehensive Cancer Centers has abandoned the CO-OP’s network because it was taking as long as 60 to 90 days to get reimbursed for services, said medical oncologist and practice President Dr. James Sanchez. The industry norm is 32 to 33 days, he said.

“It was long enough that it was just not something that was conceivable for our business to survive on,” Sanchez said.

CO-OP officials responded that the vast majority of their claims are paid quickly, and Comprehensive Cancer Centers is being “completely un­reasonable.”

“What is it, July? We started to get members in January,” said Tom Zumtobel, Nevada Health CO-OP’s CEO. “What’s two or three times longer (to pay claims)? I’m not trying to be a smart aleck, but it’s too early in the game for them to be reacting the way they’re reacting.”

He also said the practice’s decision violates its obligation to stay until the end of its contract in 60 days.

“This is no way to treat patients,” Zumtobel said.

The move does not affect CO-OP members actively receiving chemotherapy, radiation therapy or other treatments through Comprehensive Cancer Centers. But new referrals, as well as patients in follow-up or just getting labwork done, must find other options. The practice also has financial counselors to help patients figure ways to pay for treatment.

The change could affect thousands.

What’s more, Nevada Health CO-OP enrolled 37 percent of the 38,000 Nevadans who bought coverage through Nevada Health Link. Based on those numbers, more than 14,000 people have exchange coverage with the CO-OP.

Exchange spokesman CJ Bawden said consumers who enroll in plans through the marketplace still have options for cancer care.

“All plans have to deliver network adequacy, and they all do have oncology treatment,” Bawden said.

Other exchange insurers have contracts with HealthCare Partners and Cancer and Blood Specialists.

Bawden noted that another carrier, Time Insurance Co., will market plans through Nevada Health Link in 2015, and that will mean still more choices.

Zumtobel said the CO-OP has other oncologists in its network, but the insurer will have to add more cancer doctors to offset the loss.

The reimbursement tangle isn’t the first struggle for the CO-OP. Nor is it the first time Comprehensive Cancer Centers has had issues with the insurer.

Consumers complained in January that the CO-OP’s provider lists didn’t match rosters on record with Nevada Health Link. Comprehensive Cancer Centers appeared in the CO-OP’s directory for more than four months before it actually joined, confusing its patients.

The CO-OP sorted out its 2,000-member network by spring — just in time to find that exchange contractor Xerox had mistakenly placed a consumer with $407,000 in medical bills into one of its plans.

That case was resolved, but waiting months for payment made pulling out of the CO-OP’s network a financial necessity, Sanchez said.

“It’s like being a bank. You loan out money, and if people don’t pay you back, it’s difficult to run a business and stay solvent,” Sanchez said. “We need to be there for the rest of our patients.”

Delays can happen on claims for more “sophisticated” treatments that require additional research for reimbursement — a common issue for complicated cancer drugs, Zumtobel said. But he added that hasn’t stopped the insurer from paying the practice $500,000 in reimbursements since January.

He said the CO-OP also agreed to quarterly meetings with Comprehensive Cancer Centers to discuss any concerns. At the most recent meeting, in April, the practice’s managers didn’t signal any trouble, Zumtobel said.

“We are a startup. We have had a really steep learning curve with the exchange for the first couple of months, identifying if our (members) were even covered,” he said. “We’ve met with other doctors if their payments were slow, and offered to pay them cash in advance. You just have to be willing to work things through.”

“We’re financially strong. We don’t have money problems,” he said. “We’re doing a good job paying claims, but we have a few things we have to work through.”

Even Sanchez said the CO-OP could have a future.

“This is not to say (the CO-OP) is not going to be a good project,” he said. “It just may take time to straighten out operations to be efficient and effective.”