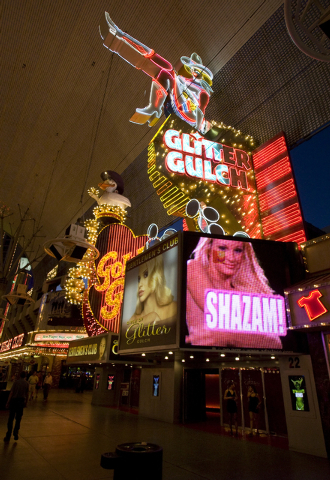 A preliminary settlement involving casino owner Steve Burnstine hinges on whether the city can allow an easement of an alley so Burnstine’s strip club, the Girls of Glitter Gulch, can have a bar that wraps around his club. (Las Vegas Review-Journal File)

A preliminary settlement involving casino owner Steve Burnstine is expected to culminate with him dismissing his lawsuit against the Fremont Street Experience and the city of Las Vegas.

But he still has wiggle room to keep his 4-year-old lawsuit alive.

One aspect of the case was resolved Wednesday when the Las Vegas City Council unanimously approved an ordinance allowing “up to two qualifying bars” outside a gaming establishment on the Fremont Street Experience. The ordinance also grandfathered in the Golden Gate and Binion’s, which have two outdoor bars on the mall.

The settlement agreement hinges on whether the city can allow an easement of an alley so Burnstine’s strip club, the Girls of Glitter Gulch, can have a bar that wraps around his club.

If the alley contains water lines or telephone lines that cannot be moved — and that is unknown — then it’s uncertain what will happen, according to his spokesman Mark Brown.

“The lawsuit will go on then,” he said.

Consultant Terry Murphy, representing the Fremont Street Experience, said, “We only have control over our own behavior, and we have been honest and forthright in negotiations.”

City Attorney Brad Jerbic, who worked hard trying to resolve the lawsuit, told the council “the matter is resolved today.”

Jerbic acknowledged Burnstine doesn’t want to dismiss the case unless the easement issue is resolved.

The lawsuit challenges the right of mall managers to restrict his three businesses and accuses the city of denying him rights by allowing the mall to operate the mall.

Burnstine, owner of Mermaids and La Bayou, already has outside bars fronting the Fremont Street Experience on his own property but not actually on the mall.

The ordinance that passed would allow him to install a bar on his own property in front of the Girls of Glitter Gulch. Prior to this, strip clubs weren’t allowed to take such action.

In March, Burnstine gave up his gaming license for his strip club but kept them for his two casinos. Brown said customers coming to the topless club weren’t there to play slots, so gaming was unprofitable there.

District Judge Betsy Gonzalez, who is hearing Burnstine’s case, will be updated on the developments today.

The results are that one bar on the mall still has to have approval of Fremont Street Experience and a second bar needs the council’s approval.

Throughout the morning, more than 20 people were in and out of the council chambers to discuss the ordinance and quietly huddled in the back negotiating. Highly paid attorneys and lobbyists as well as casino owners sat as a bloc on one side of the chambers while the negotiations went back and forth.

Burnstine’s attorney, Jim Jimmerson, predicted it could take 90 days to determine whether the city could grant an easement to allow an L-shaped bar between the strip club and the Las Vegas Club. If it works, another ordinance allowing a bar outside the topless club will be introduced.

Asked how much this lawsuit has cost city taxpayers, Jerbic said he had no estimate because it was handled by his office and no outside attorneys were hired.