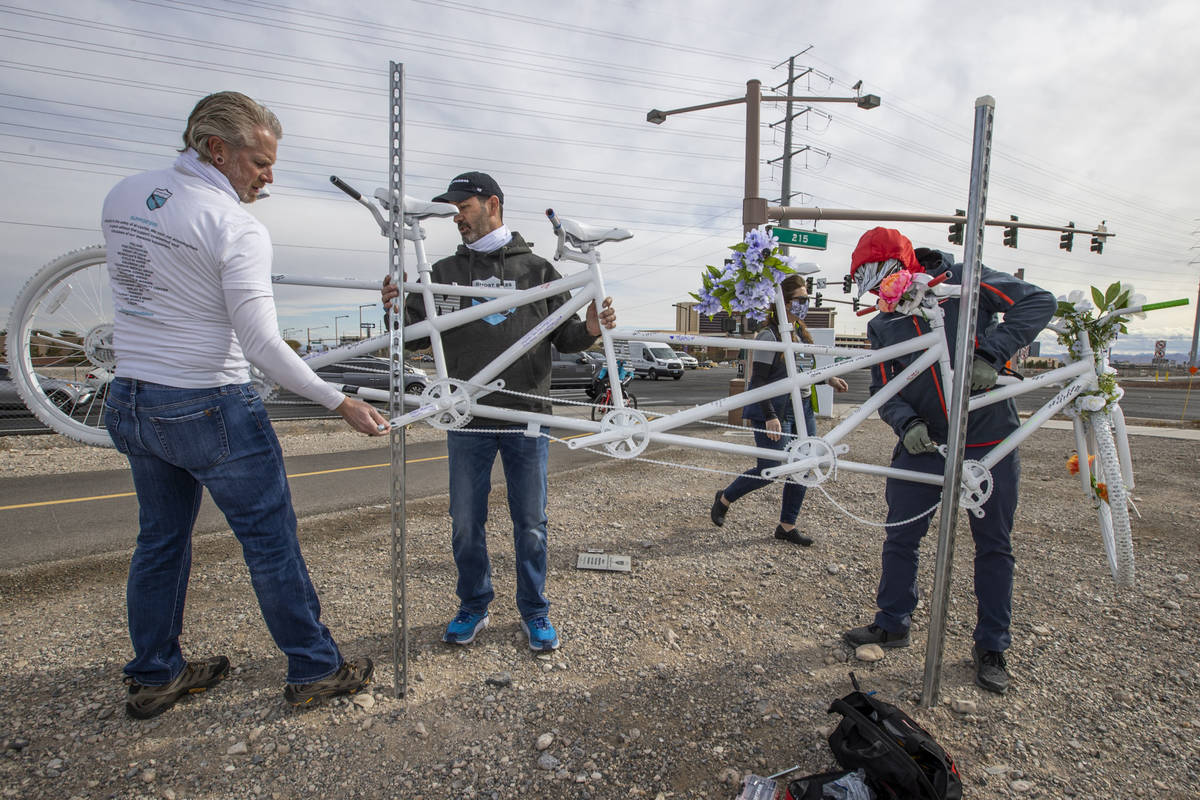 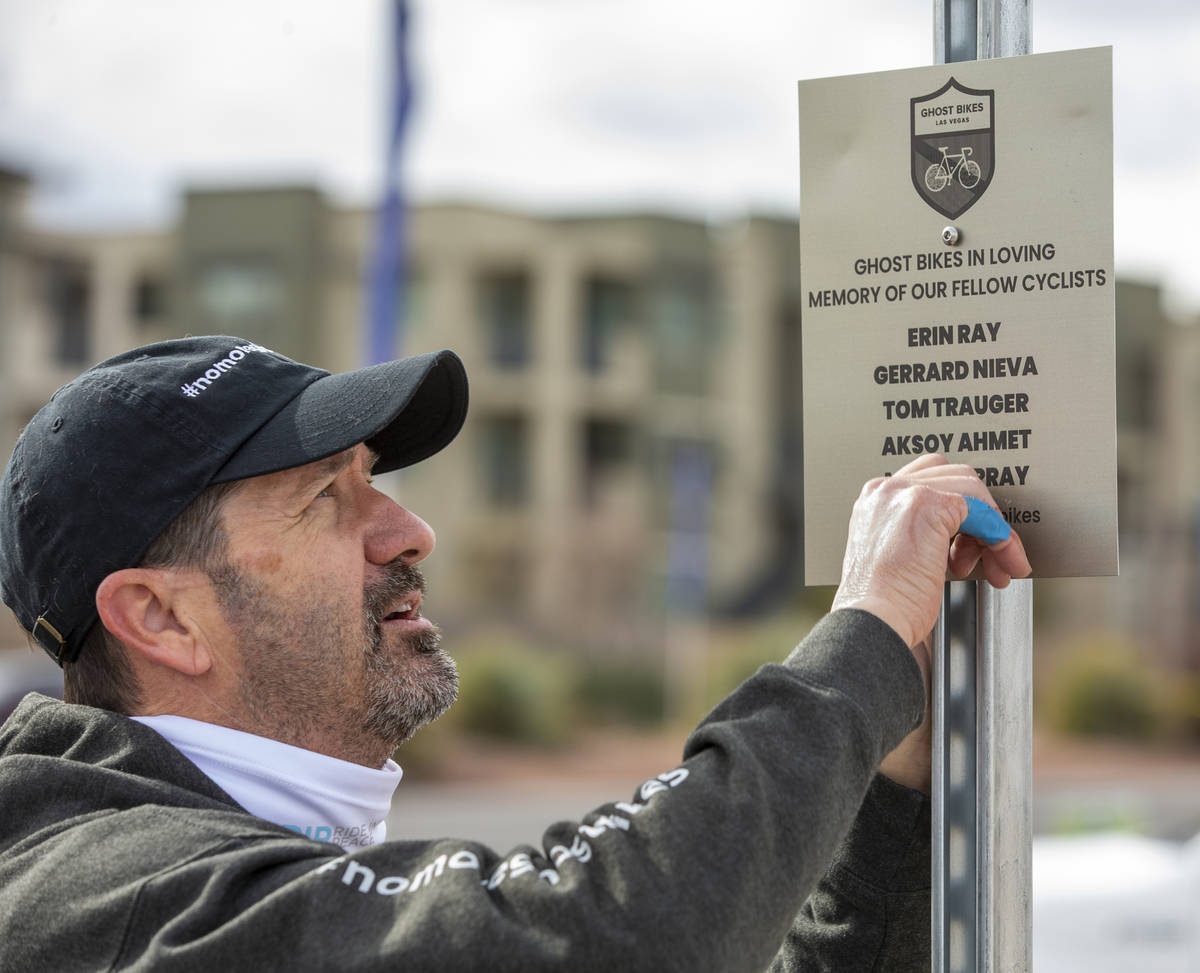 In this Jan. 23, 2021, file photo, Pat Treichel with Ghost Bike Las Vegas hangs a sign above the newly mounted bike near the intersection of W. Charleston Blvd. and the I-215 following the LV5 Ghost Bike Unveiling & Memorial adjacent to the Las Vegas Ballpark in Las Vegas. (L.E. Baskow/Las Vegas Review-Journal) @Left_Eye_Images 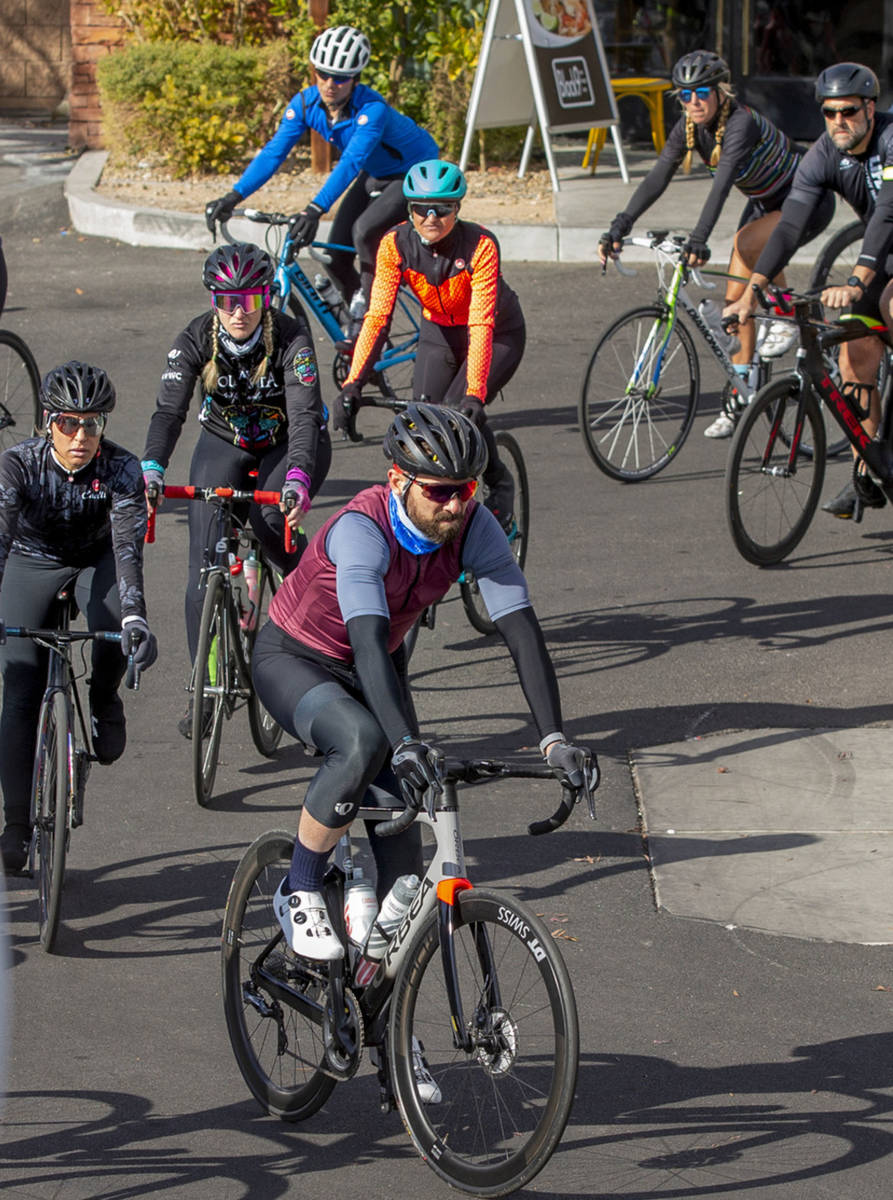 In this Dec. 12, 2020, file photo, cyclist do a ride-by tribute during a vigil honoring the lives of five Las Vegas cyclists who lost their lives in a recent fatal accident being held at Las Vegas Cyclery in Las Vegas. The event was organized by by Ghost Bikes, Save Red Rock and supported by other organizations as well. (L.E. Baskow/Las Vegas Review-Journal) @Left_Eye_Images

Las Vegas cycling advocates are fighting for increased safety measures in the wake of a December crash on a rural stretch of Nevada highway that left five bicyclists dead.

Pat Treichel, co-founder of Ghost Bikes Las Vegas, said the group is working with the Las Vegas City Council and local law enforcement on public safety announcements to help educate drivers about laws in place to protect bicyclists. He said he was impressed with a laser-equipped bike the Metropolitan Police Department introduced in late December to enforce Nevada’s “3-foot rule,” which requires that drivers give cyclists adequate room on the road.

Clark County Commissioner Justin Jones introduced an ordinance Tuesday that would remove the requirement for cyclists to have bells on their bikes and assert their right to ride in travel lanes, as long as they travel at an appropriate speed. The item is set to be discussed at the next commission meeting on Feb. 16.

Treichel said he thinks the ordinance is a good start at clarifying some of the gray area surrounding cyclists’ rights on roads, and he’s hoping to see more signs in place to remind drivers that cyclists are allowed to be in travel lanes.

There were 10 bicyclist deaths in Nevada in 2020, including eight in Clark County, one in Carson City and one in Nye County. There were seven fatalities recorded in 2019, according to the state Office of Traffic Safety.

Federal transportation safety agents and the Nevada Highway Patrol are still investigating the Dec. 10 crash on U.S. Highway 95 south of Boulder City. In a report published last week, the National Transportation Safety Board said a post-crash inspection of the box truck that plowed into a group of cyclists showed no evidence of vehicle conditions that could have been a factor in the wreck.

Jordan Barson, the truck’s driver, tested positive for methamphetamine in his system after the crash, according to his arrest report. The 45-year-old told officers as they arrested him at his Kingman, Arizona, home on Dec. 16 that he fell asleep at the wheel.

The U.S. Department of Transportation’s Federal Motor Carrier Safety Administration said in December that Barson and Roadrunner Transport, the Arizona company responsible for the truck Barson was driving, “may be subject to a civil penalty enforcement proceedings brought by FMCSA for violations of the Agency’s safety regulations.” The agency said Tuesday that the investigation is ongoing.

At the close of the NTSB investigation, the agency could issue safety recommendations to prevent similar crashes, the report noted.

Treichel said at the unveiling that the memorial, a five-person tandem bicycle painted white, will be temporarily displayed near the Beltway 215 and Charleston Boulevard for drivers and bicyclists to remember the lives lost in the crash.

The organization is planning to place five more bicycles at the site of the crash.