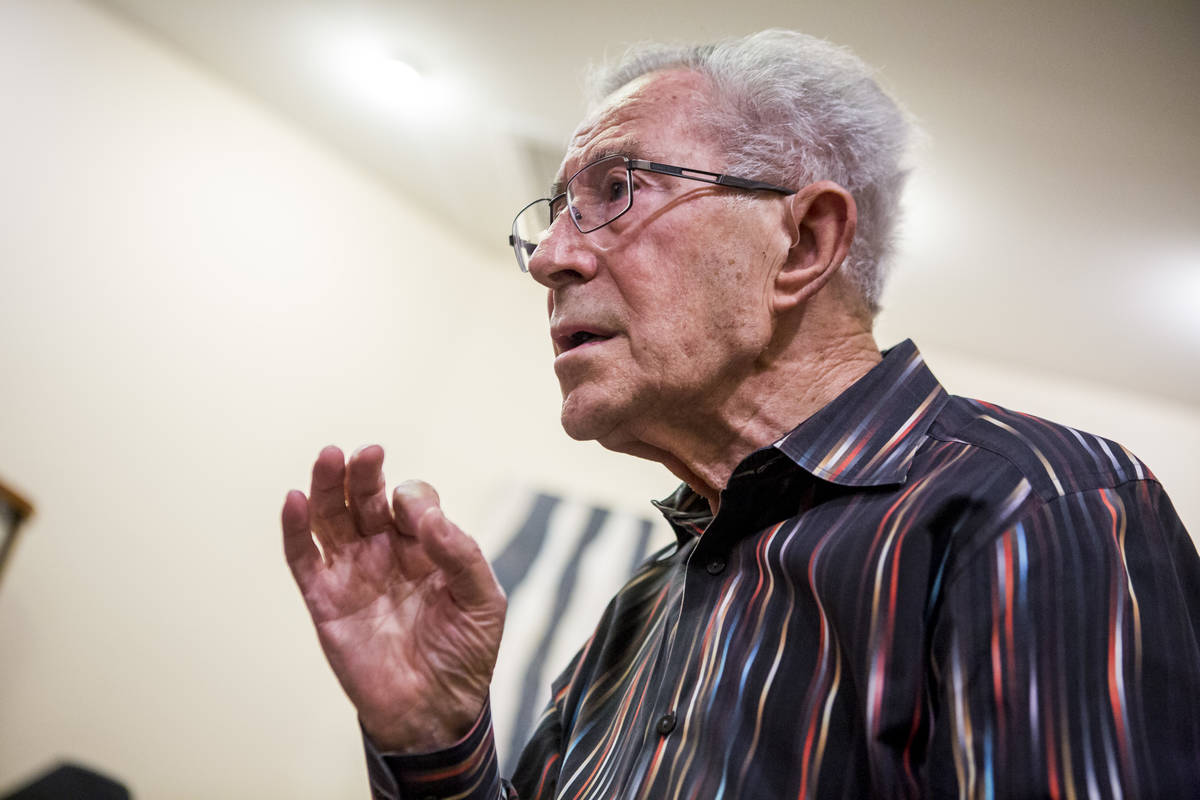 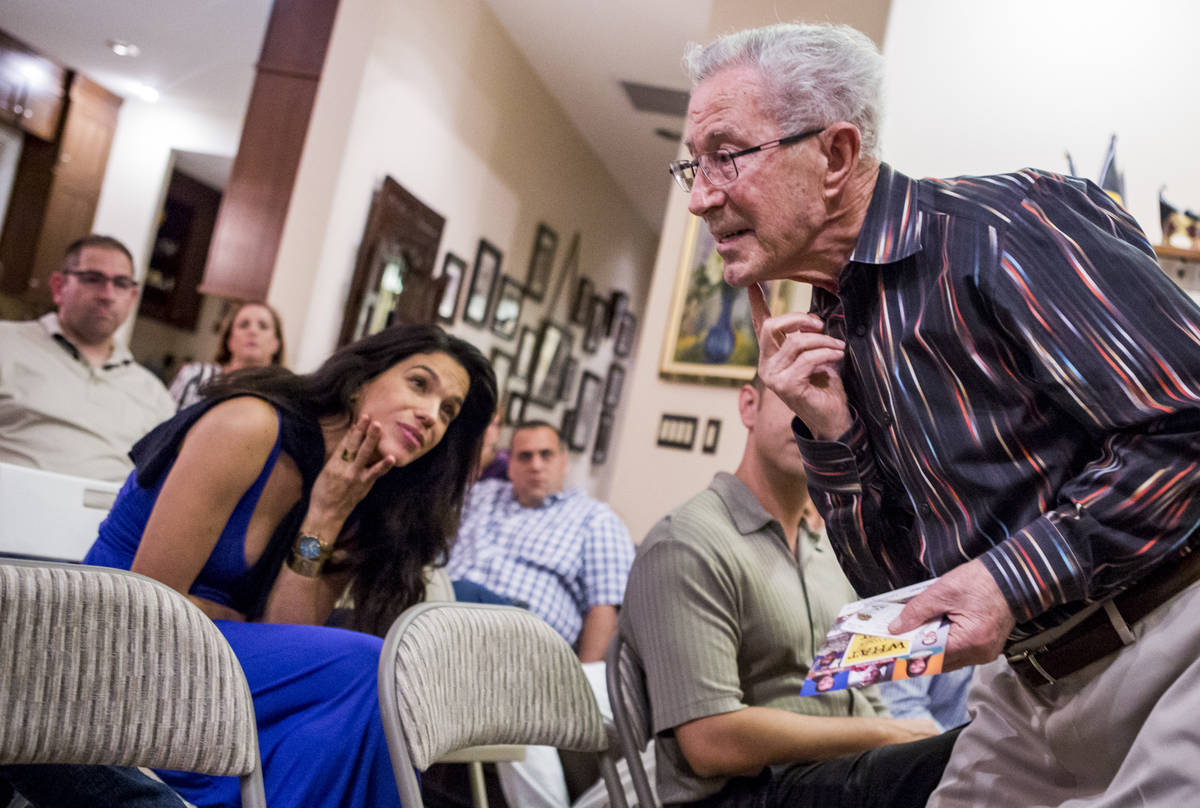 Ben Lesser, a 91-year-old Holocaust survivor, shows where he was stabbed in the chin while on a concentration camp train during a Yom HaShoah, or Holocaust Rememberence Day, event at a Summerlin home on Wednesday, April 11, 2018. (Review-Journal file photo) 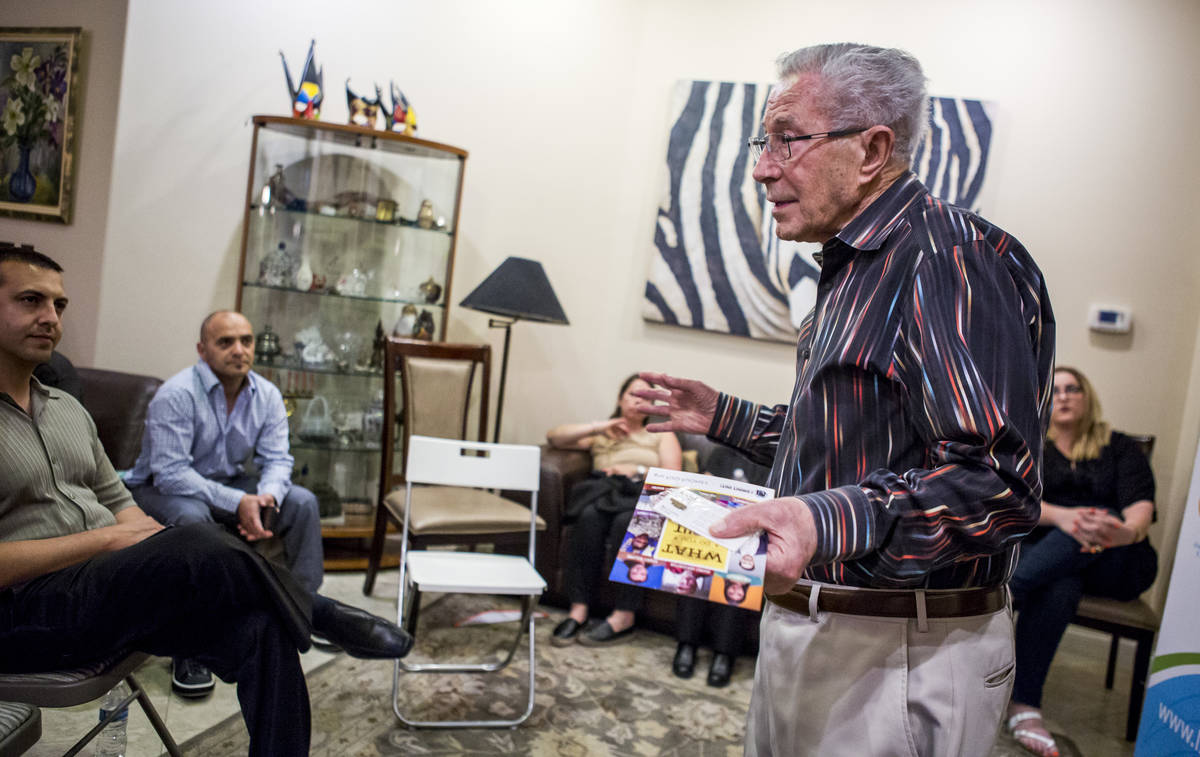 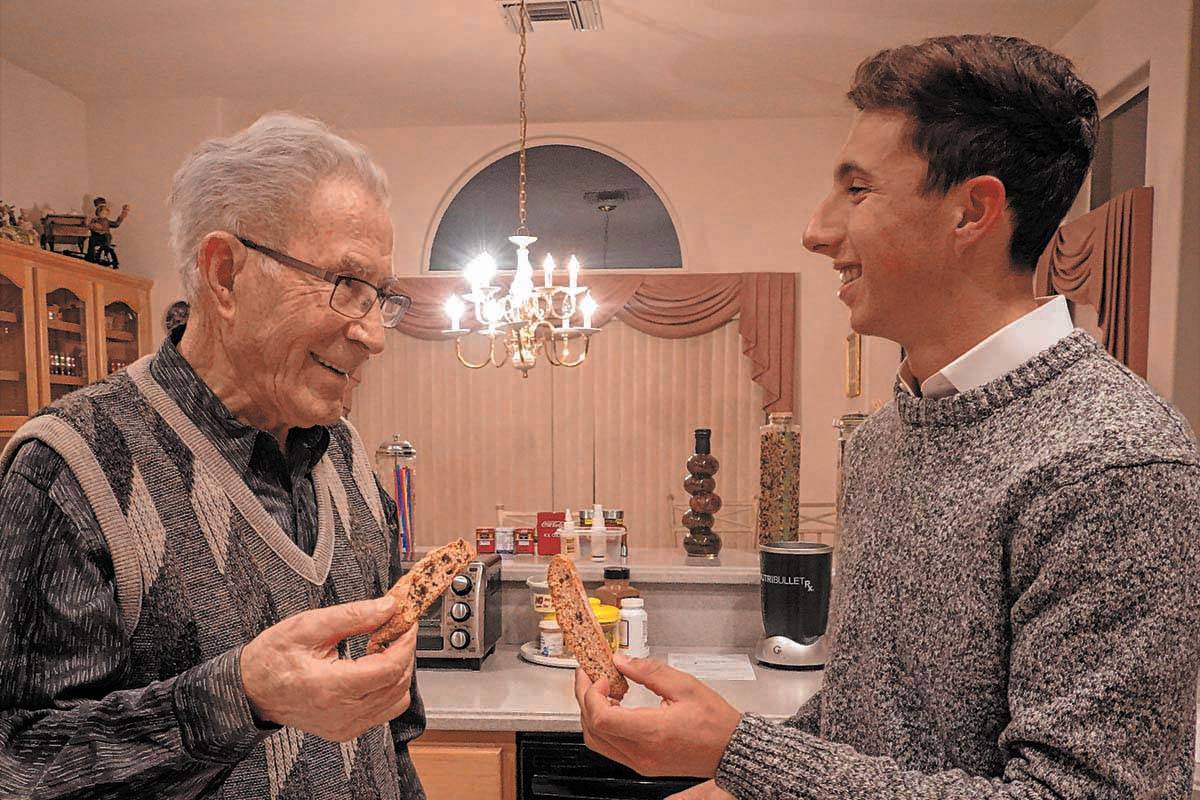 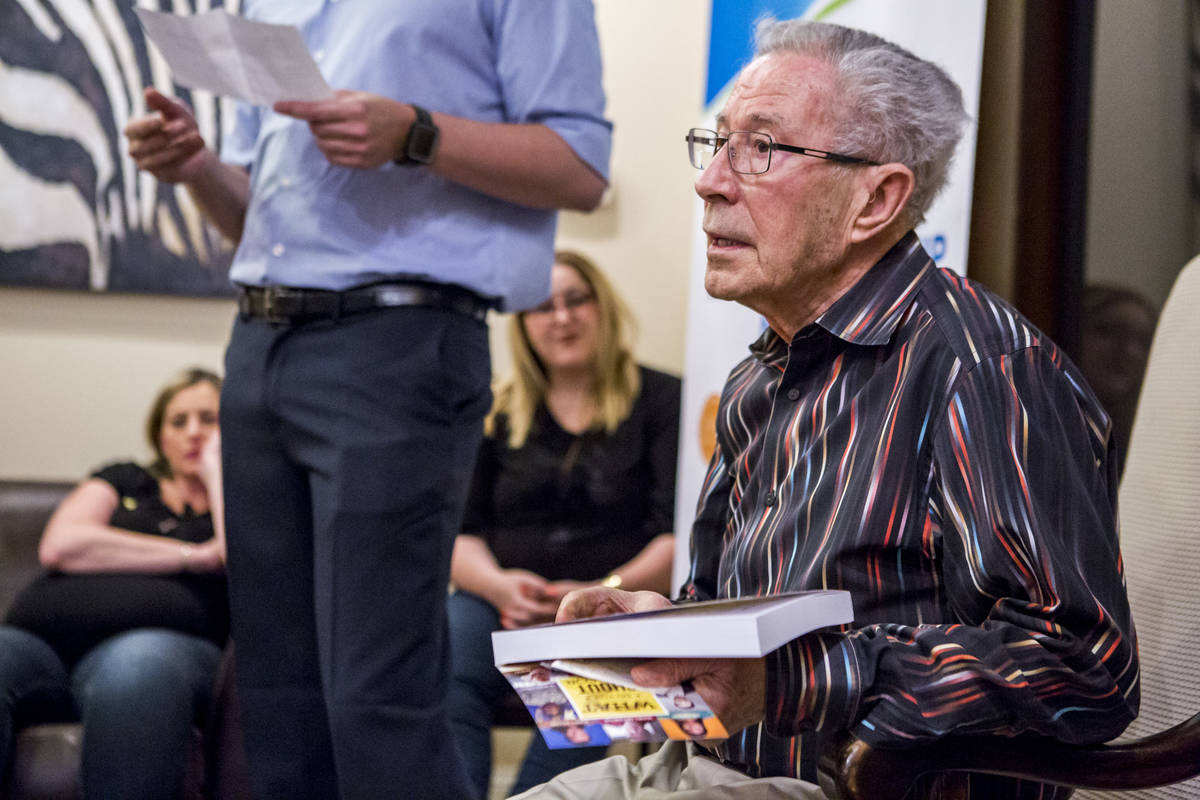 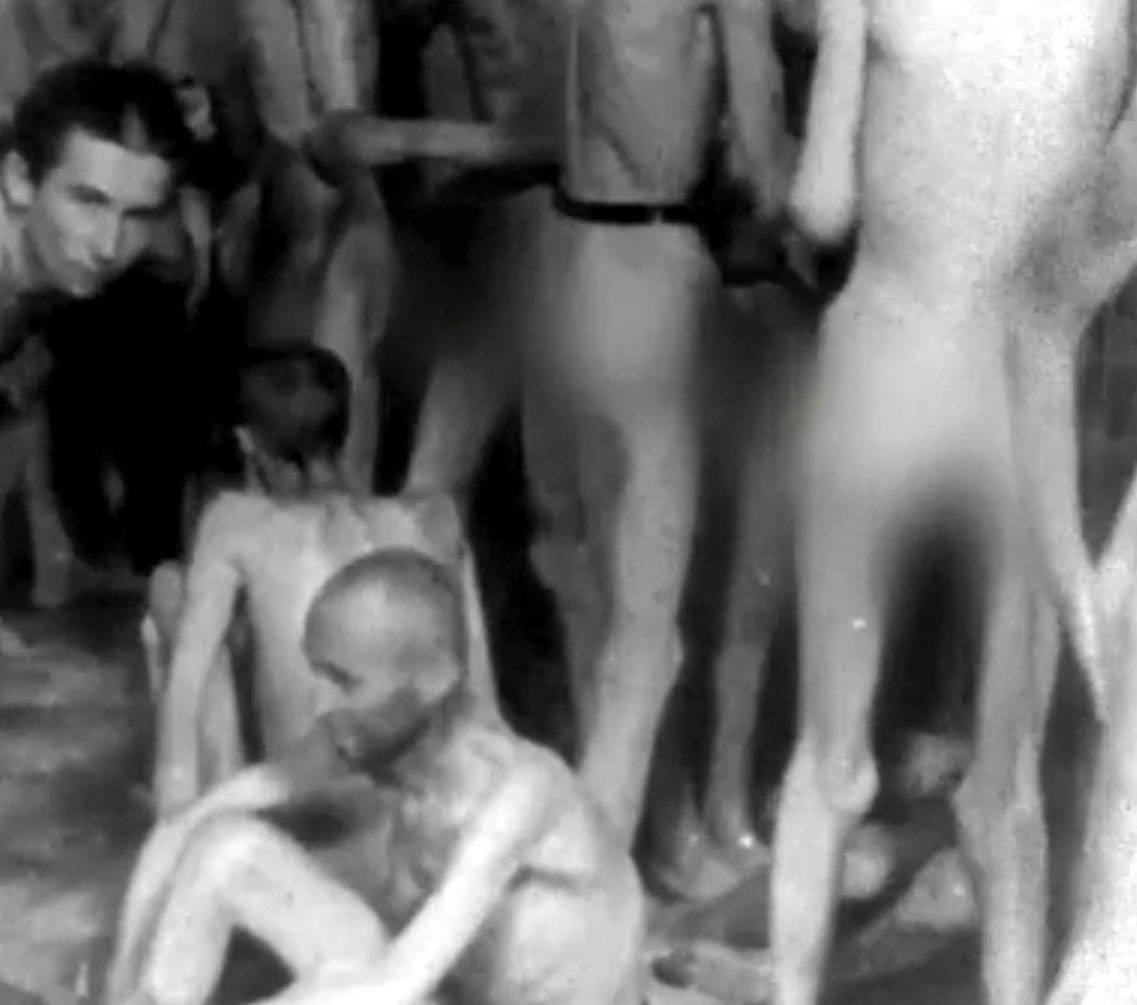 This still from a film taken during World War II shows, at far left, a dark-haired man who might be Las Vegas Holocaust survivor Ben Lesser. (Courtesy photo)

Southern Nevada Holocaust survivor Ben Lesser has told his story many times and in many ways.

Those include through his memoir, “Living a Life That Matters: From Nazi Nightmare to American Dream,” testimonies with the USC Shoah Foundation and the United States Holocaust Memorial Museum, his nonprofit Zachor Holocaust Remembrance Foundation and through presentations to thousands of people over the past 25 years.

This week, Lesser unveiled a new way to teach lessons of the Holocaust: through a virtual image of himself, which allows online visitors to ask questions and receive answers in Lesser’s voice.

Lesser, 91, was born in Krakow, Poland. During World War II, he was imprisoned in Auschwitz-Birkenau, Durnhau labor camp, Buchenwald and, finally, in Dachau, from which he was liberated. Of seven family members, only Lesser and a sister survived the Holocaust.

On Yom HaShoah, or Holocaust Remembrance Day — which began at sundown Monday and ends at sundown Tuesday — Lesser usually fulfills a dizzying schedule of talking to school and community groups. This year, though, the coronavirus epidemic caused the cancellation of an extended speaking engagement in Germany.

So Lesser is directing people who would have seen him in person to his new virtual likeness, which can be accessed through the Zachor Foundation website (zachorfoundation.org).

StoryFile created the technology — Lesser’s likeness also can be accessed through its app — and company founder and CEO Heather Maio-Smith said a version that will allow anybody to create a similar interactive scene will be released for iPhones at the end of May.

Maio-Smith, who worked on Holocaust exhibits and presentations, said she noticed that whenever a Holocaust survivor told his or her story to a live audience, “you could hear a pin drop.” When a question-and-answer session began, Maio-Smith said, the audience “engaged in a completely different way.”

The USC Shoah Foundation pioneered a similar technology to create images of 24 Holocaust survivors for its “Dimensions in Testimony” initiative. While none of those are from Nevada, there are 73 survivor testimonies on film or video that were recorded in Nevada that are housed in USC Shoah Foundation’s Visual History Archive.

Maio-Smith said her goal was to make similar interactive technology available to everyone.

Lesser was one of the first Holocaust survivors to be interviewed for StoryFile over three days in which he answered 450 questions about his life and experiences during the Holocaust.

Lesser considers his virtual likeness another vehicle for educating others. Because it’s free to use and accessible to anyone, he hopes parents and children will use it to teach and learn about the causes and consequences of the Holocaust.

“I feel that survival has thrust upon me a mission to keep the story alive, to keep the world from acquiring amnesia,” he said. “That is what I have been doing the last 25 years.”

His primary lesson: “That the Nazis and Hitler didn’t start with killing. It started with hate, and bullying is a form of hatred, and it can make even an ordinary, educated, civilized, cultured people become murderers.”

Lesser hopes the program will reach young people in particular, whom he calls “the last generation to have access to a survivor. They are witnesses to the truth. They have to take on the responsibility and make sure the story and lessons will live after we are gone.”