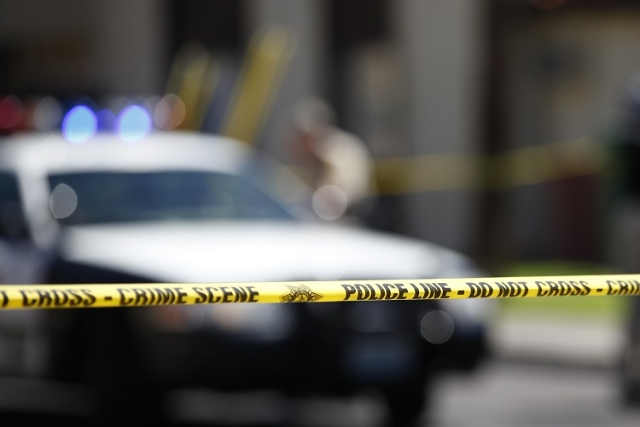 Las Vegas police investigate the scene where a women was shot on the 1000 block of Sierra Vista Drive, near Maryland Parkway and Desert Inn Road, in Las Vegas on Wednesday, Sept. 3, 2014. The woman was taken to Sunrise Hospital and Medical Center with undisclosed injuries. (Chase Stevens/Las Vegas Review-Journal)

Las Vegas police said a man stabbed and kidnapped his wife when she said she would leave him.

Luis Garcia, 31, was booked into Clark County Detention Center without bail Wednesday to face charges that include sexual assault and attempted murder with a deadly weapon.

Police have said the man, identified only as Luis in a redacted Metro arrest report, was arguing with his wife as he was driving to a grocery store Nov. 5. The woman told Garcia she was going to leave him and take the kids with her.

Police say the man took the woman home and attempted to bandage the wounds.

The man stayed home from work Nov. 6. The woman could not walk on her own and had to be helped to the bathroom, where she was punched in the face, threatened and restrained with duct tape. The following day she was sexually assaulted, according to the report.

The woman told police that her husband had a “crazy look on his face,” according to the report.

It wasn’t until Nov. 11 that the woman could walk on her own. The report said she took the children, fled to a friend’s house and called the police.

Garcia was arrested near his home the same day. The report said he refused to be interviewed without a lawyer present. Officers obtained a search warrant and collected a roll of tape and a DNA sample from the man. The report also said police found blood in the man’s vehicle.

Detectives were unable to find the knife, the instruments used during the sexual assault or any bedding with blood on it, the report said.

Garcia is scheduled for a preliminary hearing Dec. 14.