Here are your Tuesday morning headlines:

1. The Raiders are coming to Vegas. NFL owners approved the move with a 31-1 vote, with the Miami Dolphins with the only dissenting vote. Roger Goodell said in yesterday’s press conference that the plan was for the Raiders to stay in Oakland until a stadium was built in Vegas, but Alameda County politicians are looking to break a lease with the Raiders and force them from the city.

2. A Henderson middle school teacher was arrested Monday on three counts of unlawful contact with a minor. Gregory Beasley taught math at White Middle School and police responded after students said Beasley made them feel uncomfortable, threatened or harassed. This is the ninth teacher arrest within the Clark County School District since July 1st.

3. President Donald Trump signed a bill Monday killing a federal rule on public land planning in Western states, including 47.5 million acres in Nevada. Trump said he wanted to “remove every job-killing regulation we can find.” Senator Dean Heller cosponsored the bill and Senator Catherine Cortez Masto voted against the bill. 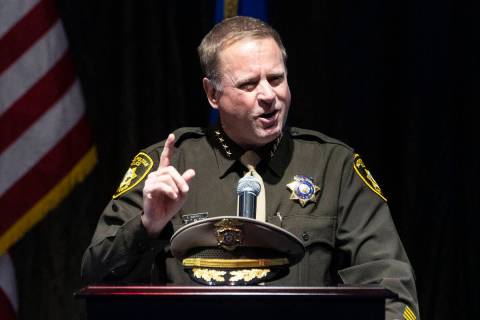 Sheriff Kevin McMahill to deliver State of the Department address

Twin tappers Sean and John Scott tear it up in ‘Absinthe’