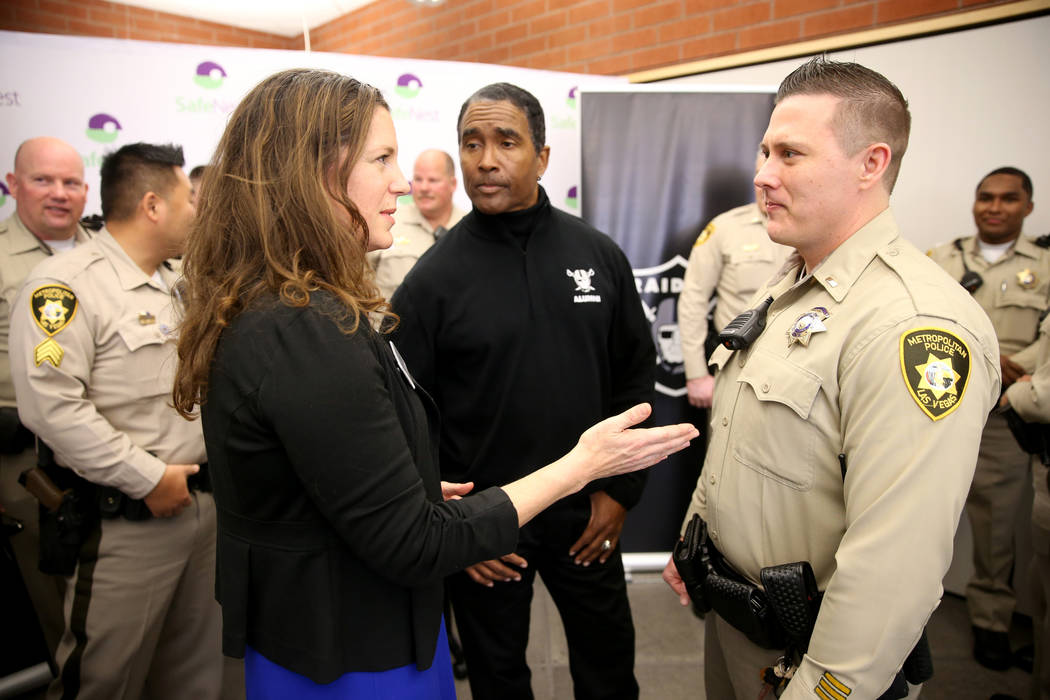 Following a year that saw a dramatic decrease in homicides for Clark County, Las Vegas police are expanding a program designed to reduce domestic violence killings.

SafeNest, an organization that supports victims of domestic violence, announced Monday that the program will now be in use by all Metropolitan Police Department area commands.

When police officers are called to domestic violence reports, advocates from SafeNest are also dispatched to scenes so volunteers can speak with victims in person, make a plan for their safety, or help them fill out an emergency temporary restraining order, SafeNest CEO Liz Ortenburger said.

Project Safe 417, named after the police code for domestic violence, started a pilot phase in December 2017. It began in Metro’s northwest area command before being expanded six months ago to the Bolden and Spring Valley area commands.

Starting Monday throughout all Metro area commands, after domestic violence arrests made between the hours of 5 p.m. and 3 a.m., volunteers on scene will be there to meet with the victims and listen.

“Everything that we do is a victim’s choice, so if a victim says, ‘Yes, I’d like you to follow up with me,’ then great,” Ortenburger said during an interview Friday. “We allow the victims to make those choices.”

She said the program is being expanded because of the success it’s seen in the northwest valley. Metro announced in January 2019, when the program was first publicized, that in 2018 the northwest area command had seen no domestic-related homicides.

The year before, the same area had six.

“It was automatically just magical,” Metro Capt. Sasha Larkin said during a January 2019 news conference on the program’s success.

Ortenburger on Friday didn’t have data available for domestic homicides in the northwest in 2019, but records maintained by the Review-Journal indicate the northwest area command saw three domestic-related homicides last year.

Throughout the valley, domestic-related homicide was the top reason for killings in 2019, with 38 of the 142 homicides in all of Clark County being domestic-related — meaning the suspected killer was a family member, romantic partner or roommate — according to Review-Journal records.

Nevada has traditionally had very high domestic-related homicide numbers, with 85 percent of the state’s domestic violence killings happening in Clark County, Ortenburger said. She said the expansion of Project Safe 417 will help push toward her goal of eliminating domestic-violence homicides in the county.

The most dangerous time for victims is the period from when a victim is deciding to leave a violent relationship until up to a year after the victim has left, Ortenburger said. It’s when victims are most likely to be killed.

By reaching victims at scenes when their potential abuser is being arrested, volunteers can start planning how to keep the victim safe, Ortenburger said.

“Preventing the epidemic before it strikes has got to be on our radar,” she said.

Stopping domestic-violence related homicides is also a public safety concern, Ortenburger said, because many mass shooters or those involved in workplace violence have a history of domestic battery.

“We’re not only making the household safer, we’re making the community safer,” she said. “That’s what separates us from other other agencies.”

To ensure the safety of the volunteers, SafeNest advocates only respond to scenes when Metro officers are present and an arrest is being made or officers have probable cause to arrest someone who may have fled. If officers are forced to leave the area for another scene, the volunteer will continue speaking with the victim over the phone.

Ortenburger said the advocates help “provide that sort of soft landing after an incredibly traumatic event.”

Depending on if SafeNest successfully secures more funding for the program, Ortenburger said she hopes to expand it so that volunteers will work 24 hours, seven days a week, with police across all of Clark County.

Between 13,000 and 14,000 domestic violence felony and misdemeanor charges move through the Clark County courts every year, Ortenburger said. She emphasized that domestic violence is an “epidemic” in Southern Nevada and nationally, but that programs like Project Safe 417 have made a difference.

“When I got the first year of results and saw that we were actually bringing the homicide rate down, I cried,” she said. “This is why we do this work. It’s not always that in a large epidemic like this you get to see major elements of change.”