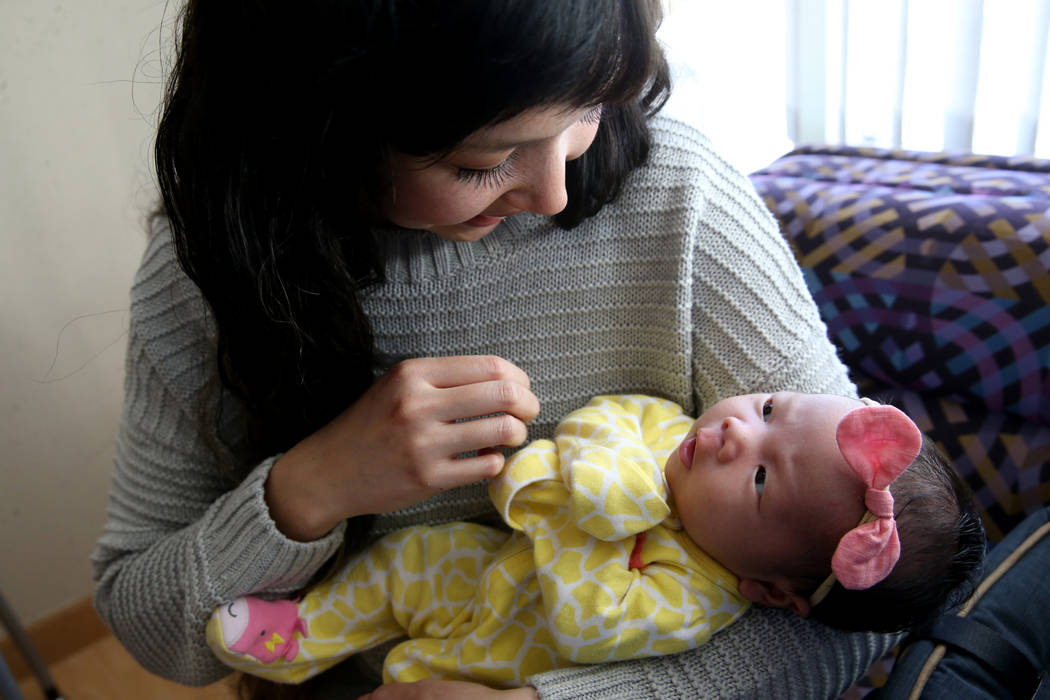 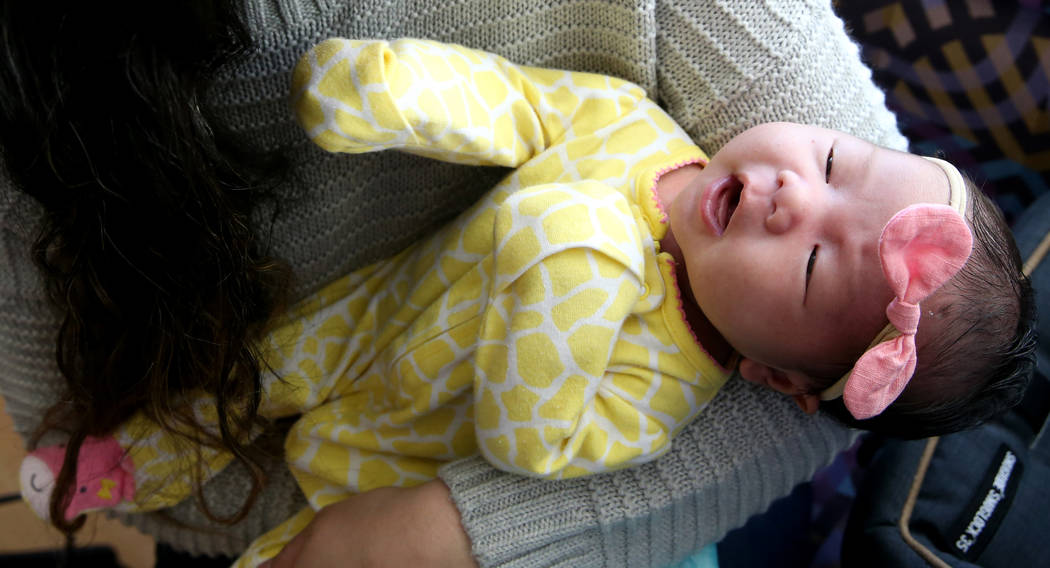 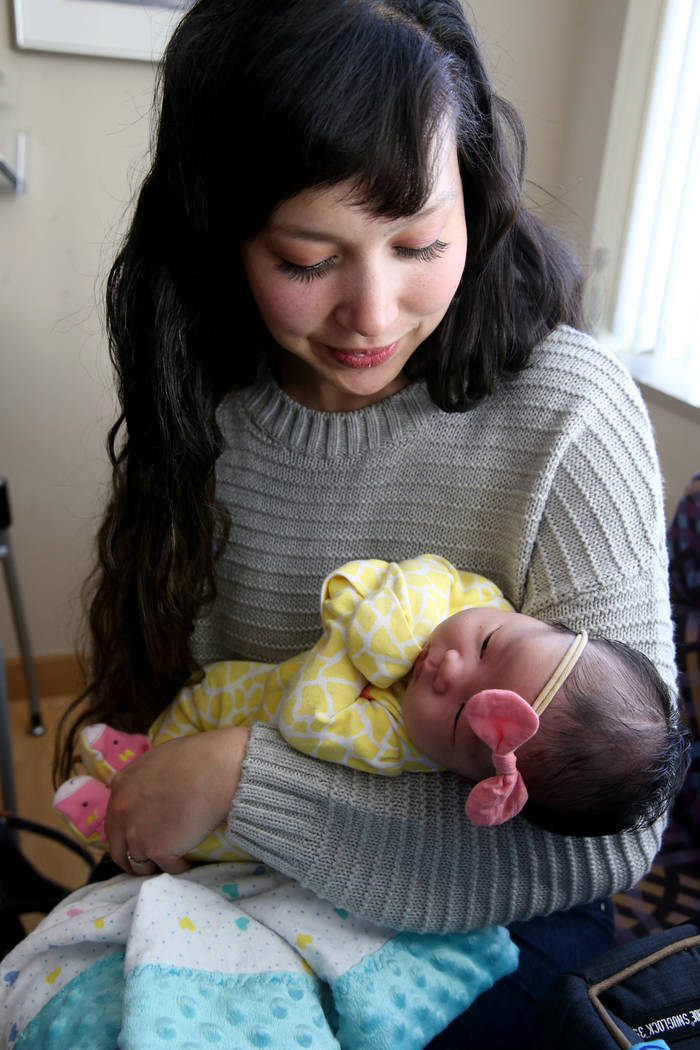 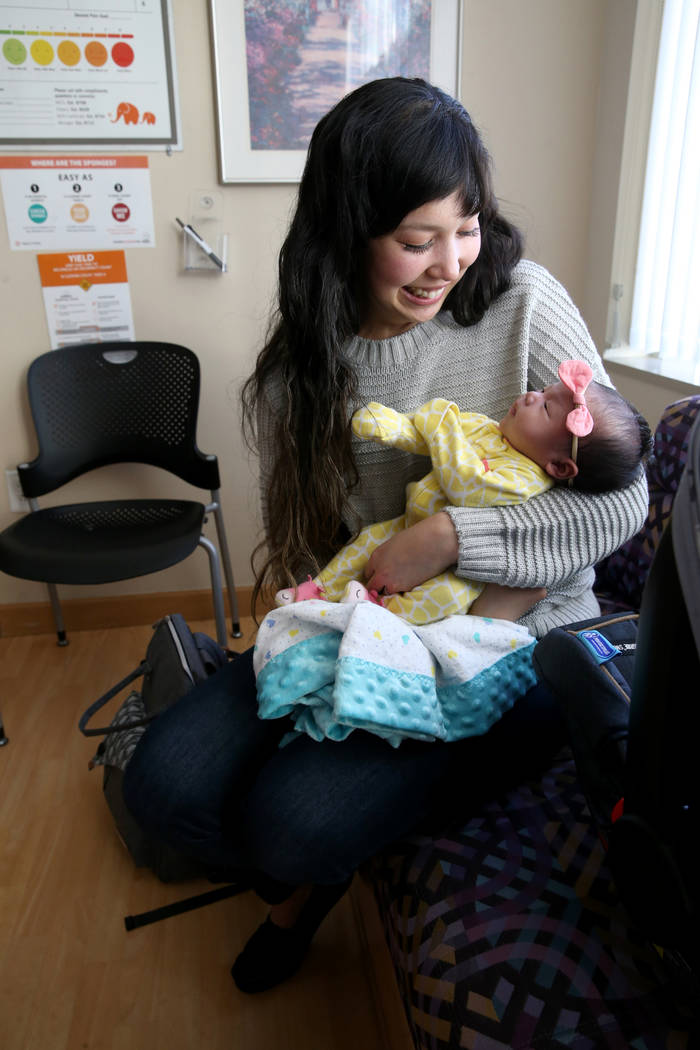 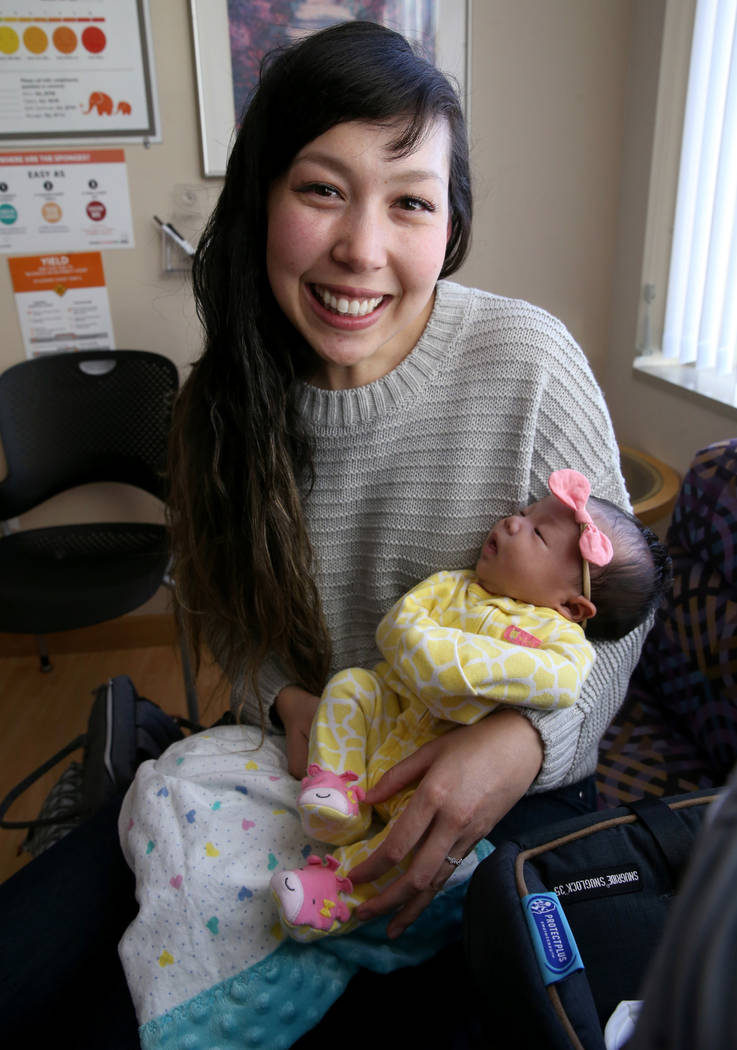 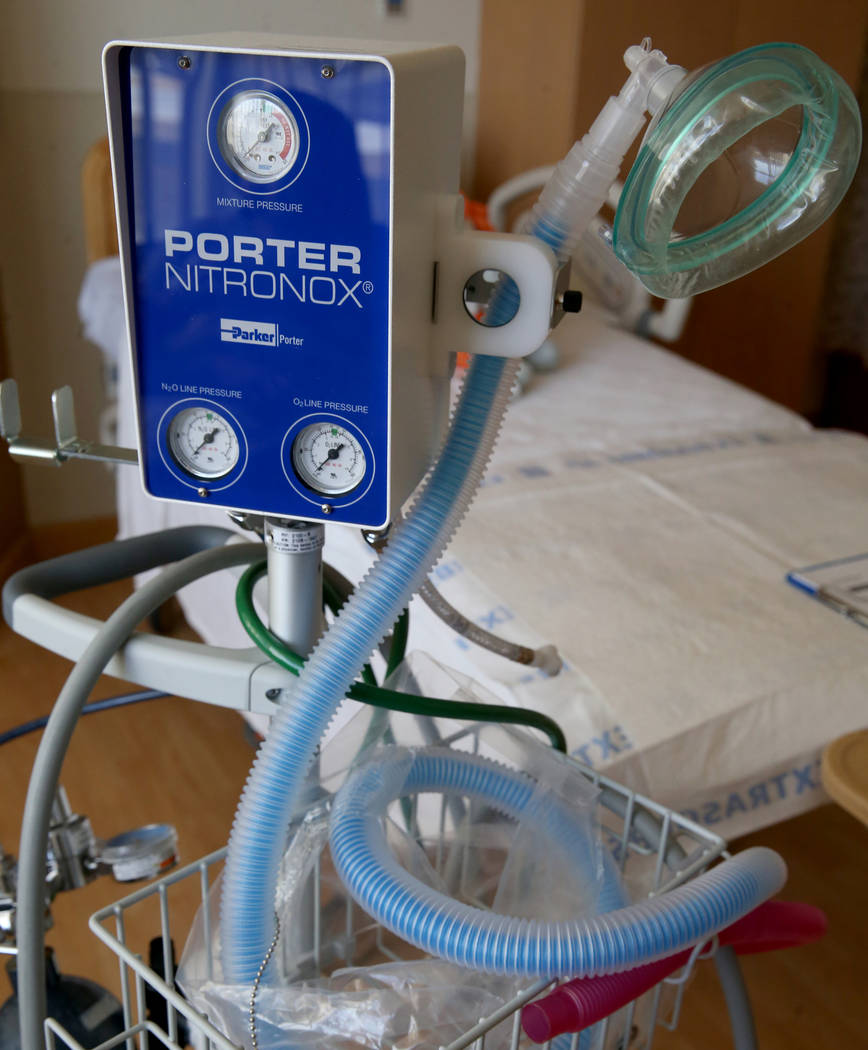 A nitrous oxide machine at St. Rose Dominican Hospital, San Martin campus in Las Vegas Thursday, Feb. 20, 2020. Patients at the hospital have the option to use nitrous oxide to manage pain when when giving birth. (K.M. Cannon/Las Vegas Review-Journal) @KMCannonPhoto

Jan. 14 was a day of firsts for Tiffany Phuong.

It was the day she became a first-time mother, with the birth of her daughter, Stella.

It was also the day that she became the first patient to use nitrous oxide — also known as “laughing gas” — during labor at St. Rose Dominican Hospital, San Martin campus.

In January, the hospital on Warm Springs Road became the first in Nevada to offer nitrous oxide to women in labor to help manage pain and anxiety, a hospital spokesman said. St. Rose Dominican Hospital, Siena campus, will start offering nitrous oxide in childbirth on March 2.

The use of the gas was once common in the U.S., but was largely discontinued after the rise of epidural injections.

Because it was her first pregnancy, Phuong didn’t know quite what to expect during labor, which made her anxious. The nitrous oxide “helped to relieve some of that anxiety and take the stress away so I could just focus on having the baby,” she said.

Phuong, a nurse at the St. Rose, Siena campus, began to experience contractions at about 2 a.m. early Jan. 14 while she was working an overnight shift. She chose to complete the remainder of her shift that ended at 7:30 a.m. She then went home to take a shower before going to the San Martin campus to meet her husband, who works there as a physical therapist.

She thought she had plenty of time, but she was wrong.

She arrived at the hospital with her cervix fully dilated, which meant that there was no time for her to get an epidural, a procedure she’d discussed with her doctor in which a local anesthetic is injected in the lower back to block pain from labor contractions.

Instead, the hospital staff offered her nitrous oxide, a widely used option in places such as the U.K., Scandinavia and Canada, but one that only in the last few years has begun to gain renewed acceptance in the U.S.

Used in the U.S. until the 1970s, nitrous oxide was replaced in popularity by the epidural, the gold standard in pain management during labor, but one that requires a woman to remain in bed and can cause her to lose sensation below the waist.

Dr. Chike Nzerue, chief medical officer at the San Martin campus, said that the nitrous oxide doesn’t necessarily replace an epidural but can be used in conjunction with it and with other pain medications.

However, so far at San Martin, most women who have opted for nitrous oxide have done so without using other pain medications because of their desire to have a more natural birth. He believes that it’s this desire that has led to the analgesic’s resurgence as a “21st century phenomenon.”

“You might argue that it’s old school and it’s being rediscovered,” he said. “The key is to know that it’s safe, effective and empowers the woman.”

A woman controls the flow of the nitrous oxide, used in a 50/50 mix with oxygen — a lower dose, Nzerue said, than used by dentists — by putting a face mask over her nose and mouth.

“The nice thing about it is you control it yourself,” Phuong said. “I’m the only one who can put the mask on and take it off. You control how much of the medication you want yourself.”

In part because of the control it offers women, midwives were early advocates for its use in childbirth. “Research has supported the reasonable efficacy, safety, and unique and beneficial qualities of N2O as an analgesic for labor and its use as a widely accepted component of quality maternity care,” said a position statement from the American College of Nurse-Midwives in 2011.

The American College of Obstetricians and Gynecologists has not taken a position on the use of nitrous oxide during labor. However, “It appears to be safe from all the data we have from the U.K.,” said Dr. Nora Doyle, an OB-GYN and a professor of maternal fetal medicine at the UNLV School of Medicine.

“Is there any effect on the baby? It doesn’t seem to be the case,” she said.

Dulce Santacroce, a doctor of nursing and an associate professor at Touro University Nevada in Henderson, agreed, saying, “The evidence is there is no harm.” But she said she’d like to see further research on its long-term effects on infants.

She also noted that nitrous oxide isn’t appropriate for all women, such as those with chronic obstructive pulmonary disease or a vitamin B-12 deficiency.

Phuong, 31, said that part of the appeal to her of nitrous oxide was that it has fewer side effects than narcotics.

“I did not want to take an opioid,” she said, noting that the only real side effect she experienced was some light-headedness. Some women also experience nausea or disassociation, a feeling of disconnectedness from what they’re experiencing.

Before using the nitrous oxide during labor, “I was not having a very pleasant experience,” Phuong said. “I was having a lot of pain with my contractions. Once they had the nitrous oxide set up, I was able to relax a little more.”

She said the nitrous oxide cut her pain by as much as half while easing her anxiety.

Did the laughing gas live up to its name?

Phuong said that at one point after several long draws “I started to do a little giggle” before pulling the mask away from her face.

Not only is nitrous oxide fast-acting, its effects dissipate quickly, Nzerue said.

Ninety minutes after Phuong arrived at the hospital, Stella was born at 11:19 a.m.

“After you’re done delivering, you’re pretty much back to yourself,” the new mother said.