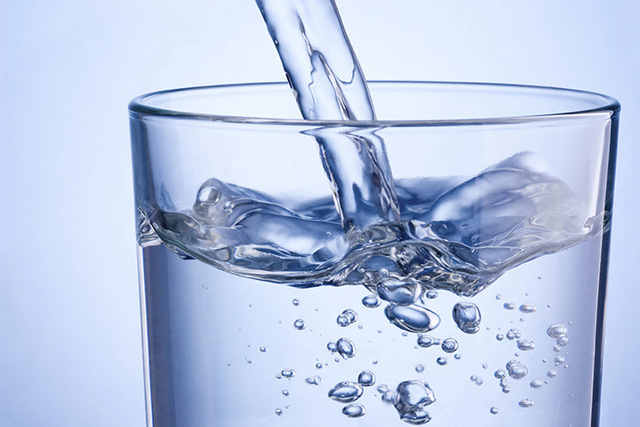 Water that flows from taps across the valley exceeds all federal and state health standards, according to the Las Vegas Valley Water District’s annual Water Quality Report released last week.

But if our water is so safe, why does the district encourage pregnant women and people with weakened immune systems to consult a doctor about drinking it?

Think of it as a second opinion, said Bronson Mack, spokesman for the water district and its wholesale provider, the Southern Nevada Water Authority.

“Understand that our water meets or surpasses the standards set by the Safe Drinking Water Act,” he said. “But don’t take our word for it.”

The advice appears in several places in the 11-page report, including a page where it is displayed alongside a photo of an expectant mother sipping a glass of water.

“If you are pregnant or have a condition affecting your immune system, ask your physician whether a supplemental treatment system is appropriate,” the report said.

Mack said the water district began adding language like that to its annual reports about 12 years ago in response to “scare tactics” used to sell filtration systems to expectant mothers.

“That’s really just giving a public agency some cover … and making sure people are making the best decisions they possibly can with their doctor,” Mack said.

Dr. Staci McHale is an OB-GYN with a private practice in Las Vegas. She said she doesn’t get a lot of questions about the safety of the valley’s tap water, maybe because her patients are already drinking the pricier stuff.

“Most of my patients show up with super-fancy bottles of water,” the doctor said.

McHale doesn’t typically recommend one source of water over another because the risk of bacterial contamination from bottled water, a filter-system or a plain old tap is so low it’s not really worth worrying about. It’s more important for her patients to stay hydrated, she said, as most pregnant women need about 100 ounces of water per day.

Fellow OB-GYN Keith Brill said he has never had an expectant mother ask him about the water quality in Las Vegas, and none of the doctors he works has gotten the question either.

But here’s Brill’s answer anyway: “I don’t think there’s any medical reason not to drink tap water. We just want them to drink water, period.”

Under the Safe Drinking Water Act, utilities nationwide are required to report their water quality test results once a year. The cities of Henderson and North Las Vegas recently released their annual reports, but neither offers any special advice to pregnant women, though all valley utilities get their water from the same source.

The district’s latest report is based on more than 327,000 tests and some 36,000 water samples from hundreds of locations from Lake Mead to Summerlin in 2014.

Mack said the district screens for 91 regulated contaminants and 50 unregulated contaminants. A few of those substances now are found in the water supply where they didn’t before only because technological improvements enable their detection at once-undetectable concentrations of as little as 1 part-per-trillion, roughly the equivalent of a single drop in 20 Olympic-size swimming pools.

The regulated contaminants most commonly found in local tap water are byproducts of the treatment process, which helps explain its occasionally off-putting flavor.

Las Vegas water also is flavored by where it comes from. About 90 percent of the valley’s supply is pumped from Lake Mead, where it arrives by way of the silt-laden Colorado River. As a result, Las Vegas has some of the “hardest” water in the country as measured by its mineral content.

There isn’t much the water district can do about that, but the utility’s annual report does offer this advice: Maybe try it with a slice of lemon.