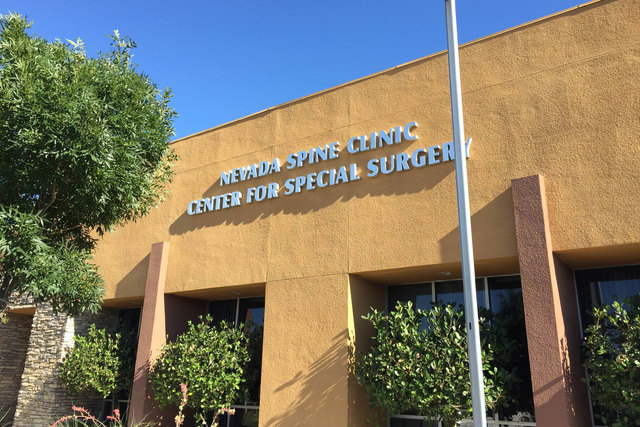 Orthopedic surgeon Jaswinder Grover of the Nevada Spine Clinic said he is "very disturbed" by the allegations against him in a California lawsuit. Grover said he has never implanted counterfeit spinal hardware in patients or accepted kickbacks. The clinic is shown on Tuesday, June 16, 2015. (Carri Geer/Las Vegas Review-Journal) 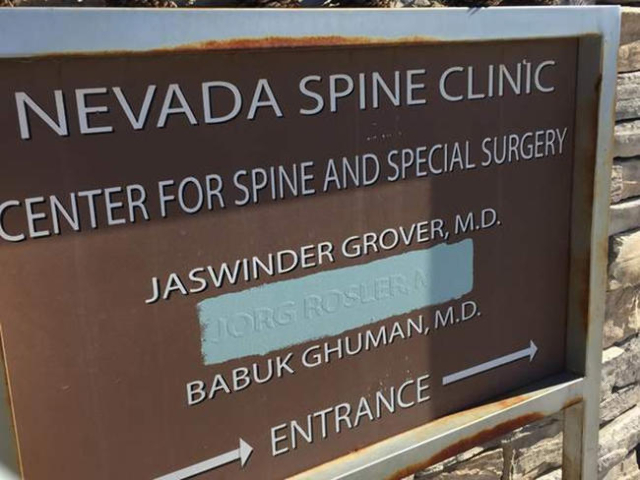 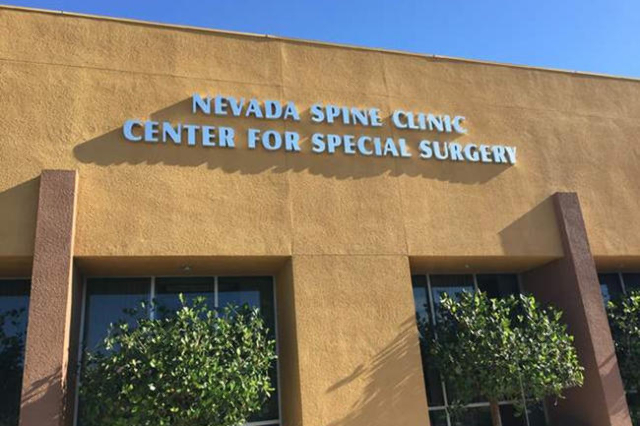 The case, filed in February by dozens of insurance companies in Los Angeles County Superior Court, was recently unsealed.

They also paid kickbacks to surgeons to use the product as part of the scheme to present false billing statements and invoices to insurance companies for reimbursement, according to the lawsuit.

It claims they — along with surgeons in Texas, Wisconsin and Maryland — entered into a sham design and development agreement with Spinal Solutions that called for the company or its president, Roger Williams, to pay them unlawful kickbacks for implanting the counterfeit hardware into unwitting patients.

McNulty, through his attorney, and Grover both deny the allegations.

“I’ve never taken any kickbacks, and I’ve never implanted any counterfeit or fake hardware,” he said.

Grover has been licensed to practice medicine in Nevada for 20 years and said he has practiced only in Las Vegas during that time.

“It’s my 20th year in practice,” the surgeon said. “We care about our patients tremendously. We endeavor to be the best that we can be.”

According to the Nevada State Board of Medical Examiners website, Grover’s insurance company reported a $500,000 malpractice settlement to the board in 2008.

The website lists the date of the alleged act or omission as December 2003.

The complaint in the case alleged that Grover failed to diagnose two fractures and “performed an unnecessary surgical procedure, during which time the pedicle screws were misplaced, causing continued pain,” according to the website.

While the California lawsuit claims both Grover and McNulty implanted counterfeit hardware into patients at Nevada Orthopedic &Spine Center, Grover said he has never been affiliated with that center or McNulty.

The lawsuit further alleges that the fake spinal hardware was delivered to both Grover and McNulty in Nevada by Williams’ private aircraft, “and flight logs confirm that these deliveries originated in California.”

“The allegations in this complaint are completely untrue as it relates to me,” Grover said.

The fake hardware has been the subject of several lawsuits in California. The Center for Investigative Reporting reported last year that Spinal Solutions had closed.

According to the center’s report, the FDA cited Spinal Solutions in 2012 for a variety of quality control violations, and the agency announced in 2013 that the company was recalling spinal implants because problems with the products “could cause patient harm due to implant breakage, movement, or inadequate sterilization.”

Las Vegas attorney John Cotton, who represents McNulty, said his client has “never used anything other than FDA-approved implements in his back surgeries.”

Cotton said McNulty once performed work, “more in the nature of a consultant,” for Spinal Solutions that involved participating in a group session with other doctors.

“All I know is they paid him an hourly rate commensurate with the charges for a nationally known surgeon,” the lawyer said.

“There’s no kickbacks to him — no evidence of that at all,” Cotton said.

McNulty has been licensed to practice medicine in Nevada since 1997. He joined Nevada Orthopedic &Spine Center that year, according to the center’s website.

The State Board of Medical Examiners website lists no discipline for either McNulty or Grover.

The lawsuit claims the hospitals turned a “blind eye” to the surgeon, the vendor and the product “so that false, fraudulent and misleading bills and invoices could be presented to insurance carriers and other payers.”

Gretchen Papez, spokeswoman for Centennial Hills, said the hospital does not comment on pending litigation. Representatives of the other Las Vegas hospitals did not respond to requests for comment.

Danita Cohen, UMC’s executive director of strategic development and marketing, said that “UMC is just one of several hospitals named both locally and nationally in this lawsuit and due to pending litigation, we are unable to comment at this time.”

The lawsuit claims Centennial Hills, Sunrise and UMC permitted counterfeit hardware that was manufactured by Spinal Solutions into their facilities, where it was implanted into patients during spinal fusion surgeries by Grover and McNulty.

It also claims Centennial Hills and Sunrise had Grover and McNulty flown to California on private aircraft hired by Williams and/or Spinal Solutions to attend business meetings regarding the kickback agreements and other matters.

Defendants in the case, including the hospitals and surgeons, “fraudulently and dishonestly betrayed the position of trust conferred on them by our society, by preying on a vulnerable patient population for financial gain,” the document alleges.

“The scope of this health care fraud scheme is massive and unprecedented in California,” according to the complaint.