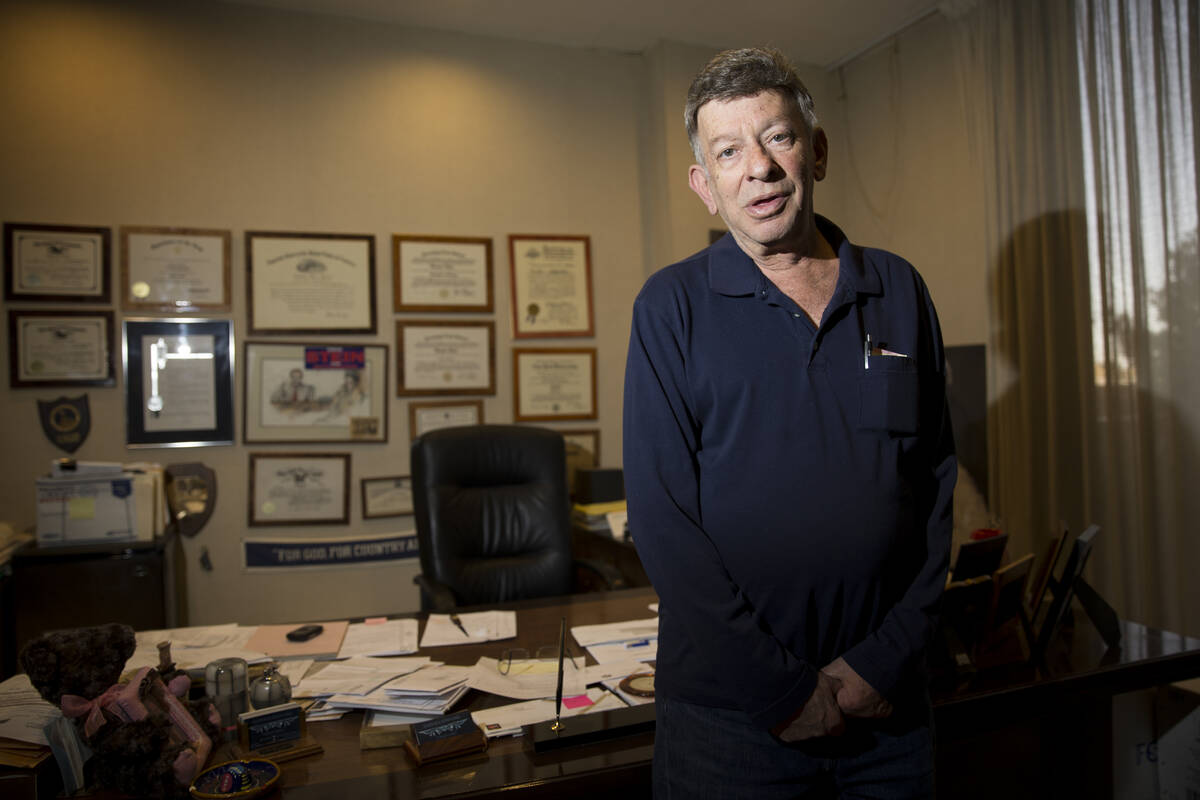 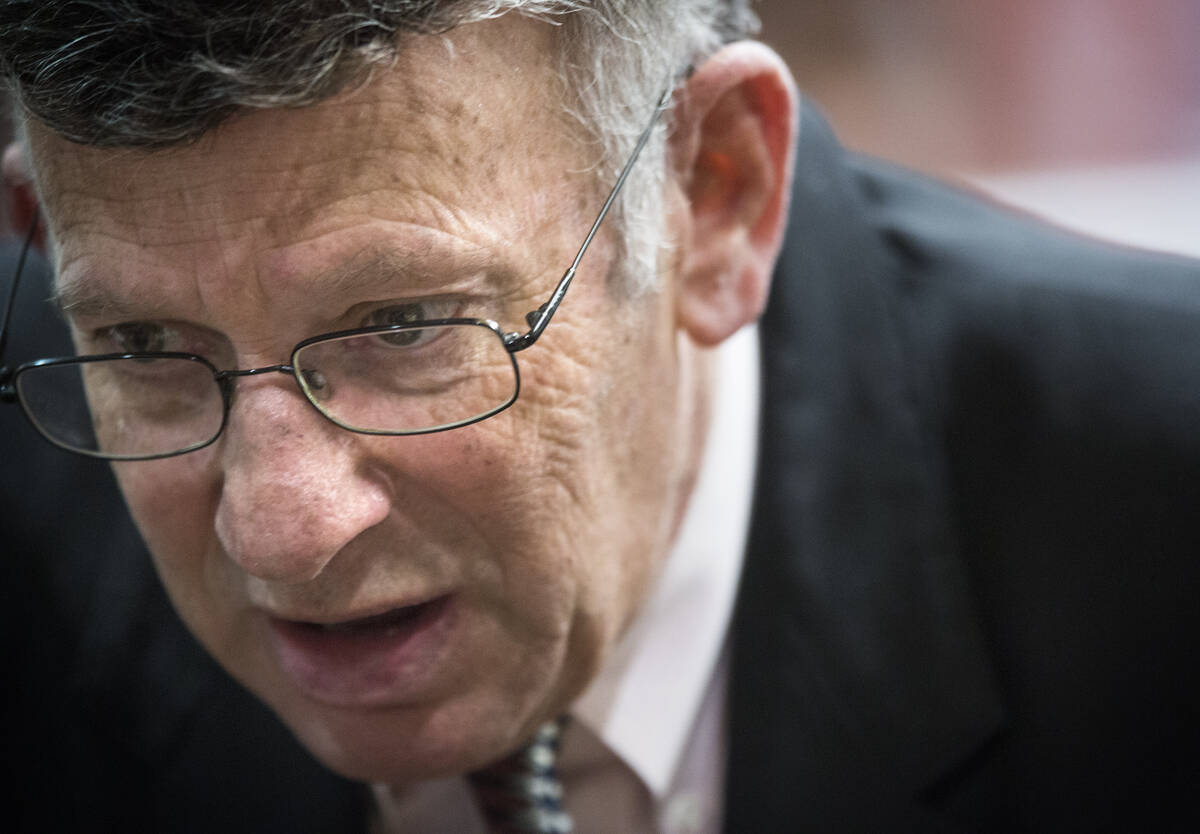 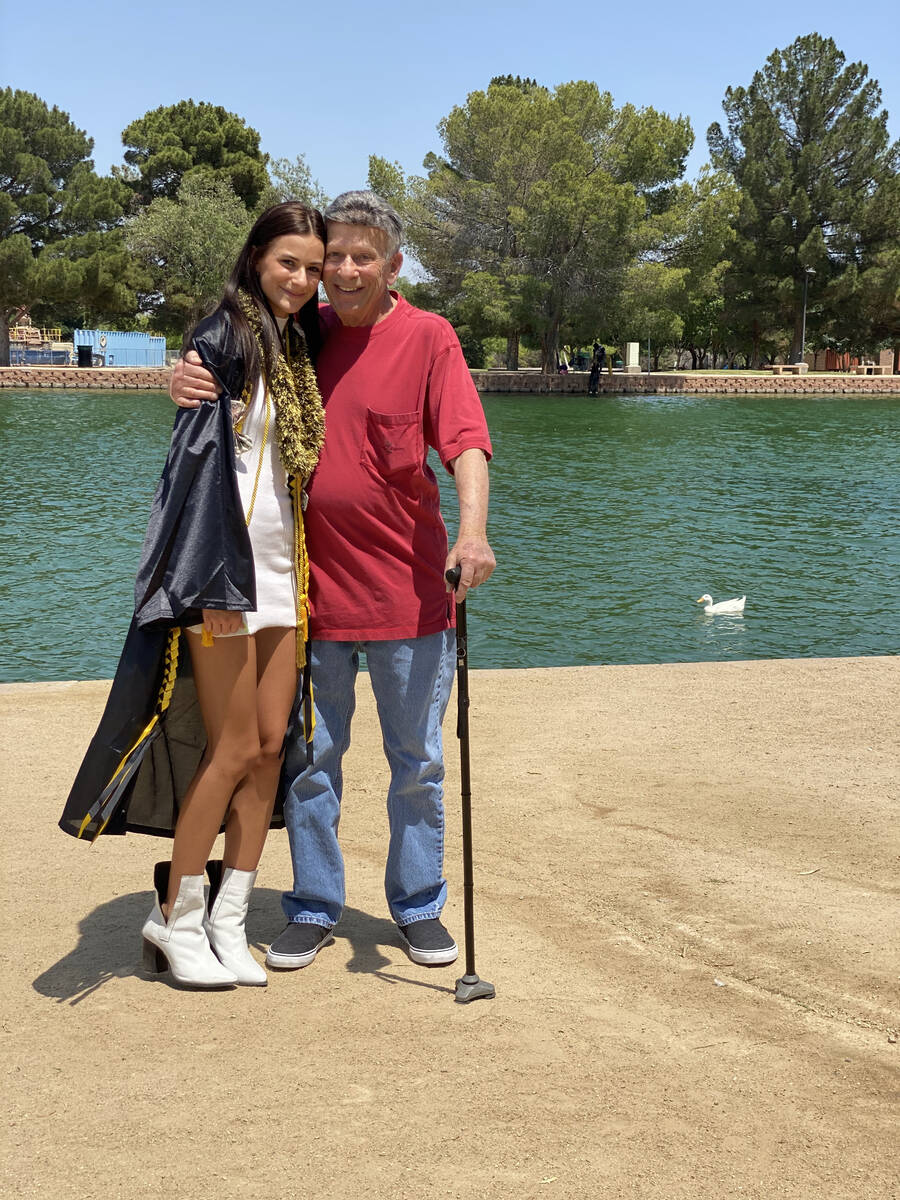 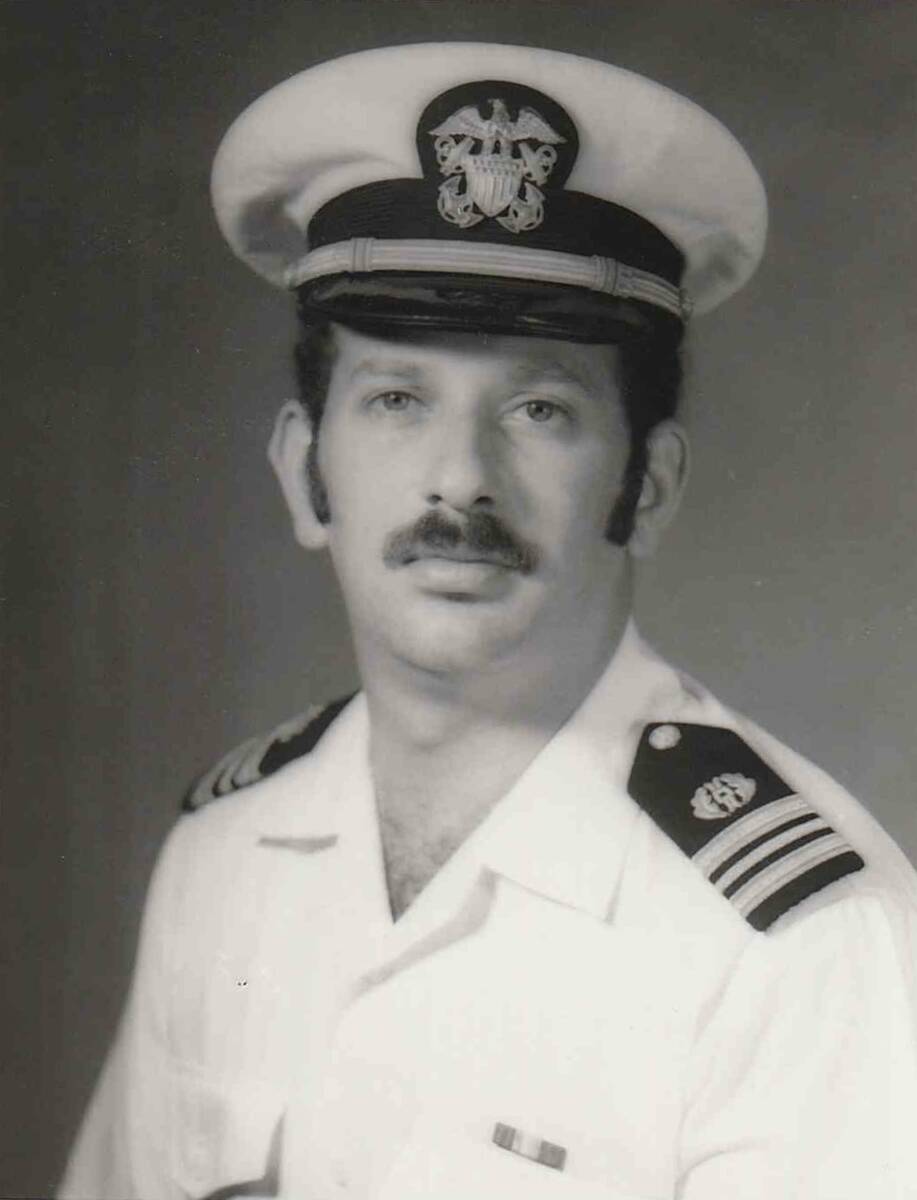 Stephen Stein enlisted in the Navy when he was 18 and served in Vietnam. (Courtesy of Katie Stein) 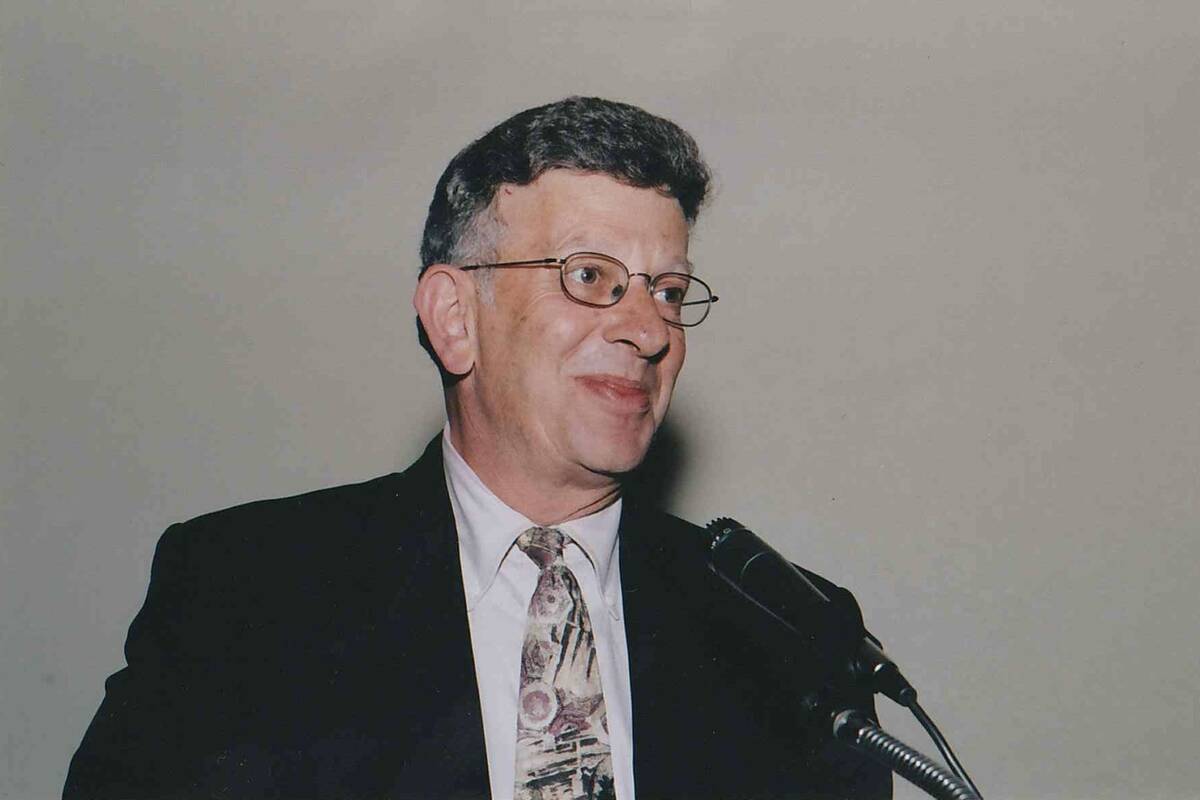 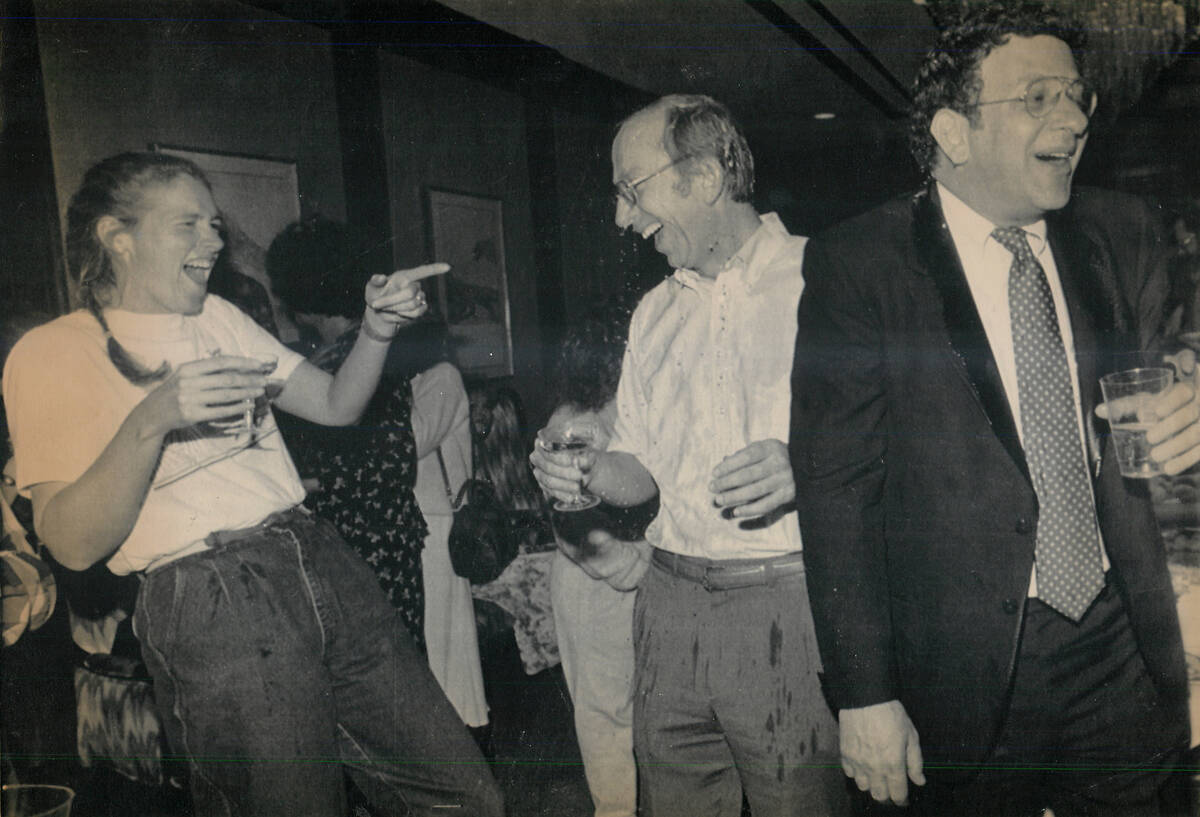 Howard Lee Haupt, center, is drenched with Champagne at a party marking his acquittal on Feb. 15, 1989, in the death of Alexander Harris. Haupt's fiancee, Tina Van Den Hazel, left, and defense attorney Stephen Stein join in the celebration. (The Associated Press)

Longtime defense attorney Stephen Stein, whose career spanned work on the east coast and several decades in Las Vegas, has died. He was 78.

For the last two years, Katie Stein and her boyfriend, Anthony Dowding, had cared for Stein.

“He was definitely the best dad ever,” Katie Stein said. “He was always there.”

She said her father had several previous illnesses including cancer, chronic obstructive pulmonary disease, and diabetes.

On one visit, she said they were in the front row of the whale show and when music played Stein started singing, despite being what she jokingly described as “a horrible singer.”

“He didn’t care, he was going to be himself,” she said.

Katie Stein said she would drive her dad to doctor’s appointments and court even as he was recovering from illness.

“He never stopped… He was working to the end,” Katie Stein said.

Stephen Stein was born in Brooklyn. He graduated high school at 15 and enlisted in the Navy at 18, according to his daughter.

He served in Vietnam and later worked in New York and Philadelphia before coming to Las Vegas to work with famed mobster attorney and former Las Vegas Mayor Oscar Goodman.

Goodman said that hearing about Stein’s death had saddened him.

“Very upset about it,” he said. “But I guess he had a good run there.”

Goodman said he met Stein more than 50 years ago when he was defending suspects in federal court. At the time, Goodman said, Stein was working as an assistant U.S. attorney.

“Even though we were on opposite sides, I developed respect for him and it grew into a relationship,” said Goodman, noting that he later offered him a job in his law firm, and they later became partners, which lasted for many years.

Goodman said he and Stein had an “excellent relationship as time went on,” noting that Stein was always cordial.

After Goodman was elected mayor, Stein continued practicing, but the two would still cross paths.

One high profile trial victory for Stein was the acquittal of Howard Lee Haupt in 1989 after being accused of killing 7-year-old Alexander Harris, according to Review-Journal archives.

Former attorney Luis Rojas was partners with Stein at the Law Office of Stein and Rojas from 1999 until 2015.

Rojas and Stein teamed up for criminal defense work, representing many of the “so called Mafioso criminals,” Rojas said.

He said it was Stein’s ability to make people laugh that helped Stein be a better advocate for his clients.

“He brought levity and humor into circumstances and situations where tension, seriousness was surrounding the situation,” Rojas said. “Through his being able to create levity it brought people back to earth.”

Rojas said when heard Stein had died he, “immediately sobbed and had to sit down.”

“Steve was a great attorney. He was a wonderful advocate and he was a beautiful person,” Rojas said. “Those are very difficult to find all together.”

Clark County District Attorney Steve Wolfson remembered being a young prosecutor in North Las Vegas Justice Court in the 1980s and being worried when Stein walked into the courtroom.

Wolfson described Stein as a family man and genuine.

“He was always an attorney whose word you could take to the bank. You could trust what Steve Stein said and that says a lot about attorneys,” Wolfson said. “Some attorneys don’t have that same kind of relationship and integrity but Steve certainly did.”

Wolfson and Stein remained friends for more than four decades.

“We’d go out to lunch and we’d talk about just life in general,” Wolfson said. “So he was a real genuine human being and I got to know Steve on a personal level and he’s a great friend. And I’m very very sorry that we lost him.”

A Go Fund Me page was created to raise money for the family’s in dealing with expenses related to Stein’s death.

Much has been written about that tragic night. Almost every story starts the same. My story is no different.