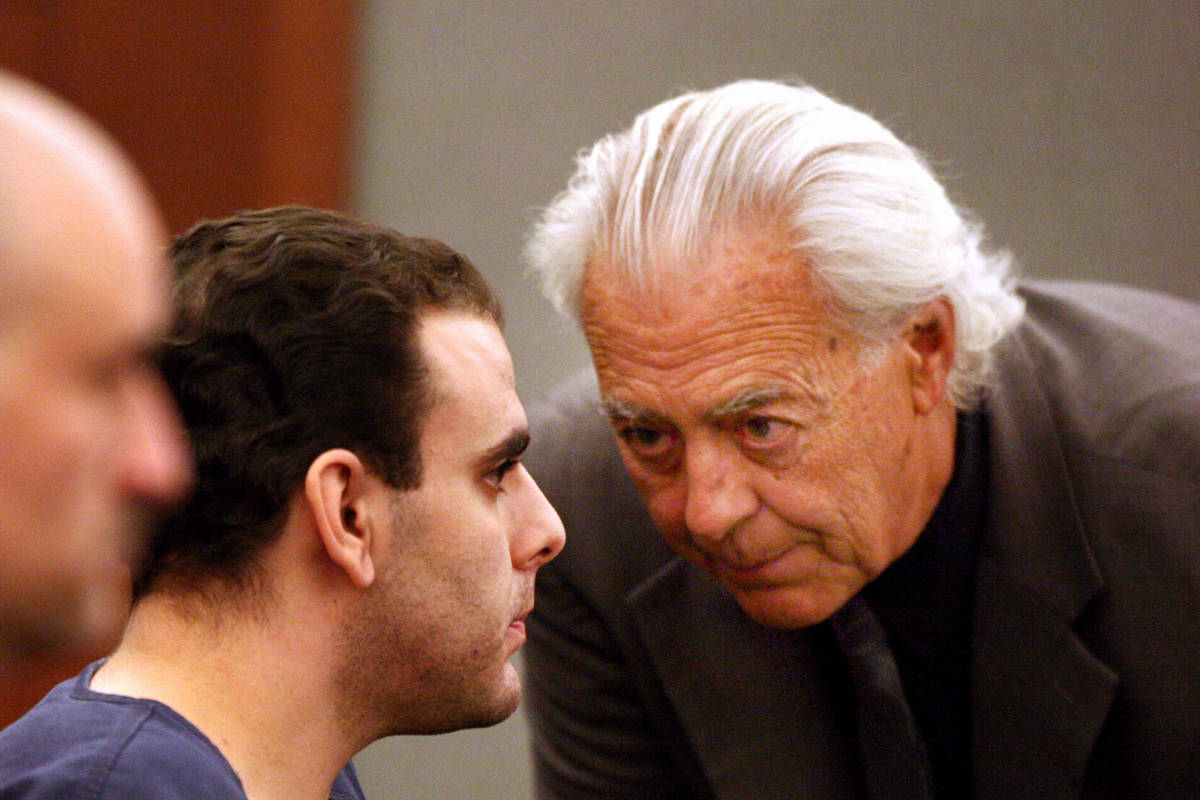 Attorney Bill Terry, right, talks with his client Anthony Carleo in Clark County District Court in Las Vegas on Aug. 25, 2011, during Carleo's sentencing hearing in connection with the armed robbery of the Bellagio. (Las Vegas Review-Journal) 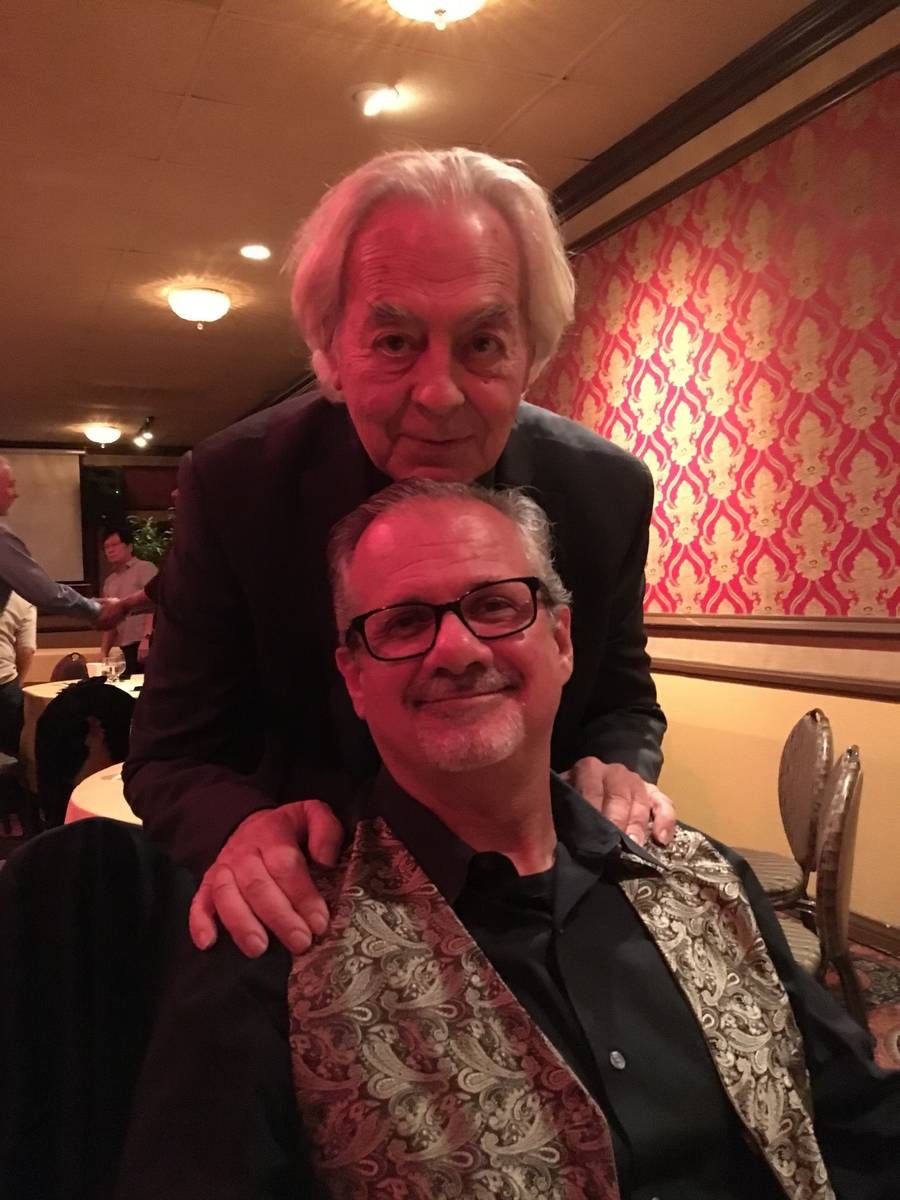 In this undated photo, Bill Terry, standing, is seen with Ozzie Fumo at the Italian American Club. (Ozzie Fumo) 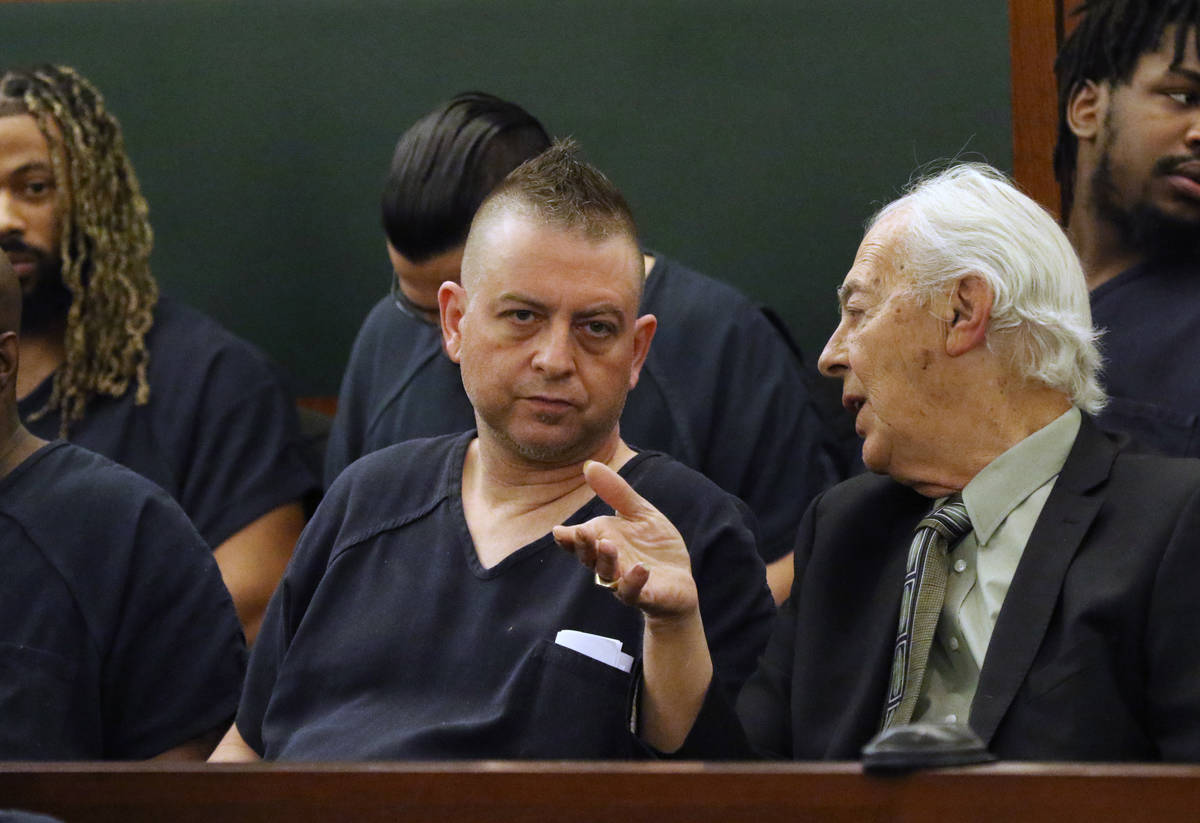 Bill Terry, right, talks to Christopher Prestipino in court on March 12, 2020. Prestipino was accused of killing 24-year-old Esmeralda Gonzalez and burying her body in a cement structure hidden in the desert. (Bizuayehu Tesfaye/Las Vegas Review-Journal) @bizutesfaye 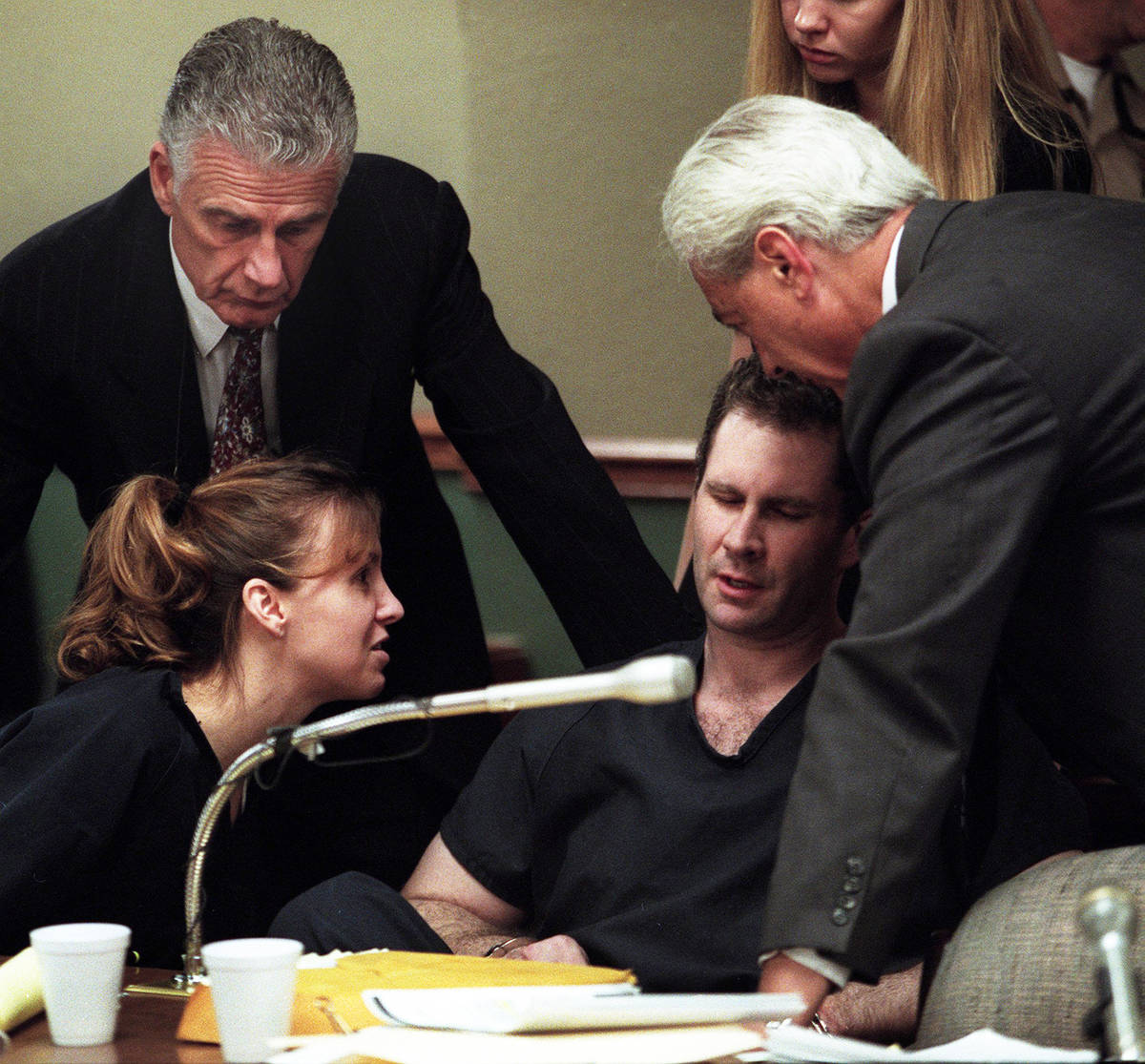 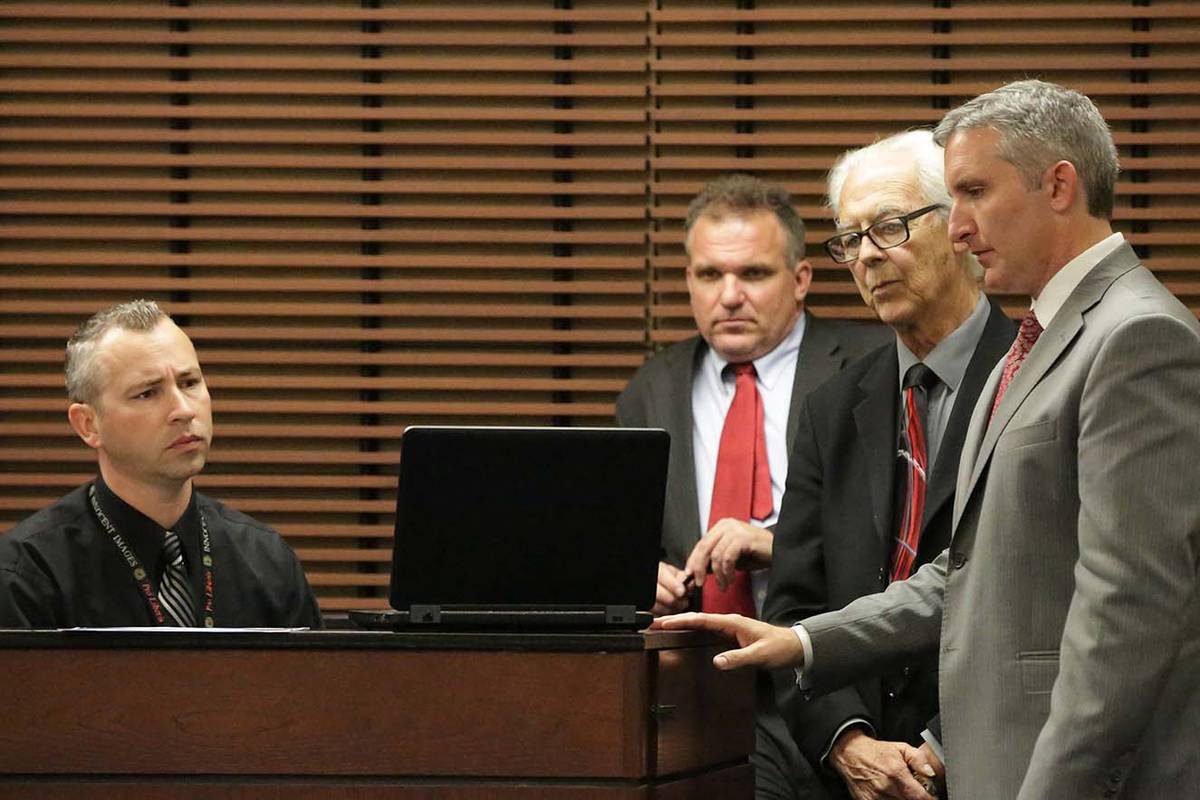 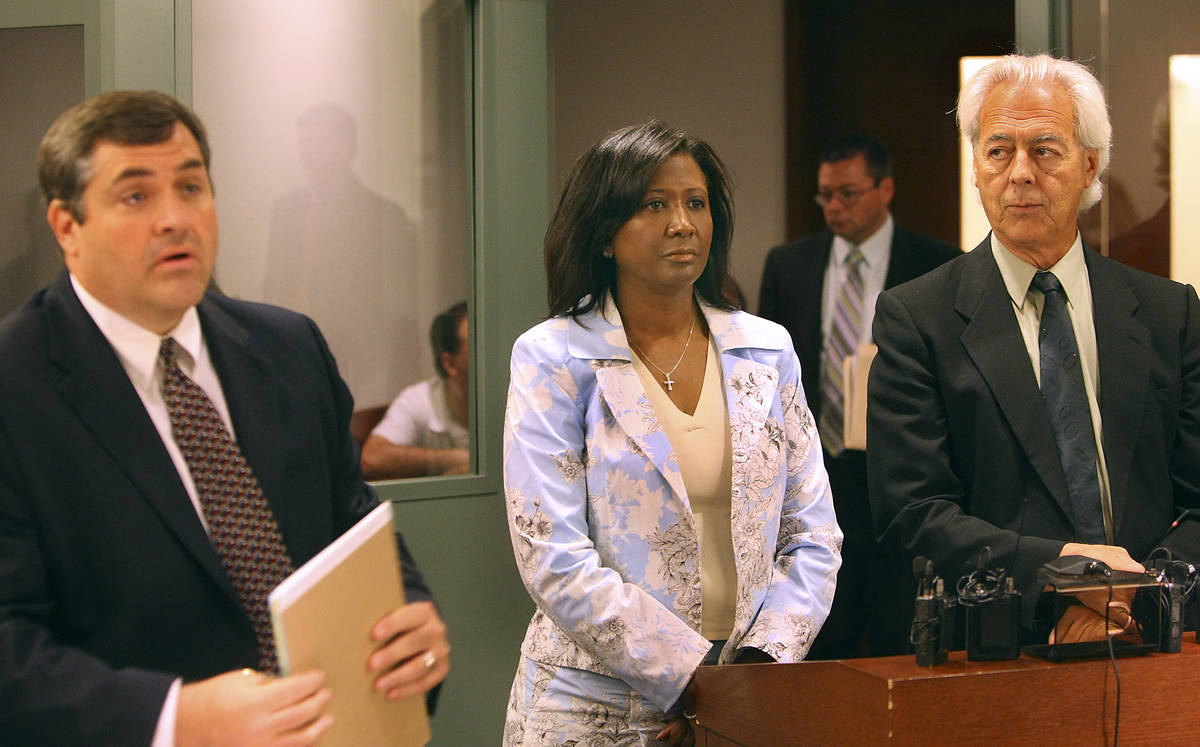 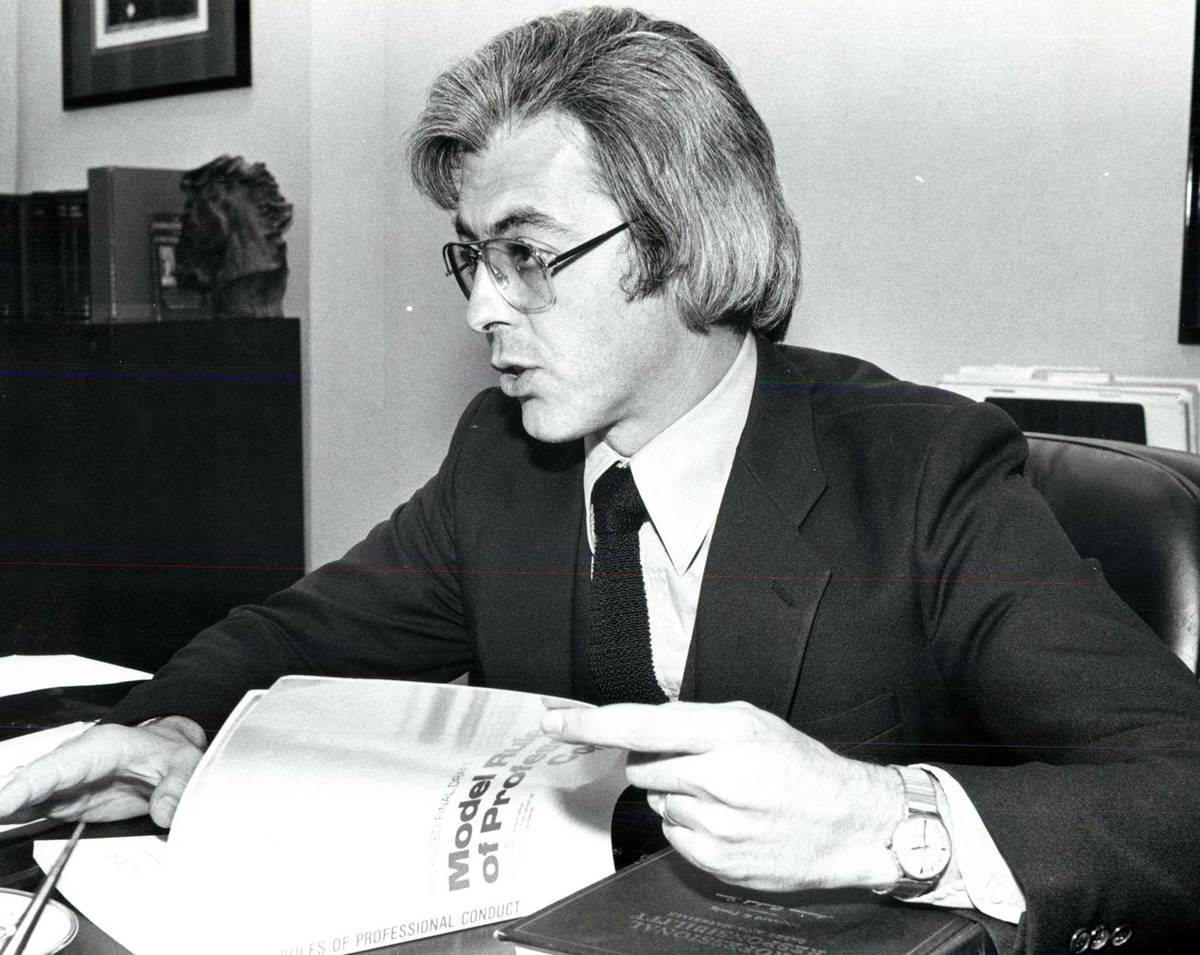 Las Vegas defense attorney William “Bill” Terry, who handled some of the city’s most renowned cases during a career that lasted nearly five decades, died at his home Friday after a battle with cancer. He was 74.

Terry, who was admitted to practice law in Nevada in 1973 after earning a doctorate in law from the University of San Diego, represented accused murderers and mobsters, crooked politicians, embattled judges and troubled lawyers. He was widely revered for his kindness among the valley’s legal community and his ferocity in the courtroom.

Friend and fellow criminal defense attorney Tom Pitaro remembered Terry as a man dedicated to his craft, whether in the courtroom, on a vacation in another part of the world, or at their regular Saturday lunch downtown.

“Quite truthfully, Bill was one of the few people I actually admired,” Pitaro said. “Even though he was a friend, I always had him up on a little pedestal. We lost one of the giants in the legal community, not only as a practitioner, as an attorney, but as a gentleman.”

Though Terry, who began his career as a federal prosecutor, had many major legal victories and worked until his final days, he was not boastful or flashy, according to those who knew him.

“He was an honor to his profession and an ornament to human nature,” said lawyer and Nevada Assemblyman Ozzie Fumo.

After the suspicious death of gaming figure Ted Binion, which led to what is perhaps the most well-known criminal proceeding in Las Vegas history, Terry represented two of the defendants as the case worked its way through the legal system.

In a town where legal billboards line the highways and high-end attorneys capture headlines, Terry carried files in the same briefcase for decades and left business cards in his office, rather than his wallet.

“He didn’t have to hustle for business,” said Family Court Judge Linda Marquis, a former law partner who started working for Terry when she was in high school. “The business came. The clients came. He was extraordinarily successful. But that wasn’t something he chased.”

Marquis recalled how they often would celebrate legal victories with chili cheese dogs inside his Chrysler Sebring convertible in the parking lot of a 7-Eleven on Charleston Boulevard.

“His hard work went to all of the things that were important to him,” she said, “and that was his family.”

Pitaro recalled a moment in court years ago when he pulled aside one of the few prosecutors who took issue with Terry.

But most lawyers on both sides of the aisle respected Terry and his pleasant demeanor.

“He is one of the best lawyers I’ve ever known,” Wolfson said. “There was no ego involved. Bill brought absolute credibility to any topic that was being discussed. He was a man of honor. He was a man of his word. He was a man of the highest integrity. … His loss is huge to this legal community. But more so on a personal basis, he was everybody’s friend. And I’m going to miss him dearly.”

“He always got good results,” Roger said. “Being a defense attorney doesn’t mean you get your clients off every time. But I can’t think of a single case where Bill Terry didn’t get as good of a resolution as he could for a client.”

A devout Catholic and graduate of Bishop Gorman High School, Terry was a parishioner at St. Anne’s Catholic Church. He worked seven days a week but set aside Wednesday nights for dinner with his family, according to fellow lawyers.

Early in his career, he was an alternate judge in Las Vegas Municipal Court. He acted as a member and chairman of the State Bar of Nevada Disciplinary Board. He lectured on an array of legal topics. In 1997, he earned the Clark County Bar Association’s Professionalism Award.

He was also a mentor to younger lawyers like Ryan Helmick, who worked under Terry soon out of law school and routinely joined in Saturday lunches with Terry, Pitaro and Fumo.

“There’s no other man like him that I’ve ever met in my life,” Helmick said of Terry. “He’s always been my mentor, and then he became more than that. He became a father figure for me.”

For several years Oscar Goodman — who went on to become mayor of Las Vegas — worked side by side with Terry as a law partner. Goodman said Terry earned deference from prosecutors and judges.

Even after the two parted ways professionally, Goodman said, they would greet each other with high-fives.

“He was a quintessential defense attorney,” Goodman said. “He was loved by his clients. respected and admired by his colleagues and the judiciary, and his opponents knew that he would give them all he could handle.”

“He was incredibly perceptive, an absolute gentleman and a keen advocate for anybody who was in trouble,” Chesnoff said. “He had complete integrity, a very honorable person, and everybody knew that. He also never took himself too seriously. He never displayed the ego that he would have been allowed to display.”

Las Vegas Justice of the Peace Suzan Baucum, who visited with Terry on Thursday night, said he was surrounded by family when he died.

“Bill Terry was a gentleman, an amazing lawyer, and a kind and caring person,” Baucum wrote on Facebook. “I was privileged to call him my friend.”

He is survived by his three children, William “Billy,” Jenny and Frederick “Freddie,” and three grandchildren, Alexis, Ashley and Joey.