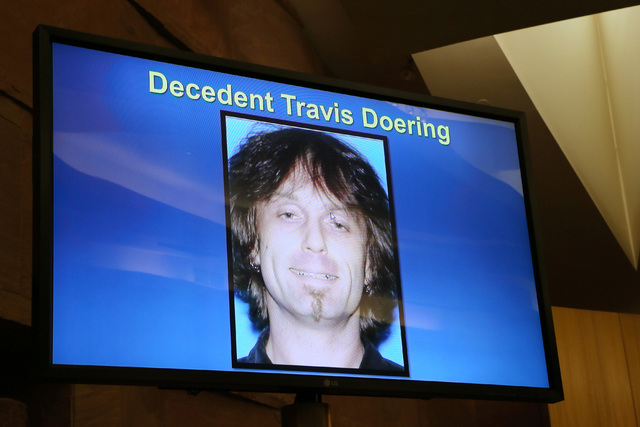 An image of Travis Doering is shown on a screen during a police fact finding review at Clark County Government Center Wednesday, June 10, 2015, in Las Vegas. The review covered details of an officer-involved shooting that resulted in the death of 40-year-old Doering, who pointed a rifle at police last April. (Ronda Churchill/Las Vegas Review-Journal) 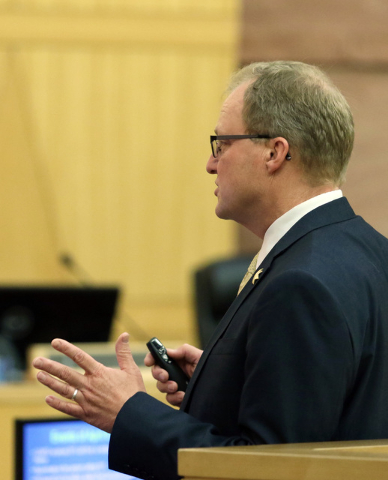 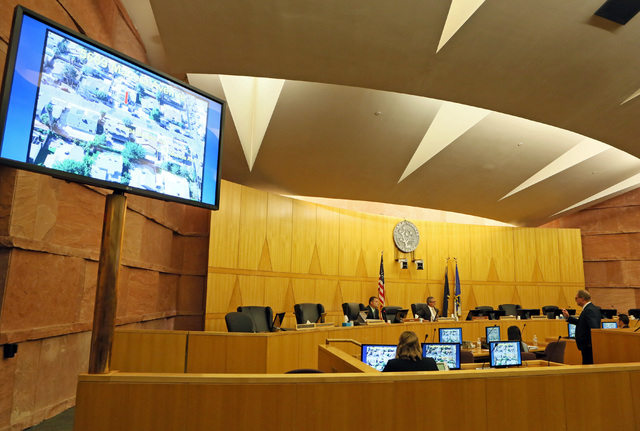 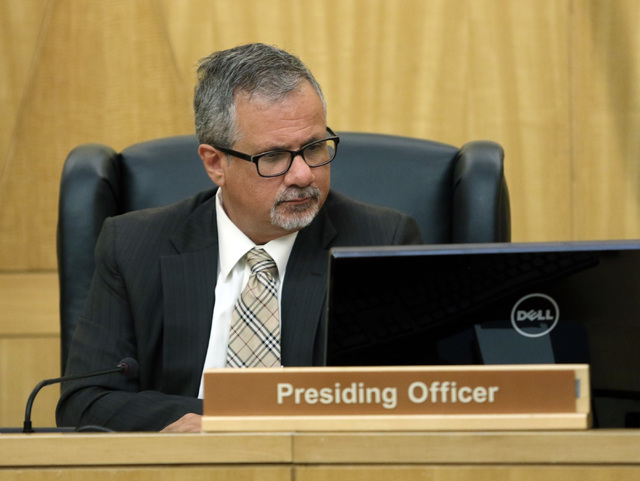 Ozzie Fumo looks over data during a police fact finding review at Clark County Government Center Wednesday, June 10, 2015, in Las Vegas. The review covered details of an officer-involved shooting that resulted in the death of 40-year-old Travis Doering, who pointed a rifle at police last April. (Ronda Churchill/Las Vegas Review-Journal) 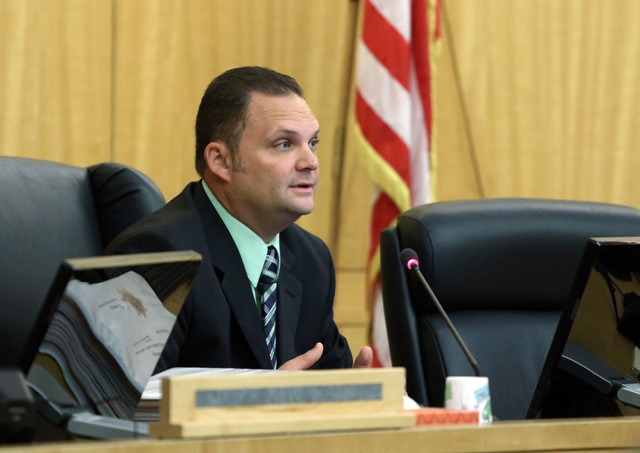 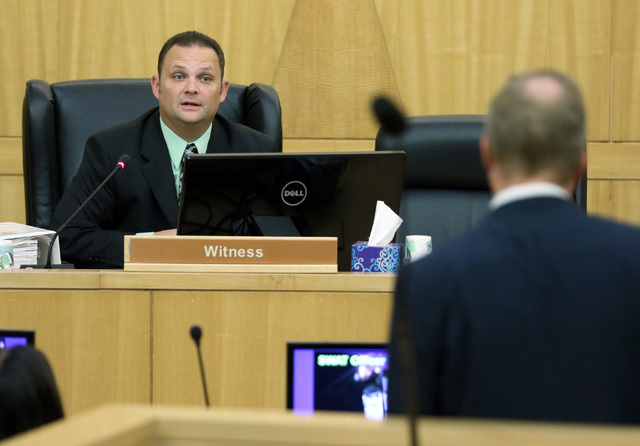 Travis Doering had been awake for five straight days and was high on methamphetamines when he was shot and killed by Las Vegas police in April 2014, police said during a public hearing Wednesday.

Doering, 40, died in the early morning hours of April 8, 2014, outside his house in the 5700 block of Maceta Avenue, near the intersection of Twain Avenue and Duneville Street. He was shot after a two-hour standoff with officers that ended when SWAT sniper John Wiggins fired a single round when Doering trained his assault rifle on two nearby officers, Metro homicide detective Ryan Jaeger said during a public fact-finding review of the fatal shooting.

Doering’s roommates told police he had been talking to himself, Jaeger said, and was storing many of his belongings in a storm drain miles away from the home.

But the Tuesday morning he died, everything started with the television.

Doering didn’t help pay the cable bill at the house, Jaeger said, so his roommates didn’t allow to use the TV.

That set Doering off.

He paced around the house with an SKS-type assault rifle in hand. Fearing Doering was either suicidal or psychotic, Jaeger said, the roommates called police.

Metro got to the house about 3:30 a.m. Officers Alex Gonzales and Joshua McEwen set up behind a minivan across the street from Doering’s home to watch his movements, Jaeger said, and a third started talking to Doering over the phone.

McEwen, who acted as the “spotter” for Gonzales, meaning he was watching Doering through binoculars, was wearing a body camera that recorded the incident. But because of the position of the camera on McEwen’s shirt collar, much of the video only captured his arm as he looked through the binoculars. The camera did capture the audio as McEwen radioed information about Doering’s movements to the other officers.

Doering repeatedly went in and out of the house and hung up on the officer four times, Jaeger said. When the officer couldn’t get him back on the phone after dozens of tries, SWAT was finally called out.

Sniper John Wiggins was the first SWAT officer to arrive and took position on a roof with a clear line of sight of the front of Doering’s house.

Doering eventually came out of the house and into the driveway holding the assault rifle, Jaeger said. On three separate occasions, he put the gun on the ground, put his hands up as if to surrender, but then quickly grabbed the gun and retreated towards the front door, Jaeger said.

“It appeared that Doering was maybe trying to pull the officers out of their positions to see where they were,” Jaeger said.

After he picked the gun up the final time, Doering took a crouched shooting stance behind the Chevy Impala parked in the driveway and began slowly scanning the street for officers, Jaeger said.

And then, Jaeger said, he stopped.

His gun was fixated directly on the two officers behind the minivan. Officers heard him chamber a round, as the gun remained fixed on their position. Gonzalez, fearing that Doering was going to fire at him and McEwen, was about to fire when he heard the crack of Wiggins’ sniper rifle and saw Doering fall to the ground.

Inside Doering’s bedroom police found a Mac-10 semi-automatic pistol with a silencer, several strips of ammo for the assault rifle, and a crossbow, Jaeger said.

A toxicology test revealed Doering had marijuana and methamphetamines in his system when he was shot, Jaeger said.

Doering worked at H.A.S. Productions and was an avid musician, according to family.

The district attorney’s office made a preliminary determination not to file criminal charges against the officers involved in the shooting and will declare whether the shooting was justified in the coming weeks.