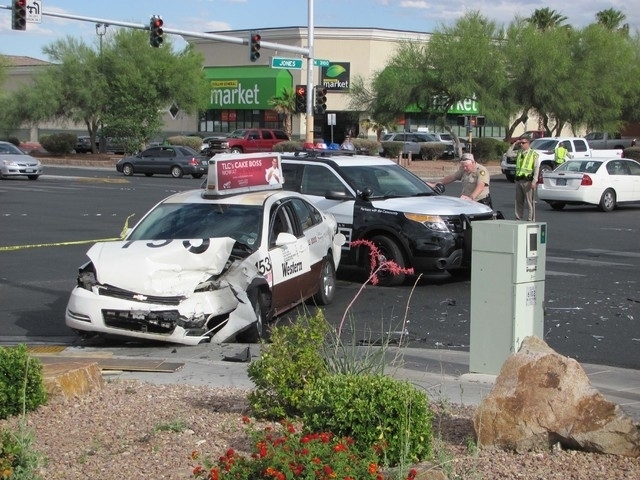 Las Vegas police work the scene after a crash shut down the intersection of Cheyenne Avenue and Jones Boulevard. A taxicab collided with a blue Mercedes sedan. (Greg Haas/Las Vegas Review-Journal) 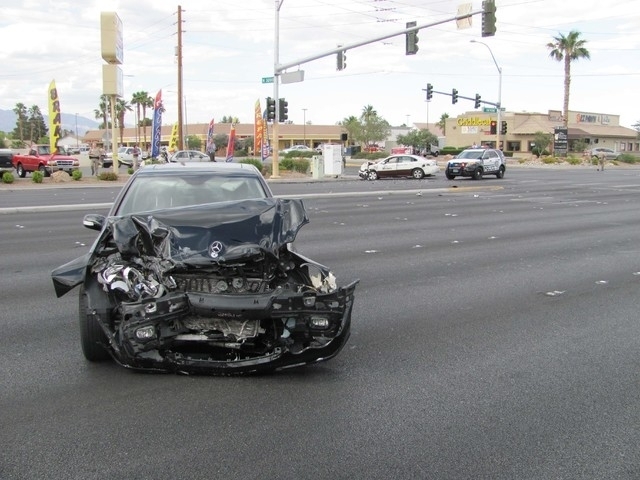 A blue Mercedes sedan rests in the eastbound lane of Cheyenne Avenue just before the intersection with Jones Boulevard. The Mercedes and a taxicab, which can be seen in the background, collided Wednesday afternoon. Police shut down Cheyenne and routed westbound traffic onto Jones as they performed and investigation. (Greg Haas/Las Vegas Review-Journal) 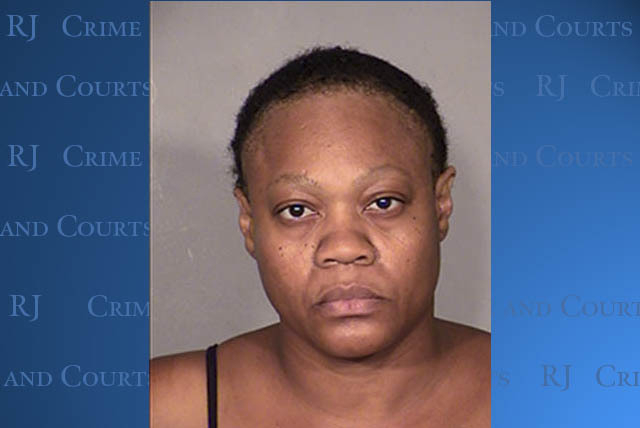 Erica Hagan, 42, faces eight charges including battery by strangulation, attempted murder, robbery and leaving the scene of an accident. She was arrested May 31. (Las Vegas Metro Police Dept.)

The woman who police say in May assaulted a cab driver while he was driving, stole his cab then crashed it into other vehicles has been arrested.

Erica Hagan, 42, faces eight felony charges including battery by strangulation, attempted murder, robbery and leaving the scene of an accident. She was arrested May 31.

Hagan got into Yohannes Tsegaye’s cab on May 21 at the Plaza Hotel. Tsegaye drove her toward Rancho Drive and Decatur Boulevard, where police say Hagan became violent.

“You’re going to die today,” Hagan said as she choked Tsegaye, hit him in the head with a rock and stole his money, according to a police report. Tsegaye told officers the woman tried to rip the cab meter and camera off of the dashboard and turned off the radio so he couldn’t call his dispatcher for help.

Tsegaye eventually escaped the cab but Hagan got into the driver’s seat and hit him with the car multiple times, according to her arrest report. A witness told police she used the car to pin him against a chain-link fence. He was taken to the hospital with a concussion, bruises and scrapes.

As Hagan drove away in Tsegaye’s cab, she ran a red light and caused a crash at Cheyenne Boulevard and Jones Avenue. Hagan got out of the crashed cab, where a witness tried to see if she was OK. Hagan pulled the man out of his car and drove away in it, running a second red light and nearly causing another crash, police said. She was able to flee the scene.

Hagan’s ID was found near where she ran the cab into its driver. She has been arrested in the past for obstructing a police officer, DUI, car theft and other traffic-related charges, police said.

Several witnesses identified Hagan as the suspect of the crimes and police arrested her in the Summerlin area.

Hagan is being held without bail and is scheduled to appear in court June 17.