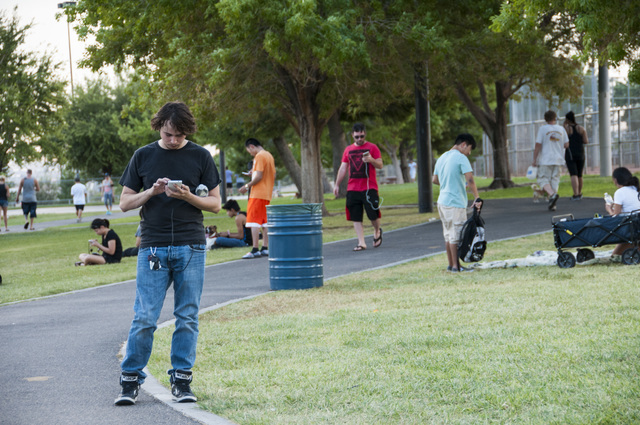 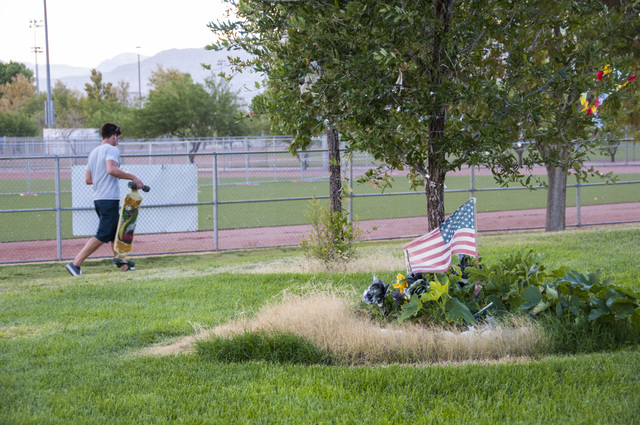 A man carries his long board at Desert Breeze park among "Pokemon Go" players in Las Vegas on Thursday, July 28, 2016.(Christian Bertolacini/Review-Journal) 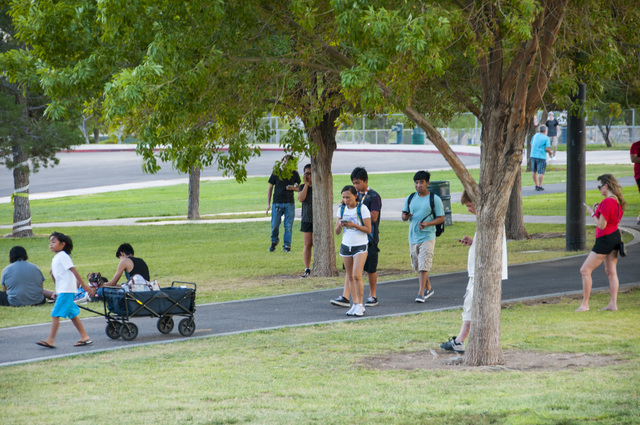 In the wake of violent incidents at two valley parks this week, the Metropolitan Police Department offered tips on how to play the hit mobile game “Pokemon Go” safely.

On Monday, two people were shot during a gunfight at Freedom Park, near the intersection of Pecos Road and Washington Avenue, when a man in a vehicle attempted to rob a group of six players at gunpoint— and one of them pulled out his own concealed handgun and the two exchanged fire.

On Wednesday, two people were injured at Desert Breeze Park after chasing down a man whose phone was taken by another man; the victim pulled out a knife and slashed at the other two chasing him, causing minor injuries, Metro said.

In a flier, the department shared tips on safe play, including not displaying valuable items such as jewelry and wallets; traveling in pairs while playing; and paying attention to surroundings and other persons while playing.

“We encourage people who may be out and about playing ‘Pokemon Go’ to use the buddy system, be aware of their surroundings, especially when going to areas that are unfamiliar, and respect private property,” Metro spokesman Laura Meltzer said. “Several of the events that have recently occurred in Las Vegas involved crimes of opportunity committed against players of the game.”

Samuel Nunn said he had his phone taken at gunpoint near Desert Breeze.

“I was actually mugged a few weeks ago for my phone right when ‘Pokemon Go’ came out, I was mugged right up the street,” said Nunn, who said he has played ‘Pokemon Go’ at the park since the game’s release.

But the mugging and more recent events have not robbed him of his desire to play; less than a day after the knife-related incident at Desert Breeze, Nunn was back and playing.

“I feel safer at the park. I won’t really walk off the park unless I’m in a somewhat bigger group.”

Though he said he still feels safe at the park, he offered his own tips for players.

“Play in a well-lit area — if not well-lit, very crowded, with a lot of people around you,” Nunn said.

Nunn advised against playing the game alone and praised the spirit of the players coming together. “Especially in this area, there’s a very communal feeling.”

Nunn said the park typically contains hundreds of people playing the game, and the park doesn’t clear out until 3 a.m.

In spite of his bad experience, Nunn said he has made friends playing the game and praised it as a positive activity.

“Overall, I’m not too worried,” he said. “There are always going to be some bad people out there, but it seems that there are more people playing to connect with other people. … Most people are here to have fun and play.”