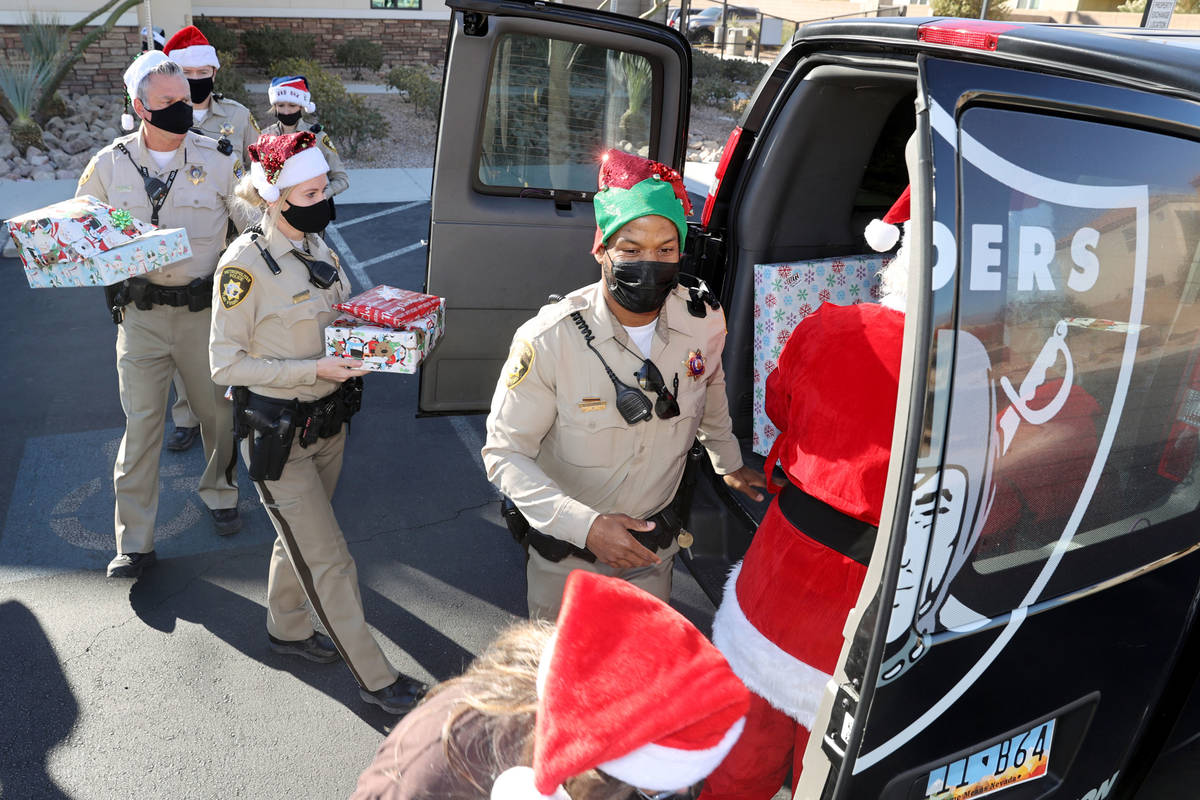 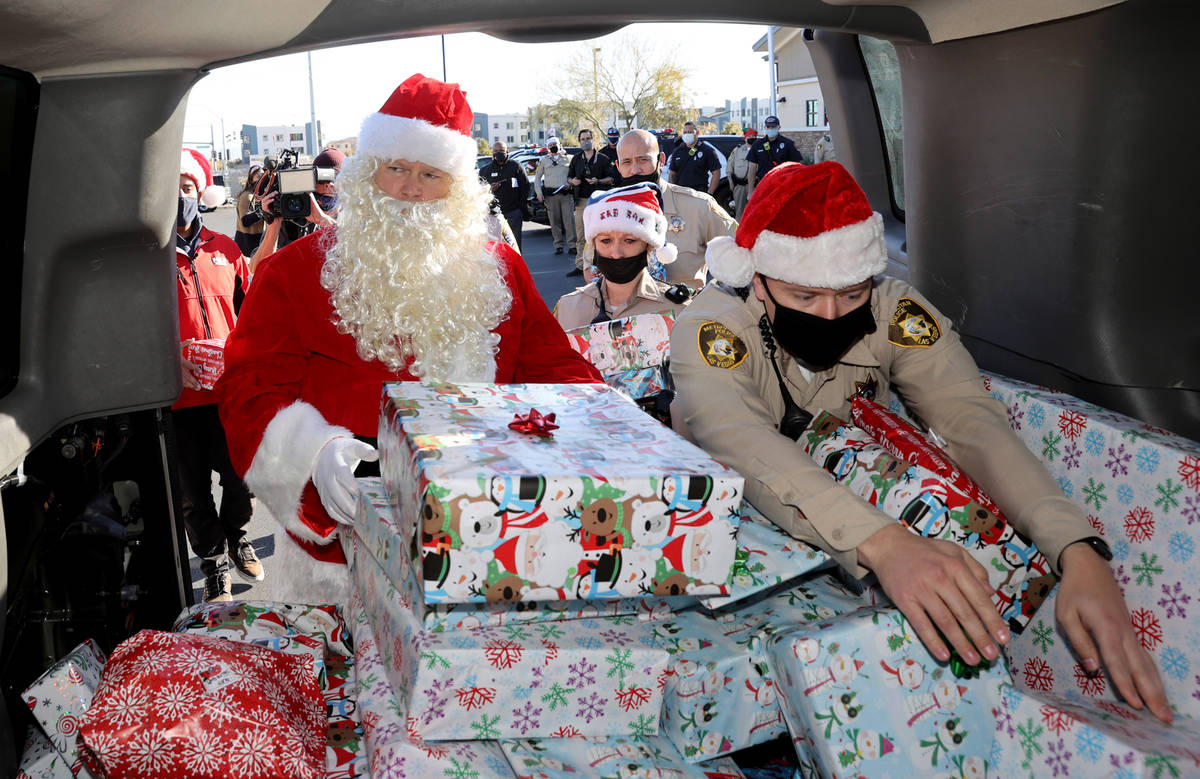 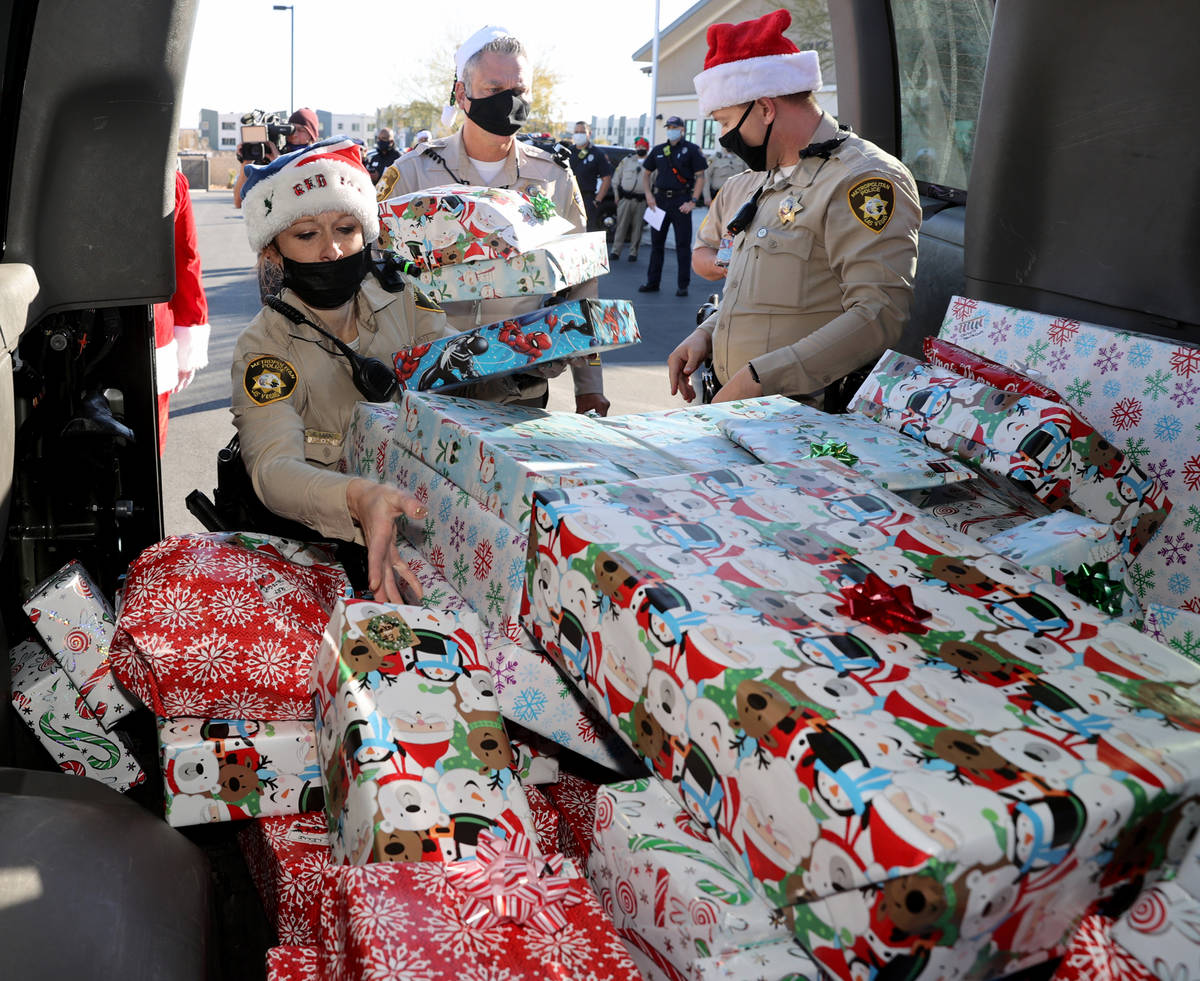 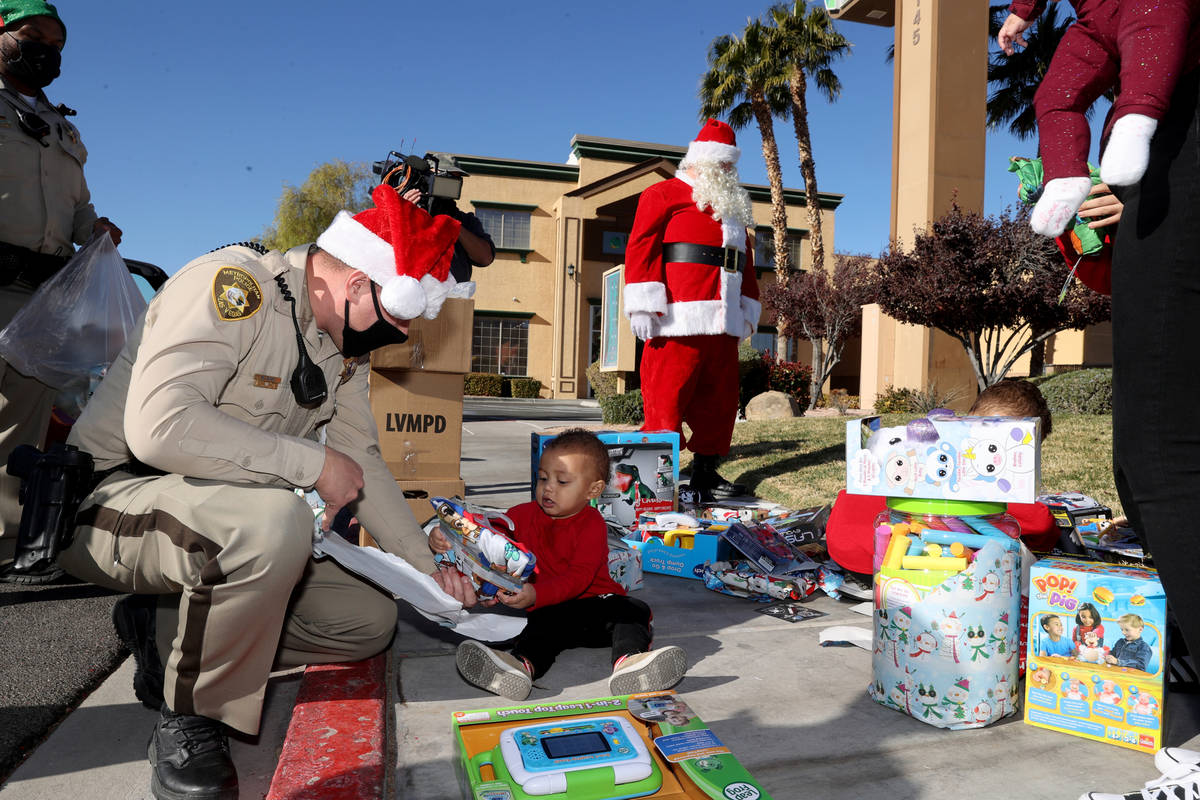 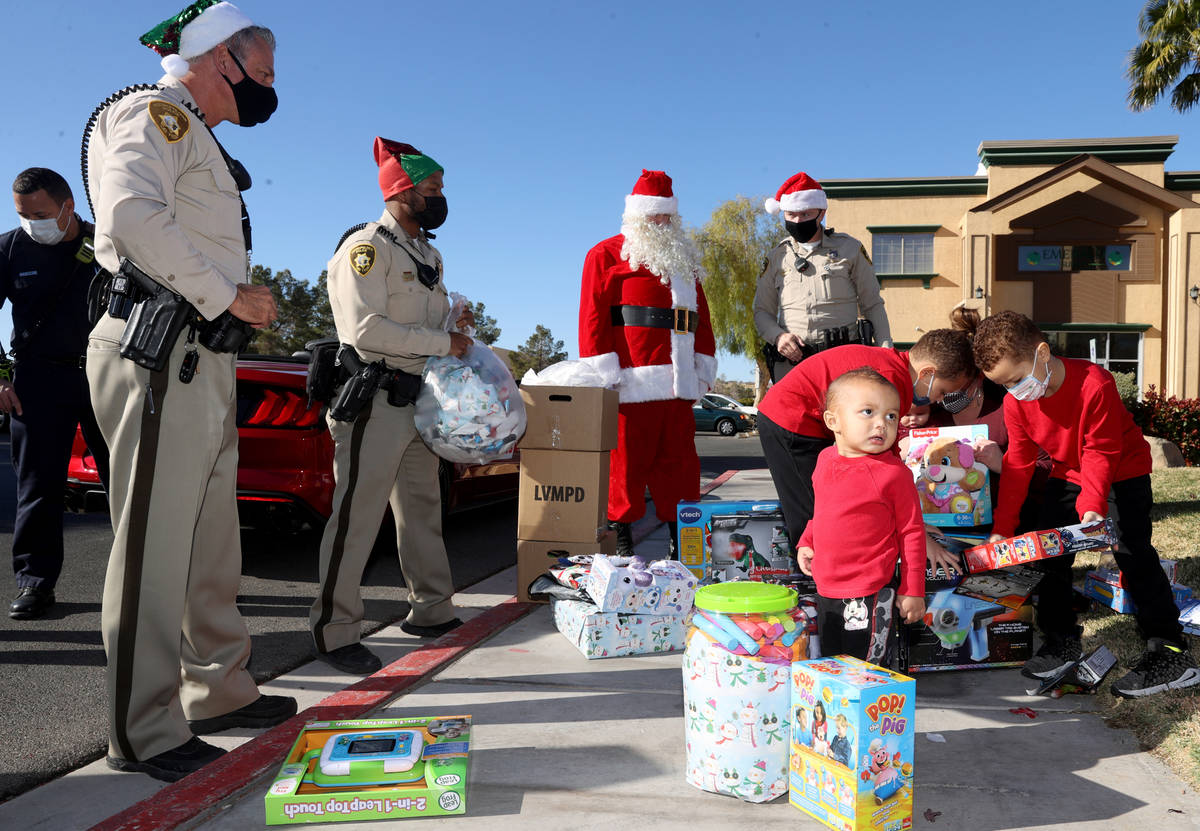 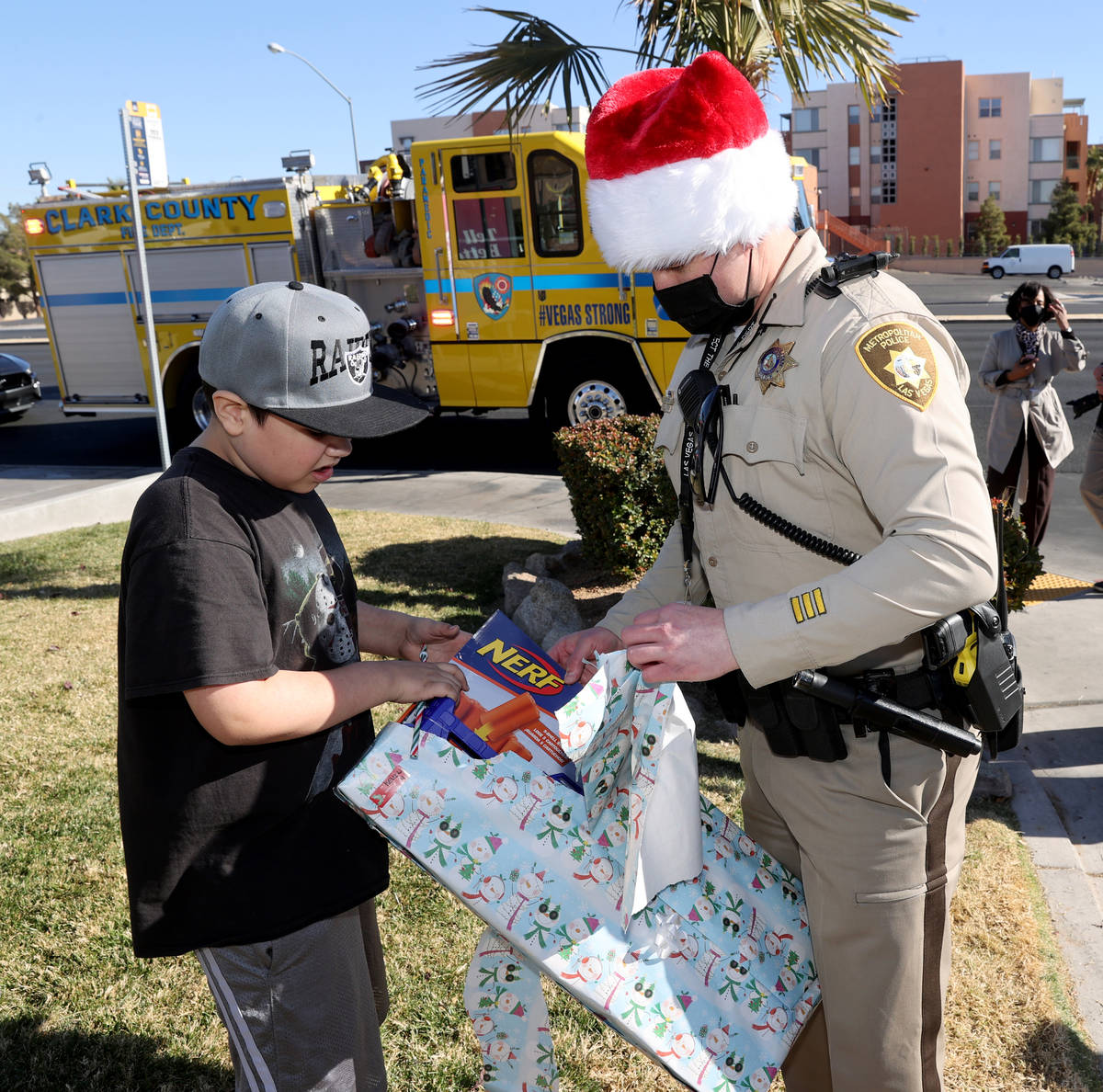 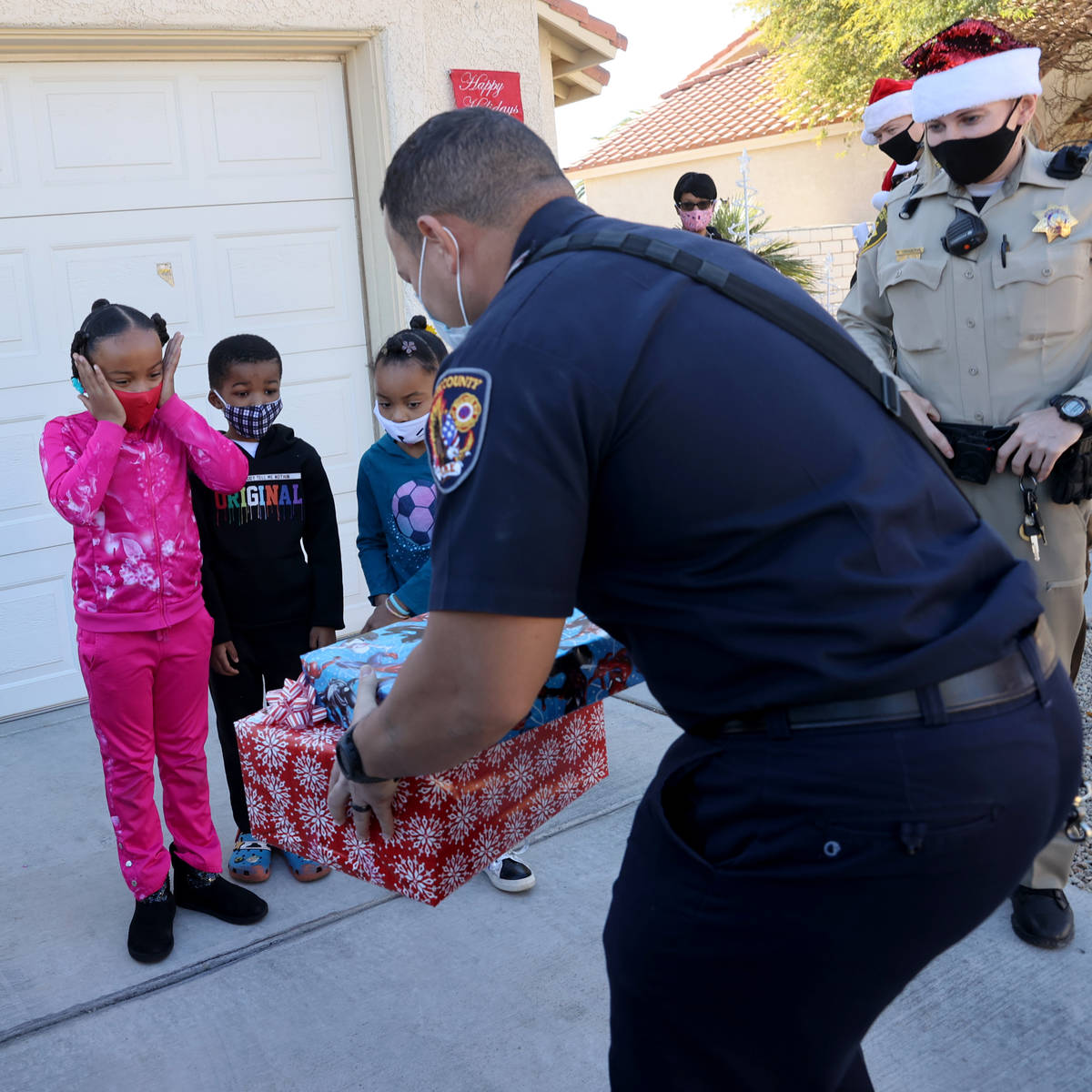 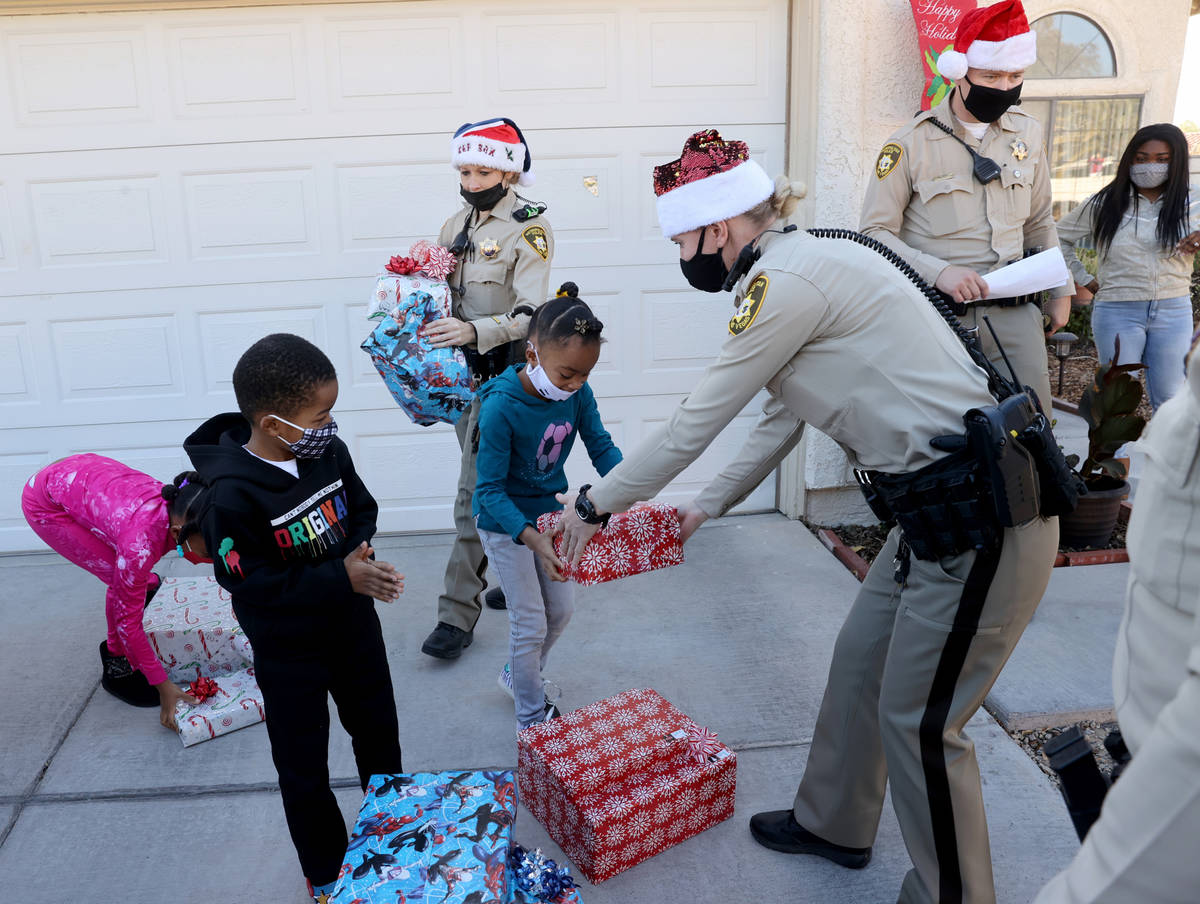 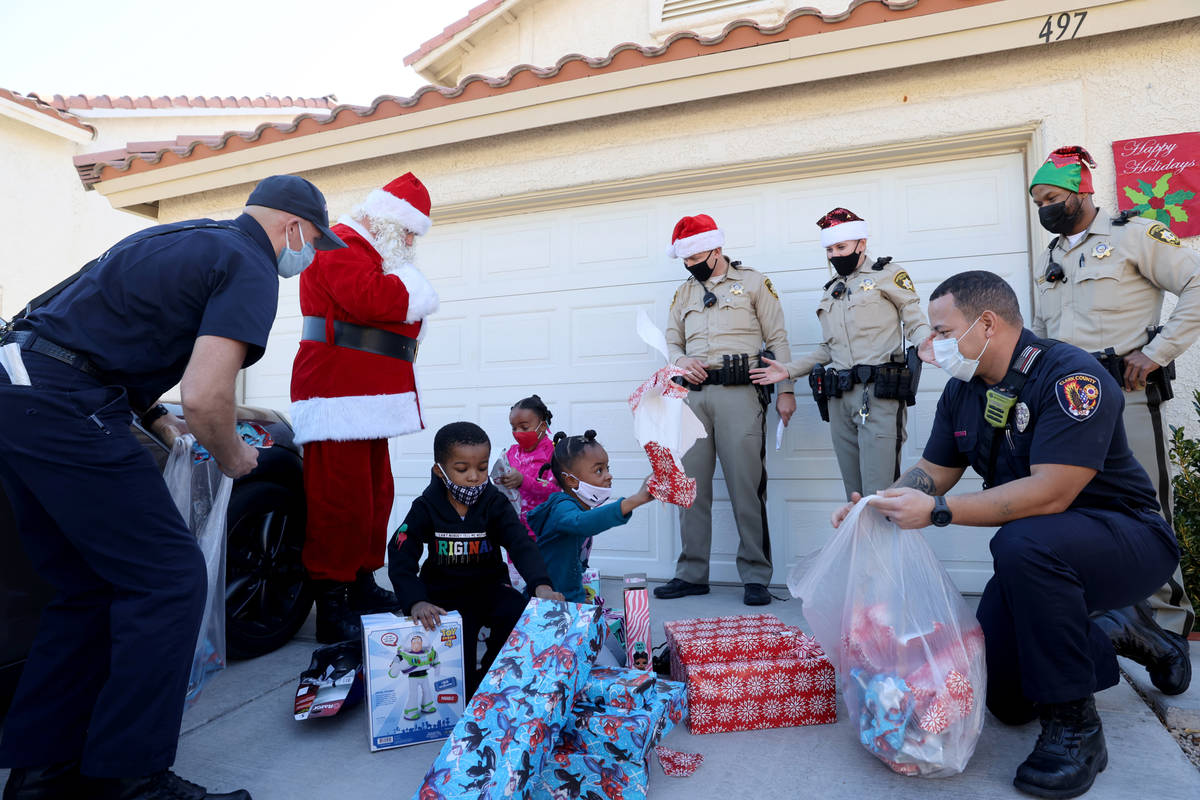 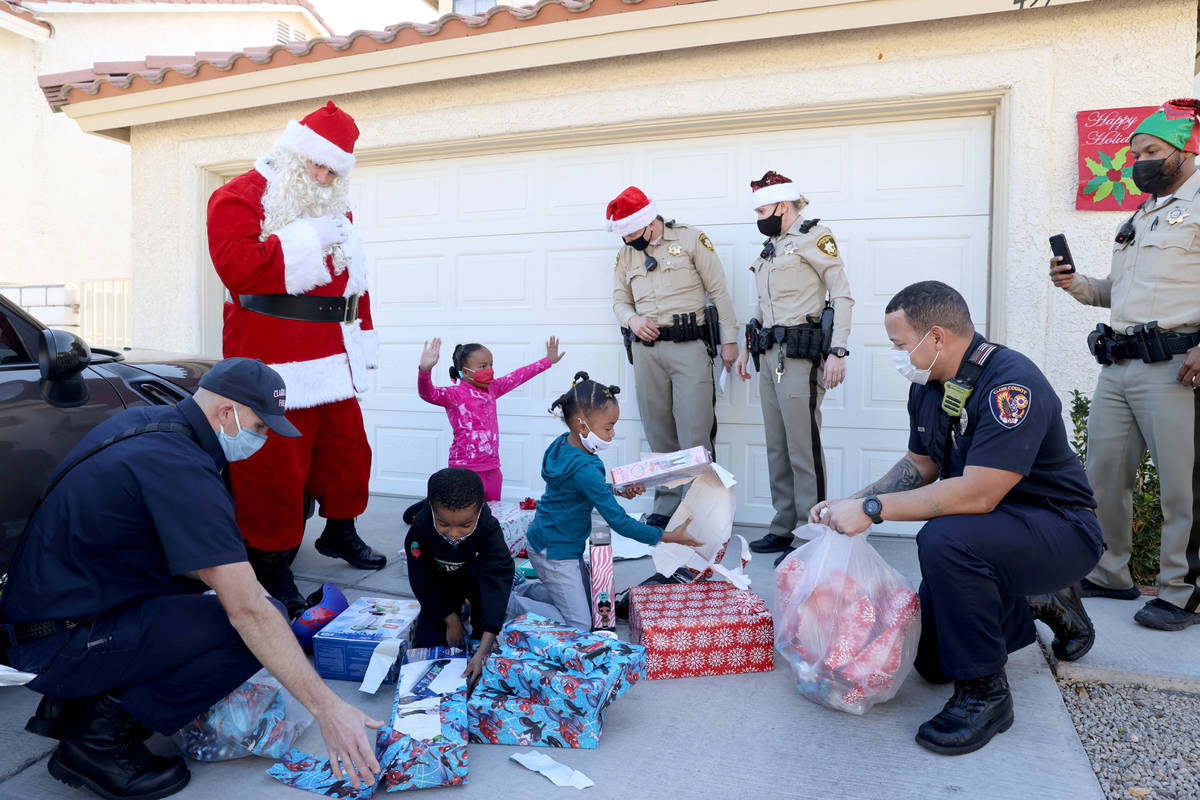 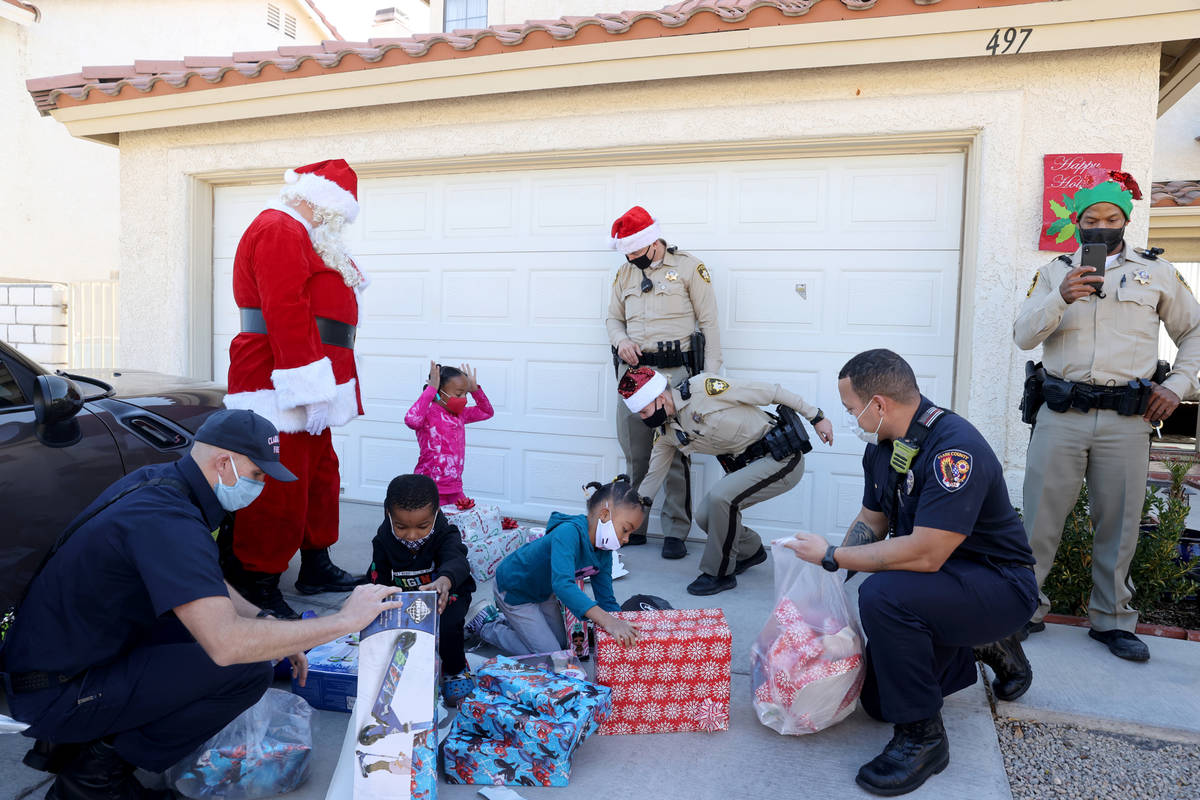 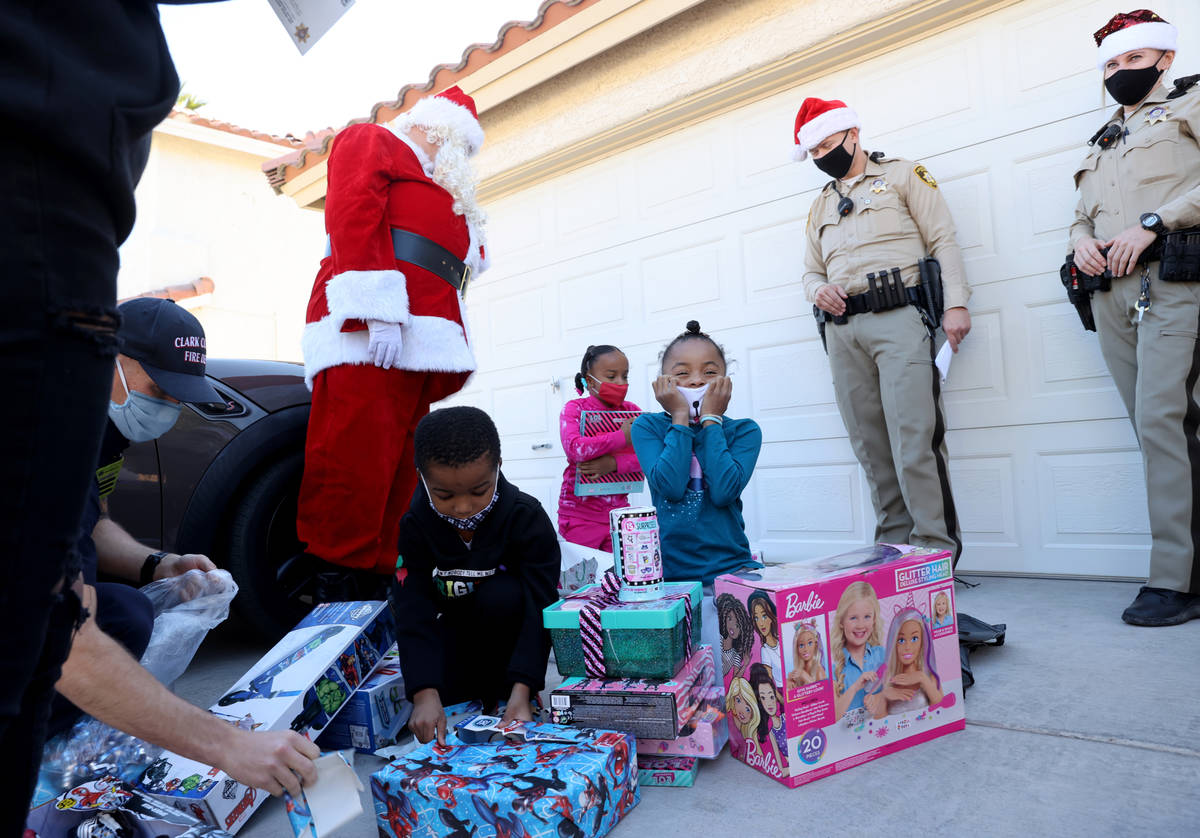 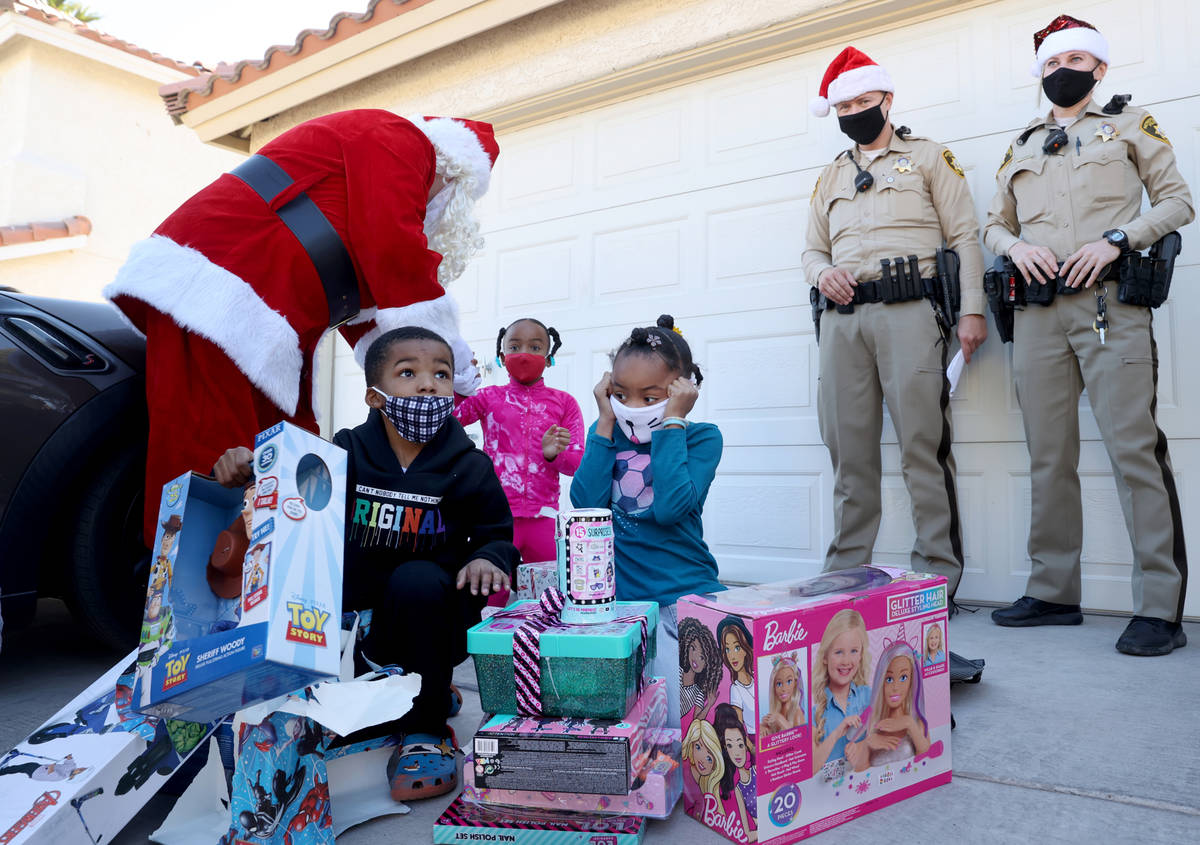 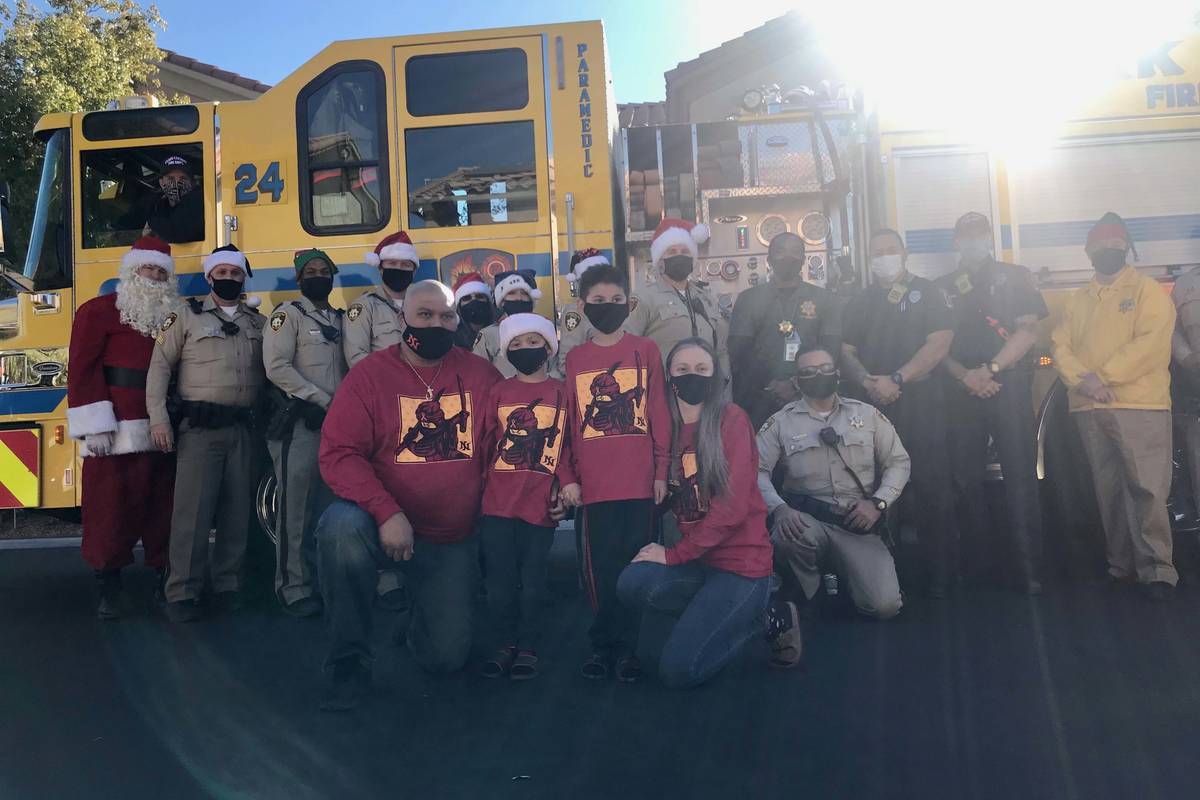 Holly and Terrance Paet and their kids Aiden, 8, and Nathan, 5, who is battling cancer, stand with gifts they received through the Santa Cops program. (Mya Constantino/Las Vegas Review-Journal) 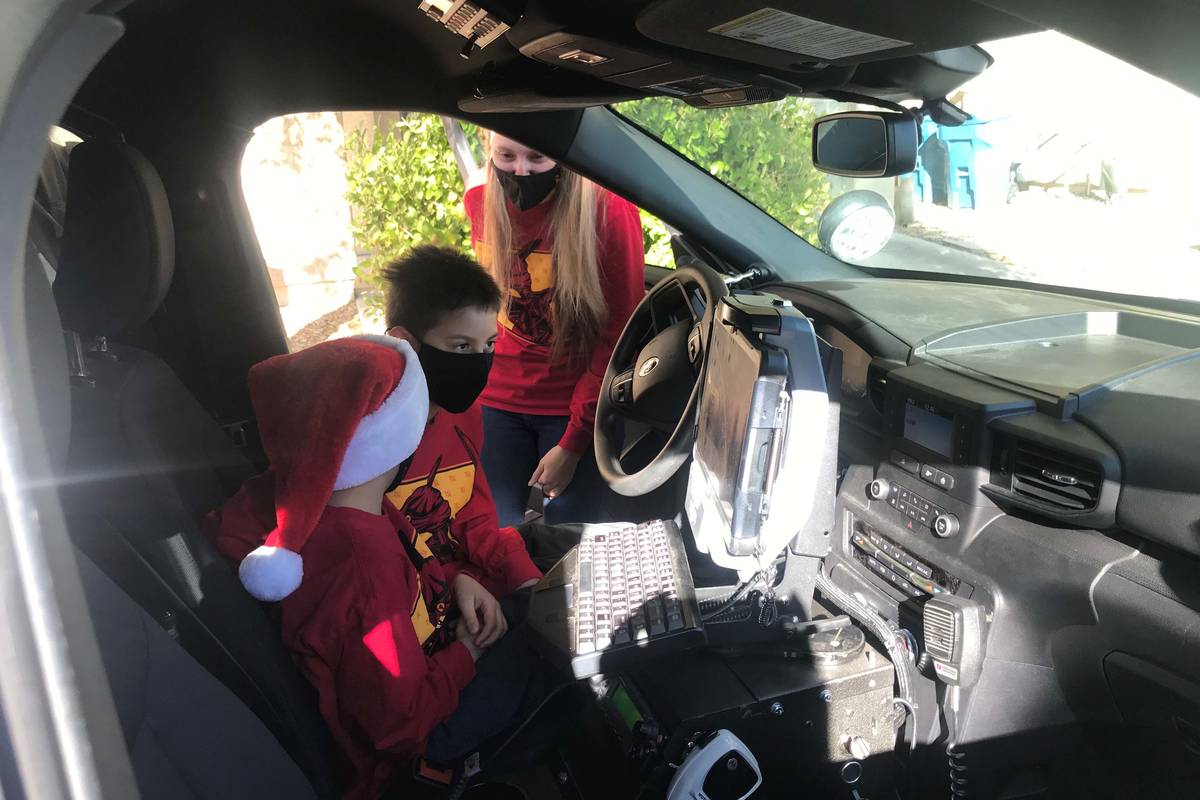 Nathan, 5, and Aiden, 8, sitting in a police car during the Santa Cops toy caravan drop off. (Mya Constantino/Las Vegas Review-Journal) 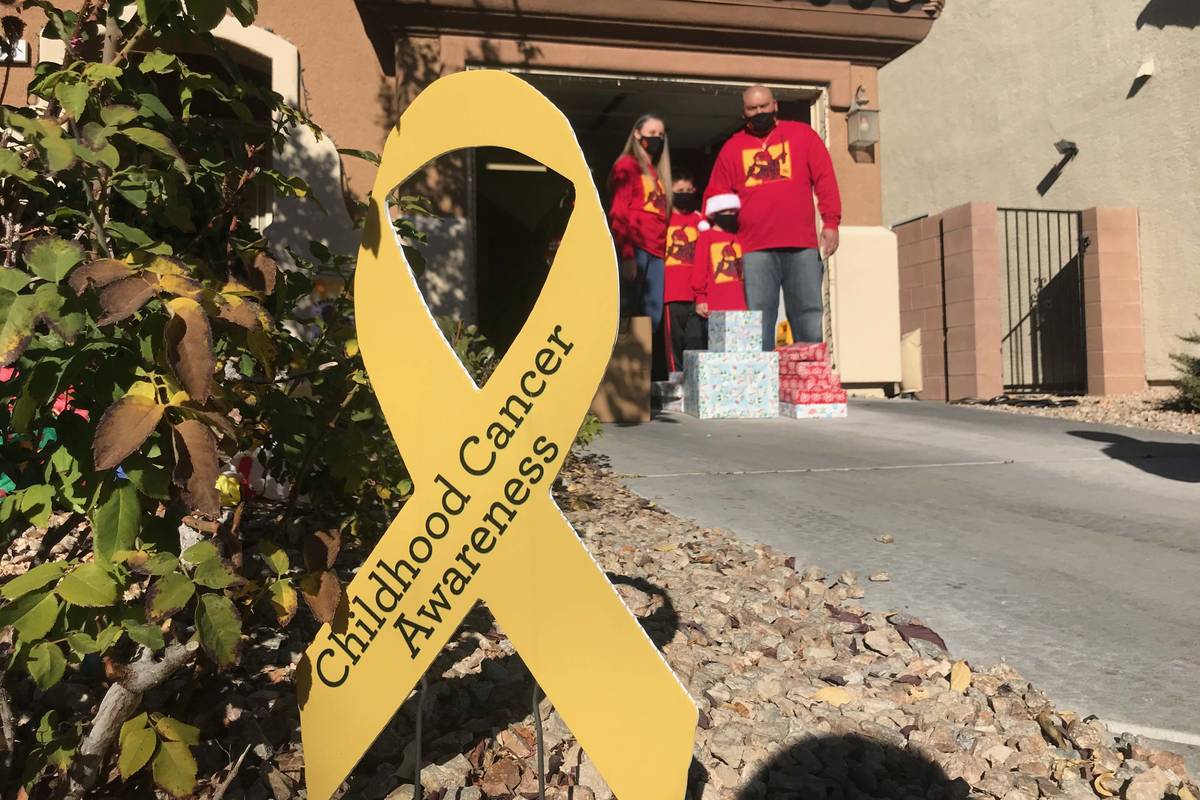 Christmas wrapping paper flew into the air Wednesday after police officers delivered 115 Christmas presents to 16 kids and their families in need through the Santa Cops program.

The Metropolitan Police Department program allows hundreds of kids to select holiday presents for themselves and their families every year.

Officers of the Metro’s Enterprise area command, one of 10 commands delivering toys this month, along with Santa, a firetruck, and a caravan filled with wrapped toys drove through the Las Vegas Valley to bring a dash of holiday cheer to each nominated family.

Police car sirens heralded the arrival of the caravan at the home of the Paet family. Two wide-eyed brothers, 8-year-old Aiden and 5-year-old Nathan, stood staring at the colorfully wrapped presents on their driveway.

The event brightened the spirits of the family, especially Nathan, who is battling leukemia, said their dad, Terrance Paet. Nathan is currently seven months into a three-year treatment plan.

“This means so much to us,” Paet said. “This truly lifts his spirit up and will keep him strong.”

Paet said Nathan’s immune system is shot since he started his chemotherapy and he is unable to do much because of it.

“Nathan always asks me, ‘Once we’re done with cancer, can we go out and play?’” the boy’s father said. “He wants to be a normal 5-year-old, again.”

He and his wife, Holly, said their work hours have fallen short since the start of the pandemic, making it challenging to keep up with the costs of Nathan’s treatment.

“This is so special to us,” Holly Paet said. “It’s incredible how much our community has shown up for us through all of this.”

Based on what the boys liked, Nathan and Aiden received three sets of Legos, Nerf guns, “The Mandalorian” toys and Hot Wheels tracks. With big smiles, the boys later hopped into a police car and a firetruck.

The Santa Cops program has operated for nearly three decades. In past years, officers have shopped with kids at a local Walmart but due to COVID-19, things were different this year. Instead, officers from 10 area commands shopped for Christmas presents and delivered them to families they nominated.

The program began Tuesday and will run through Dec. 23. Officers from the area commands will drop off toys to more than 74 families, totaling 200 children. Donations were sponsored by Las Vegas Raiders, Ford Country and Walmart.

“If we can do a little bit to help these kids, then that’s what it’s all about,” Metro Sgt. Chris Hubbard said.