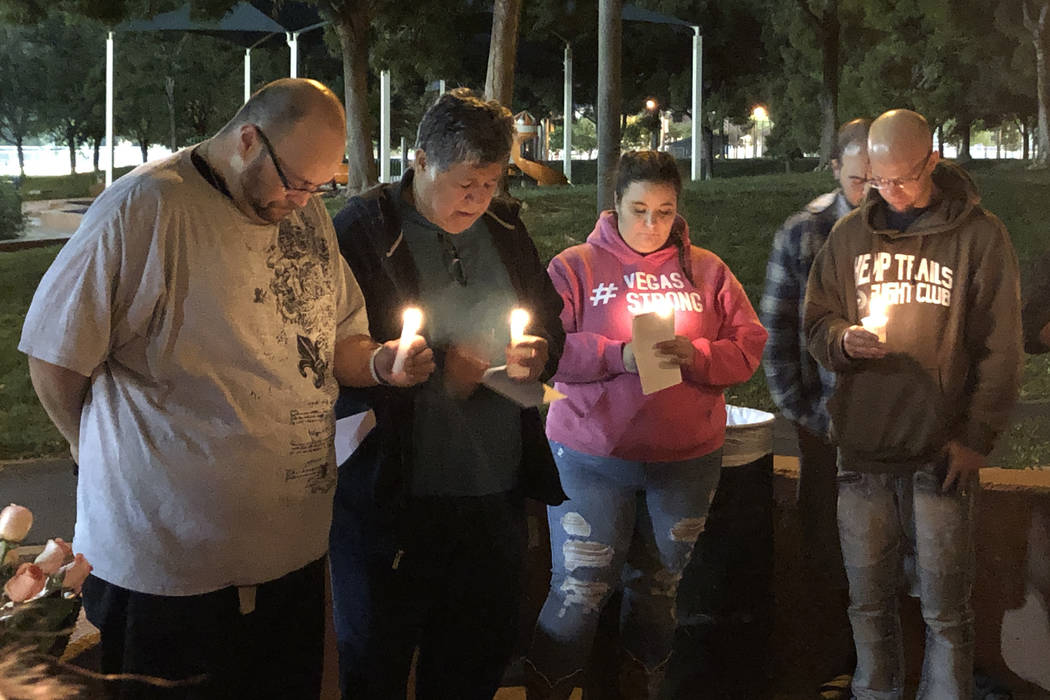 Levon Zeron, left, the younger brother of Renai Palmer, stands next to his father, Jose Zeron, during a vigil on Tuesday, October 15, 2019, for his sister. Renai Palmer and her son, 6-year-old Gavin Palmer, died in a house fire on Oct. 8. (Katelyn Newberg/ Las Vegas Review-Journal) 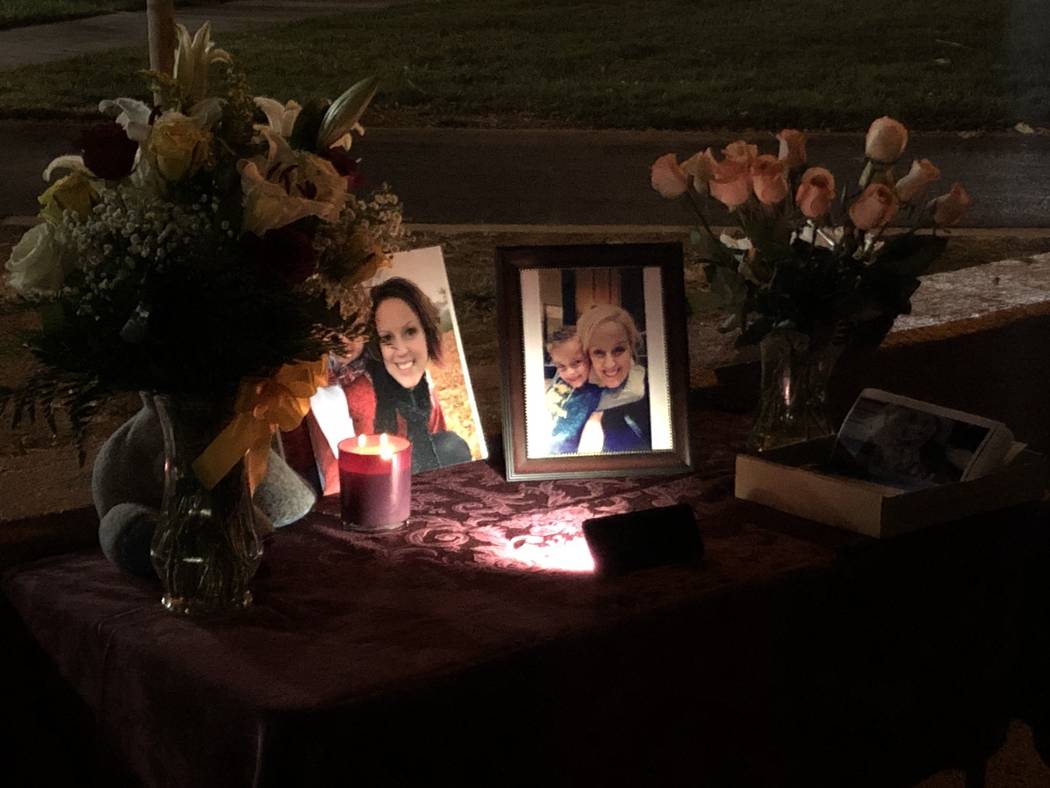 Pictures and flowers were lined up Tuesday, October 15, 2019, during a vigil for 47-year-old Renai Palmer and her son, 6-year-old Gavin Palmer. The two died in a house fire on Oct. 8 at a west Las Vegas Valley home. (Katelyn Newberg/ Las Vegas Review-Journal) 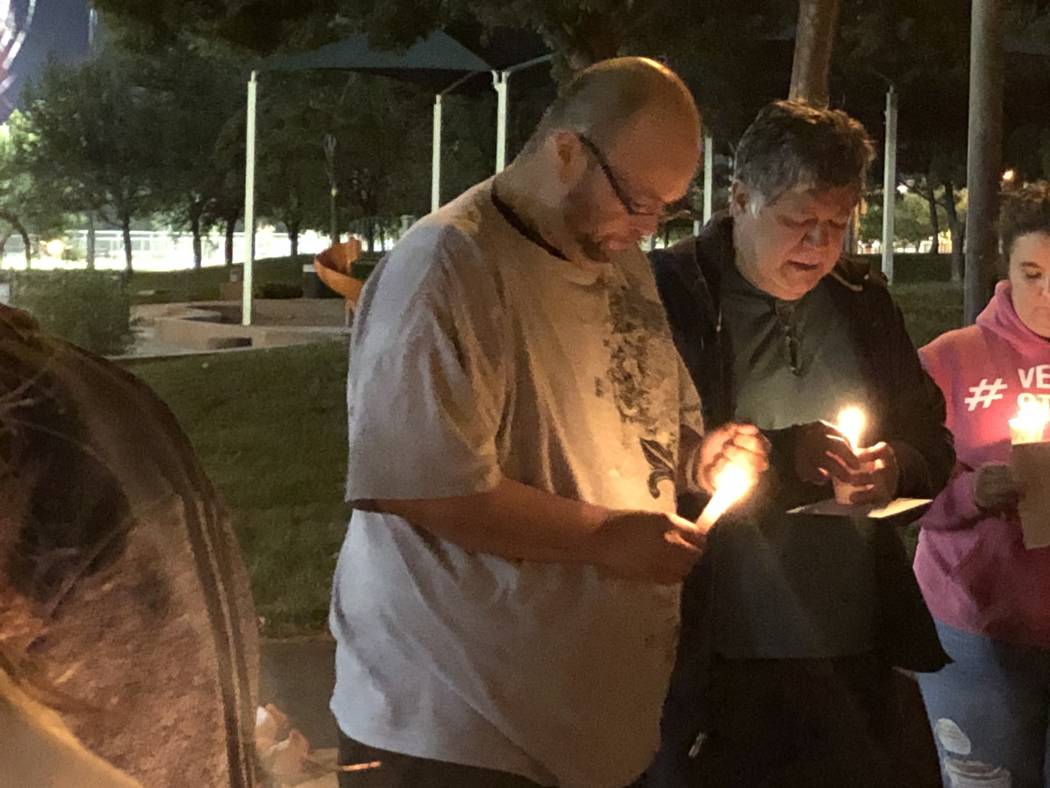 Levon Zeron, left, stands next to his father, Jose Zeron, during a vigil for the 42-year-old's sister, Renai Palmer, on Tuesday, October 15, 2019. Renai Palmer and her son, 6-year-old Gavin Palmer, died in a house fire on Oct. 8 at a west Las Vegas Valley home. (Katelyn Newberg/ Las Vegas Review-Journal)

A week after Renai Palmer died, her friends and family gathered in a west Las Vegas Valley park to celebrate the “fierce” woman who loved her son more than anything else.

“Gavin was her life; he was so bright (and) made her feel so happy,” Levon Zeron, Palmer’s younger brother, said after a vigil for the mother and son on Tuesday night at Rainbow Family Park.

The 47-year-old mother and her son, 6-year-old Gavin Palmer, died Oct. 8 in a house fire in the west valley. About 8:20 that morning, Las Vegas firefighters pulled the pair from the fire inside an upstairs bedroom in a two-story custom house at 1930 Fox Canyon Circle, near South Cimarron Road and West Sahara Avenue.

Gavin lived there with his mom, and the house is owned by Zeron’s father, the 42-year-old said Tuesday night.

The Las Vegas Fire Department said last week that Gavin’s uncle was found just outside the home and was hospitalized after suffering smoke inhalation. Zeron confirmed he was the person who was injured.

“I tried to do what I could to protect my family; it was a very difficult situation,” Zeron said.

As of Tuesday afternoon, the Clark County coroner’s office had not released a cause and manner of death for Palmer and her son. Fire Department spokesman Tim Szymanski said Thursday that it may take investigators at least a month to determine the fire’s cause.

Szymanski said the department has sent “several things” to be tested at a lab, and that the fire “is like a big jigsaw puzzle.”

Gavin’s father, 33-year-old Sean Murray, told the Las Vegas Review-Journal on Thursday that he was told by a fire investigator that a gas canister was found in the home.

Murray and Palmer ended their relationship when Gavin was 1. The two had joint custody of the 6-year-old, and Murray said his son stayed with him on weekends.

A vigil was held for Gavin on Friday night at Centennial Hills Park, 7101 N. Buffalo Drive.

On Tuesday night, Zeron said he wanted everyone to focus on the love that Palmer had in her life. He described his older sister as a fierce, passionate woman who loved to have fun.

He said Palmer was “unique.” She was a leap-year baby who loved cars, made her own coloring books with her brother and had a tattoo of a character from the animated children’s show “The Land Before Time.”

Nearly 60 people gathered in the park. In attendance were old roommates, fellow church members, bosses from when she was a bartender at a PT’s restaurant and co-workers from her recent job at a Trader Joe’s.

Friend Michelle Rubio told the crowd how Palmer was “a bright shining light” in her life.

“She was just so warm and just such an amazing mom,” Rubio said after the vigil. “I just wish she were still here.”

Zeron said seeing all of Palmer’s friends at the park on Tuesday night showed how his sister influenced those around her.

“It’s good to see that they really touched a lot of people, and we can all come together and show the love for her and Gavin,” he said. “They deserve it. They loved everybody.”