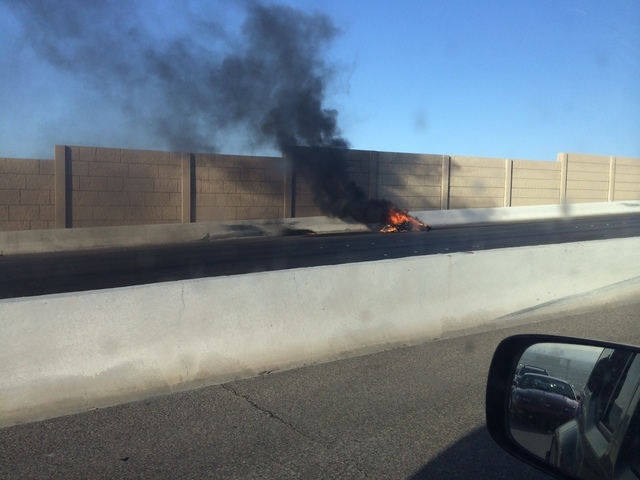 A motorcycle accident on U.S. Highway 95 is seen here. (Courtesy of Trevor Little) 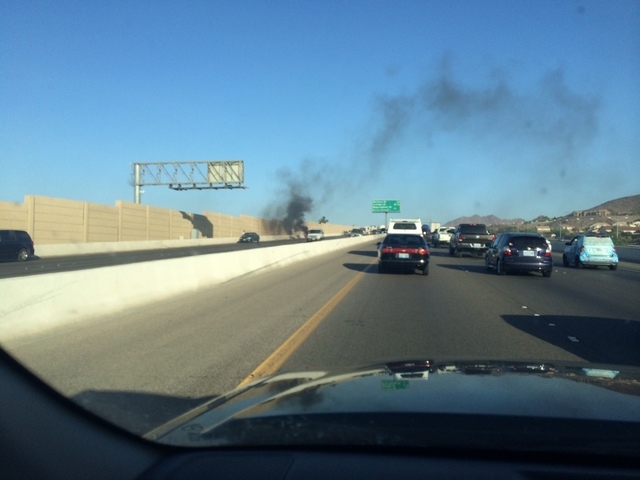 A motorcycle accident on U.S. Highway 95 is seen here. (Courtesy of Trevor Little)

A motorcycle rider died in a crash on U.S. Highway 95 Friday night.

The incident involved the motorcycle and two other vehicles in the northbound lanes near Horizon Drive about 6:10 p.m.

A Review-Journal reader submitted a picture of the motorcycle engulfed in flames and said he saw a body lying on the roadway nearby.

Nevada Highway Patrol spokesman Loy Hixson said the man riding the motorcycle was speeding and struck a Lincoln Navigator on the right, rear side before bouncing to the right and striking a Ford F150 truck on the left side.

The Ford continued north a bit until it struck a wall. The female driver of the Ford was taken to University Medical Center with injuries that were not life-threatening. The people in the Lincoln were not injured.

The motorcycle veered into the right shoulder, where the driver and the bike were separated. The motorcycle was propelled forward without a rider until it came to a stop and caught on fire.

The man was pronounced dead at the scene, Hixson said.

The Henderson Fire Department also responded to the wreck.

The northbound lanes of U.S. 95 were shut down for hours at Horizon while crews investigated and cleaned up. They were expected to be open 11 p.m.

The man’s identity will be released by the Clark County coroner’s office once his family has been notified.

This was the second motorcycle fatality in two days in which investigators believe speed was a factor.