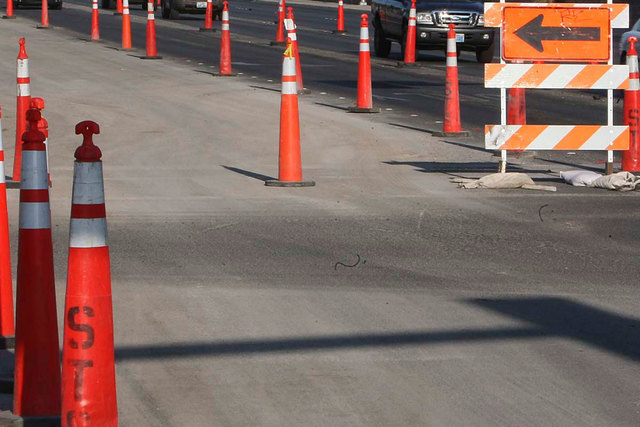 If you guessed Las Vegas Boulevard North, you’d be on the money.

The Nevada Department of Transportation on Wednesday unveiled plans for a 4.5-mile, $12.5 million overhaul of Southern Nevada’s best-known street, which doubles as state Route 604.

But tourists will have little to worry about. This portion of Las Vegas Boulevard, between Carey Avenue and Craig Road, has no megaresorts or even a major casino, unless you consider North Las Vegas’ old Opera House or Poker Palace properties.

Early next year, road crews will refurbish the six lanes of traffic that include northbound and southbound bus lanes with new pavement and safety features.

Work is expected to begin in January.

On Wednesday, the Transportation Department had its first public meeting to explain what is expected to be 11 months of lane closures and blocked driveways for dozens of North Las Vegas businesses, including a handful of stores where you can buy things for under a dollar and several trailer parks.

Few residences are along the street, but there is some access to apartment complexes that will be affected.

The cone zone will be close to, but won’t include, North Las Vegas City Hall and Nellis Air Force Base.

Project coordinator Kevin Maxwell, in a brief, lightly attended presentation, said the project is all about safety.

The department looks to reduce “conflict points” — locations where traffic crossings and merges are most likely to cause an accident — by 81 percent. There are 86 conflict points identified along the construction zone.

The project is described as a mill and repair in which the entire paved surface will be removed down to the base and replaced. Bus lanes on the outside edges of the road will be rebuilt with sturdier concrete to stand up to the wear applied by the heavier vehicles.

Additional raised median barriers will be installed to prevent vehicle conflicts, sidewalks will be widened and access will be improved to the bus stops along the route. The project also will include bringing the pedestrian areas into compliance with the Americans with Disabilities Act.

Crews will install the concrete bus lanes first, resulting in some business driveway closures. The department promised to keep at least one business access open at all times.

It’ll be a little trickier for businesses with a single entry point. At those locations, half the driveway will be closed at a time to enable at least one vehicle to get in or out at all times.

Maxwell said because the route is along a mature area of Southern Nevada, there is above-average bus traffic and usage and the need for more handicap-accessible features. There’s also a preponderance of pedestrians, mopeds and scooters due to the low-income demographic of the area.

The boulevard project is the latest of the department’s efforts to achieve Zero Fatalities safe driving goals. According to department data, for the length of that project there have been 216 accidents resulting in 183 injuries and one fatality in the seven years the Zero Fatalities program has monitored it.

Maxwell said the department will advertise the project for bid in July and a bid is expected to be awarded to a general contractor in late summer or early fall with work to begin by January and completed by November 2016.