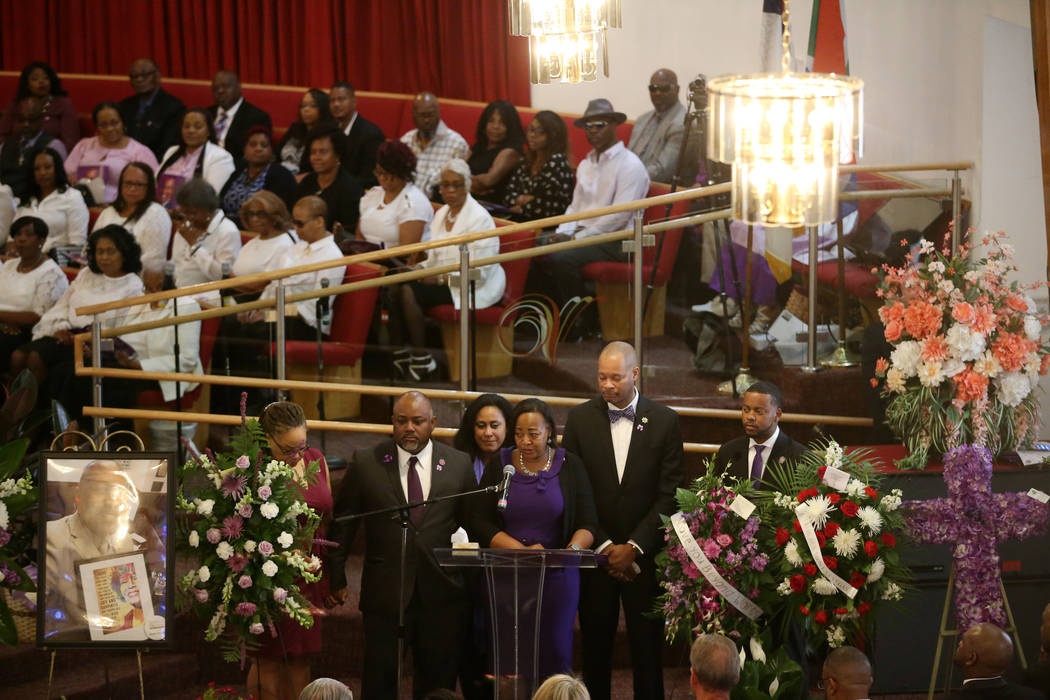 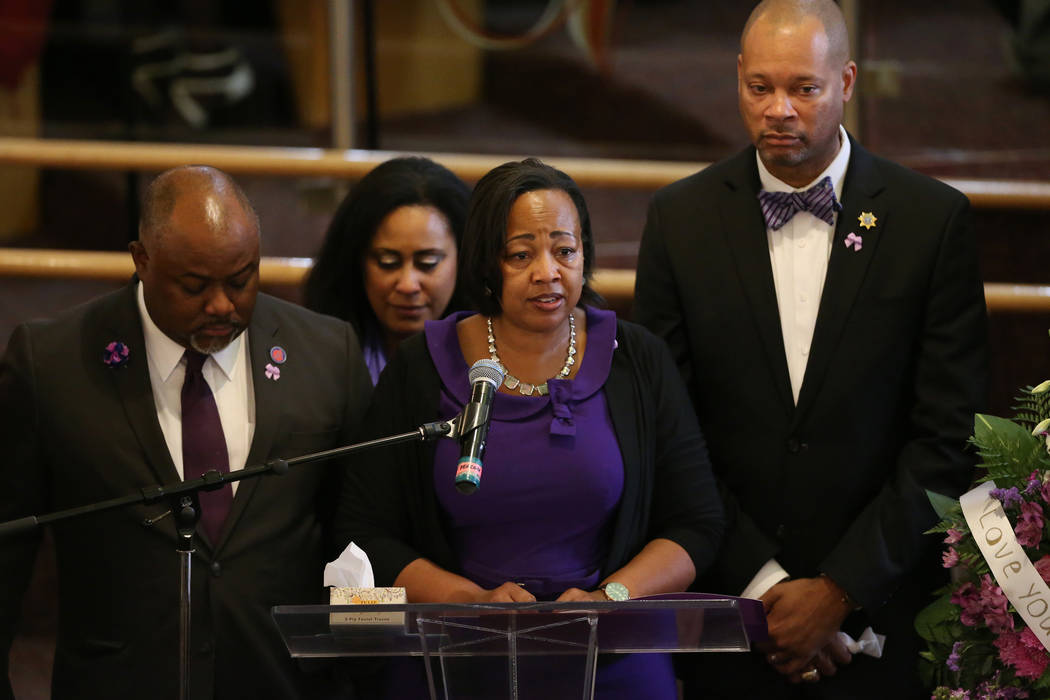 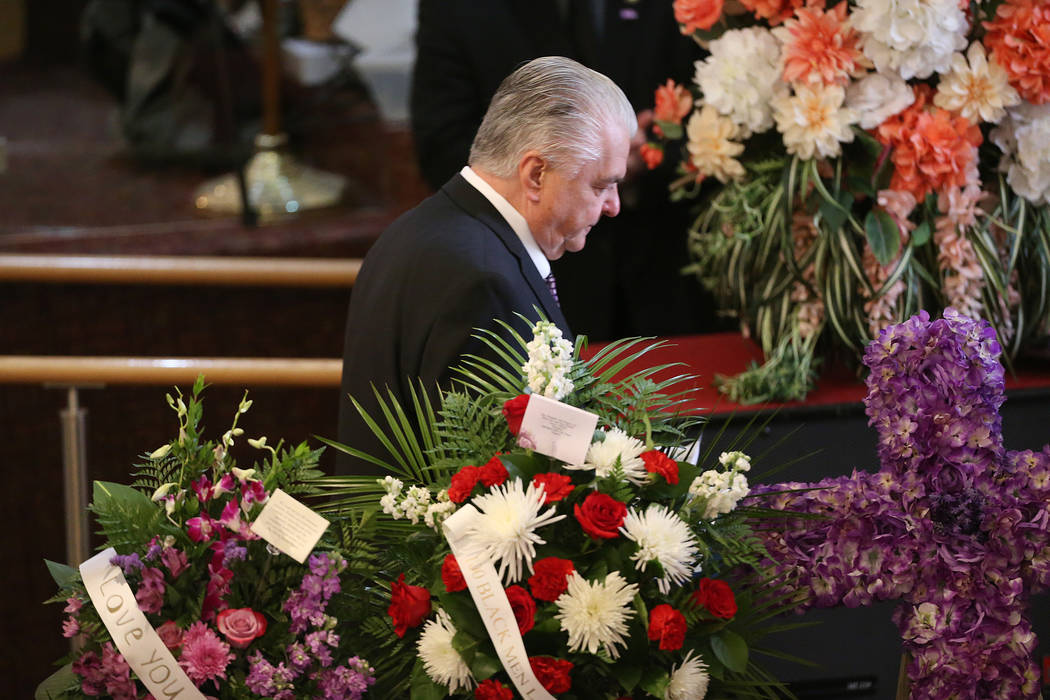 Nevada Gov. Steve Sisolak walks after speaking during the funeral service for Assemblyman Tyrone Thompson, who died May 4 at age 51, during his funeral service at Victory Missionary Baptist Church in Las Vegas, Saturday, May 18, 2019. (Erik Verduzco / Las Vegas Review-Journal) @Erik_Verduzco 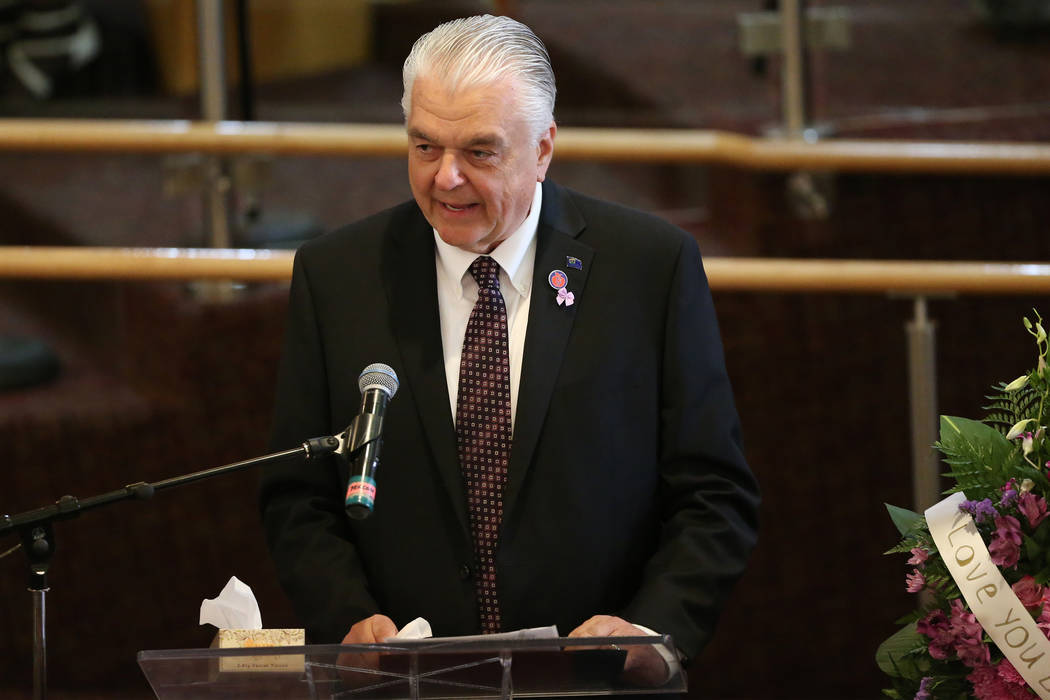 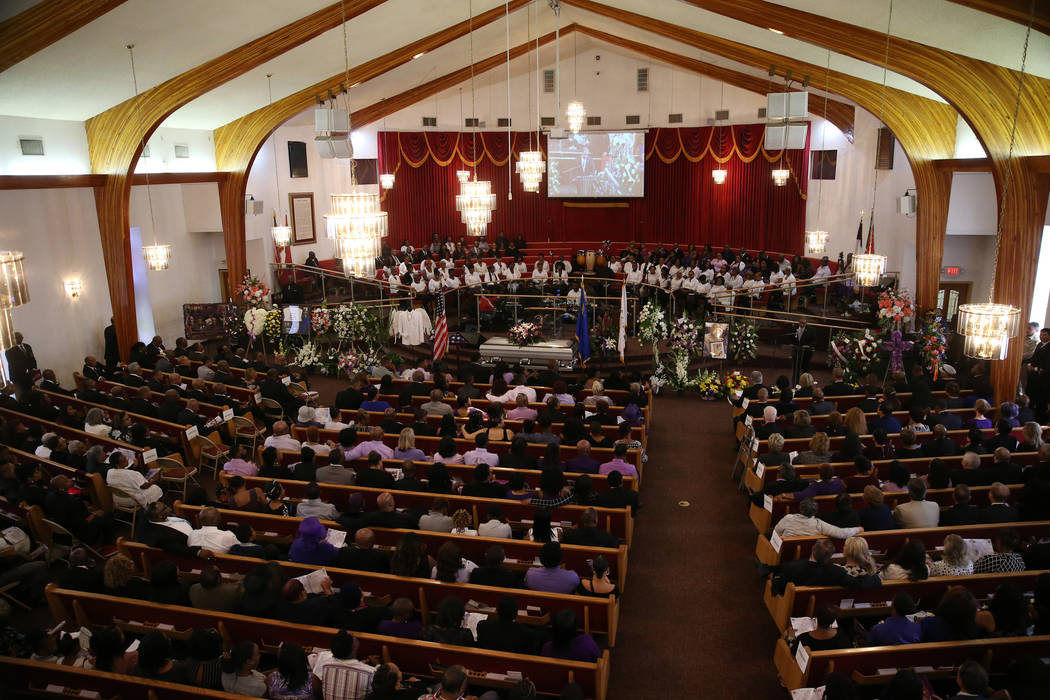 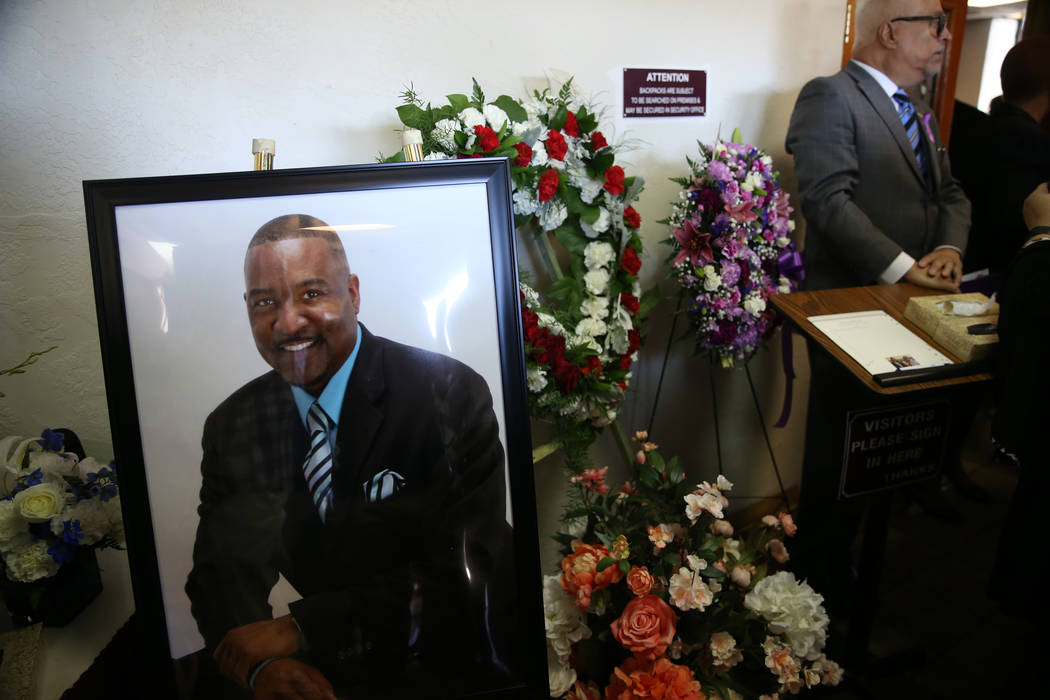 A picture of Assemblyman Tyrone Thompson, who died May 4 at age 51, during his funeral service at Victory Missionary Baptist Church in Las Vegas, Saturday, May 18, 2019. (Erik Verduzco / Las Vegas Review-Journal) @Erik_Verduzco 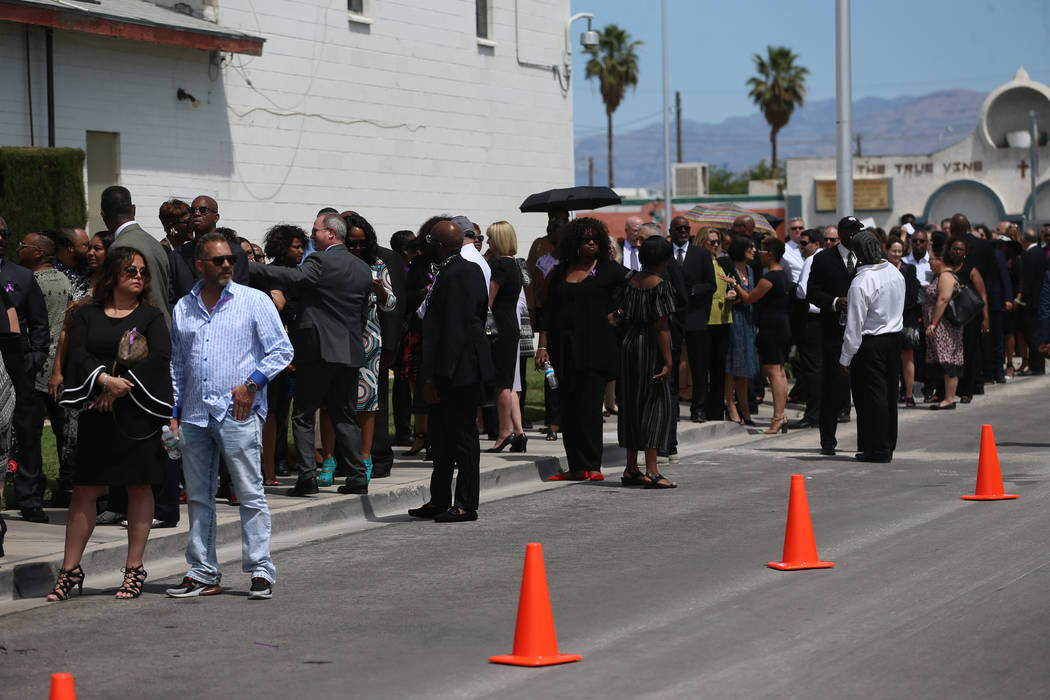 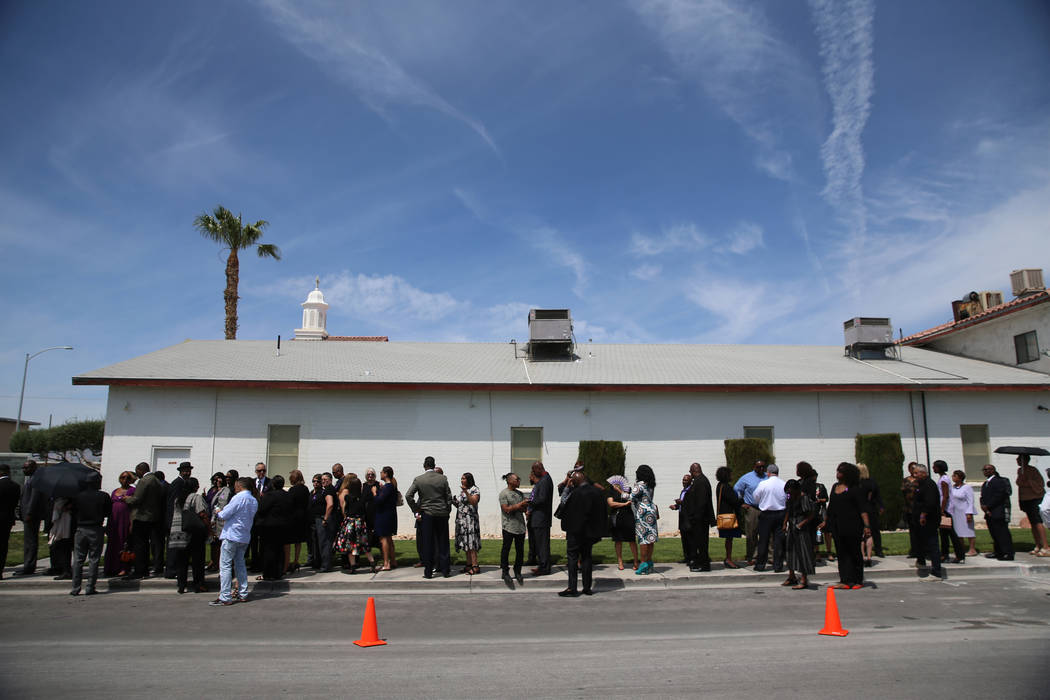 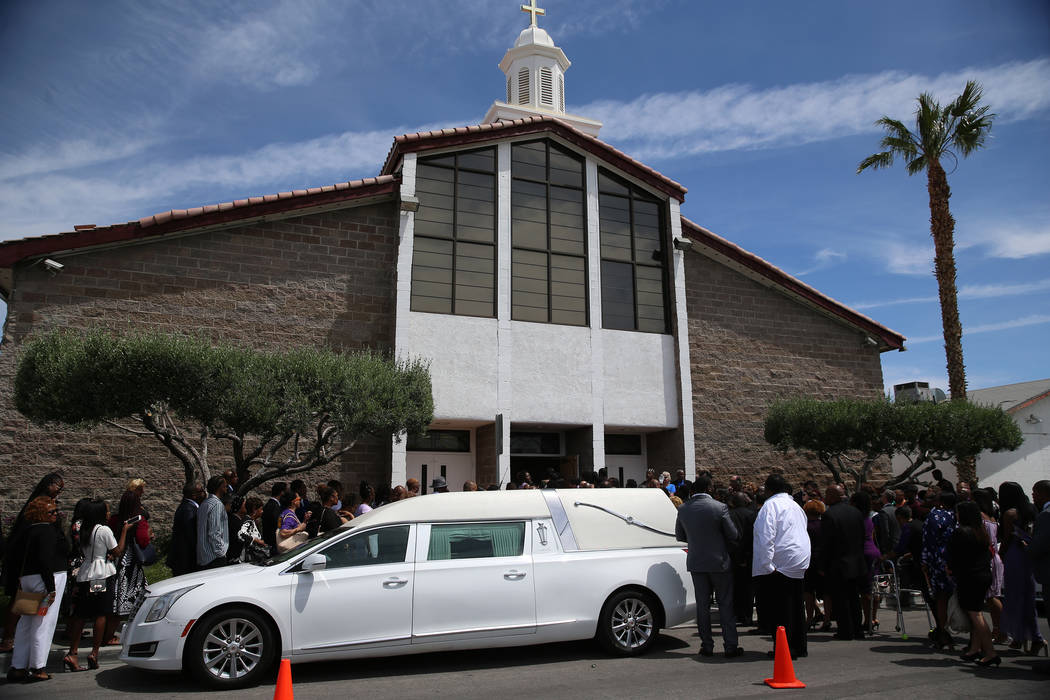 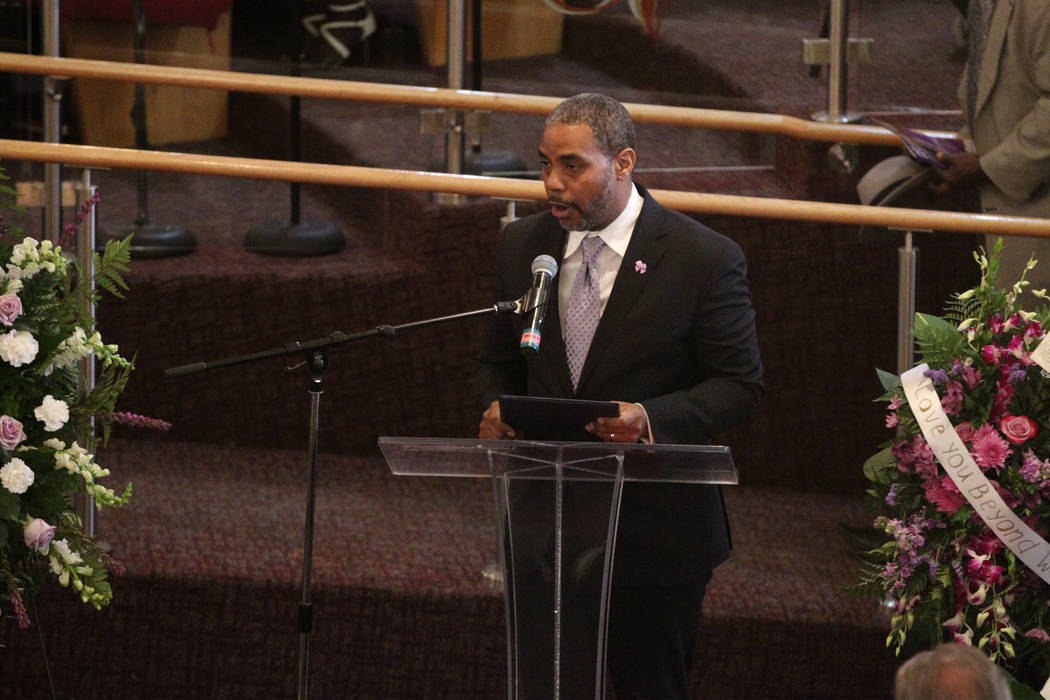 Assemblyman Tyrone Thompson was defined by his character, not his title, according to those who knew him.

Hundreds of friends, family members and residents gathered in downtown Las Vegas on Saturday morning to pay respects to the 51-year-old Democratic state lawmaker from North Las Vegas. Thompson died in Carson City on May 4 after falling ill.

Speakers at the service said that while Thompson’s life had been cut short, his effect as an advocate for education, the homeless and the North Las Vegas community seemed immeasurable.

People lined up around the block at Victory Missionary Baptist Church on Monroe Avenue to attend his homegoing service, filling the church’s chapel, balcony and multiple overflow areas. At the front of the chapel was a silver casket adorned with a bouquet of purple, pink and white flowers.

“Tyrone was always present to make the Nevada community and the people in it stronger,” U.S. Rep. Steven Horsford told the audience.

Thompson was born in Las Vegas on Sept. 30, 1967. He attended Valley High School and served on the student council before graduating in 1987.

Two years later, Thompson received a bachelor’s degree in criminal justice from Northern Arizona University. He later earned a master’s in organizational management from the University of Phoenix in 2000.

Thompson was appointed to represent North Las Vegas in the Nevada Assembly in 2013, and was re-elected three times. He was chairman of the Assembly Education Committee in the Legislature at the time of his death.

Despite his busy professional schedule, Thompson always kept time for his family and faith.

He served at Victory Missionary as an usher and youth mentor. His aunt Emma Soares said he organized family gatherings and never missed a baby shower or wedding.

Every Christmas, Thompson threw a sleepover for the children in his family. The theme of last year’s was the “Black Panther” superhero movie, and, true to his nature of being a perfectionist, Thompson had cardboard cutouts of the movie’s heroes ready to greet the children.

“Tyrone always made us feel like things are going to be OK,” Soares said.

“Tyrone’s legacy is the people he touched. The people he fought for,” Lee said. “The positive impact Tyrone has in North Las Vegas and Nevada will live on long past his days.”