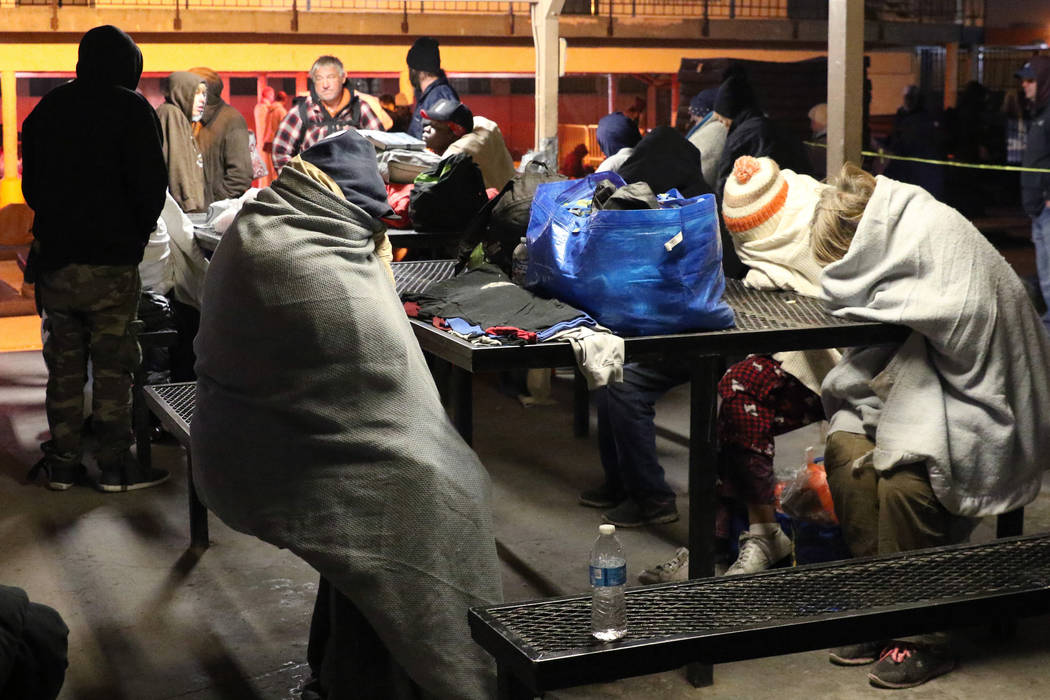 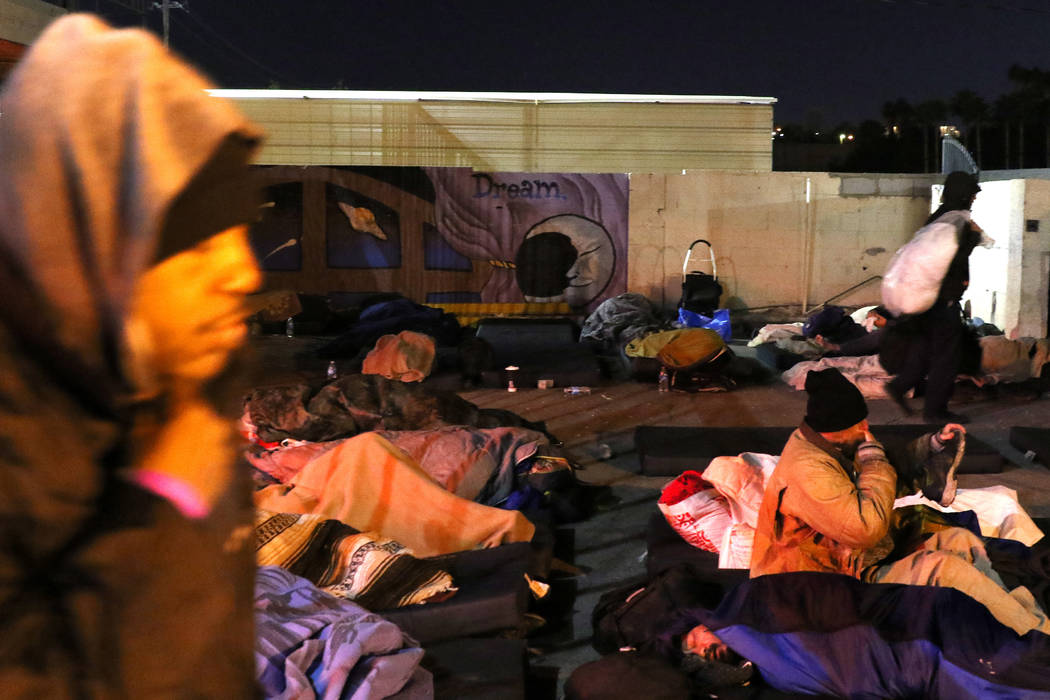 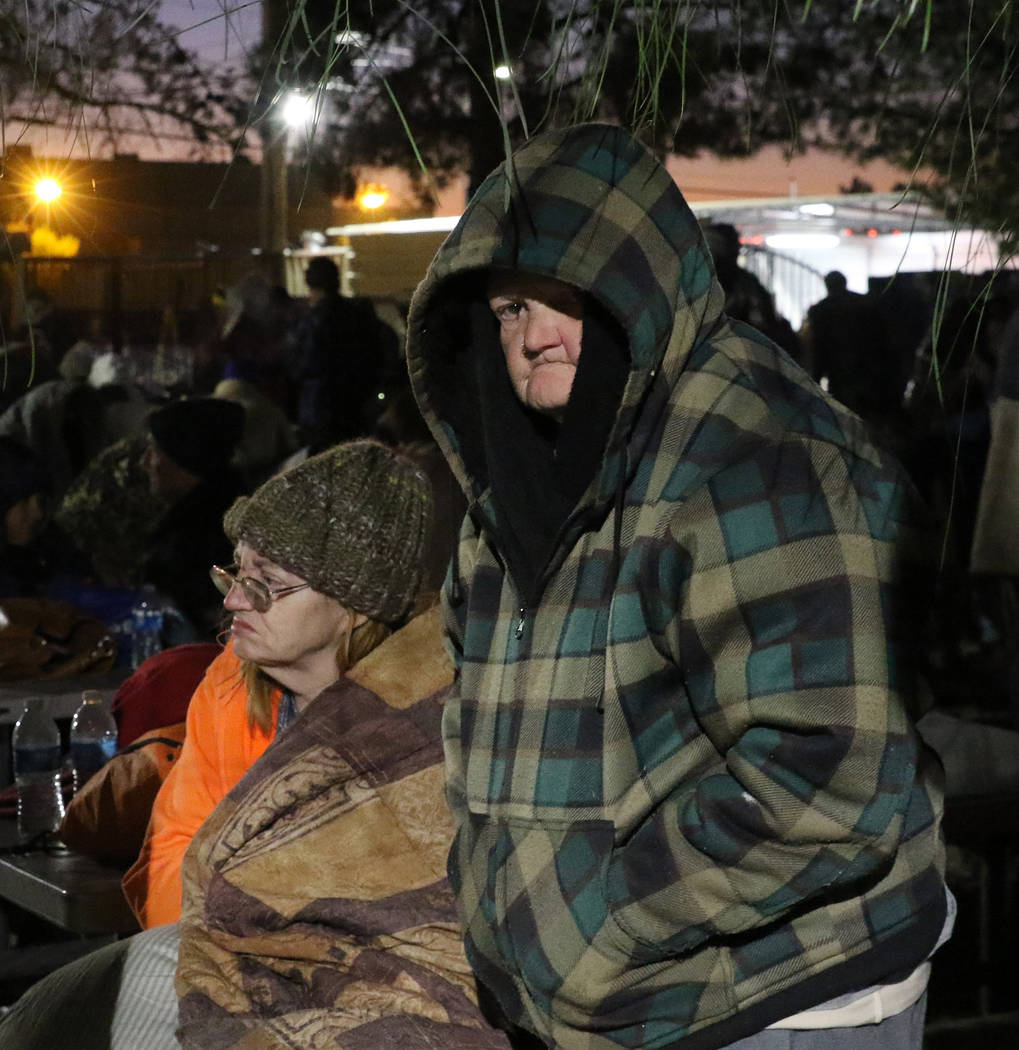 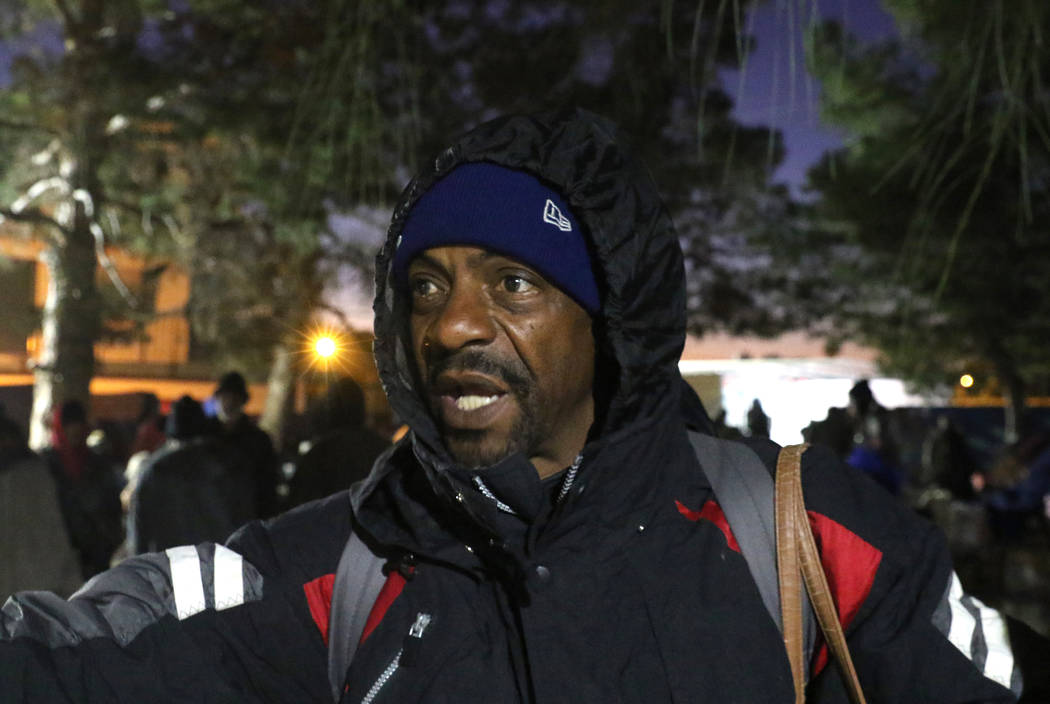 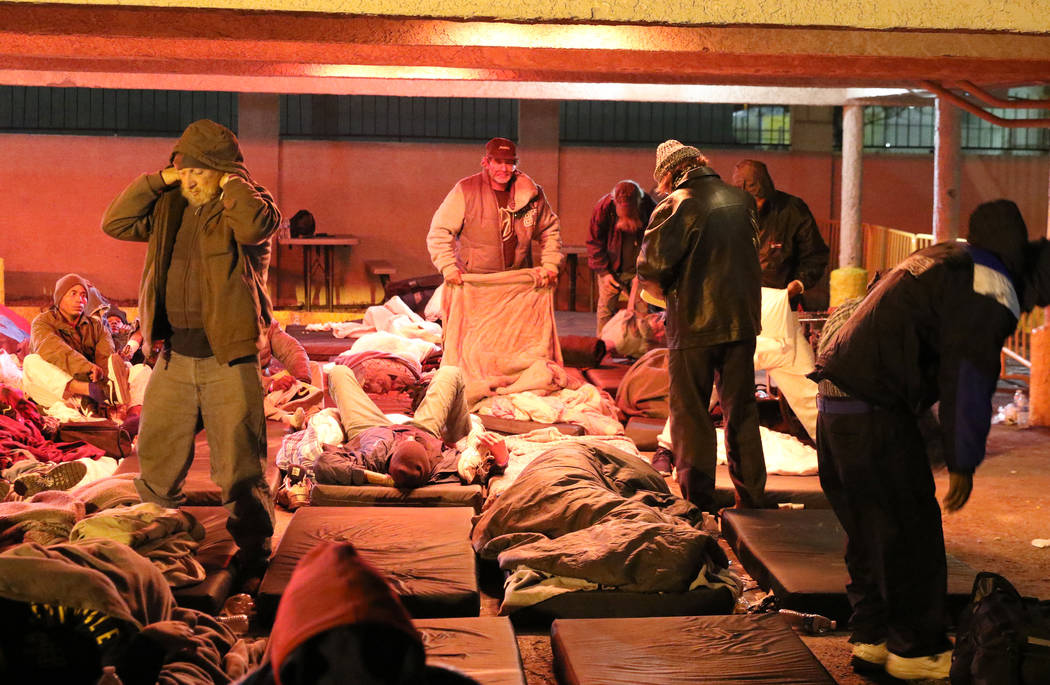 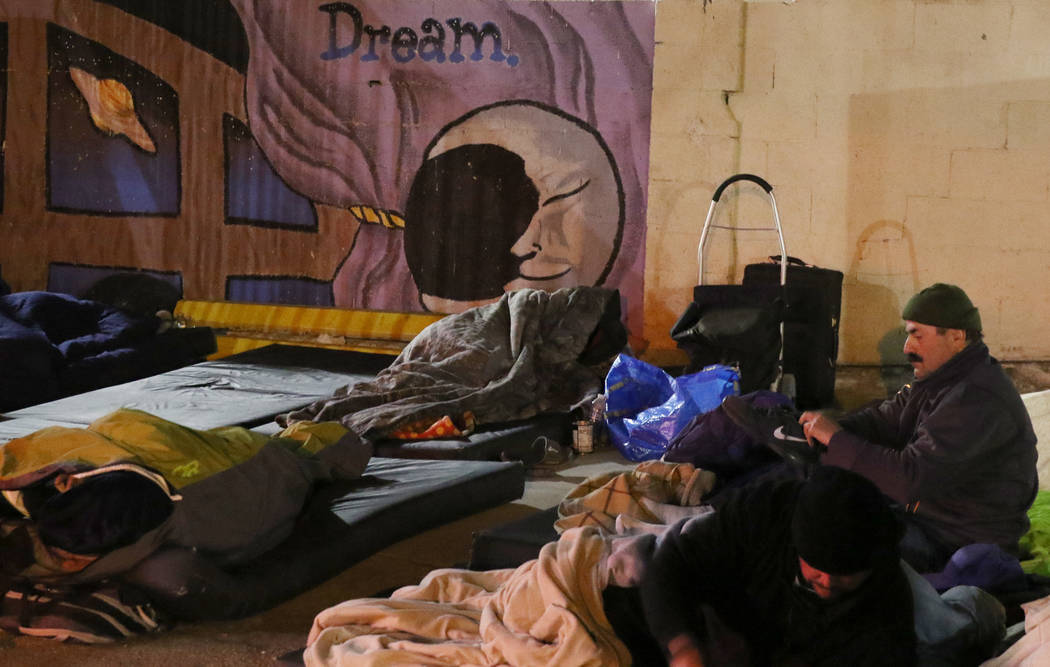 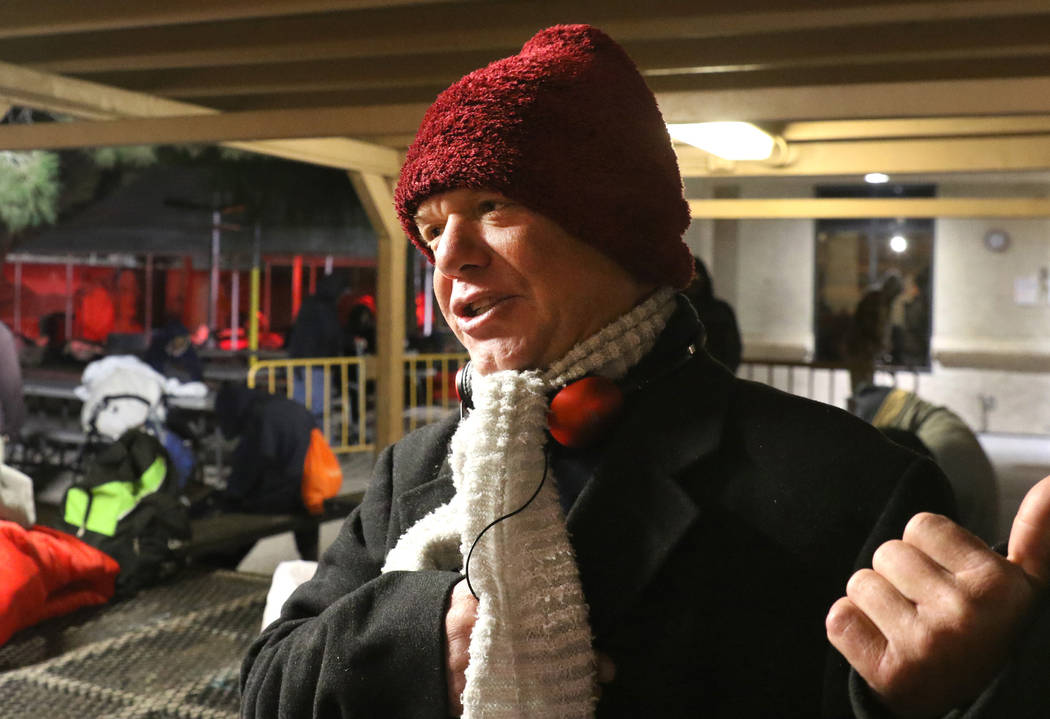 The city of Las Vegas’ Courtyard Homeless Resource Center was packed overnight, with about 200 people huddling for warmth to fend off near-freezing temperatures.

Rows of people slept on mats underneath overhead space heaters, though there were not enough of them to spread warmth to everyone. Many shivered. Some sat upright on the ground, smothered in blankets, heads down, waiting for the sun to arrive.

“I wear two layers of pants, and pretty soon it is going to be three,” Michael Olson, who has been homeless in Las Vegas since 2013, said around 5 a.m. Thursday.

Latoya Harwell said a sleeping bag given to her by a charitable woman Wednesday was a godsend.

“A lady pulled up and asked if anyone needed sleeping bags or blankets, and it just so happens that I was one of the fortunate ones who got a sleeping bag,” she said.

The crowded conditions at the city-run center for the homeless are certain to be a topic of discussion as the Las Vegas City Council takes up a proposed ordinance Wednesday that would make it illegal to camp and sleep in public areas downtown and in residential areas. If approved, it is expected that more people would need to access resources like the already-crowded outdoor shelter.

Olson, who said he has received nearly 30 trespassing tickets in Las Vegas, stays at the courtyard so he isn’t bothered by the police. He bundles up, gets near the heaters when he can and gets access to water and restrooms.

“I haven’t drank all week. Otherwise I’d probably die out here,” he said of the temperatures that dipped to 36 degrees overnight.

City spokesman Jace Radke noted that the ordinance would only be enforced if there are open beds or space available at area shelters, all of which are often at capacity.

“Our Community Services team has been working with the providers, Catholic Charities, Salvation Army, rescue mission, SafeNest as well. So the city has been having discussions with those groups and Metro police and the Department of Public Safety to work out the logistics on how that information will be disseminated to law enforcement on the street,” Radke said. “If you have a Metro officer who rolls up on someone … they need to know if there are beds available.”

In the meantime, he said, the Community Services team is trying to accommodate as many homeless people as possible.

“What they try to do is not to turn anyone away,” Radke said.

Several people interviewed at the courtyard Thursday morning said finding a place to stay overnight is a constant challenge, and they feel like police are already trying to shepherd the homeless to the shelter facilities along Foremaster and Las Vegas Boulevard North.

Jason Borne, 34, of Fargo, North Dakota, came to Las Vegas with a friend and intentions to get a job working on the new Allegiant Stadium. Instead, his friend got arrested, he couldn’t find a job and he’s been on the streets for seven months. He was staying behind a Walgreens but came to the courtyard after several encounters with police.

But Borne was under the impression the proposed ordinance making it illegal to camp or sleep in public places was already in place and that he had to go to the courtyard or one of the nearby nonprofit-run shelters overnight.

”We are not allowed to stay on the streets anymore with the new law,” he said. “It’s actually illegal for us unless the resource centers are full.”

William Prince ended up homeless after a house fire and a subsequent dispute with a landlord over rent. He has lost everything. He said he wants to get a place to live, but the idea of getting a place to stay is out of reach, given the cost of housing in the Las Vegas Valley.

“This is why homelessness is so big in Las Vegas, because of the housing situation,” he said.

Prince said the lowest-cost housing in the valley is of very poor quality. He said housing rights for renters, in his opinion, are not enforced, and the price of housing overall is the primary cause of homelessness.