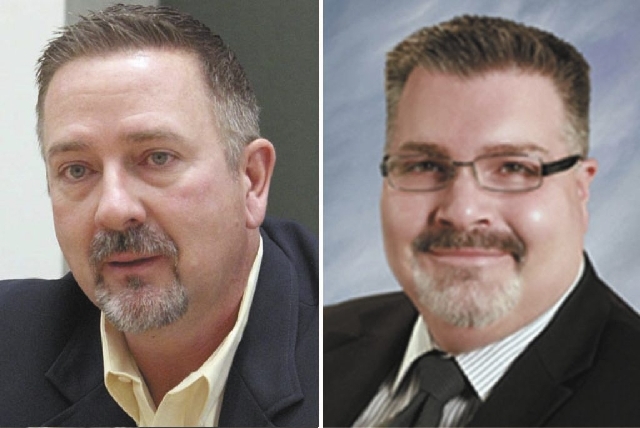 A major shake-up is underway at North Las Vegas City Hall, but newly elected Mayor John Lee insists it is a friendly one.

City Attorney Jeff Barr and City Manager Tim Hacker handed in their resignation letters within hours of each other Wednesday. Each leaves the city after about two years on the job.

Lee said both departures were amicable and, in Barr’s case, long in the works.

“He had actually had other job opportunities through the election. (Former Mayor) Shari Buck had asked him to stay,” Lee said Wednesday night. “After discussing it with him today, we decided it was the right time to make a change.”

The first-term mayor went on to say Barr “may already have another position” lined up elsewhere.

The city announced Hacker’s resignation Wednesday afternoon with a statement that didn’t mention the city attorney.

Hacker declined through a city spokeswoman to comment on his departure.

Less than a month ago, he vehemently denied rumors of his impending exit after July’s swearing-in of the union-backed Lee.

“City Manager Hacker has played a critical role in a very difficult chapter in our city’s history, and we thank him for his service as we turn the page to a new chapter in our community’s future,” Lee said in city’s statement. “Mr. Hacker’s leadership has been crucial to stabilizing and turning our town around by putting us in a positive direction toward a promising future.”

A member of the mayor’s staff said Hacker was in line to receive a severance package worth about six months of pay under his contract with the city, but it was not clear why he would be paid to step down.

Hacker was appointed by Buck in September 2011 and witnessed eight-digit budget deficits in each of his two years on the job.

He helped push for deep cuts to services in North Las Vegas — including brownouts implemented at city libraries, recreation centers and fire stations — that city leaders have credited with helping the recession-racked municipality out of last year’s $33 million budget shortfall.

“I am thankful for the opportunity I have had to serve my community and proud of how far we have come along during my time as city manager,” Hacker said in the statement from the city. “The city is headed in the right direction, and I am excited for its future; however, after considering the regional and state variables outside of my control I have concluded that it is time for someone else to take the reins.”

Barr had been with the city attorney’s office since 2006. He accepted the city’s top legal job in December 2011, months after Hacker first arrived at City Hall.

Hacker’s replacement will be picked from a nationwide pool of candidates, but not until Lee and the rest of the City Council “engage with the community to determine the appropriate framework” for the search, the statement from the city said.

North Las Vegas Fire Chief Jeff Buchanan has been tapped to serve as interim city manager in the meantime.