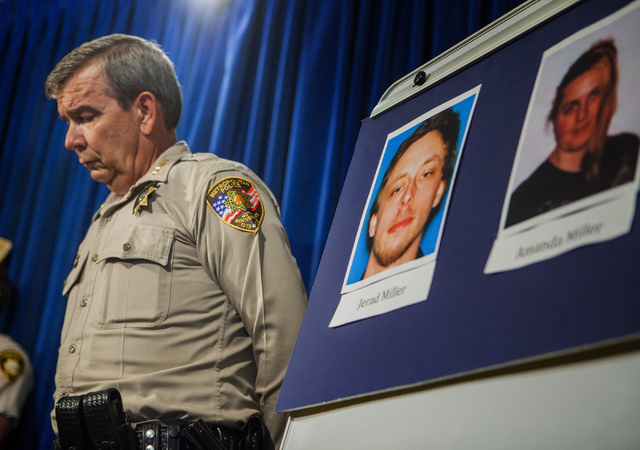 Clark County Sheriff Doug Gillespie during a press conference at Metro Police Department on Monday, June , 2014. To the right are photos of the shooting suspects, Jerad and Amanda Miller. Officers Alyn Beck, 41, and Igor Soldo, 31, were eating at CiCi's Pizza at Nellis Boulevard and Stewart Avenue about 11:20 a.m. Sunday when the two suspects entered the rear of the restaurant and gunned down the officers. The two suspects then went to a nearby Wal-Mart and killed one person. Police said Tuesday that a Las Vegas police officer — not Amanda Miller — fired the shot that ended the life of Jerad Miller, according to an official with knowledge of the case. (Jeff Scheid/Las Vegas Review-Journal) 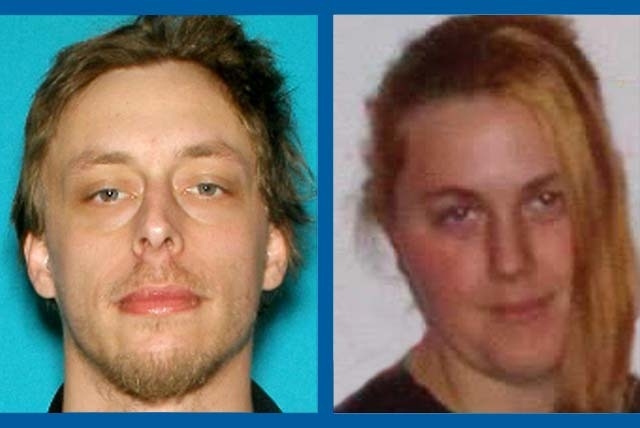 These photos of Jerad Miller and Amanda Miller were provided by the Las Vegas Metropolitan Police Department. The couple shot and killed two police officers on Sunday at a pizza restaurant, and then crossed Nellis Boulevard to a Wal-Mart, where they killed a bystander. Police said Tuesday that a Las Vegas police officer — not Amanda Miller — fired the shot that ended the life of Jerad Miller, according to an official with knowledge of the case. (Courtesy, Las Vegas Metropolitan Police Department) 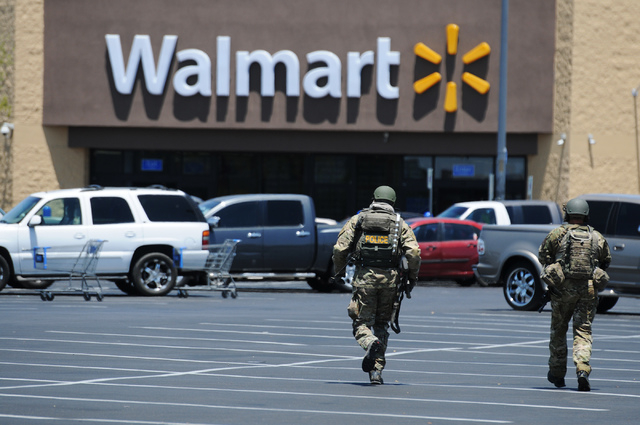 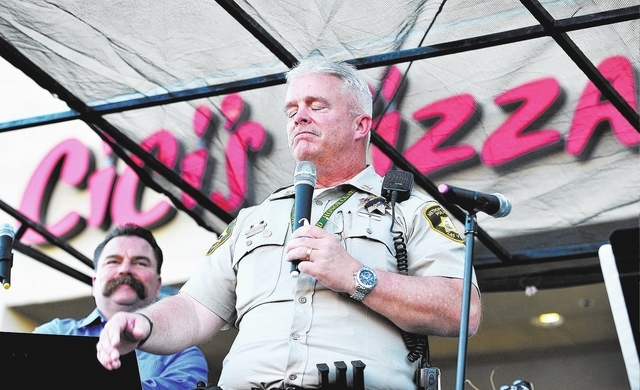 Jerad Miller didn’t die on his own terms after all, the Review-Journal has learned.

It was a Las Vegas police officer — not Amanda Miller, his wife — who fired the shot that ended the life of the 31-year-old cop killer, an official with knowledge of the case said Tuesday.

Metro police initially thought Amanda Miller, 22, killed her husband in the Wal-Mart. That was based on security video footage that showed her pointing the gun at him, the official said.

Clark County Coroner Mike Murphy said he could not confirm the report, citing the ongoing investigation.

Police aren’t sure which officer’s shot actually struck Jerad Miller during the shootout Sunday just after the couple executed two officers in a CiCi’s Pizza in the east valley.

That could be determined as the investigation continues, the official said.

Sheriff Doug Gillespie and Assistant Sheriff Kevin McMahill were at a multi-agency police debriefing Tuesday and could not respond to requests for comment.

Police have clarified several preliminary details reported after the shooting happened Sunday about 11:22 a.m. near Nellis Boulevard and Stewart Avenue.

McMahill said at a news conference Monday that Jerad Miller and his wife walked into the pizza parlor and targeted officers Alyn Beck, 41, and Igor Soldo, 31, who were eating lunch.

Jerad Miller shot Soldo once in the back of the head with a handgun, McMahill said. Beck tried to “engage” the couple but was shot in the throat before he could fire a shot. The Millers shot Beck several more times as the officer slumped to the floor.

Gillespie initially said Sunday that he thought one officer had returned fire.

The couple then covered Beck with a Gadsden Flag, a yellow banner with a coiled snake above the words, “Don’t Tread on Me.” They then put a note on Soldo’s body with a swastika pin that said this was “the beginning of a revolution,” McMahill said.

The couple took the officers’ handguns and left for Wal-Mart, where Jerad Miller fired a single shot and yelled about starting a revolution.

Joseph Robert Wilcox, 31, was in the store with a friend and saw Jerad Miller fire the gun. Wilcox was carrying a concealed weapon and told a friend he was going to do something, McMahill said.

As he moved to confront Jerad Miller, Wilcox passed Amanda Miller, not realizing the two were together. She slipped behind Wilcox and shot him at close range. His efforts were “heroic,” McMahill said.

More Metro officers arrived minutes later and blocked the back door with a patrol car. When Jerad Miller shot the door from the inside to open it, a five-officer team entered and had a shootout with the couple.

Both Millers were apparently struck by police gunfire, but McMahill said Monday that only Amanda Miller was hit.

The couple then laid down in the middle of the store’s automotive section, covered in oil and antifreeze. Although the security footage showed Amanda Miller point her gun at her husband, she apparently never fired at him.

Instead, she shot herself in the head. She died at a hospital; her husband died on the Wal-Mart floor.

The new information raises more questions about the intentions of the couple, who had greater delusions of death and mayhem on their minds.

Neighbors told police the couple left their apartment at 4:30 a.m. Sunday and said would murder cops. It seems that few people took their threats seriously; both had rambled about right-wing extremist conspiracy theories in online videos and on social media sites for years.

It’s not clear why they picked the officers at CiCi’s.

Police believe the Millers acted alone, although the agency is being cautious. For the time being, there were will be 300 to 350 Metro officers on patrol instead of the usual 150.

Jerad Miller had a criminal history in Washington state and Indiana dating to at least 2000, with arrests and charges ranging from misdemeanor battery to felony drug trafficking. He met Amanda in Indiana; they married in 2012.

Miller called a help line of the Indiana BMV after he was stopped by police in Nevada because he was driving with a suspended Indiana license, BMV spokeswoman Danielle Dean told the Review-Journal.

Dean said Jerad Miller threatened to shoot people if he was arrested. His threat was forwarded to Nevada’s Department of Public Safety and eventually landed with the Southern Nevada Counterterrorism Center, the “fusion center” at Metro.

It’s unclear which agency interviewed Miller or what the agency did with the information.

Jerad Miller wrote often about the country’s “fascist government” and was an avid supporter of Bunkerville rancher Cliven Bundy. The couple hoped to join the militia group protesting Bureau of Land Management agents removing Bundy’s livestock from federal land but were kicked off the ranch after the militia learned Jerad Miller was a felon carrying a gun.

His family posted a note on the door of their Lafayette, Ind., home on Tuesday expressing shock and sadness, according to a photo from the Lafayette Journal & Courier.

“We wish to express our greatest sympathies, thoughts and prayers to the families who have lost their loved ones in this horrible act of violence,” the note said.