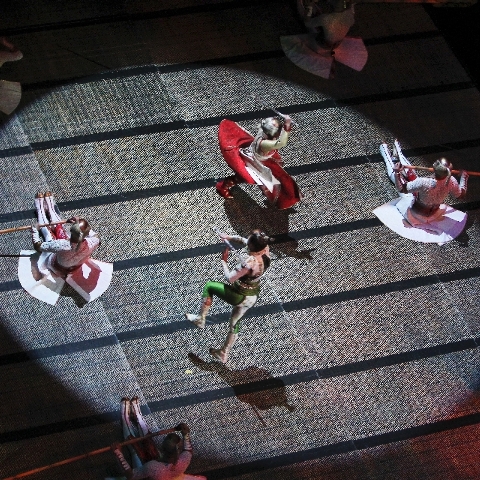 Performers in Cirque du Soleil's KA act out a battle scene at the MGM Grand in Las Vegas on Dec. 29, 2011.

OSHA said it will not be releasing any information regarding 31-year-old Sarah Guyard-Guillot’s deadly fall until it completes the investigation into the cause and whether any OSHA violations occurred.

Cirque du Soleil spokeswoman Renee-Claude Menard said Guyard-Guillot did not slip out of her harness but couldn’t give additional information about the incident.

OSHA did not shut down the “Ka” show after Saturday’s performance, but MGM Resorts International canceled the show indefinitely. Other Cirque du Soleil shows are expected to continue as scheduled.

During the climax of Saturday’s performance, audience members said they saw Guyard-Guillot fall after being suspended nearly 120 feet.

The music was cut off. Audience members sat stunned.

Minutes later, an announcement informed them that refunds or vouchers to future shows would be available.

Guyard-Guillot was taken to University Medical Center and pronounced dead at 11:43 p.m. Saturday.

Last Thursday, a male performer fell after swinging from a hanging cloth during a preview show of Cirque du Soleil’s “Michael Jackson One,” which debuted the same night of Guyard-Guillot’s death. A Cirque du Soleil public relations official said the performer is recovering from a concussion.

Guyard-Guillot, the mother of an 8-year-old daughter and 5-year-old son, was also a coach for Cirquefit, a Las Vegas exercise and circus skills youth program. The Cirquefit classes — also canceled until further notice, according to its website — are held at two Las Vegas facilities, including NV Tae Kwon Do, where Guyard-Guillot’s two children take martial arts.

NV Tae Kwon Do owner Marc Gitelman, who knew Guyard-Guillot for two years, said he was worked up over the tragedy, and parents at his gym who knew her and her children were shocked.

“She was an amazing person,” Gitelman said. “Both as a professional athlete and performer, she was just one of those people who gave it her all. She had a smile on everything she did and was so passionate about her kids.”

He added, “It just kind of blows me away.”

A memorial website has been set up at forsasoun.com for people to share their memories of Guyard-Guillot.

One commenter wrote, “No longer constrained by harnesses, cables, or even gravity … for you now have your wings. It would be impossible to quantify the number of fond memories delivered by your many years of service and performance. We thank you, Sarah.”