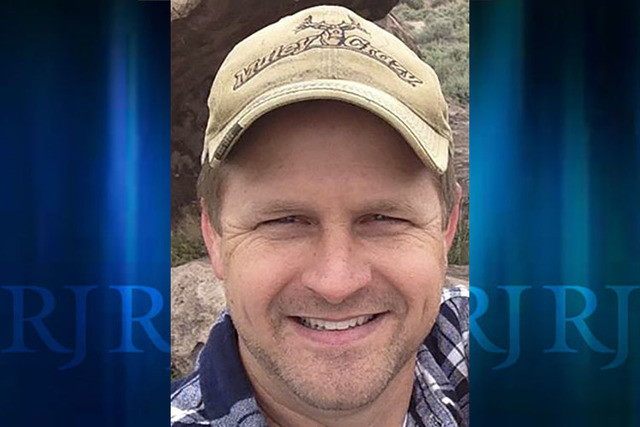 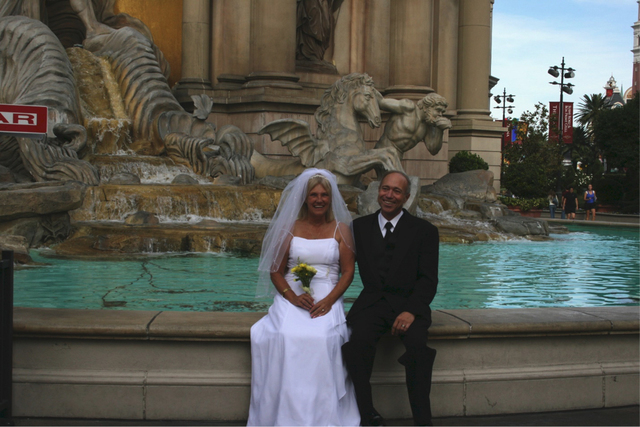 Newlyweds Sue Ellen Hogan and Glenn Franklin Jones pose in front of the Forum Shops at Caesars on Nov. 22, 2008. The two were married until they divorced in 2012. By then Hogan had already moved back to Walsenburg, Colorado, where they had met working at a veterans nursing home. (Courtesy of Sue Ellen Hogan) 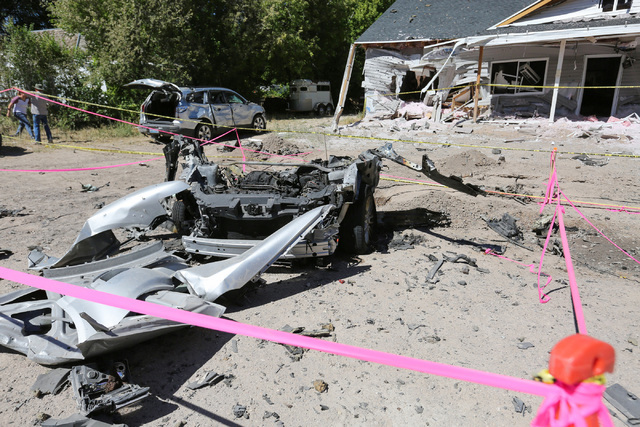 Damage from a July 13 bombing that killed one person on 5th street in Panaca, Nev., tore a car in half and left a house uninhabitable, is seen on Friday, July 15, 2016. (Brett Le Blanc/Las Vegas Review-Journal Follow @bleblancphoto) 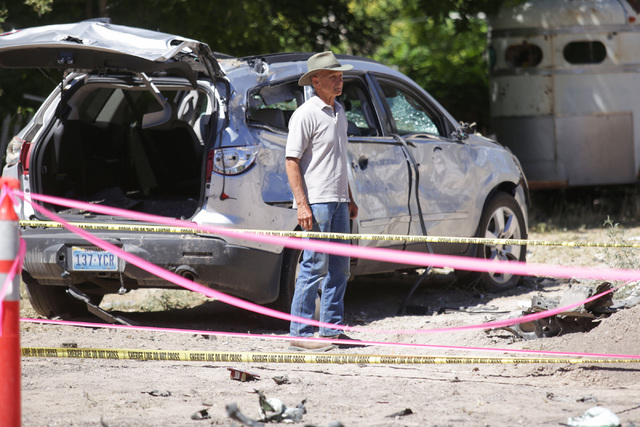 A man surveys the damage from the July 13 bombing that killed one person, tore a car in half and left a home uninhabitable in Panaca, Nev., on Friday, July 15, 2016. (Brett Le Blanc/Las Vegas Review-Journal Follow @bleblancphoto) 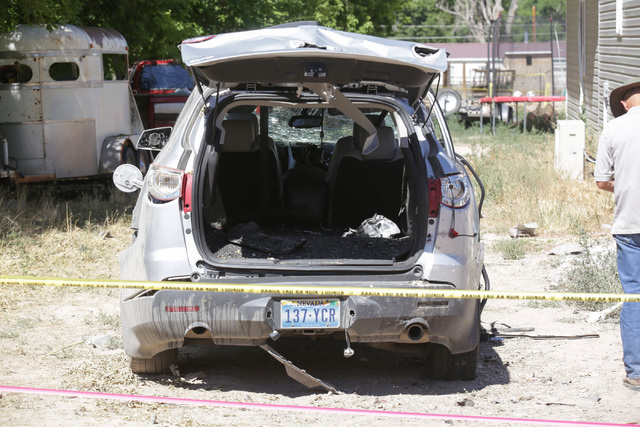 Damage to a car from the July 13 bombing that killed one person in Panaca, Nev., is seen on Friday, July 15, 2016. (Brett Le Blanc/Las Vegas Review-Journal Follow @bleblancphoto) 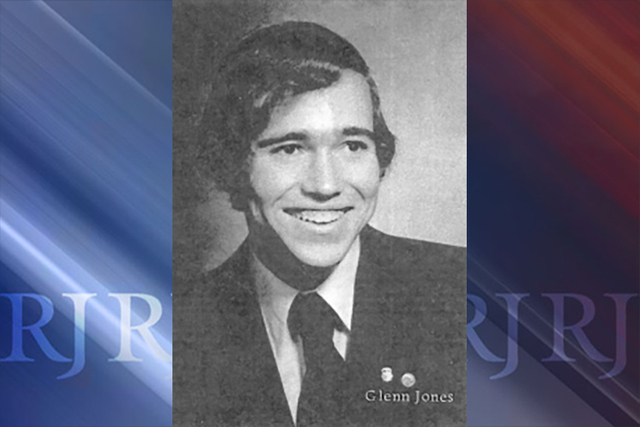 A photo in the 1975 yearbook shows Glenn Jones in his senior year at Fowler High School in Fowler, Colorado, where he was an active member of the speech and debate club. (Fowler Historical Museum) 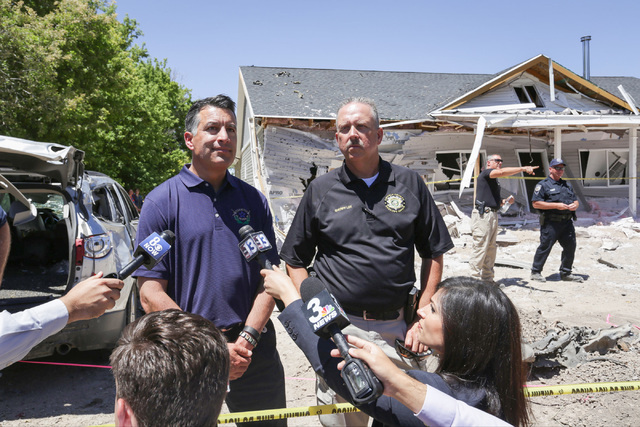 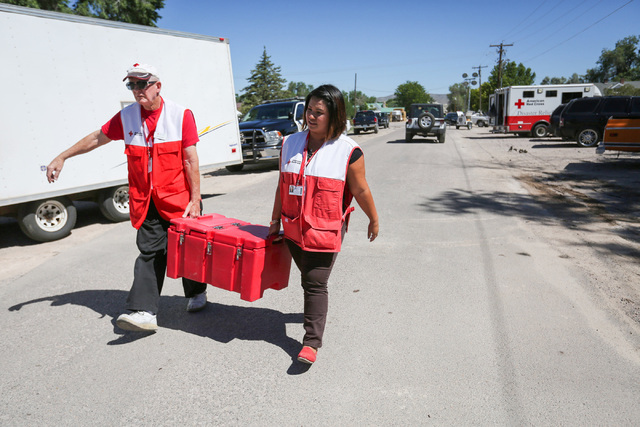 A man he thought he knew set off bombs at his house and almost killed his wife and three daughters, and Joshua Cluff has no idea why.

In an angry telephone interview Friday, the man whose home was targeted in the July 13 bomb attack in Panaca said Glenn Franklin Jones never made a threat or uttered a harsh word to him in the years they knew each other and worked together at the hospital in nearby Caliente.

“I don’t have a clue what Glenn Jones was up to. I have no idea,” Cluff said. “Do you know why crazy people do crazy things before they do them?”

Cluff’s first public statements about the attack came in response to new revelations about what else Jones might have been planning.

According to court records in Arizona, investigators recovered notes the 59-year-old left behind in Kingman, Arizona, suggesting he was planning a “terror attack” against a government building before he attacked the Cluff family instead.

Cluff said his wife and three daughters were home when Jones arrived in a rental car.

They escaped from the house moments before Jones triggered a pair of bombs and shot himself in the head. Cluff, who was at work at the time of the attack, said his wife was half a block away when their house exploded, showering debris over a mile radius.

The following day, authorities in Kingman evacuated the Zuni Village RV park, where Jones had lived since February, as bomb squad personnel worked to safely remove explosives located inside the man’s motor home.

More than a dozen improvised explosive devices in various configurations and stages of completion were found in the RV along with “various hand tools, power tools and materials used in the manufacture of IEDs,” according to a search warrant document obtained Friday from the Mohave County courthouse in Kingman.

The document also details journals and notebooks, recovered from Jones’ RV and the car he left parked at a Kingman rental car lot, that apparently prompted the FBI to question Joshua and Tiffany Cluff and search their property in Panaca on July 21.

According to the search warrant document, Jones’ notes included bomb diagrams and “indicated that at least one explosive device was to be used in a planned terror attack against an unidentified Bureau of Land Management facility on July 4, 2016.”

“Glenn Jones indicated in his journals that a subject named ‘Josh’ solicited and financed the construction of the explosive device to be used in the terror attack,” the document said.

Thanks to that note, Cluff said he spent about 12 hours last week with FBI agents who interrogated him and his wife separately for several hours each.

He said he also took and passed a polygraph test and let the FBI rifle through all his records and belongings, including his cellphone and a trailer on his property where the family was storing items recovered from the wreckage of their home.

The FBI has declined to discuss details of the investigation from the start.

Asked about the most recent revelations Friday afternoon, Lincoln County Sheriff Kerry Lee said he hadn’t heard anything about another bomb plot involving Jones, but he also hadn’t been briefed about the case by the FBI since early in the investigation.

Cluff, 36, used to work as nursing supervisor at Grover C. Dils Medical Center in Caliente, and he said he hired Jones in 2012 to work as a nurse at Lincoln County’s only hospital.

NO INTEREST IN TALKING

Cluff said he didn’t care to say anything else about Jones or their relationship. In fact, he said, he had no interest in talking to the media at all, but he felt he had no choice when the Review-Journal contacted him about Jones’ notebooks.

Since their house was blown up and their world shattered on July 13, Cluff said he feels like his family has been victimized twice more — first by reporters hounding them for answers, then by FBI agents who he said apologized for questioning him but still have some of his financial records, legal documents and other personal items.

“My family is freaking broken now,” Cluff said. “You have no damn clue what we’re going through.”