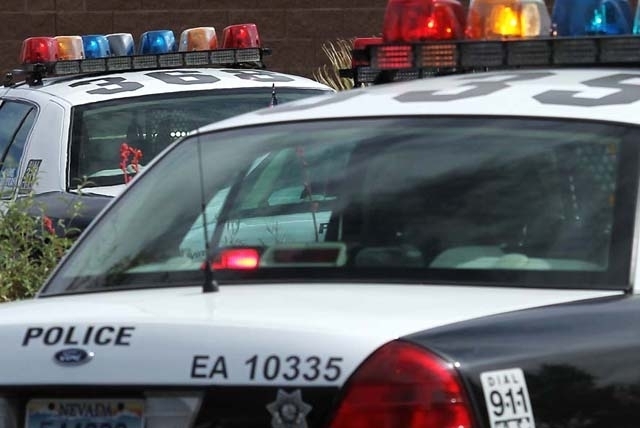 Four men were arrested last month in connection with a string of armed robberies at cellphone stores around the valley.

Like a scene from the movie “Point Break,” the suspects in the case wore masks of U.S. presidents John F. Kennedy and Barack Obama, according to Las Vegas police records.

Fred Oaxaca, 19, Marcus Hammon, 21, Martin Garcia, 18, and Luis Cuevas, 31, were arrested in connection with the crime spree. All of the men are facing different counts of the same charges — robbery with a deadly weapon, kidnapping and conspiracy to commit robbery.

It all started on Feb. 12, when two masked men entered the T-Mobile store at 1014 E. Charleston Blvd. right before closing. The police report calls them “JFK” and “Obama.”

The men force two clerks into the backroom, where they are are forced lie face-down, and Obama zip-ties their hands behind their backs.

Then the men begin to fill a laundry basket they had brought with them and some cardboard boxes they found around the store with money and merchandise.

Four days later, JFK and his crew struck again, this time at the AT&T store at 325 N. Nellis Blvd.

Again, the men entered the store around closing time. For 20 minutes, the bandits kept the victims in the backroom while they filled cardboard boxes with “high value smartphones, tablets and other electronic items.” JFK instructs the men to ignore lower-value phones, according to the report.

They stole $7,000 in cash and electronics valued at $113,421 — and threatened to shoot a cleaning lady who stumbled upon the scene.

The theives hit another store on Feb. 18., but it wasn’t until their fourth robbery a week later that they made the mistake that led to their capture.

They brought two vehicles to rob the Verizon store at 675 E. Dorrell Lane: a white cargo van and a Honda sedan.

After emptying the safe and filling large gray tote bags with cash and electronics, the men used a dolly to fill the van. One of the items the men took was an iPhone tracking device, and North Las Vegas police officers used it to locate both vehicles in the area of Lamb Boulevard and Craig Road.

Inside the Honda, police found the JFK and Obama masks and guns.

Oaxaca initially denied involvement in any of the robberies. But he later told police that he had been selling the electronics on Craigslist for $100 each. He declined to help police locate the $250,000 in electronics that had been taken in the robberies.

Garcia told police he needed money for his pregnant girlfriend, according to the police report. He admitted to being the gunman in the T-Mobile and AT&T robberies, the latter of which he said he was paid $1,000 for. He told police Oaxaca recruited him and sold the phones on Craigslist.

Cuevas told police that he had seen Oaxaca with a lot of money, so he signed on to be the getaway driver. He told police that Oaxaca always wore the JFK mask, according to the police report.

David Ferrara contributed to this report. Contact Wesley Juhl at wjuhl@reviewjournal.com and 702-383-0391. Find him on Twitter: @WesJuhl