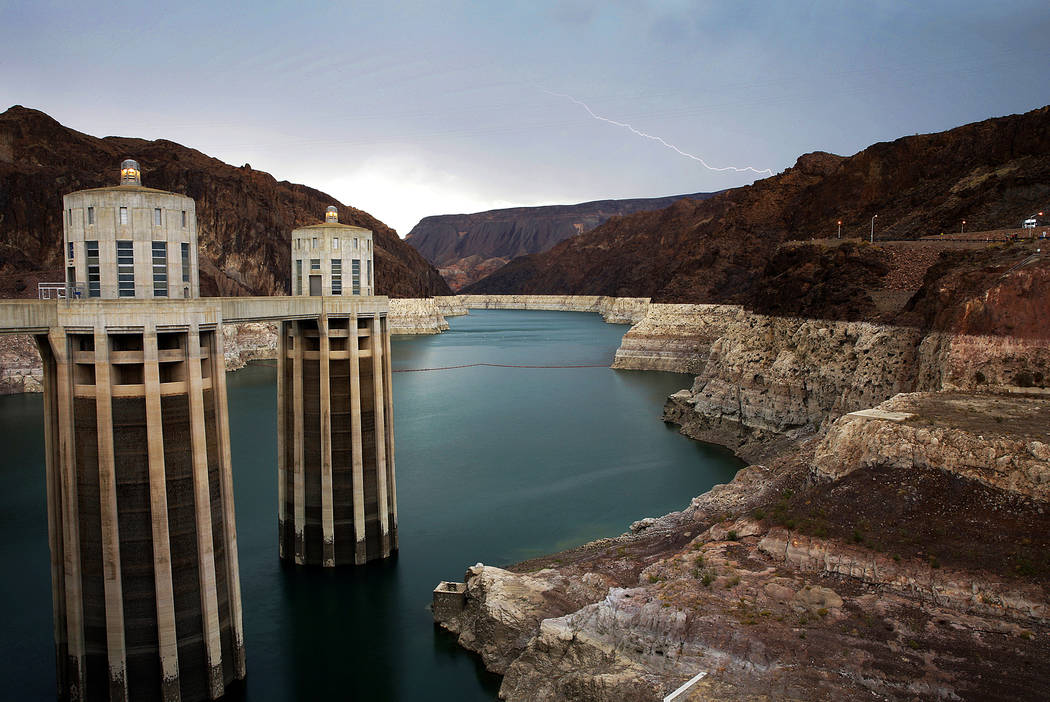 FILE - In this July 28, 2014, file photo, lightning strikes over Lake Mead near Hoover Dam that impounds Colorado River water at the Lake Mead National Recreation Area in Arizona. President Donald Trump on Tuesday, April 16, 2019, signed a plan to cut back on the use of water from the Colorado River, which serves 40 million people in the U.S. West. (AP Photo/John Locher, File)

PHOENIX — President Donald Trump on Tuesday signed a plan to cut back on the use of water from the Colorado River, which serves 40 million people in the U.S. West.

The Colorado River drought contingency plan aims to keep two key reservoirs, Lakes Powell and Mead, from falling so low they cannot deliver water or produce hydropower. It was negotiated among the seven states that draw water from the river. Mexico also agreed to store water in Lake Mead on the Arizona-Nevada border if the U.S. legislation was approved by April 22.

The legislation was supported by all 14 senators from the Colorado River basin states, though Trump announced his action in a tweet that singled out Arizona Republican Sen. Martha McSally, who is in a tough fight for re-election next year.

“Thanks to SenMcSallyAZ for getting it done,” Trump wrote. “Big deal for Arizona!”

Arizona has the lowest-priority access to Colorado River water and will be hit hardest. The state negotiated a separate agreement to provide other water sources and new groundwater infrastructure for farmers in Pinal County between Phoenix and Tucson.

Arizona and Nevada agreed to keep water in Lake Mead when it falls to certain levels. The cuts eventually would loop in California if the reservoir drops far enough.

The Metropolitan Water District, which supplies drinking water to millions in Southern California, agreed to shoulder California’s share of cutbacks if they’re needed. That pledge cut out the Imperial Irrigation District, which has the largest entitlement to Colorado River water and had said it would only participate in the arrangement if it secured money to resolve environmental problems at the shrinking Salton Sea.

State water managers and federal officials have cited a prolonged drought, climate change and increasing demand for the river’s flows as reasons to cut back on water usage.

The drought plan calls for cutbacks through 2026. The states are scheduled to begin negotiations soon over even more severe cuts to deal with a long-term shortage in water on the Colorado River.