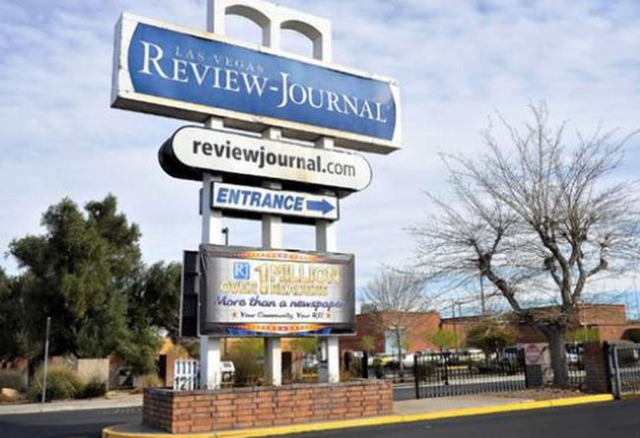 One of the country’s largest and oldest journalism organizations has joined a growing chorus of reporters, readers and media watchdogs calling on the Las Vegas Review-Journal’s new owners to reveal themselves.

The Society of Professional Journalists — a 7,500-member advocacy group that promotes First Amendment and media ethics causes — said in a statement Tuesday there was “no excuse” for the newspaper’s owners to hide their identities.

The statement came less than a week after the Review-Journal was purchased by News + Media Capital Group LLC — a newly formed, Delaware-domiciled company backed by “undisclosed financial backers with expertise in the media industry.”

News + Media manager Michael Schroeder has declined to disclose the company’s investors, as has Review-Journal Publisher Jason Taylor. Michael Reed, CEO of GateHouse Media, the newspaper’s former owners, did not respond to questions about the sale in a Monday email.

National Public Radio media reporter David Folkenflik on Tuesday tweeted a quote, attributed to Reed, likening News + Media’s anonymous investors to those behind other major media companies and adding “the journalists in those companies don’t seem to be undermined.”

News + Media paid $140 million for the newspaper and its sister publications, around $38 million more than New Media Investment Group paid in March for all of Stephens Media LLC, a national chain of eight daily newspapers that included the Review-Journal. As a Delaware limited liability corporation, News + Media is not required to list its owners in any public document.

The inflated purchase price has fueled speculation and denials surrounding the newspaper’s new owners, much of which has centered around Las Vegas billionaire Sheldon Adelson, chairman and CEO of Las Vegas Sands Corp.

The New York Times, Los Angeles Times, CNN and a half-dozen online media outlets have speculated about Adelson’s involvement. Adelson, a mega-donor to GOP candidates and causes, has declined comment to all.

U.S. Senate Minority Leader Harry Reid in Washington Tuesday told reporters he suspects — but has no evidence — that Adelson is the secretive buyer.

So far, only billionaire industrialists Charles and David Koch and Las Vegas Sun owner Brian Greenspun have ruled themselves out of a group of 10 to 12 investors thought to be possibly behind the purchase.

On Monday, GOP presidential candidate Jeb Bush waded into the mystery, taking to Twitter to ask who owned the newspaper after the close of an hourlong meeting with the R-J’s editorial board.

One minute later, more than a dozen R-J reporters simultaneously tweeted a link to the SPJ’s widely-adopted code of ethics, part of which calls on journalists to be accountable and transparent, and to “abide by the same high standards they expect of others.”

Tuesday saw the Indianapolis-based journalism group pick up where those staffers left off.

“The Society’s Code of Ethics stresses that those engaged in journalism need to be accountable and transparent,” SPJ Ethics Committee Chairman Andrew Seaman said in a statement. “We now expect that of those behind News + Media Capital Group LLC.”

Media watchdogs contacted by the Review-Journal have expressed similar concern. Not disclosing ownership, they said, raises ethical questions about how reporters can possibly disclose conflicts of interest with the company that signs their paychecks.

GateHouse Media bought the Review-Journal from longtime owners Stephens Media LLC along with most other Stephens media assets in a $102.5 million deal announced Feb. 19. Sources close to that sale confirm that Adelson, working through intermediaries, was one of several bidders, offering to buy only the company’s holdings in Nevada.

Schroeder, the News + Media manager, has said his company had been looking to buy the Review-Journal “for six to eight months” before the deal was announced last week. Taylor, who became GateHouse’s publisher in Las Vegas in July, has said he learned of the News + Media interest in late summer or early fall, about the time that the new company was incorporated in Delaware.

Media reports in 2009, when Schroeder bought the Central Connecticut newspapers, show an odd parallel to his current involvement with News + Media.

According to a report in the Waterbury, Conn., Republican American, Schroeder said he learned those newspapers were on the market through an “investor friend,” and that he “repeatedly declined to name the investor, but described him as a ‘friend’ who wants to remain a silent partner. Details of the deal, including the sale price, were not disclosed.”

Attempts to reach Schroeder for comment at his suite at Las Vegas Sands’ Venetian resort were unsuccessful Friday, but public records show other clues leading in Adelson’s direction.

Schroeder, the only public face of News + Media, has been associated with Russel Pergament. Both were executives at BostonNOW, a defunct free daily newspaper in Adelson’s hometown.

JNS has an exclusive agreement to distribute content from Israel Hayom, an Israeli newspaper owned by Adelson. Both JNS and Israel Hayom have been widely criticized for a perceived tilt in favor of far-right Israeli politicians.