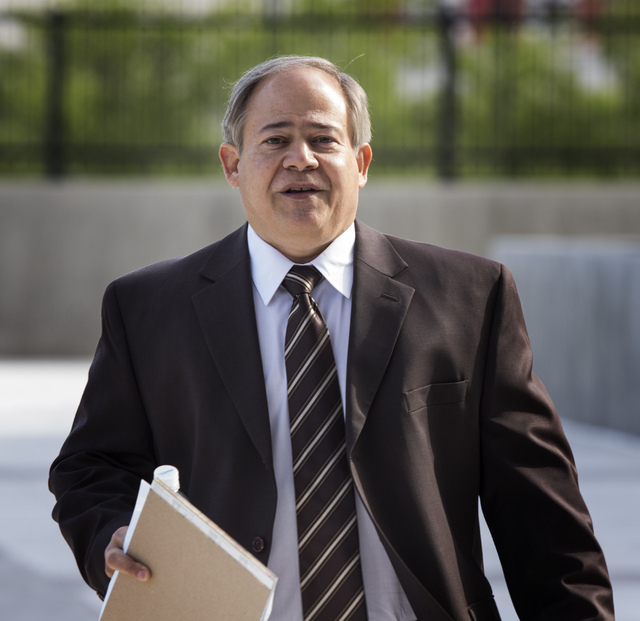 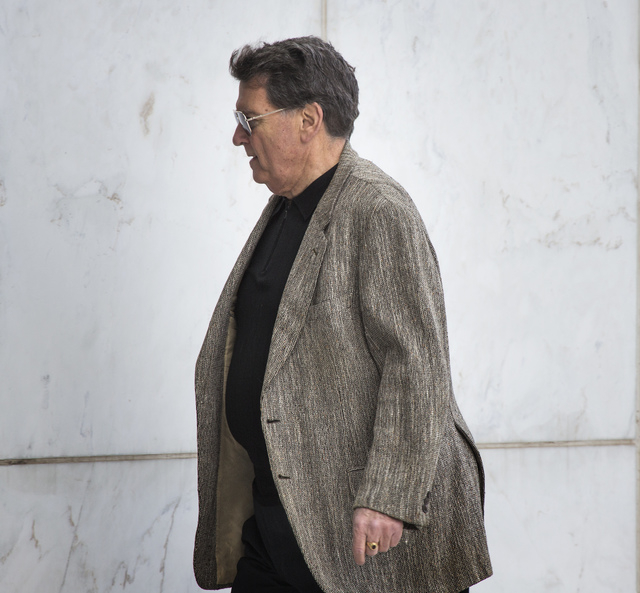 Weston Coolidge, former chairman and president of National Audit Defense Network arrives for opening statements in the tax fraud trial on Wednesday, April 16, 2014. Coolidge along with Alan Rodrigues, former general manager of NADN; and Joseph Prokop, a former marketing director for another company that hired NADN. The three are charged with fraud valued at over $324 million. (Jeff Scheid/Las Vegas Review-Journal)

A federal prosecutor Wednesday laid out the government’s case before a jury in the trial of three men charged in a massive tax fraud scheme that occurred more than a decade ago.

Timothy Stockwell, a trial attorney with the Justice Department’s Tax Division in Washington, likened the national scheme to the old adage, ” If it’s too good to be true, then it probably is.”

The scheme, which Stockwell said occurred between 2001 and 2004, involved the now-defunct Las Vegas company, the National Audit Defense Network. The company is accused of selling an internet package, dubbed “Tax Break 2000,” to help thousands of clients across the country claim improper tax deductions.

The Justice Department once estimated that the Internal Revenue Service lost more than $324 million in taxes to the scheme.

In 2004, the bankrupt NADN shut its doors after the Justice Department filed suit to stop the sales of the program. The company’s co-founder, Robert Bennington, later committed suicide.

The men were indicted by a Las Vegas federal grand jury more than five years ago, and the case has slowly made its way through the court system.

The trial, expected to last up to six weeks, is unfolding in the courtroom of U.S. District Judge Miranda Du.

Rodrigues is a former owner of the Opera House and Silver Nugget casinos in North Las Vegas and Coolidge is a longtime Las Vegas businessman. Prokop, who worked for a California company that sold Tax Break 2000 to NADN, played for several NFL teams, including the New York Jets and Miami Dolphins, between 1987 and 1992.

Stockwell told the jury Wednesday that Tax Break 2000 was sold as a website that allowed customers to claim up to $10,475 in income tax credits and deductions under the Americans with Disabilities Act. Many of the customers, he said, ultimately were audited by the IRS after it questioned the legality of the program.

The defendants carried out the scheme even after being told by its own “dream team” of tax experts that the IRS wouldn’t approve the program, Stockwell said. The scheme also continued after the IRS began investigating the company.

Defense lawyers for Rodrigues and Coolidge said in their opening arguments that their clients disputed claims the program was illegal and didn’t wilfully seek to break the law.

The attorneys blamed the criminal case on one of the prosecution’s key witnesses, Daniel Porter, the California businessman who created Tax Break 2000. Porter pleaded guilty in the scheme in return for a lighter sentence and is to testify for the government during the trial.

Pocker asked the jury to listen to his testimony carefully and remember the benefits he received from the government for cooperating.

Rodrigues ran NADN, which at one point had 400 employees, like any other business and simply had a “good faith disagreement” with the IRS over Tax Break 2000, Pocker said

“It isn’t a crime to be financially successful,” he added.