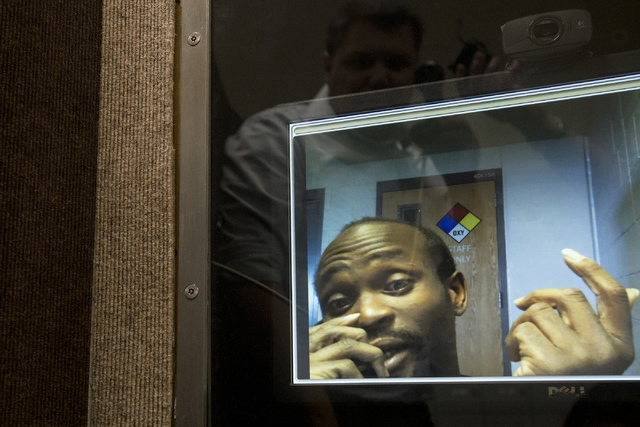 Antwine Hunter is interviewed by a reporter at Clark County Detention Center in Las Vegas on June 7, 2016. Police say Hunter, a paraplegic after being shot in 1995, stole a cell phone and scanner from a UPS driver and fled the scene. (Bridget Bennett/Las Vegas Review-Journal) Follow @bridgetkbennett

His leg braces, jail officials told him, were not allowed inside, and he needed medical clearance for a wheelchair.

He wasn’t sure why an arresting officer had slammed him to the ground May 21 outside Palm Pizza on East Charleston Boulevard or why he had a warrant for his arrest on burglary and larceny charges.

The 29-year-old spent the next two weeks behind bars on a $20,000 bail he could not afford, maneuvering around the jail in a small, uncomfortable black wheelchair before anyone questioned the charges.

Detectives never asked him about the allegations, he said.

“I’m still kind of lost,” he said in an interview at the jail Tuesday, awaiting his release.

Police said he had stolen a cellphone and scanner from a Las Vegas United Parcel Service driver and ran from the scene. The driver picked him out of a headshot photo lineup with six other black men.

But it’s unclear how Hunter became a suspect in the case. An arrest warrant states that he was “identified via investigative means.”

Hunter hasn’t walked without braces on his legs since 1999, when he was 12 years old, shot five times outside his Compton, California, middle school in a drive-by shooting that left two others injured and a fellow sixth-grader dead. Two of those gunshot wounds left him paralyzed from the waist down.

A jail officer pushed Hunter into Courtroom 7B on Tuesday morning. Dark blue jail fatigues draped his thin physique, a chain circled his waist and his wrists were handcuffed. His feet, in orange socks, didn’t reach the floor.

Hunter’s defense attorney, Roy Nelson, said there’s no way he could have committed the crime.

“There’s no indication whatsoever as to why he’s even contained in a photographic lineup,” Nelson told Las Vegas Justice of the Peace Eric Goodman. “There’s nothing to support a finding that he was involved whatsoever.”

Prosecutor Elana Graham said she did not know Hunter was paralyzed until Nelson told her Monday night.

Until then, she had reviewed the charges against Hunter only on paper. She knew the delivery driver had identified Hunter, who had prior felonies in California.

The officer who wrote Hunter’s arrest report did not show up for a court hearing Tuesday, and Metro officials declined to comment on the case.

Hunter told the Las Vegas Review-Journal that he took marijuana for pain he still endures from the gunshot wounds. He now carries a medical marijuana card. The threat was an idle remark he made during a family squabble, he said.

When the UPS driver, Herbert Hutson, walked into court Tuesday and saw the defendant, he told the prosecutor Hunter was not the man who ran into his truck. Graham noticed that Hunter “wasn’t physically capable” of the crime alleged and decided to drop the charges against him.

“That doesn’t mean that he doesn’t live a life of crime,” the prosecutor said. “But in this case it meant that he couldn’t be the person who was alleged to have robbed the UPS driver, because that guy ran into the truck and then fled on foot.”

She called the dismissal “a totally fair resolution.”

But the judge ruled that authorities could pursue charges against Hunter if they found new evidence that linked him to the crime.

The defense attorney said Hunter could pursue litigation against police.

“I’m extremely grateful for the men and women of the Las Vegas Metropolitan Police Department who risk their lives for our county,” Nelson said. “Unfortunately, there were corners cut and no investigation done into my client’s identity or physical status. We thank the DA’s office for everything, including righting a wrong.”

Joking with Hunter before his hearing, private investigator Robert Lawson asked if he had “super legs somewhere.”

“I wish,” Hunter responded with a smile. “If I did, I’d be a point guard for the Lakers or a shortstop for the A’s.”