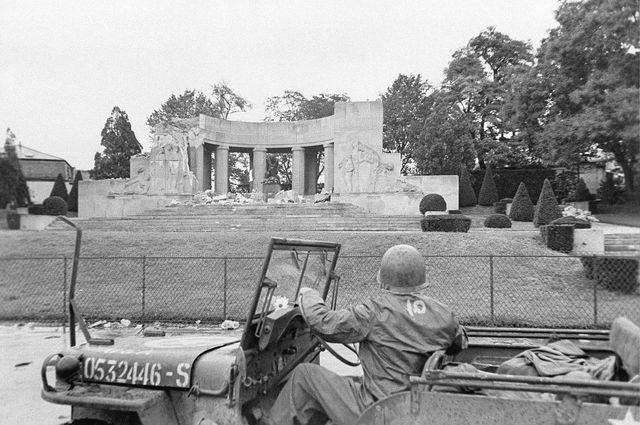 An American soldier pauses in jeep to look at the World War I memorial at Reims, France on Sept. 9, 1944. (AP Photo)

“These crosses stretch in some places as far as the eye can see and give a slight idea of the cost of lives of the last great war. … ‘Epemay’ and ‘Rheims’ which is a very large and lively city about the size of Boston, less the suburbs, whose principal gift to the world is the massive, medieval beautiful cathedral of Rheims. It’s architecture both inside and out being too grandiose &magnificent to describe. The city is also the home of two large champagne factories which is more plentiful than water.”

Navy veteran Ron Deanne of Henderson in June retraced steps that Army Pvt. Ed Jennings took 70 years ago on battlefields and cities where the 5th Infantry Division fought in France and Germany during World War II.

Jennings had moved to Las Vegas from the East Coast with his wife, Fern, in 1984. He was dying from leukemia and was too sick to live his dream to return to France for the 40th anniversary of the Normandy invasion.

Ten years later, Fern Jennings wrote a book about the letters her husband sent to his family. After reading a Review-Journal story about the book, “Your Loving Son, ‘Ed,’ ” Deanne devoted his recent trip to Jennings’ memory and marked the 70th anniversary of the invasion and the battles that followed.

“After seeing it today, it’s hard to imagine this historic city, Reims, was so heavily bombed. Pvt. Edward Jennings and his fellow soldiers passed through the place he called ‘Rheims’ in the fall of 1944 after he had slept in a trench in the Argonne Forest near a cemetery for World War I soldiers,” Deanne wrote.

“That’s not all this place is famous for. Remember later, that it was here (in a brick schoolhouse) on the 7th of May 1945, at 2:41 a.m., that General Alfred Jodl, commander-in-chief of the Wehrmacht, signed the full surrender of Nazi Germany to General Dwight D. Eisenhower.”