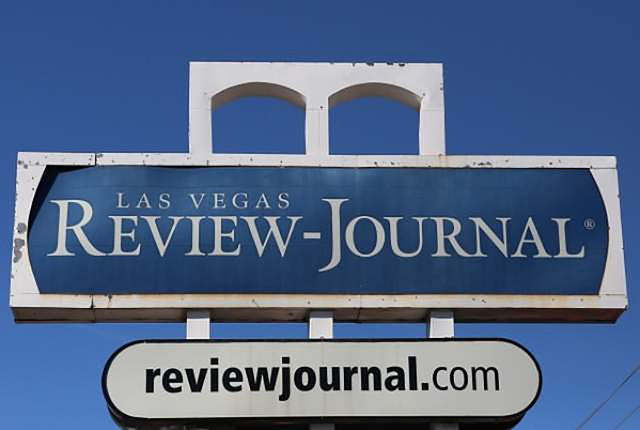 The fearlessness displayed by seven current and former Las Vegas Review-Journal writers and editors who uncovered the newspaper’s sale to the family of casino executive Sheldon Adelson has earned the journalists the 2015 James Foley Medill Medal for Courage in Journalism.

“This award was created to honor courage in journalism — moral, physical, ethical, financial or political,” co-judge Dick Stolley said in a statement Monday. “Because of the violent world we have to cover, journalists displaying physical courage have often been the winners, and justifiably so.”

But last year was different, Stolley noted. “The staff of this newspaper displayed great courage in its coverage of a dramatic change in management in order to keep the public informed of news critical to their community. They risked their livelihood, careers and reputations in insisting on the kind of courageous journalism our medal was invented to celebrate. We are proud of them and of our choice,” he said.

The award — which brings with it a $5,000 shared prize and a medal bearing the likeness of former newspaper editor and publisher Joseph Medill — is presented by the Medill School of Journalism at Northwestern University. The Medill Medal was awarded to former RJ staffers James DeHaven, Eric Hartley, Jennifer Robison, John L. Smith and Howard Stutz, who resigned from the newspaper between December and May, and current editors James G. Wright and Glenn Cook.

The journalists join the ranks of previous recipients of the award — some who faced physical harm in their reporting — including 2013 special recipient James Foley, for whom the award is now named. Foley, a Medill alumnus, was captured in Syria in 2012 while working as a freelance journalist and murdered two years later by militants.

It is the fourth major journalism award for the Review-Journal’s coverage of December’s sale of the newspaper by GateHouse Media to an undisclosed group of local investors. An investigation revealed the Adelsons were behind the purchase, which they subsequently confirmed. Sheldon Adelson is chairman and chief executive officer of Las Vegas Sands Corp., which operates The Venetian, the Palazzo and the Sands Expo & Convention Center.

“Everyone knew immediately that the anonymous purchase of a major daily American newspaper was unprecedented, and that secret ownership of the Review-Journal created an immediate ethical and credibility crisis not just for the newspaper, but for everyone employed by it,” said Cook, the newspaper’s managing editor. “How could reporters disclose potential conflicts of interest if they didn’t know who they worked for? How could readers trust them?”

Receiving the James Foley Medill Medal for Courage in Journalism is humbling recognition, said Cook, who contributed editorials on the newspaper’s sale.

“Unlike the award’s namesake and many previous recipients, Review-Journal writers and editors never worked under life-threatening or remotely dangerous conditions,” he said.

At the time, the writers and editors involved didn’t consider their work to be especially courageous, but they were determined to defend the credibility of the newspaper, Cook said.

“We knew our readers and our community needed to know the identity of the owners of Nevada’s largest newspaper to properly judge for themselves whether our coverage was compromised by conflicts of interest. We knew we needed to know who we worked for. We simply wanted to do the right thing,” he said. “Whatever courage was required to tell that story, at the potential risk of our jobs, pales in comparison to the courage displayed daily by countless war and foreign correspondents. Nonetheless, we are incredibly honored to receive their award and thank the Medill School of Journalism for the honor.”

Coverage of the sale also earned some members of the RJ team this year’s Ancil Payne Award for Ethics in Journalism, given by the University of Oregon; a Sidney Award from the Sidney Hillman Foundation; and second place in the 2016 Best of the West journalism contest for investigative reporting, work a judge called a “gutsy and pugnacious examination.”