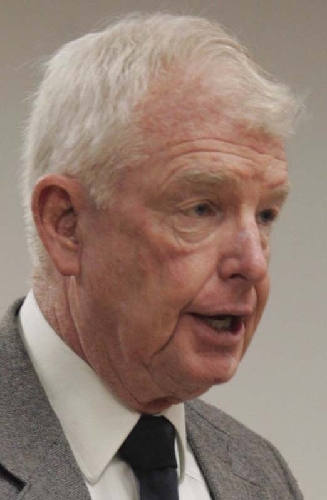 Rex Bell Jr., former Clark County district attorney, Las Vegas justice of the peace and the son of Hollywood royalty, died Saturday after a battle with cancer. He was 76.

"He was a special person," said District Attorney David Roger, who was hired by Bell in 1987. "Rex loved people and in return, everyone loved him.

"I couldn’t identify a single person who was Rex Bell’s enemy. He didn’t have any."

"Rex was one of the old-time Nevadans that acclimated from the cowboy (culture) and the smaller towns into the urban population," Miller said. "But he was always a cowboy at heart. He was a great find for the district attorney’s office."

But it wasn’t until Goodman was elected mayor when he saw Bell in a different light. Goodman said Bell routinely represented citizens of modest means in front of the City Council when they clearly couldn’t afford an attorney.

"The Rex I appreciated was the Rex who appeared before the council basically as a pro bono attorney," Goodman said. "He went to bat for them as if they were paying him a million dollars.

"He really took care of the little guys. His father was a handsome movie star, his mother was a world class beauty, but he never pulled rank based on his genes."

Bell attended Notre Dame from 1953 to 1955 and remained a lifelong fan of the Fighting Irish sports teams.

He transferred to the University of Nevada, Reno, where he graduated in 1957. He earned his law degree in 1963 from the Willamette Law School in Oregon.

While Bell tried to follow in his famous parents’ footsteps — taking roles in two Westerns after college — he found his true calling in the law.

Bell was elected a Las Vegas justice of the peace in 1972. At the end of that time, he sought the Republican nomination for lieutenant governor, a post his father held more than a decade earlier. Bell Sr. died in office July 4, 1962, while campaigning for governor.

Bell Jr. served one term and then entered private practice for two years before returning to the district attorney’s office in 1978.

He never lost a case as a deputy district attorney, a fact his former boss Miller attributed to the fact that opposing attorneys underestimated the tall, thin Bell and his slow Western drawl.

"I think people tend to underestimate people who speak with a country twang," Miller said in a 1986 interview with the Review-Journal. "But Rex has had great success in court."

He was also a tough-on-crime prosecutor who favored longer prison sentences for offenders, saying the cost to build new prisons to house them was less expensive than leaving criminals on the streets.

"He was one of the legends of the last 50 years in Las Vegas," longtime criminal defense attorney Tom Pitaro said. "And he was one of those larger than life individuals. He was a nice, nice man. I can’t really think of anyone who didn’t like him."

In negotiating plea agreements for clients, Pitaro said Bell didn’t let his ego get in the way of trying to carve out a deal that was right for everyone. "He was always a level-headed individual. He would listen to whatever pitch you made and always tried to make the right decision."

"Rex truly appreciated the Western culture," Collins said. "He was a cowboy.

"He was a true Nevadan. He was a very kind and humble man and very proud of his heritage."