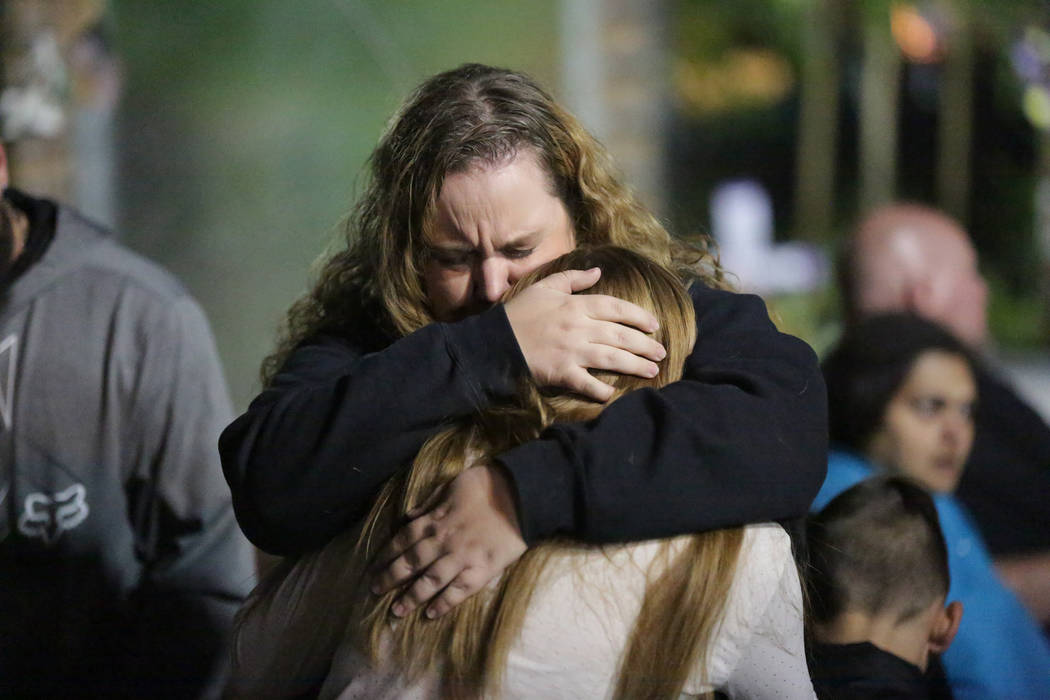 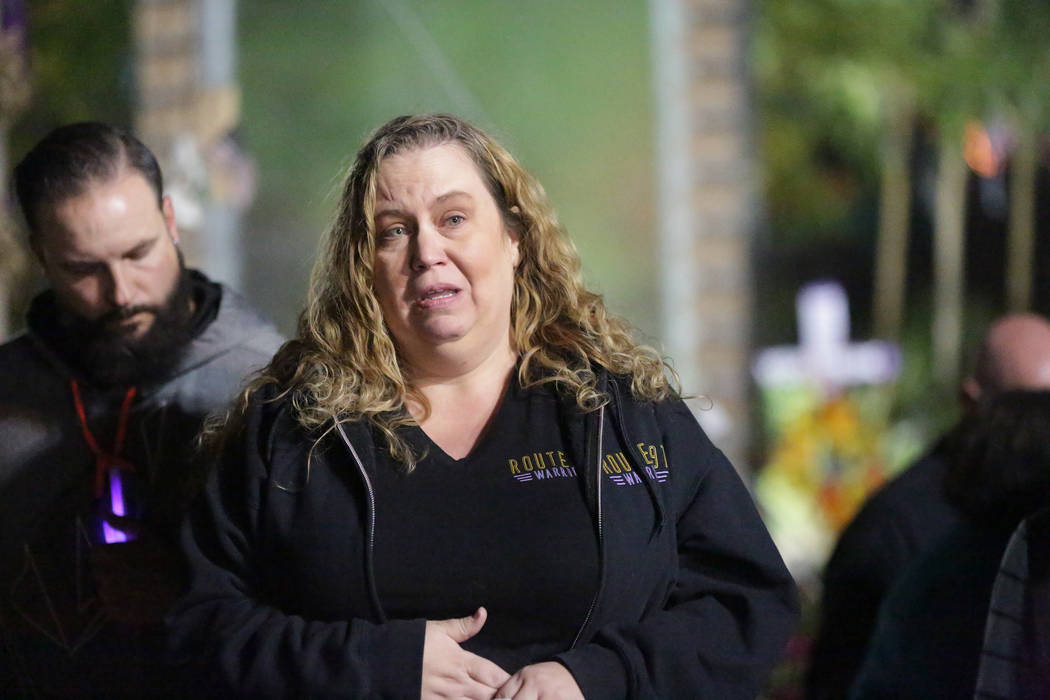 Route 91 survivor Stacie Armentrout addresses a group that included survivors from the Las Vegas mass shooting for a vigil at the Las Vegas Healing Garden on Friday, November 9, 2018, to honor the 12 people killed in the Borderline Bar and Grill shooting in Thousand Oaks, California. Michael Quine/Las Vegas Review-Journal @Vegas88s 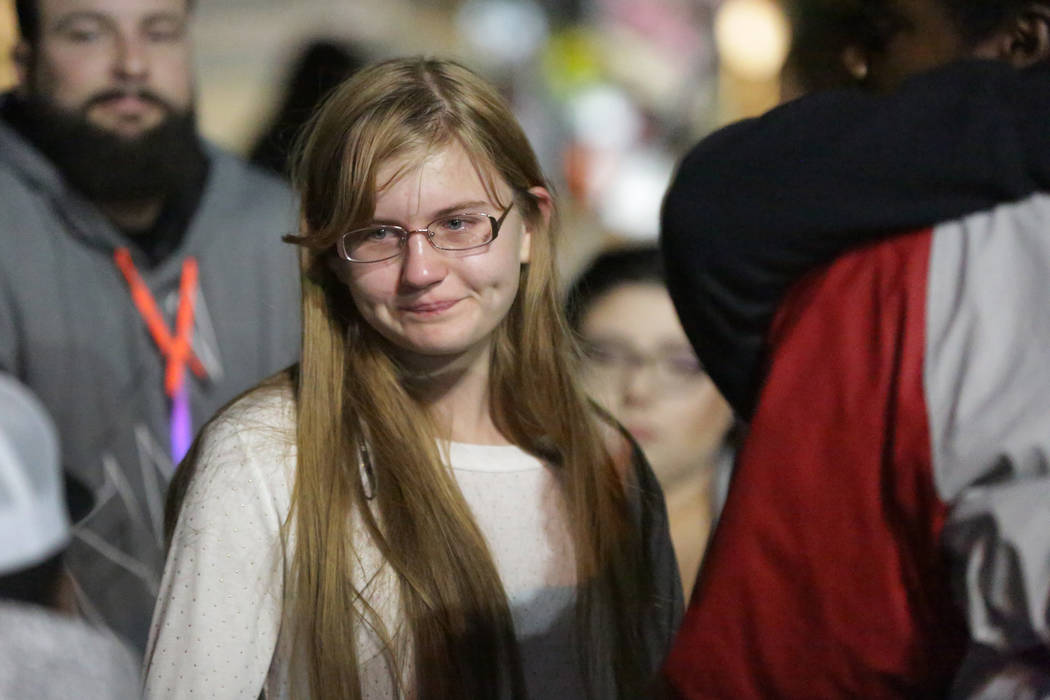 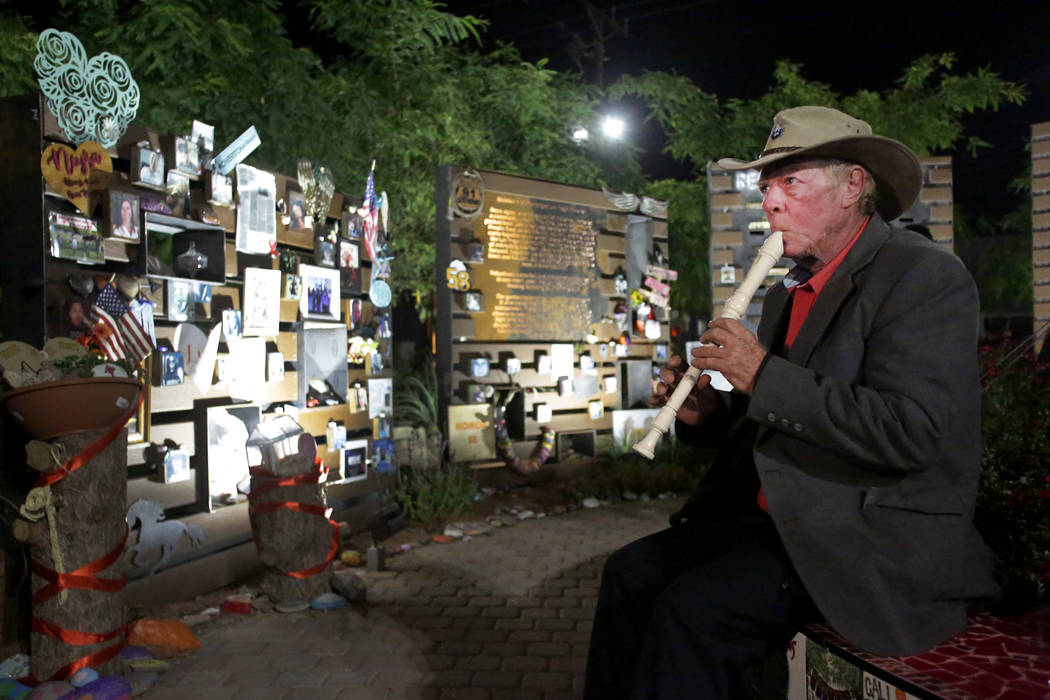 Tod Mainzer of Henderson plays recorder at the Las Vegas Healing Garden on Friday, November 9, 2018, during a vigil to honor the 12 people killed in the Borderline Bar and Grill shooting in Thousand Oaks, California. Michael Quine/Las Vegas Review-Journal @Vegas88s 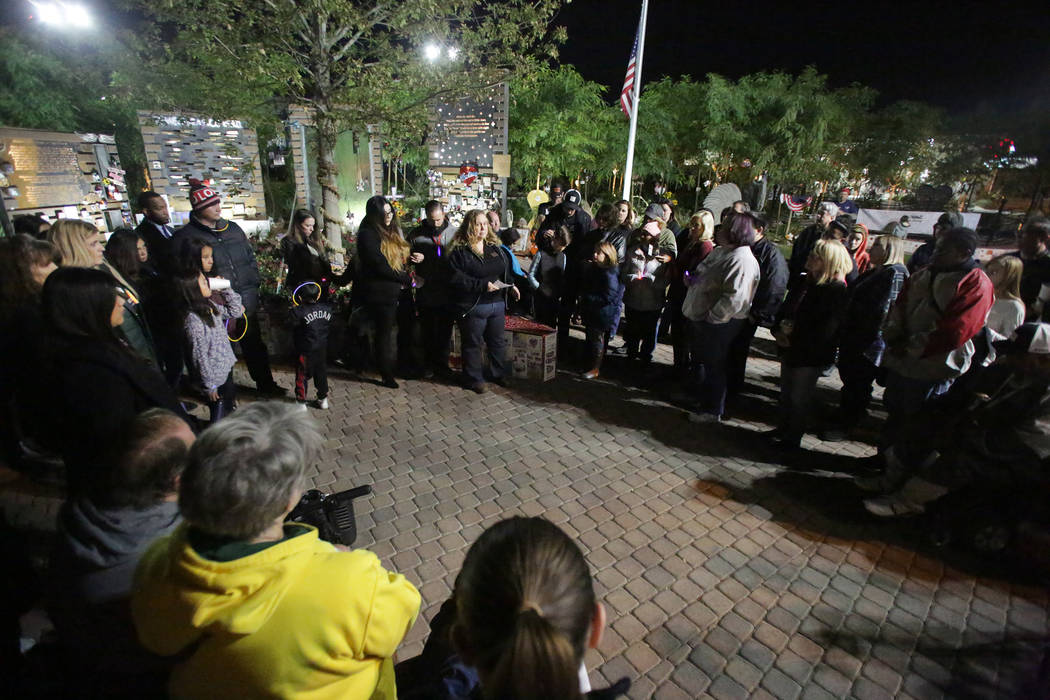 A crowd, that includes survivors from the Las Vegas mass shooting, gathers for a vigil at the Las Vegas Healing Garden on Friday, November 9, 2018, to honor the 12 people killed in the Borderline Bar and Grill shooting in Thousand Oaks, California. Michael Quine/Las Vegas Review-Journal @Vegas88s

Survivors from the Route 91 Harvest festival attack gathered in Las Vegas for a Friday night vigil to honor the 12 victims of another mass shooting, one that hit close to home for many.

The Borderline Bar and Grille in Thousand Oaks, California, had become a gathering place for survivors of the Oct. 1 mass shooting. On Friday night, Oct. 1 survivors gathered at the Community Healing Garden to remember those who died in Wednesday’s shooting, which happened during the bar’s weekly College Country Night.

“This one is especially hard,” Stacie Armentrout, 38, told the crowd at the Las Vegas Community Healing Garden, describing the “family” of Route 91 survivors.

Armentrout, who survived the Oct. 1 shooting with her husband and children, led the group in a 12-second-long moment of silence for the 12 victims of Wednesday’s shooting. Her voice cracked when she read their names, tears running down her face by the time she reached 27-year-old Telemachus Orfanos.

She said Orfanos “helped so many on Route 91 escape; he was one of our heroes that night.”

“I met him at an event once,” she said after the vigil. “I know that him and another guy had helped several people get out that night.”

After the vigil, Jason Proctor, 45, stood near an American flag at half-staff. After his wife survived the Oct. 1 attack, in which his neighbors were killed, the Thousand Oaks shooting felt “close to home,” he said.

Proctor said he’s made plaques honoring Route 91 victims. He plans to hand-deliver another to Jason Coffman, a father who was shown on television after the Thousand Oaks shooting desperately trying to find his 22-year-old son, Cody, one of the 12 victims.

What bothers Proctor more than anything, he said, is that it feels like mass shootings have become “almost normal.”

“That’s the worst,” he said, “seeing the flags at half-mast all the time.”

Delna Lancaster, 50, and Mark Strickland, 51, both survived the Route 91 shooting and are engaged. Strickland said he felt for the family of Ron Helus, a 54-year-old Ventura County Sheriff’s Department sergeant killed in Thousand Oaks shooting.

“He paid the ultimate sacrifice,” Strickland said. “But he engaged the threat like you’re supposed to, and he gave his life to save other people. He was a true hero.”

After this latest mass shooting, Lancaster said she felt frustration along with sadness.

“I can’t understand why this is happening way too often,” she said. “I don’t know what can be done.”