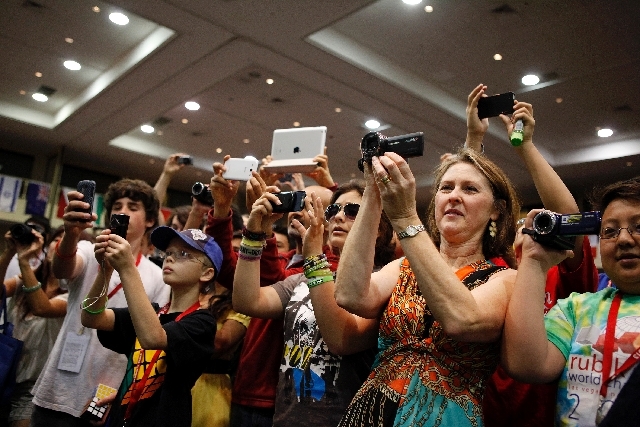 Friends and family take pictures and video during a timed event at the Rubik's Cube World Championships at the Riviera in Las Vegas Saturday. 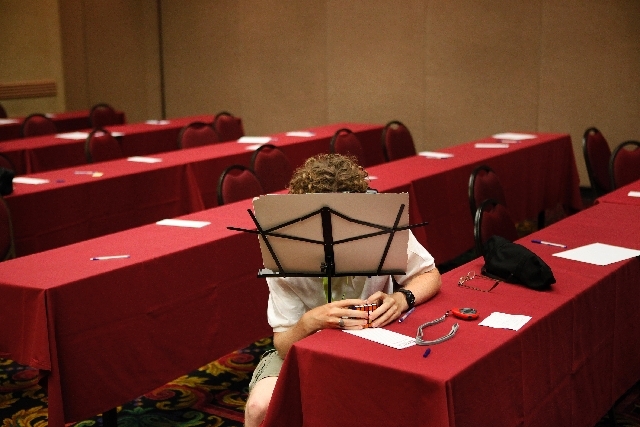 In the main area of the Reivera convention hall Saturday, the constant clicking of hundreds of Rubik's Cubes rattle away, mirroring the incessant ringing of slot machines in the casino. 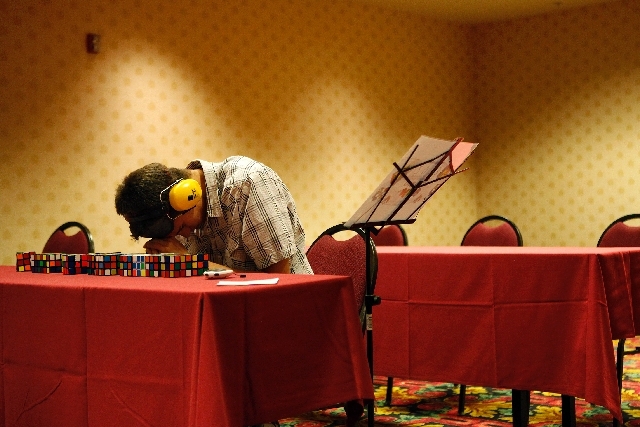 Marcin Zalewski commits moves to memory while competing in a blindfolded event at the Rubik's Cube World Championships at the Riviera in Las Vegas Saturday. 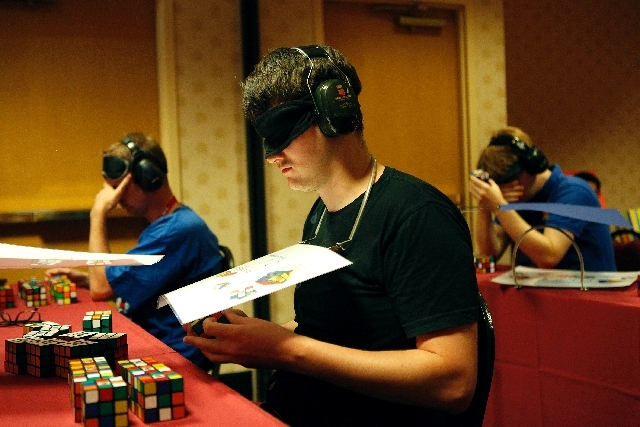 David Andersson competes a blindfolded event at the Rubik's Cube World Championships at the Riviera on Saturday. 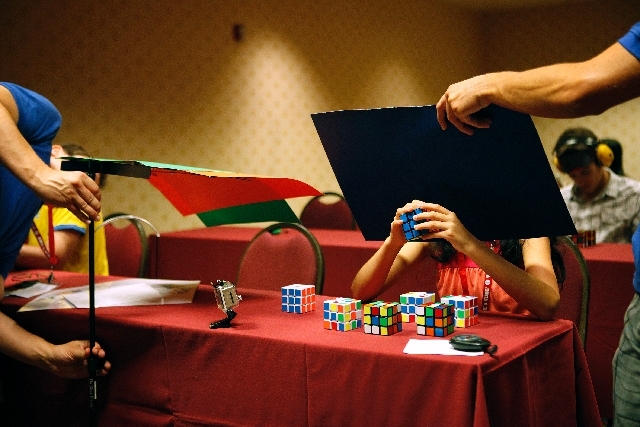 Judges hold up pieces of paper to block the sight of an entrant during a blindfolded event at the Rubik's Cube World Championships at the Riviera in Las Vegas Saturday.

In the same building where Barbra Streisand, Dean Martin and Elvis Presley performed over 50 years ago, more than 600 people from 37 countries came to show off their Rubik’s Cube talents Saturday.

The three-dimensional puzzle and toy drew competitors of all ages to the Riviera for the three-day Rubik’s Cube World Championships.

Some people wore Rubik’s Cube T-shirts that said “Just peel the stickers off.” One woman walked around with a Rubik’s Cube purse.

Thousands of clicks coming from thousands of Rubik’s Cubes sounding like violent typing on a typewriter echoed through the Strip hotel-casino’s convention center as participants tried to find the quickest way to solve the cube.

“I used to practice eight or nine hours a day,” said 18-year-old Jackson Worley. “But now it’s more like one to two hours a day.”

Worley, who has won tournaments in his home state of Colorado, began playing with Rubik’s Cubes in 2007 and entered his first competitive tournament in Denver in 2008.

“A lot of it is practicing and getting comfortable with how the cube works,” he said. “It’s inherently mathematical in theory, but all you really need to do is see what goes where.”

Just like Worley, George Agatep said he used trial and error to hone his skills. Agatep, a math tutor from Mira Loma, Calif., said he doesn’t use much math when trying to solve the cube.

“When I started seven years ago I messed up but then I just practiced and figured it out,” he said.

Agatep uses his own method to solve the cube as opposed to what he called the “regular” method in which people break the cube down by rows.

“I like to start with the corners, the two opposing sides, and then the middle,” he said. “I didn’t use any books or anything. I like these events because I like meeting new people and tripping them out with my method.”

Joey Gouly, a 23-year-old resident of Cambridge, England, said it’s the people who bring him back to these events.

“It’s cool seeing my friends in different parts of the world for this,” he said. “The best part of it all is seeing people new and old. That’s why I’m here.”

Gouly solved the cube in the lower stages of six seconds since he began playing back in 2007. Since then, he has been to 15 countries to compete in tournaments.

Despite the skill and practice that comes with learning how to master the Rubik’s Cube, competitors said meeting new people is the best part of the experience.

“I just decided it would be a cool thing to do and I’ve made so many friends through it,” Worley said.

Of course, watching 8-year-olds solve a Rubik’s Cube with one hand in less than two minutes is pretty cool too.