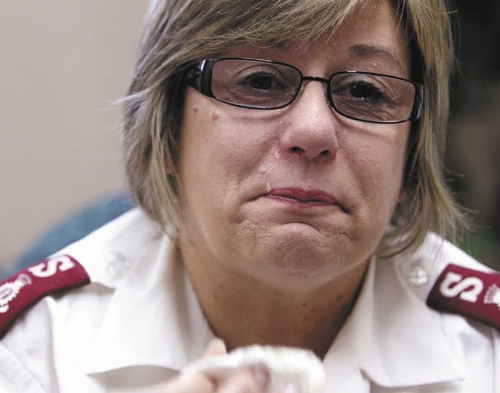 Tony Freeman is a cocaine addict who takes prescription medications for a mood disorder and anxiety.

The 41-year-old expects to be homeless in the next month after The Salvation Army mental health group home he lives in closes because of funding issues.

But the reality is, those measures won’t be enough. There are more cuts to come.

“Without this program or another program to jump into when I leave here, I can very well go back to my addiction,” Freeman said. “I can become suicidal. I can be depressed. Once I’m depressed, I’m not going to take my meds. And when I don’t take my meds, all bets are off. I can either end up in jail or institutions, or I may be dead.”

Freeman said he is “really stressed” because he has “nowhere to go.”

Both clients and staff found out Tuesday that jobs and resources were being cut from the Owens Avenue campus, near Main Street.

The Salvation Army officials called the decision “heartbreaking, devastating and difficult” but ensured that “no one will just be tossed out on the street.”

The programs affected include a group home for the chronically mentally ill that serves 42 people, a semi-independent housing program offered through Clark County’s mental health court that serves 32 people and the organization’s outreach program.

Over the next three to four weeks, the plan is to relocate clients and find them “suitable programs and housing” through other agencies, said Rhonda Lloyd, a major at The Salvation Army.

If nothing else, the group shelter is still open, but that is “not our first choice,” Lloyd said.

“Unfortunately, I cannot assure them that those services will be available elsewhere,” Lloyd said. “But I can assure them we’re doing everything we can to find those services for them. We have not abandoned them. We’re not closing the door, and they’re on their own.”

Services that will continue include the day resource center, vocational programs, children’s programs, apartments and meals served at the Owens Avenue campus. The group feeds 1,200 people per day and houses close to 600 people a night.

For years, the group has been filling the gap created by dwindling state and federal funds but no longer can afford to do so. One program, which wasn’t identified, has a $500,000 deficit each year. And private donors aren’t giving as much as they used to.

“This is not an issue of inappropriate use of funds or of the program not being run properly; it simply is a funding gap,” Lloyd said.

“We help people no one else will help, that people will kind of hope go away,” she said. “Sometimes, mental health is scary. Sometimes we don’t want to admit it’s there and leads to other things we like to think are people’s fault. It’s not an easy fix. It’s an ongoing issue.”

“We’re learning coping skills and life skills,” Freeman said. “They’re the ones who keep us clean and sober and keep us from contemplating suicide.”

Nahjala Pray, a mental health technician who worked in the group home, lost her job Tuesday.

“My major concern is what’s going to happen to these people?” Pray said. “These are people who had drug and alcohol problems with mental health issues. Some, if we felt they were going to lash out and hurt themselves or other people, we would help them deal with their anger through cooking or poetry or help them work on their resume. I won’t be able to help them like I promised. I’m just so worried about what’s going to happen next.”