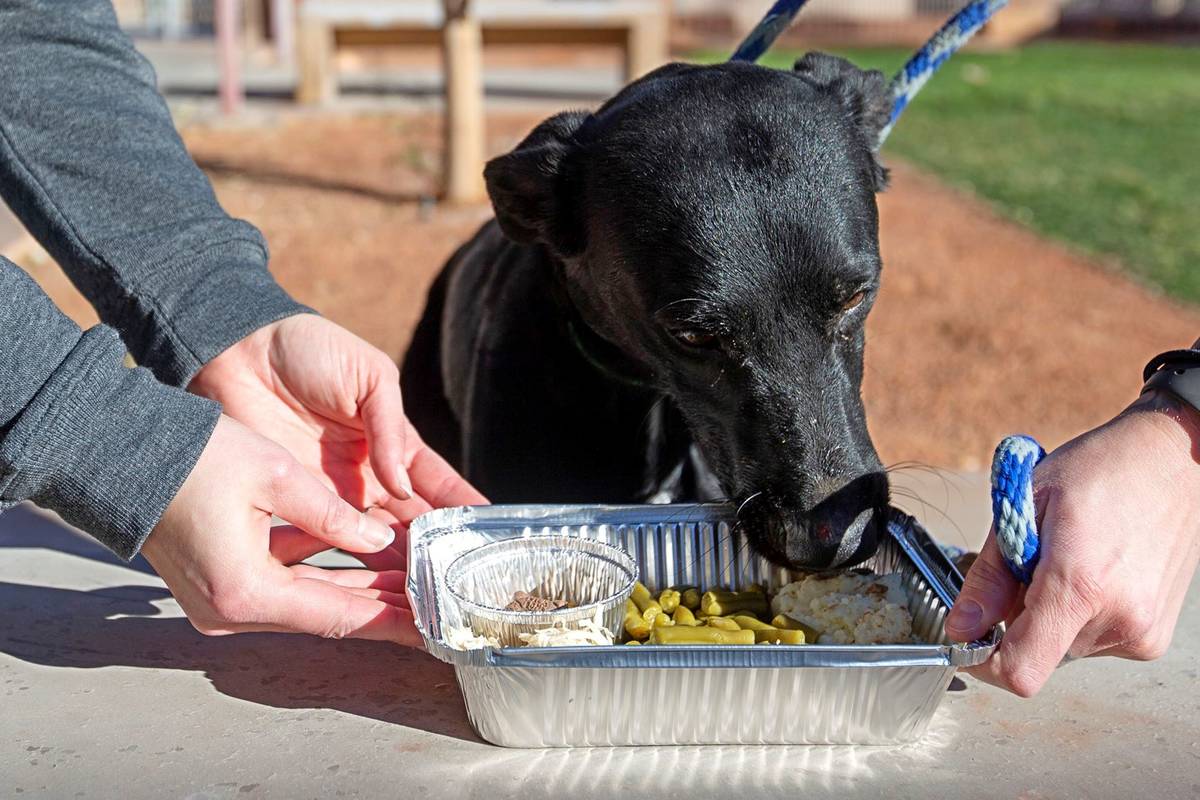 3-year-old Dooley enjoys a "PUPSgiving" meal donated by Barx Parx at City of Henderson Animal Care and Control on Wednesday, Nov. 25, 2020, in Las Vegas. The organization donated 70 meals to the shelter for the holiday season.(Ellen Schmidt/Las Vegas Review-Journal) @ellenschmidttt 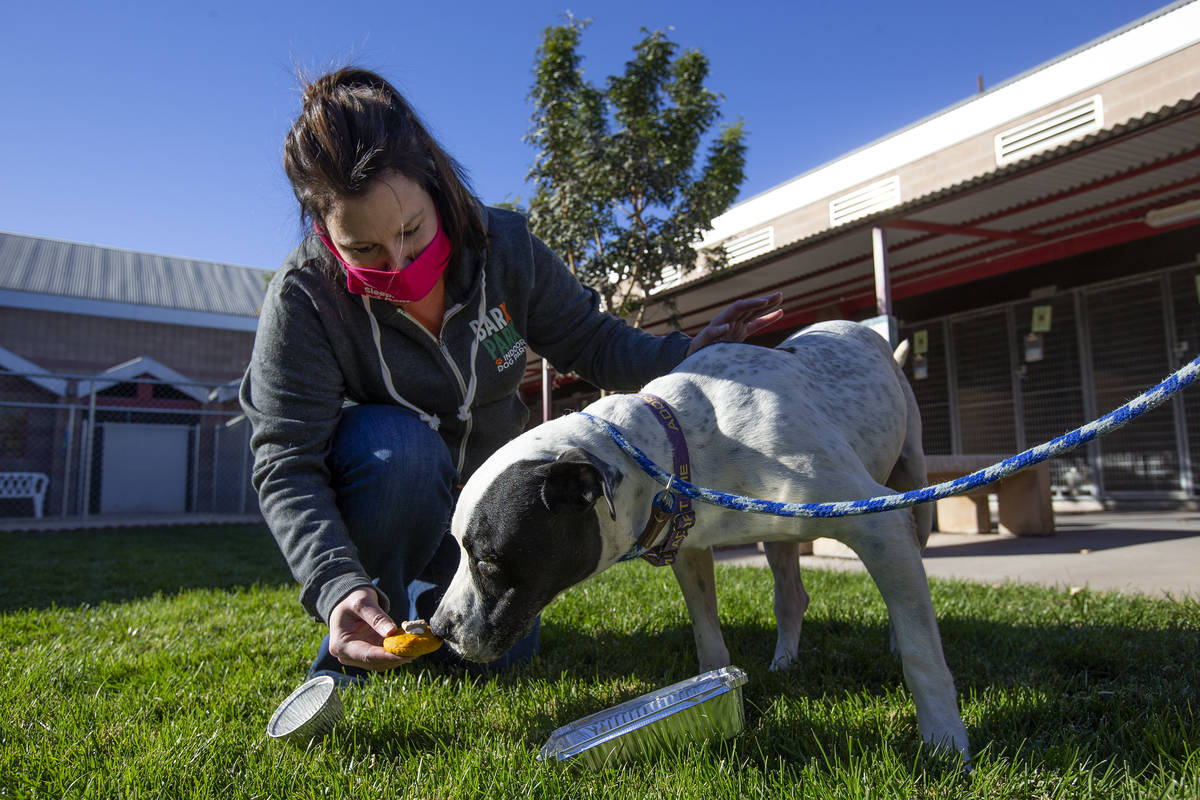 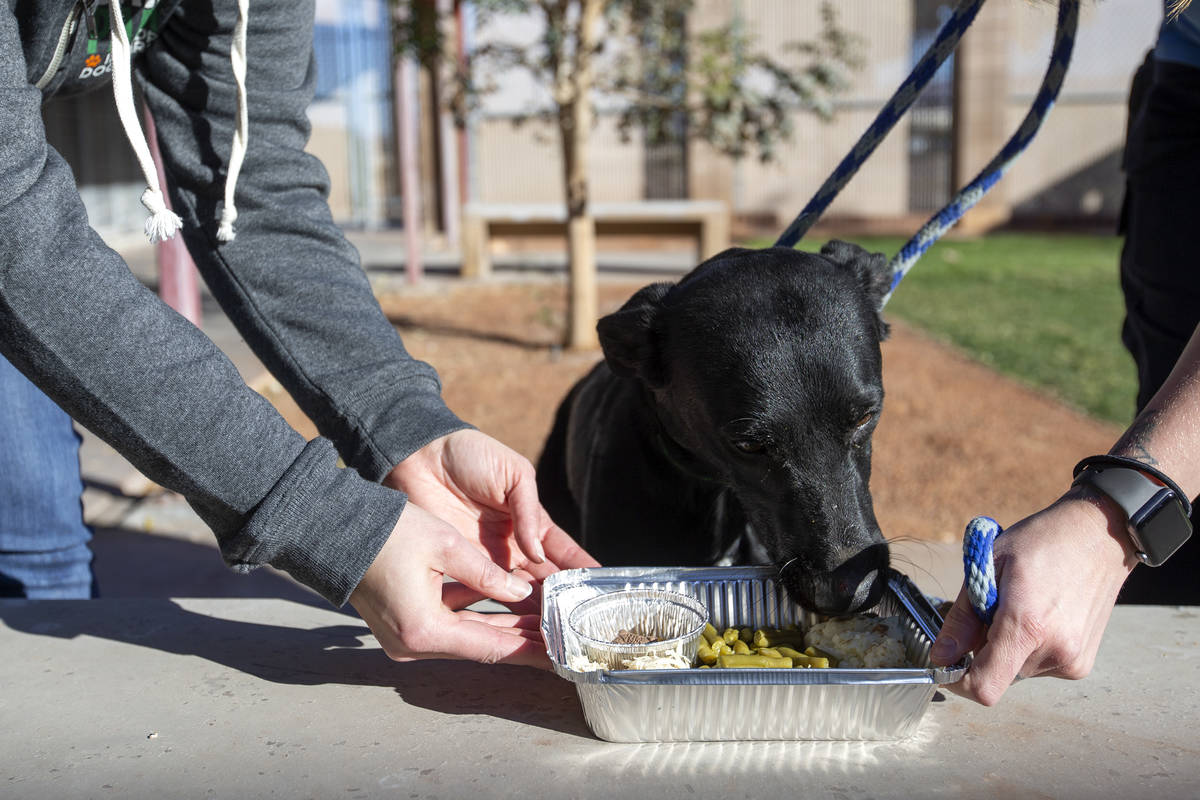 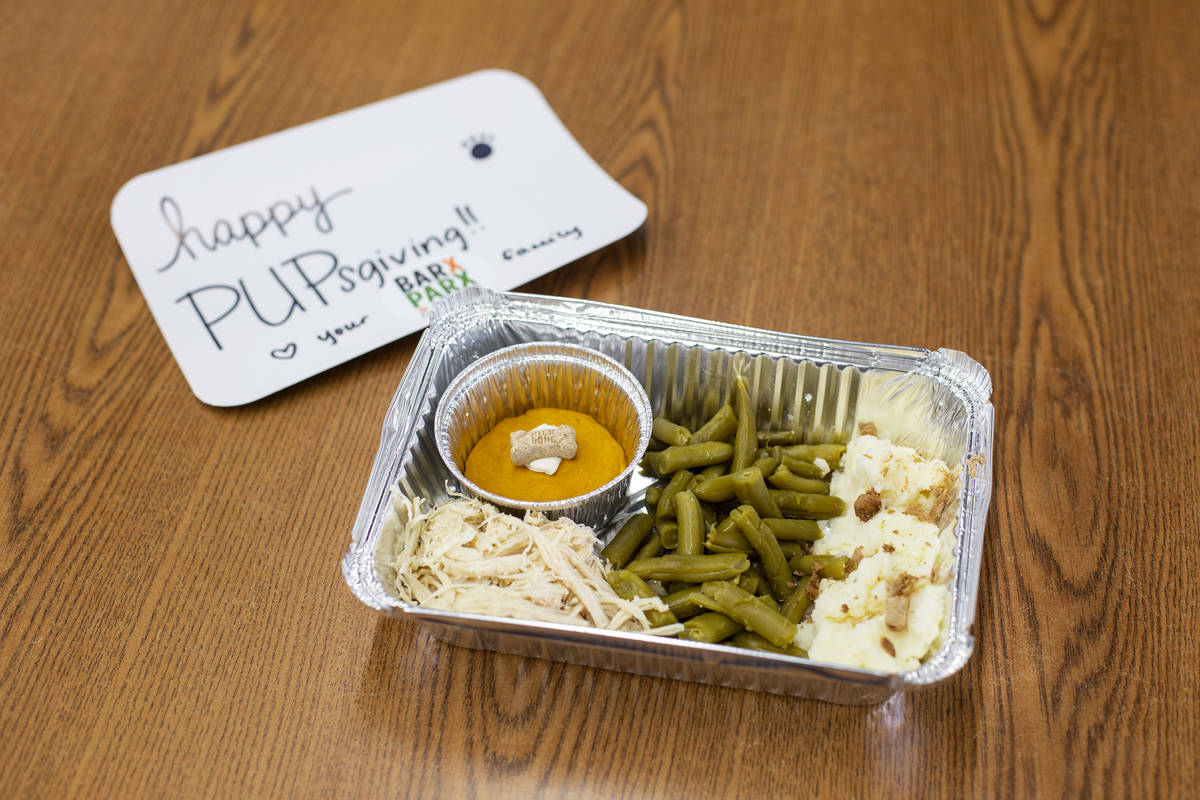 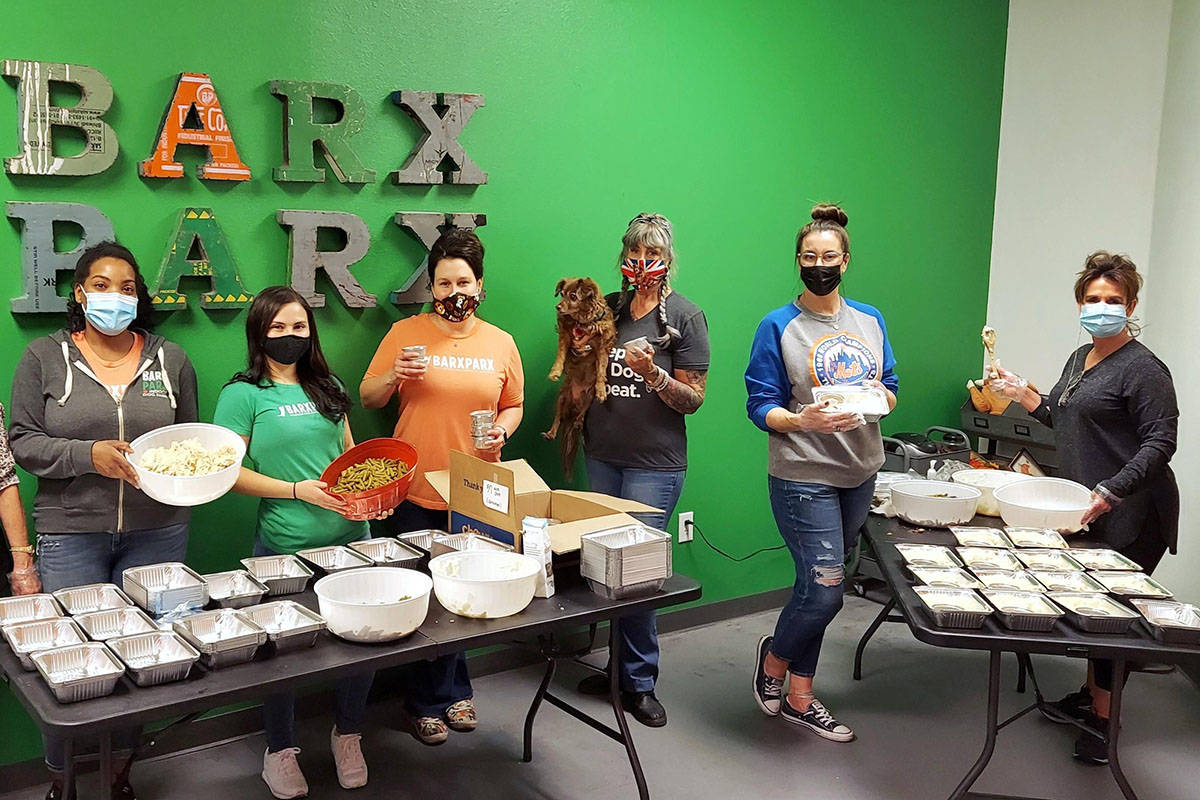 An assembly line of volunteers on Sunday, Nov. 22, 2020, preps "PUPsgiving" meals inside Barx Parx to drop off at Henderson Animal Shelter and Nevada SPCA. (Jen Freet) 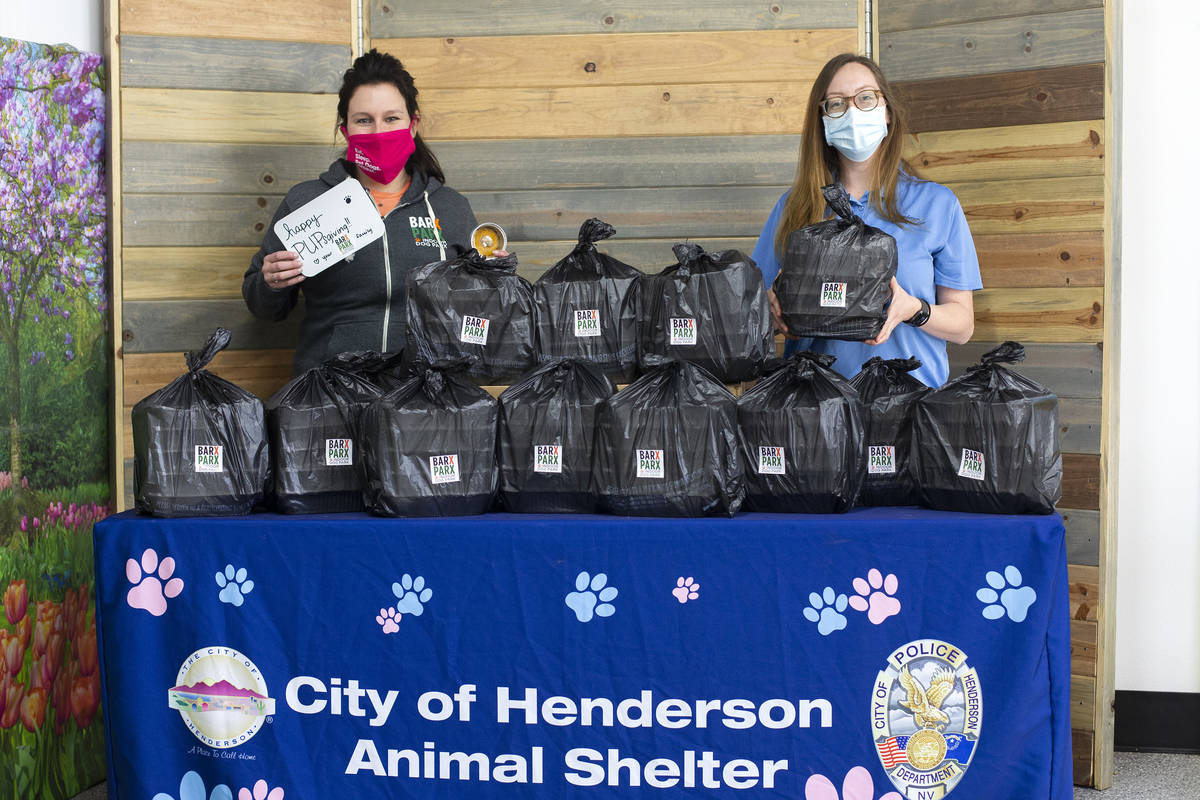 Jen Freet, owner of Barx Parx, left, and Kianna Dombrowski, kennel attendant at the Henderson Animal Shelter, pose for a photo with the 70 meals the organization donated to the shelter at City of Henderson Animal Care and Control on Wednesday, Nov. 25, 2020, in Las Vegas. (Ellen Schmidt/Las Vegas Review-Journal) @ellenschmidttt 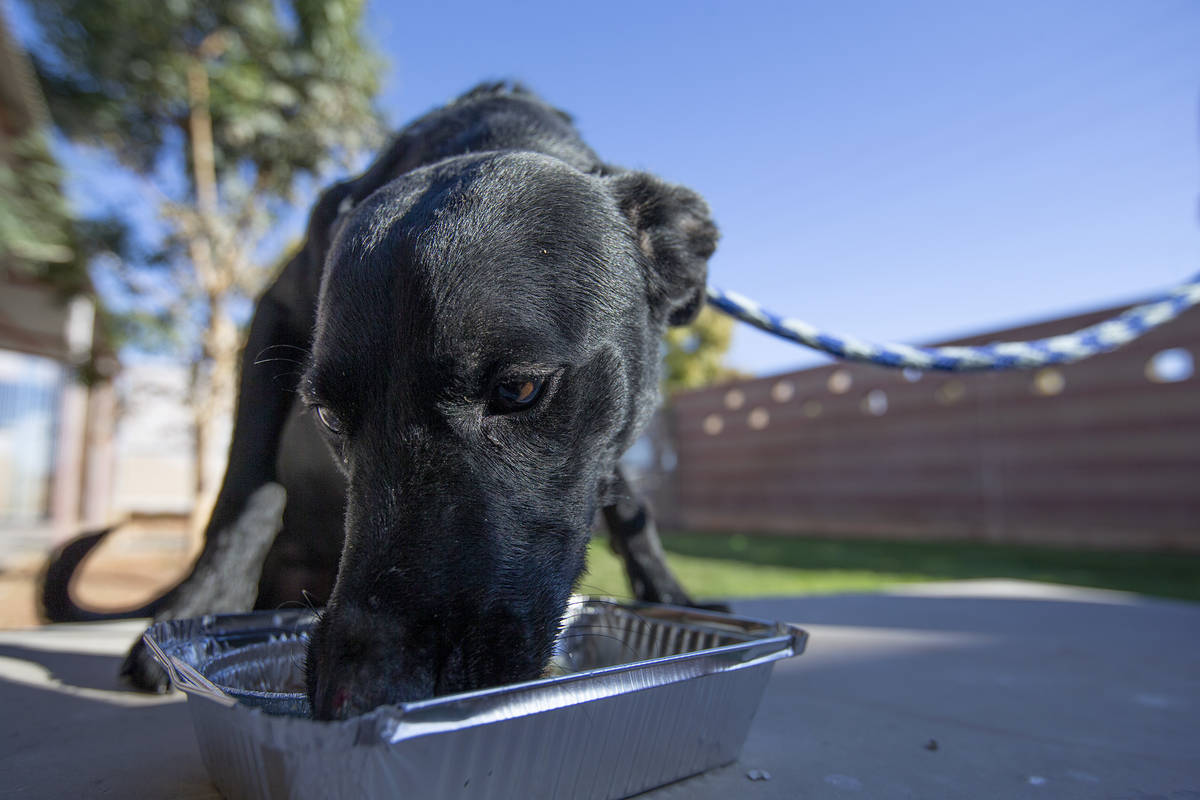 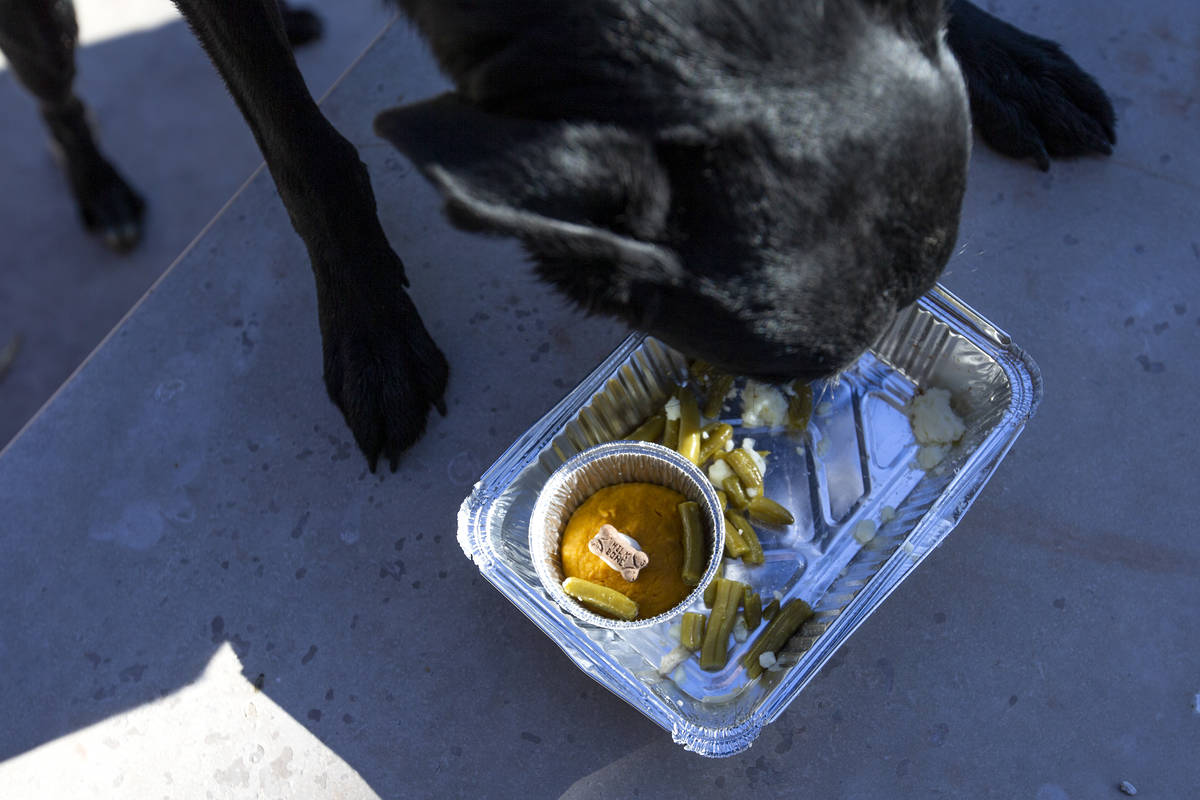 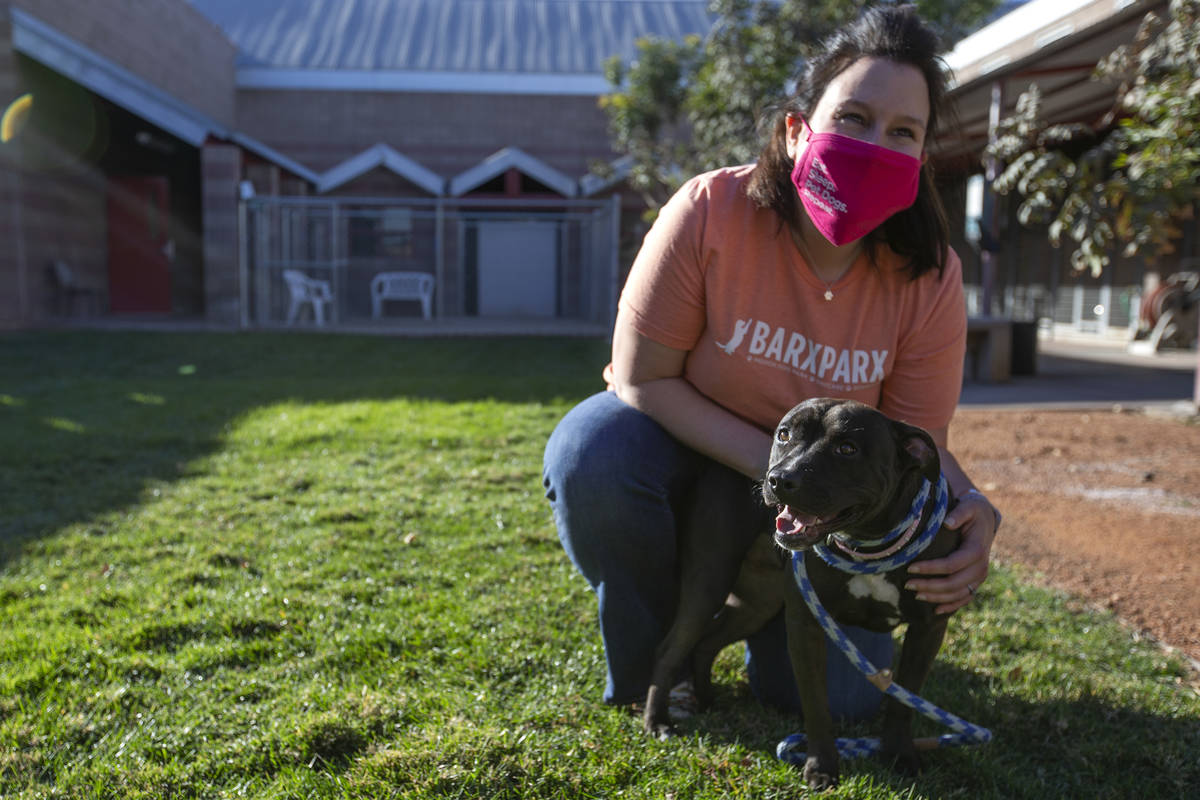 The owner of Barx Parx plays with Precious, who is up for adoption, after delivering 70 "PUPSgiving" meals to dogs at City of Henderson Animal Care and Control on Wednesday, Nov. 25, 2020, in Las Vegas. (Ellen Schmidt/Las Vegas Review-Journal) @ellenschmidttt 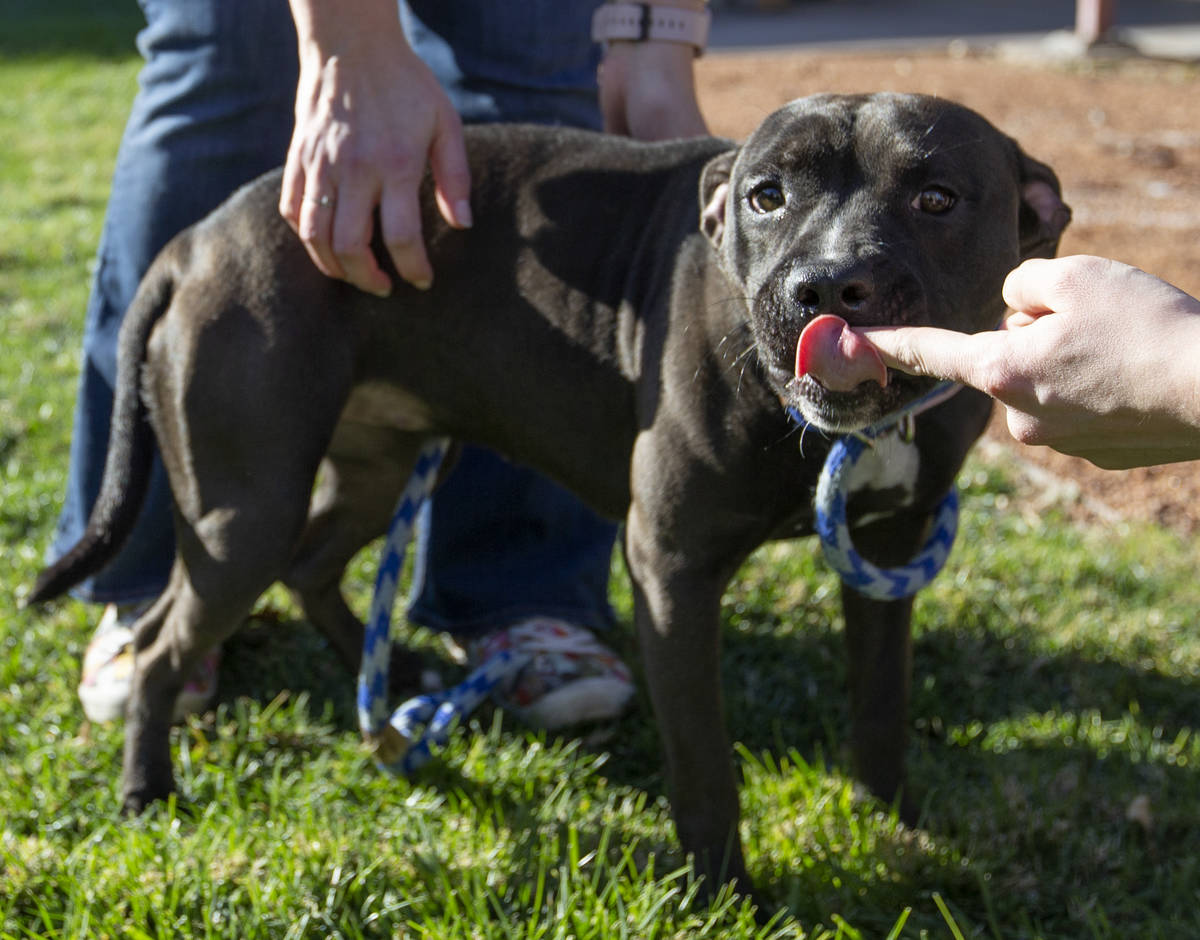 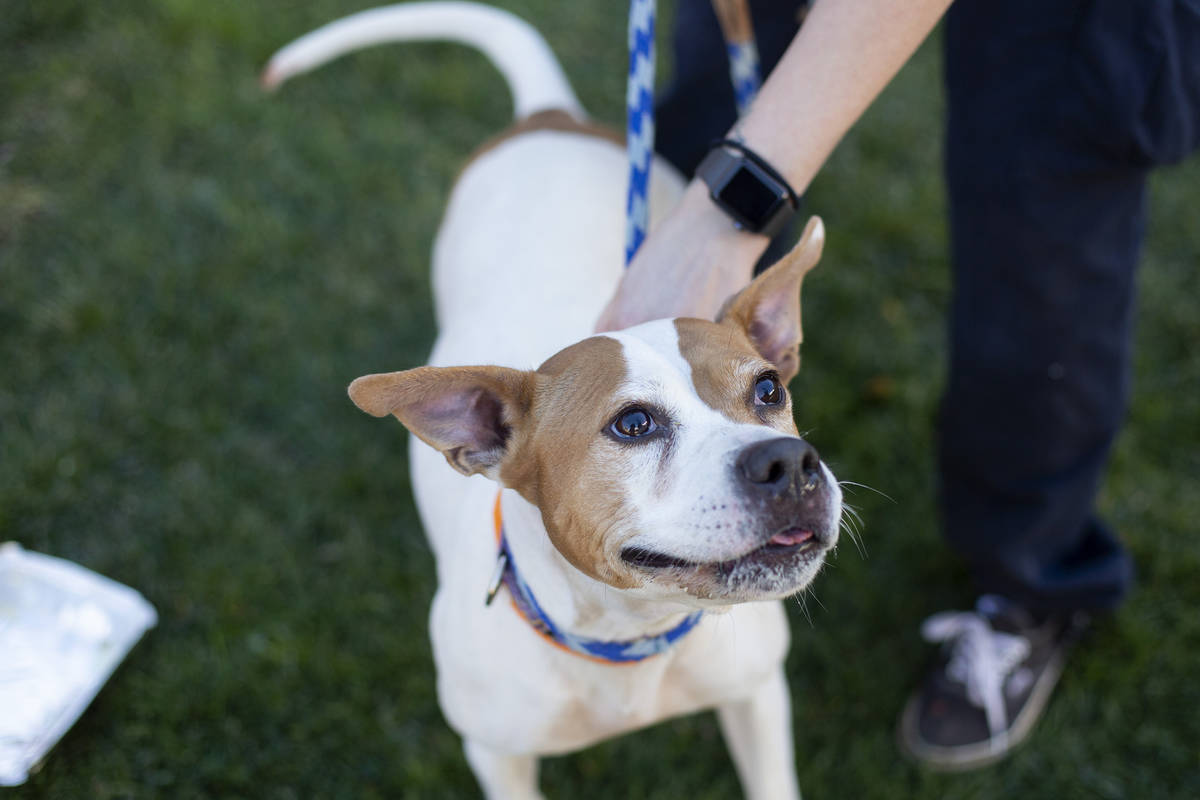 Bebe, who is up for adoption, is excited to eat her "PUPsgiving" meal donated by Barx Parx at City of Henderson Animal Care and Control on Wednesday, Nov. 25, 2020, in Las Vegas. (Ellen Schmidt/Las Vegas Review-Journal) @ellenschmidttt 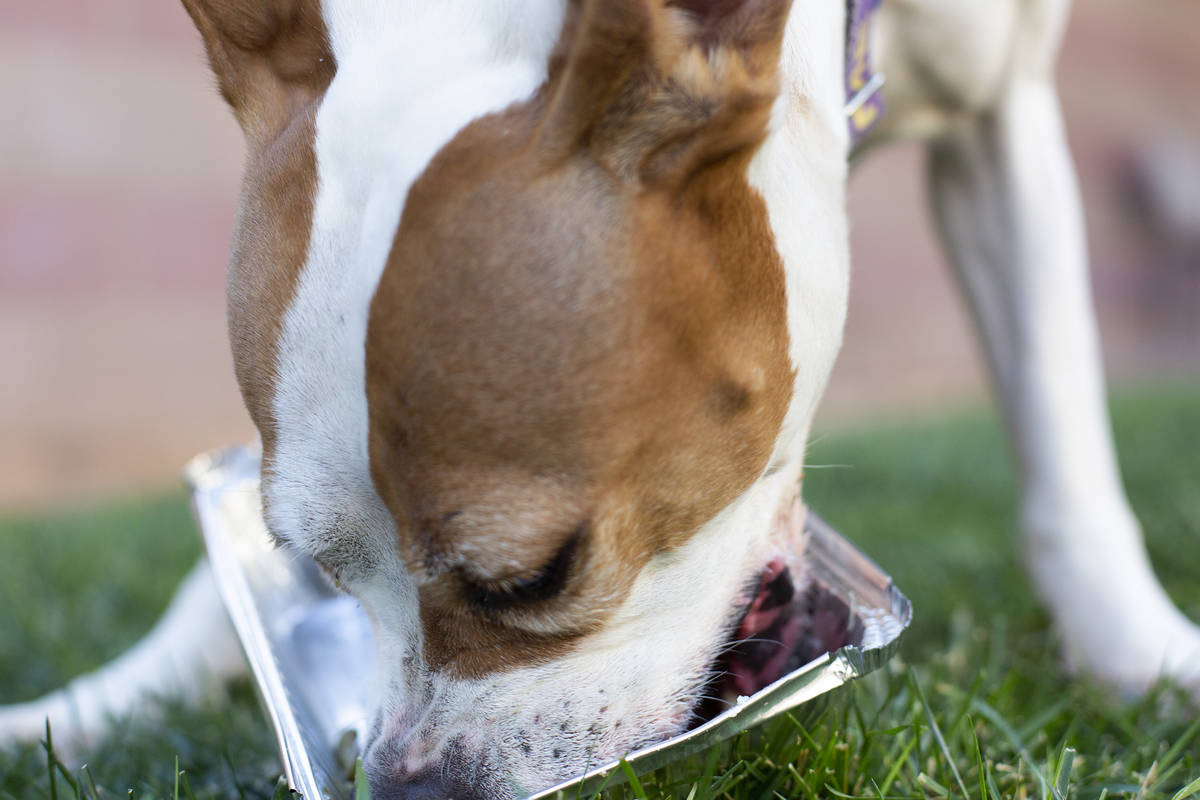 Bebe, who is up for adoption, gobbles up a "PUPsgiving" meal donated by Barx Parx at City of Henderson Animal Care and Control on Wednesday, Nov. 25, 2020, in Las Vegas. (Ellen Schmidt/Las Vegas Review-Journal) @ellenschmidttt

Some shelter dogs are wagging their tails a little harder this Thanksgiving.

Thanks to a donation drive by Barx Parx, an indoor dog park in Las Vegas, several dogs will feast on a meal filled with all of the holiday’s staples.

In early November, Barx Parx started a donation drive so shelter dogs could be treated to “PUPsgiving” meals, which include shredded chicken, green beans, mashed potatoes topped with dehydrated turkey and a mini “PUPkin” pie for dessert.

Barx Parx received over 100 donations to give $10 PUPsgiving meals to Henderson Animal Shelter and Nevada Society for the Prevention of Cruelty to Animals.

Around 40 dogs at Nevada SPCA and over 20 dogs at the Henderson Animal Shelter will receive PUPsgiving meals.

“For the dogs who don’t have a family or home, we feel like we’re giving them an extension of our families by providing them with a Thanksgiving meal,” said Amy Lee, communications manager at Nevada SPCA.

Most dogs that end up in Nevada SPCA are surrendered by owners — people unable to take care of their pets because they’re moving, facing financial challenges or have allergies. The Henderson Animal Shelter mainly carries stray holds, dogs on legal holds, and owner surrenders.

“Receiving donations like this rejuvenates our shelter staff and animal control officers,” said Danielle Harney, animal control administrator at Henderson Animal Shelter. “It feels good knowing members of our community care about the animals and the work we’re doing matters to them.”

Freet’s idea to create meals for dogs flourished two years ago when she began cooking meals at home for Barx Parx’s boarding dogs. She said 2019 was the first year she offered her home-cooked meals to people and their dogs to enjoy at home.

“It exploded,” Freet said. “The members at Barx Parx and their dogs wanted more.”

After the positive response, Freet decided to take it up a notch by creating PUPsgiving meals for Thanksgiving this year.

Freet said deep freezers and slow cookers have become her best friends since she started making the dog meals.

“Shelter dogs hold a special place in my heart. I fully believe, just like humans, dogs are the same way. We all have our own quirks, and we’re all kind of waiting to find our own tribe,” Freet said. “It means a lot to me that these dogs are being cared for.”

Over 100 PUPsgiving meals were dropped off on Wednesday at Henderson Animal Shelter and Nevada SPCA and will be fed to the shelter dogs on Thanksgiving morning.

Freet said extra meals will be fed to cats at the shelters and given away throughout Thanksgiving weekend. Some meals will go into the freezer and be saved for Christmas. A portion of the proceeds are going back to local rescues.