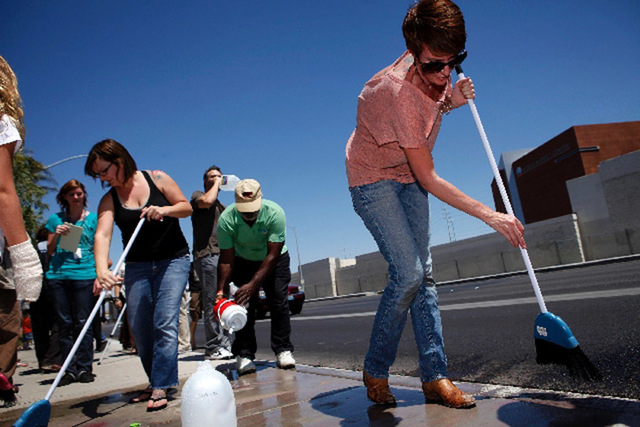 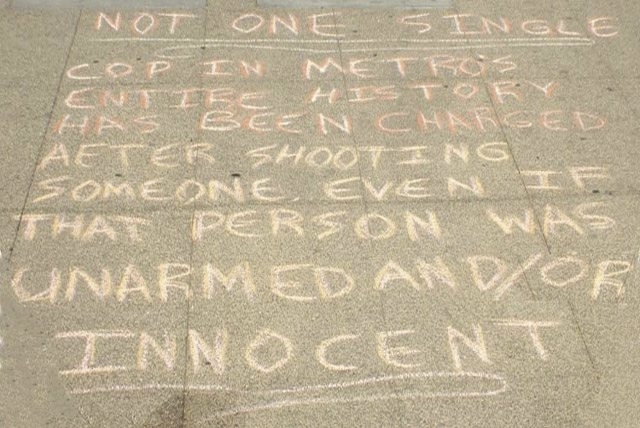 Four protesters have been charged in connection with messages written in chalk outside the Metropolitan Police Department's headquarters and in front of the Regional Justice Center. The one above reads: "Not one single cop in Metro's entire history has been charged after shooting someone. Even if that person was unarmed and/or innocent."

Four activists who express themselves with sidewalk chalk filed a civil rights lawsuit Friday against the Metropolitan Police Department.

According to the federal lawsuit, the department has engaged in “a policy and practice of deliberate indifference to the constitutional rights of individuals engaging in peaceful protests.”

“Plaintiffs have been improperly arrested, cited, and harassed for engaging in free speech,” the complaint alleges.

The lawsuit was filed by four Clark County residents who “have, and continue to, peacefully protest the practices” of Las Vegas police: Brian Ballentine, Catalino Dazo Jr., Kelly Patterson and Gail Sacco. They are represented by attorneys Maggie McLetchie and Robert Langford.

According to the lawsuit, the Police Department has allowed its officers to harass, cite, arrest and search the plaintiffs “for peacefully writing in water-soluble chalk on a public sidewalk” that Las Vegas police officers had instructed them to write on.

The document claims these actions violated the plaintiffs’ “constitutional rights to free speech, expression and assembly, rights to be free from unreasonable searches and seizures and unlawful arrests, and substantive and procedural due process rights.”

Additional state tort claims in the lawsuit include false imprisonment, negligent training and supervision, and intentional and negligent infliction of emotional distress.

The plaintiffs are seeking unspecified damages, as well as a permanent injunction to prevent the Police Department and its officers from violating the rights of individuals who engage in “lawful, protected activity on public forum sidewalks.”

The lawsuit lists numerous chalking protests that took place without incident in Las Vegas from October 2011 through April 2013.

Las Vegas police began harassing protesters on May 1, 2013, according to the lawsuit, and three of the plaintiffs were cited during a protest at the department’s headquarters on June 8, 2013. Sacco was not cited.

On that date, the lawsuit alleges, Sgt. Mike Wallace approached the three protesters and told them that writing with chalk on the sidewalk constituted graffiti. He then detained them on the sidewalk for about 45 minutes, according to the lawsuit.

Although the three plaintiffs were cited for placing graffiti on property, the citations have not been prosecuted.

Wallace is named as a defendant in the complaint, along with Detective Christopher Tucker and Lt. John Liberty.

During two demonstrations in July 2013, protesters used washable colored chalk to write critical statements of police on the sidewalks outside the department’s headquarters and in front of the Regional Justice Center.

As a result of the July protests, Ballentine, Patterson and Dazo were charged with gross misdemeanor counts of placing graffiti on property and conspiring to commit a crime.

Police arrested Ballentine and Patterson on Aug. 10, 2013, while they were walking to the department’s headquarters to chalk, according to the lawsuit.

Ballentine spent three days at the Clark County Detention Center, where he was denied his medications and suffered from anxiety, according to the lawsuit, and Patterson spent four days at the jail.

The charges were later dropped. District Attorney Steve Wolfson said new evidence showed that courthouse marshals had directed the protesters to chalk in a specific location outside the justice center.

“There wasn’t expressed permission, but there was implied permission to use the chalk on the sidewalk outside the courthouse,” Wolfson said.

But McLetchie said the district attorney fails to understand that “the Constitution forbids the government from requiring prior permission before you engage in First Amendment-protected activity.”

According to the lawsuit, the citations issued in June 2013 and the arrests made in August 2013 were designed “to chill future speech.”

When water-soluble chalk is used by children or for purposes other than protesting Las Vegas police practices, the complaint alleges, the department “does not harass, cite or arrest people” for drawing in chalk on public property.

McLetchie said some of the plaintiffs continue to engage in chalk protests, but “they’re scared every time they do it.” Dazo “no longer chalks,” according to the lawsuit.

5
CARTOONS: How McCarthy plans to solve the debt-ceiling standoff