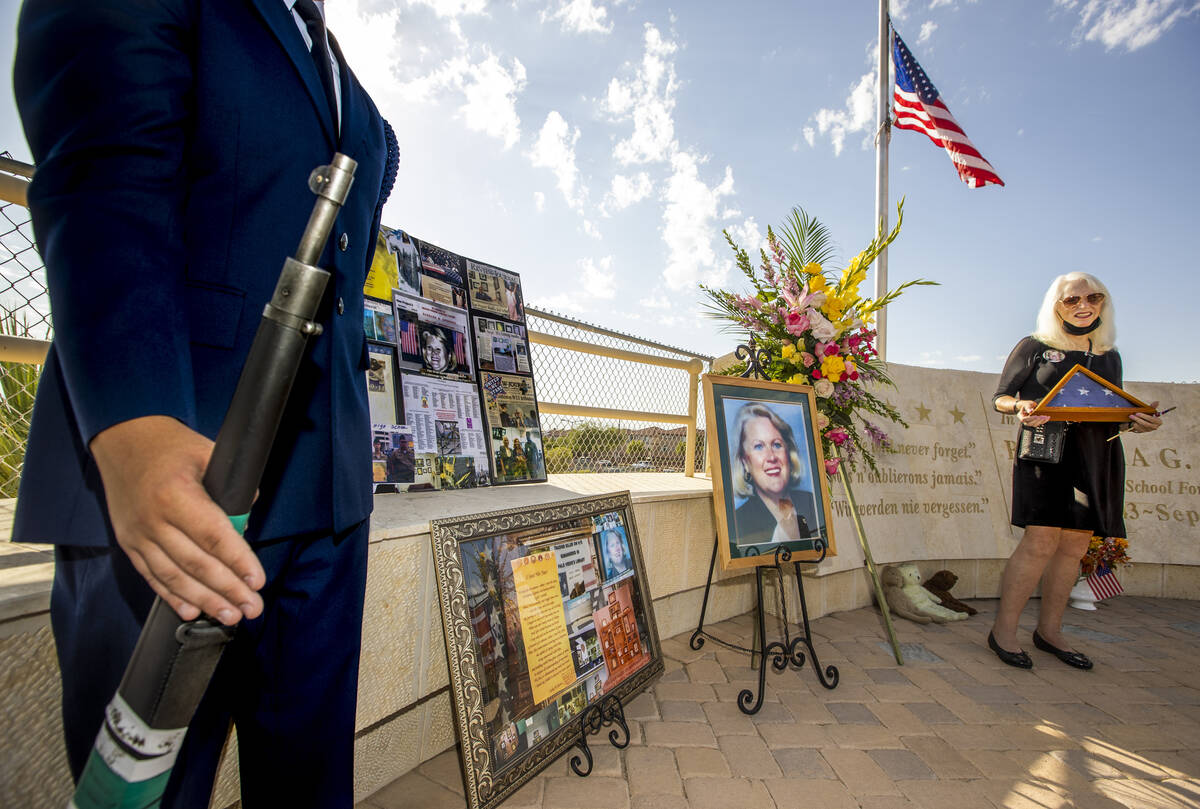 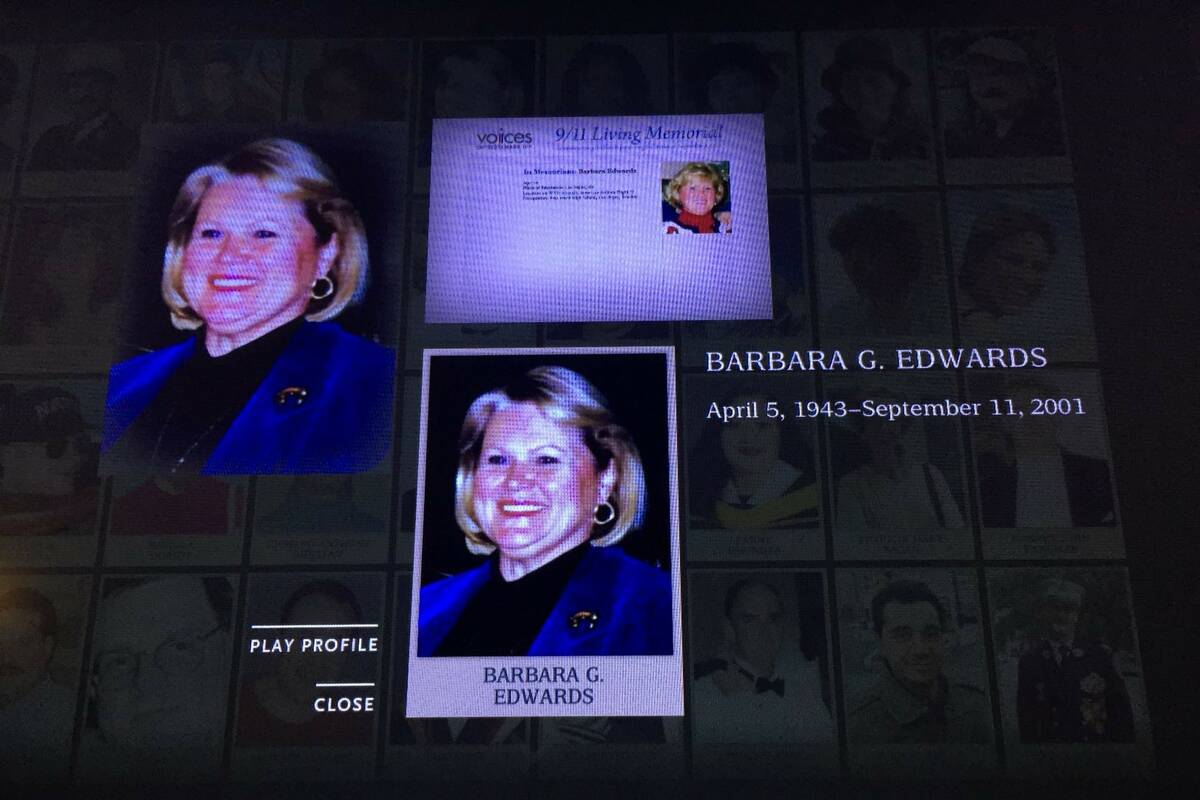 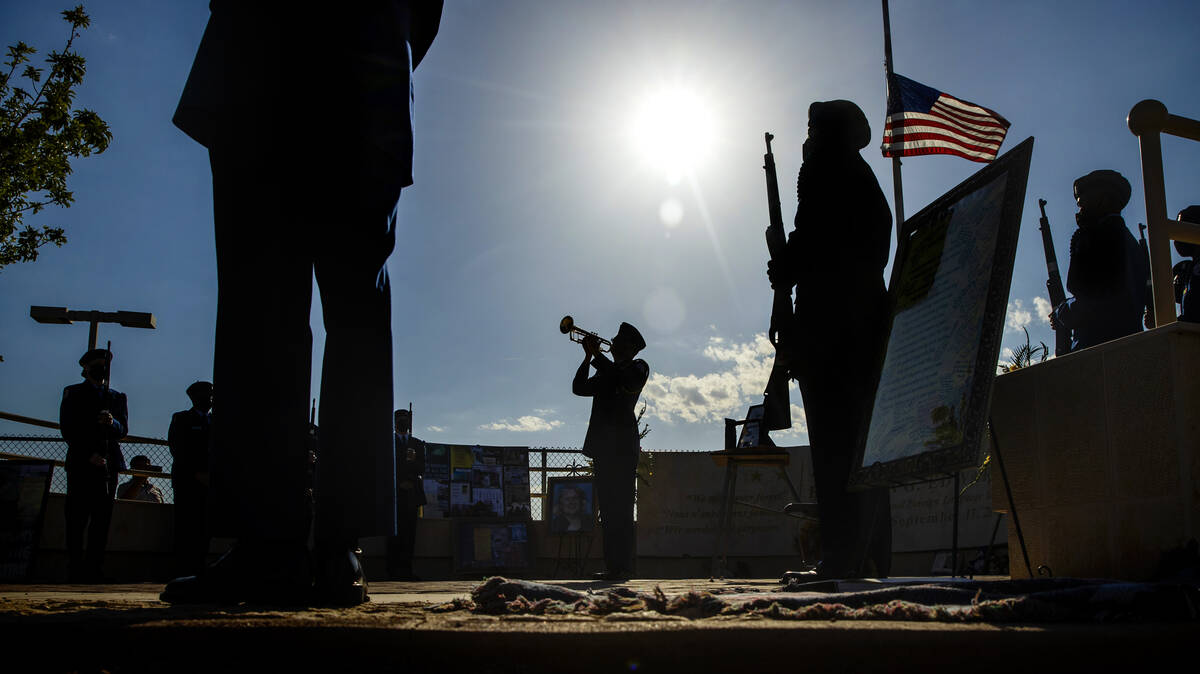 Taps is played by an Air Force JROTC cadet during a ceremony to honor the memory of Palo Verde High School teacher Barbara Edwards, who was killed in the 9/11 terrorist attacks, on Friday, Sept. 10, 2021, in Las Vegas. (L.E. Baskow/Las Vegas Review-Journal) @Left_Eye_Images 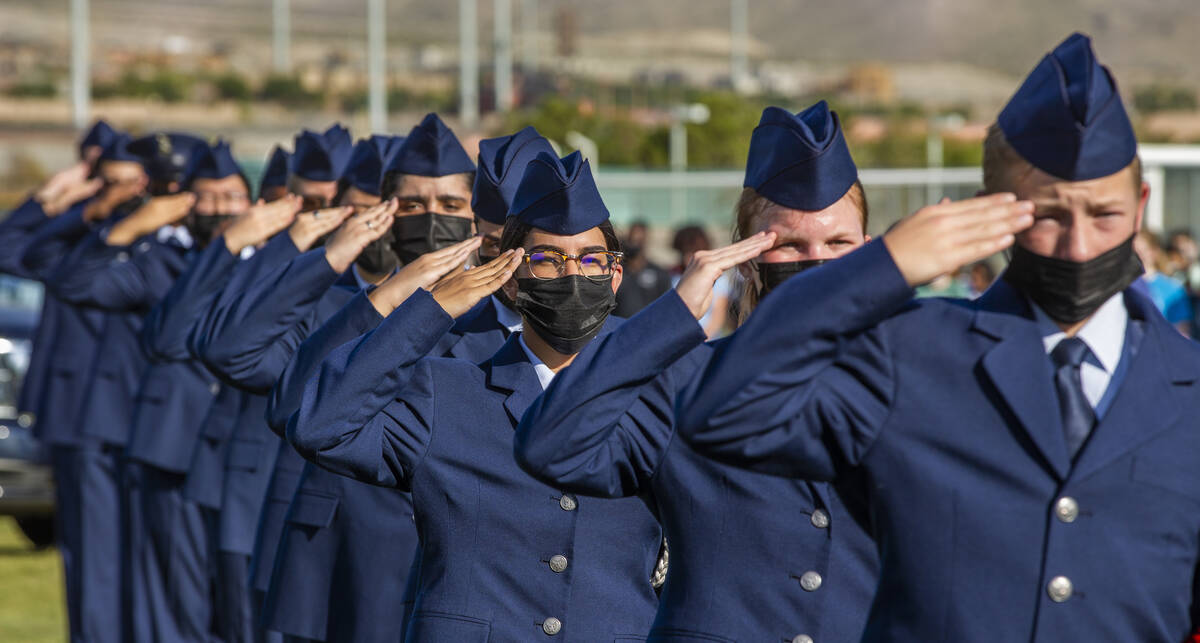 Air Force JROTC cadets salute as the colors are presented during a ceremony to honor the memory of Palo Verde High School teacher Barbara Edwards, who was killed in the 9/11 terrorist attacks, on Friday, Sept. 10, 2021, in Las Vegas. (L.E. Baskow/Las Vegas Review-Journal) @Left_Eye_Images 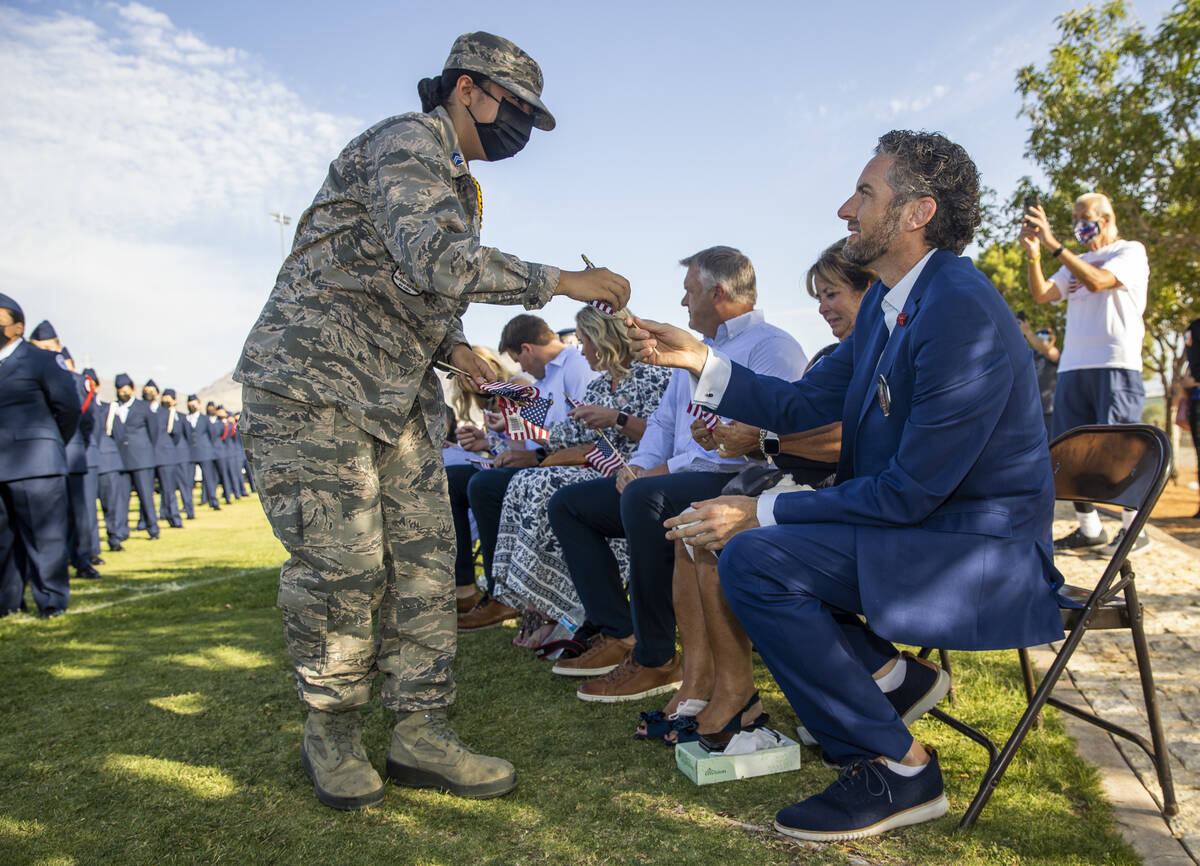 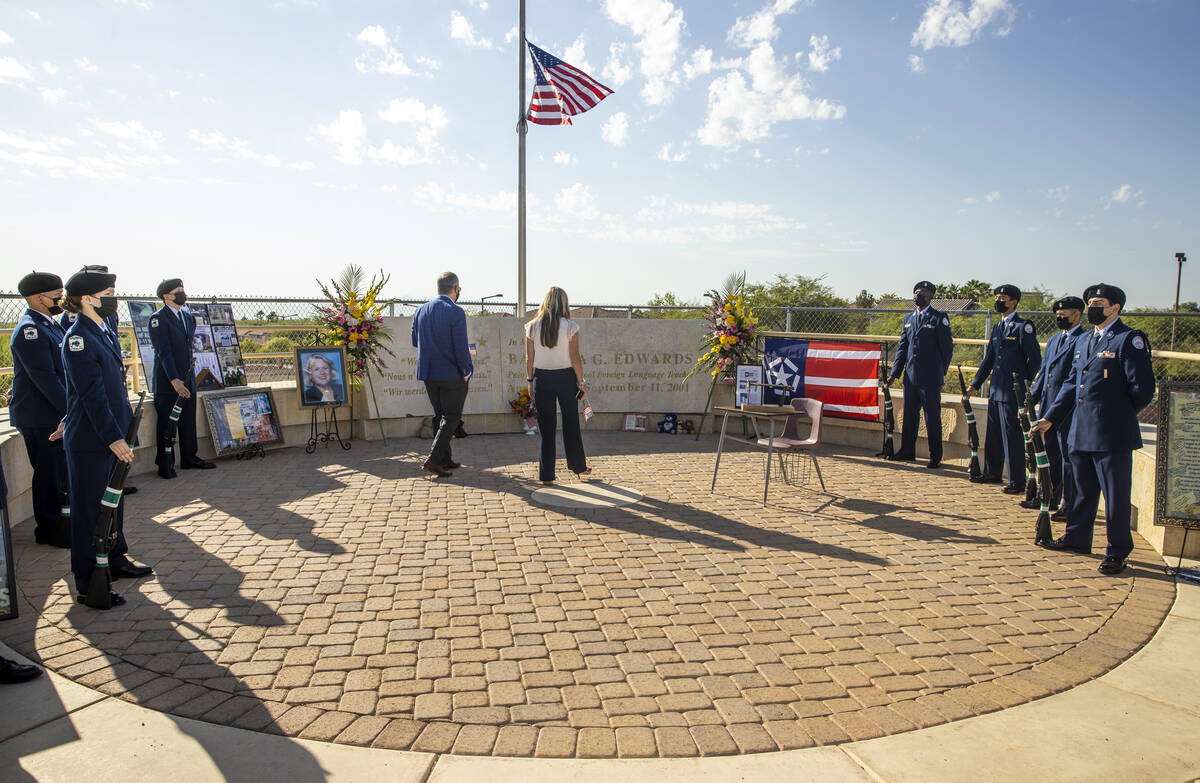 The flag is at half-mast at the permanent memorial during a ceremony to honor the memory of Palo Verde High School teacher Barbara Edwards, who was killed in the 9/11 terrorist attacks, on Friday, Sept. 10, 2021, in Las Vegas. (L.E. Baskow/Las Vegas Review-Journal) @Left_Eye_Images 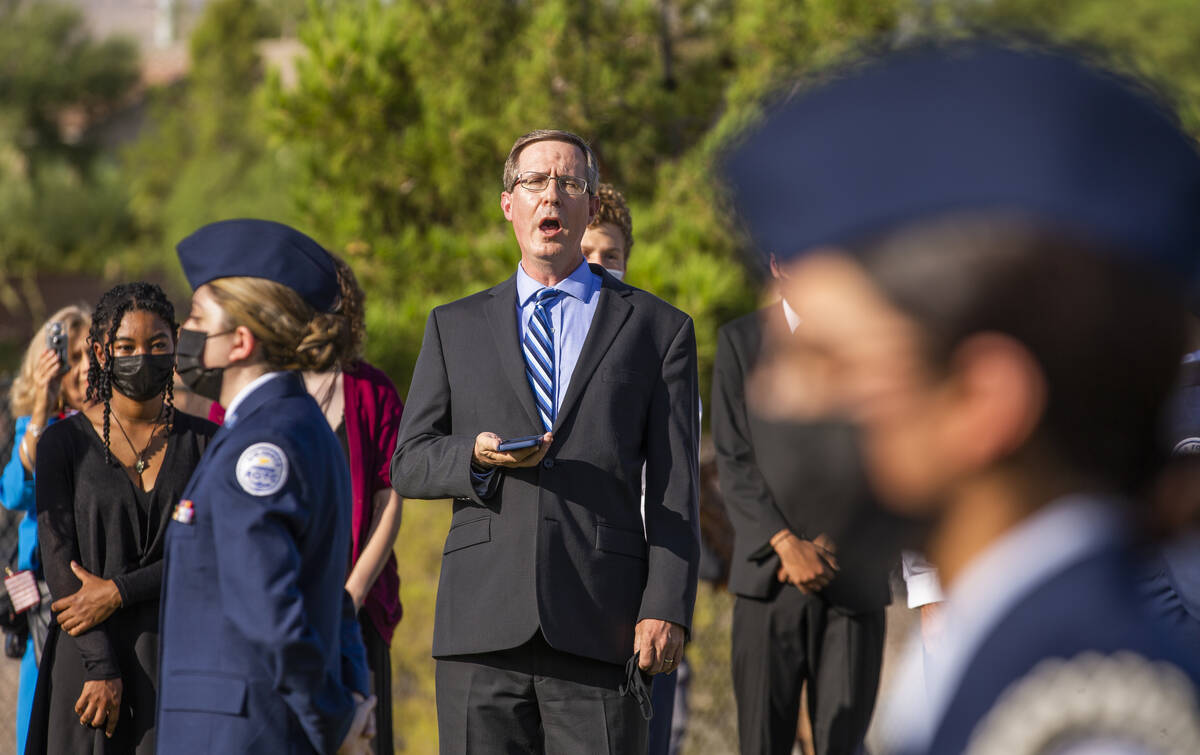 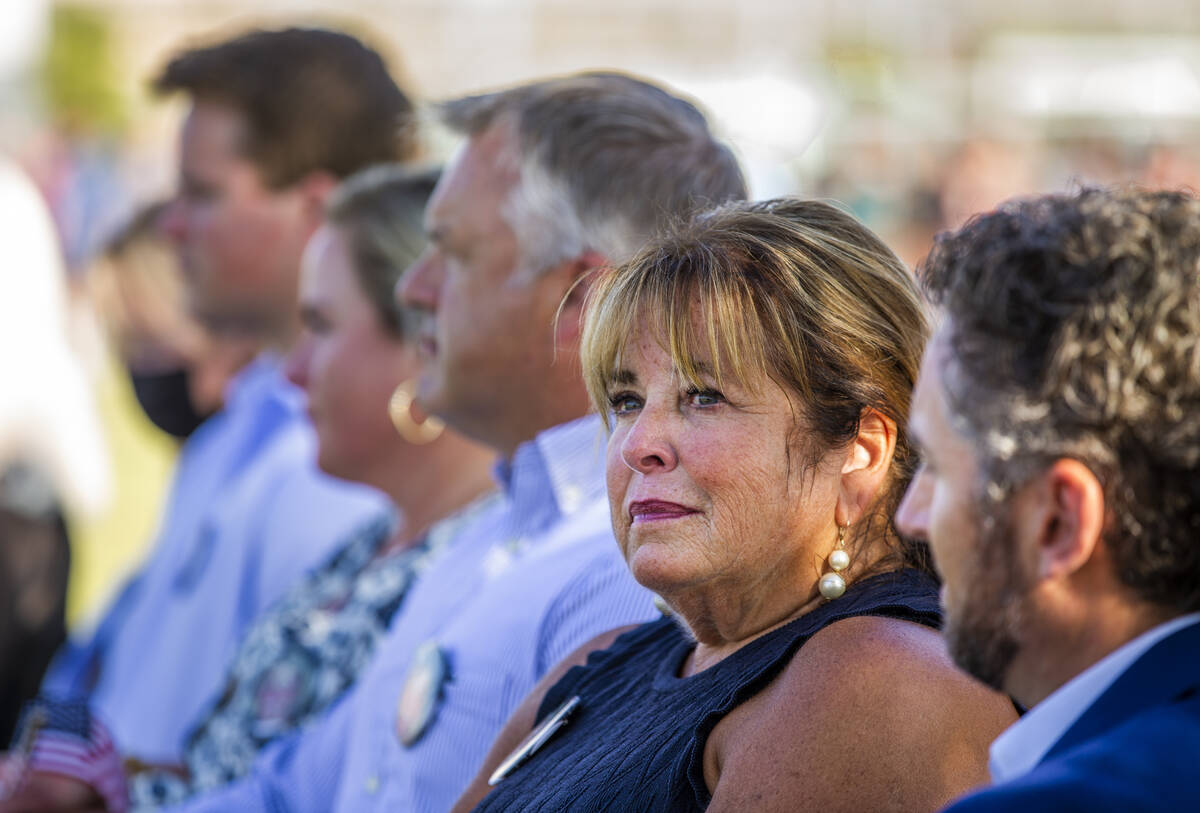 Francine Edwards, center, with Brad Edwards, tears up while listening to music being played during a ceremony to honor the memory of Palo Verde High School teacher Barbara Edwards, who was killed in the 9/11 terrorist attacks. on Friday, Sept. 10, 2021, in Las Vegas. (L.E. Baskow/Las Vegas Review-Journal) @Left_Eye_Images 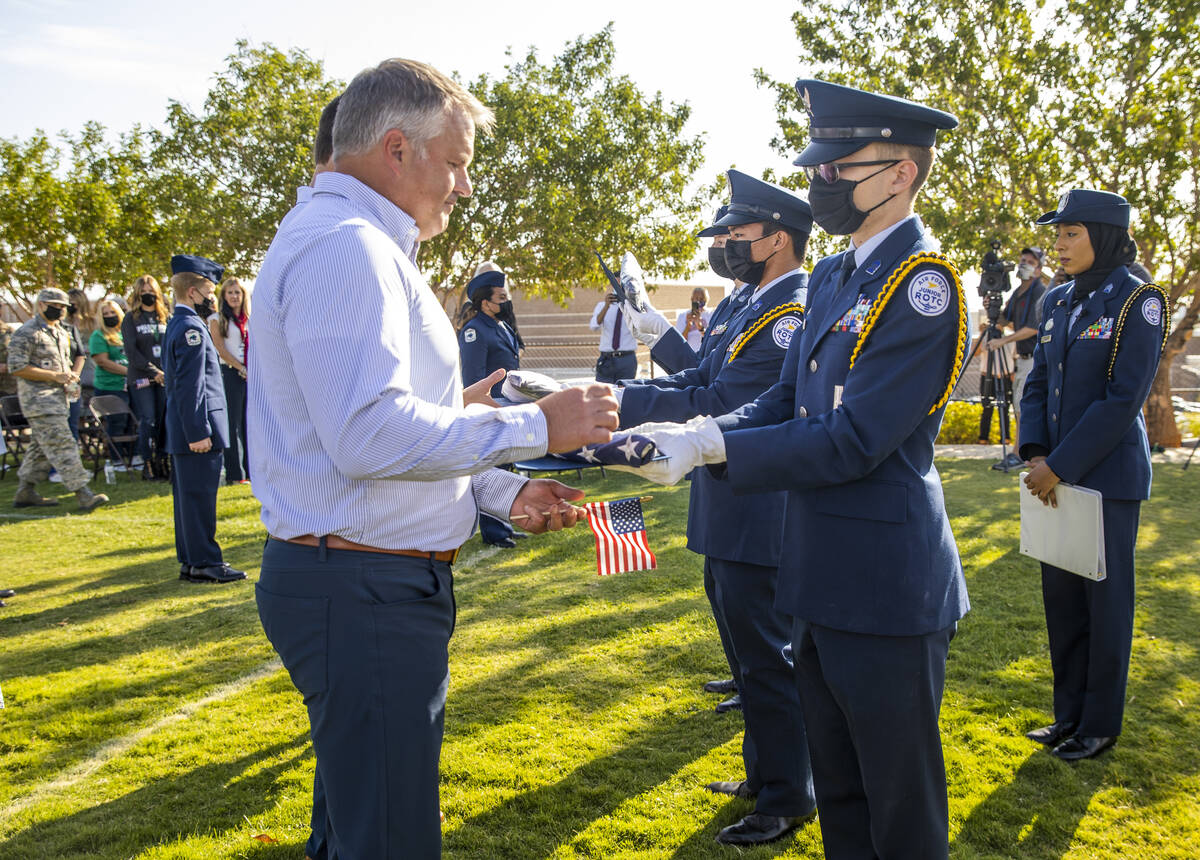 Scott Edwards, left, receives a ceremonial flag from Air Force JROTC cadet Gavin Birch along with other family members during a ceremony to honor the memory of Palo Verde High School teacher Barbara Edwards, who was killed in the 9/11 terrorist attacks, on Friday, Sept. 10, 2021, in Las Vegas. (L.E. Baskow/Las Vegas Review-Journal) @Left_Eye_Images 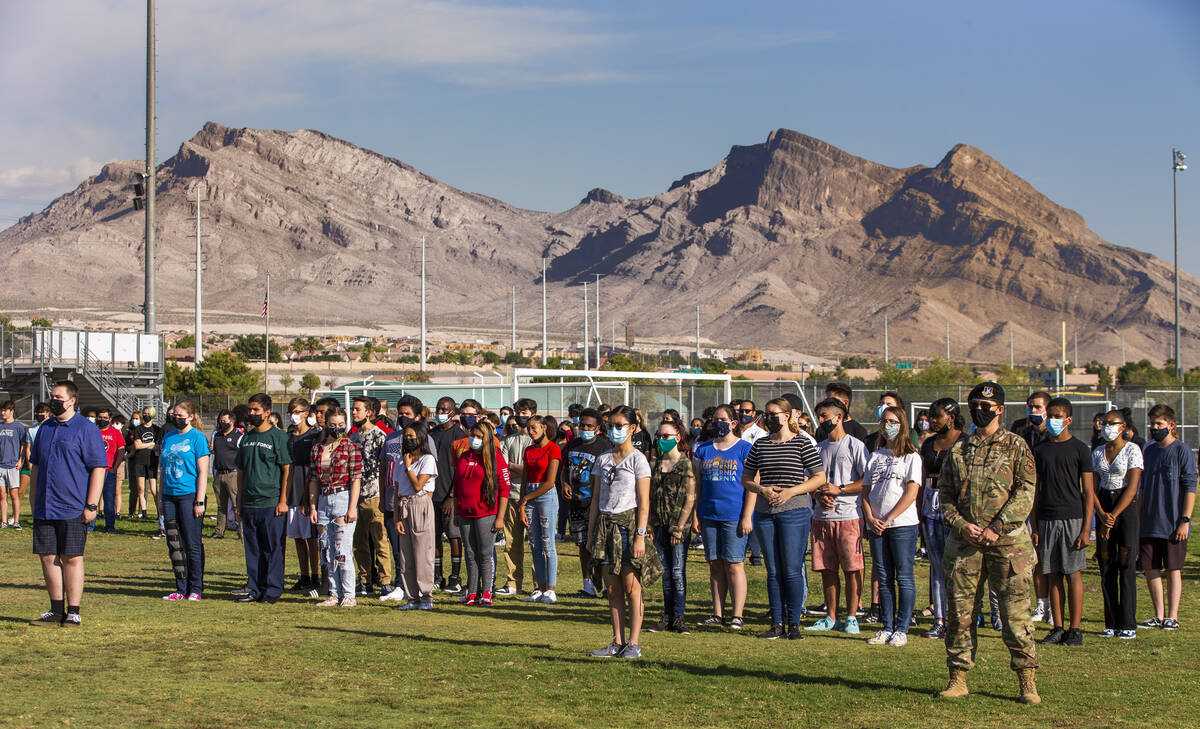 Students stand in honor during a ceremony to honor the memory of Palo Verde High School teacher Barbara Edwards, who was killed in the 9/11 terrorist attacks, on Friday, Sept. 10, 2021, in Las Vegas. (L.E. Baskow/Las Vegas Review-Journal) @Left_Eye_Images 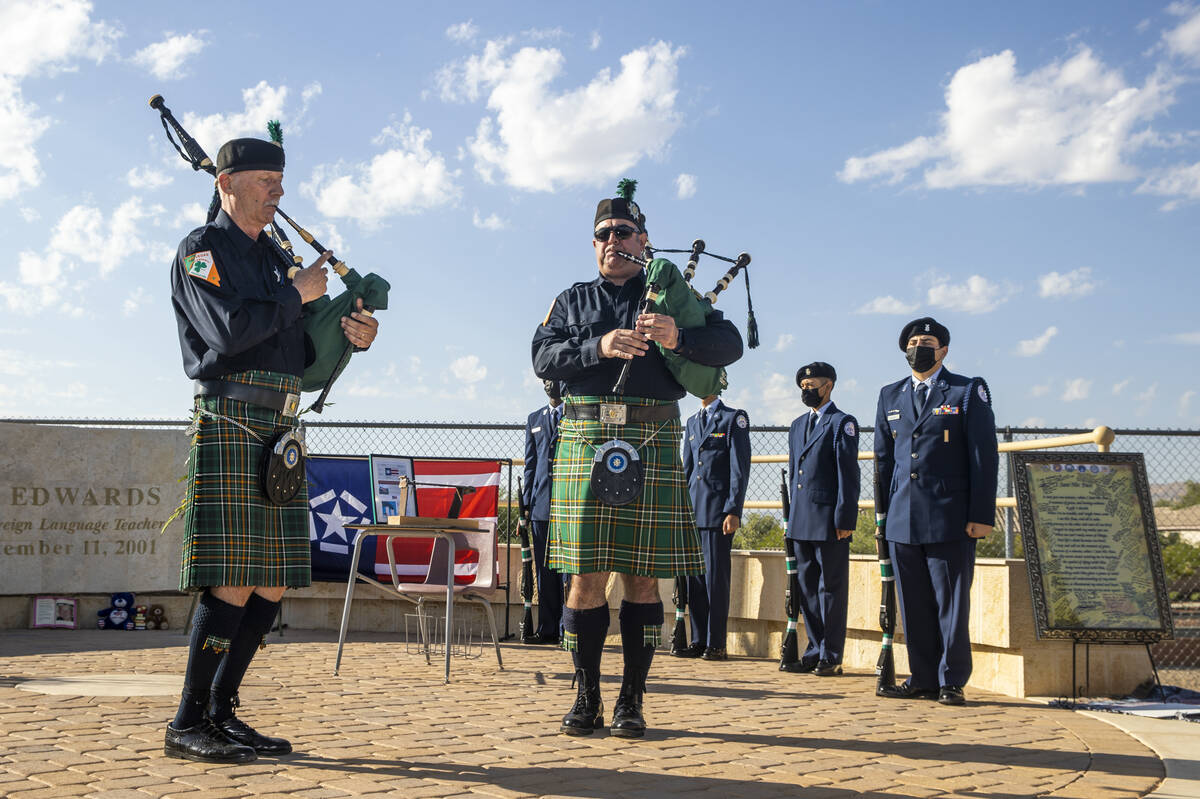 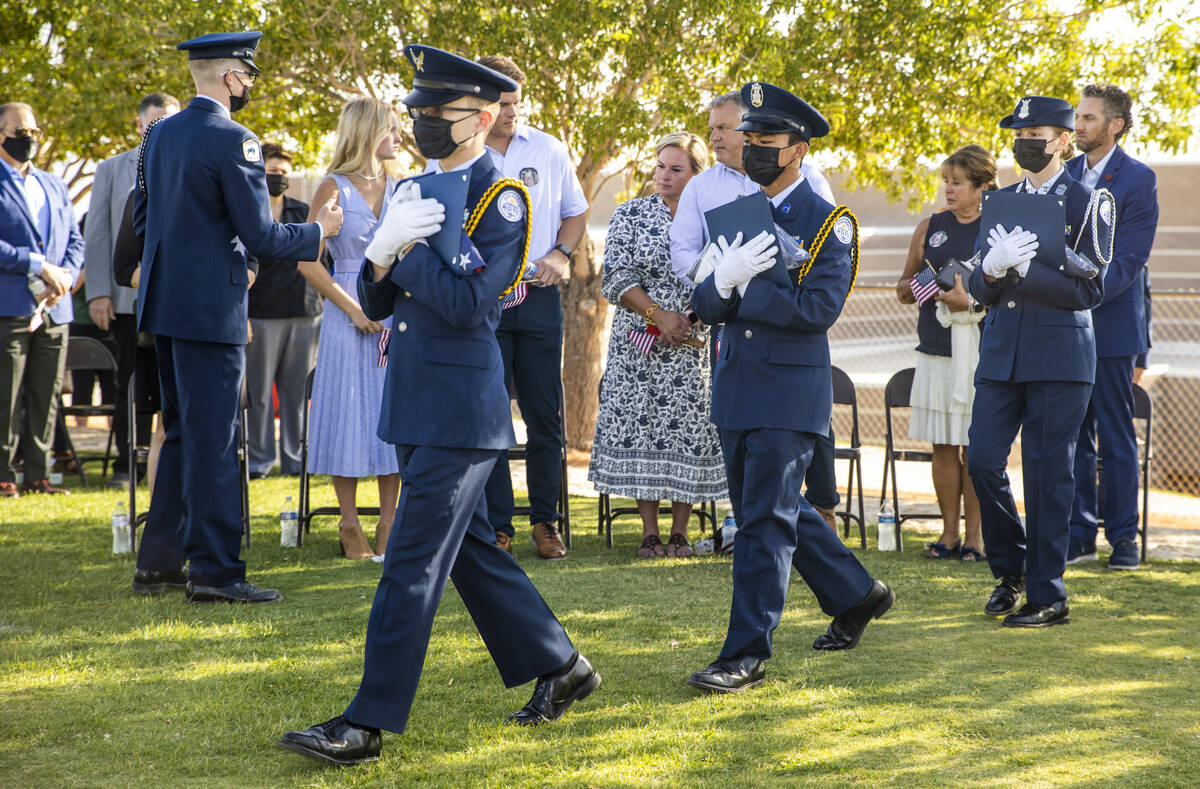 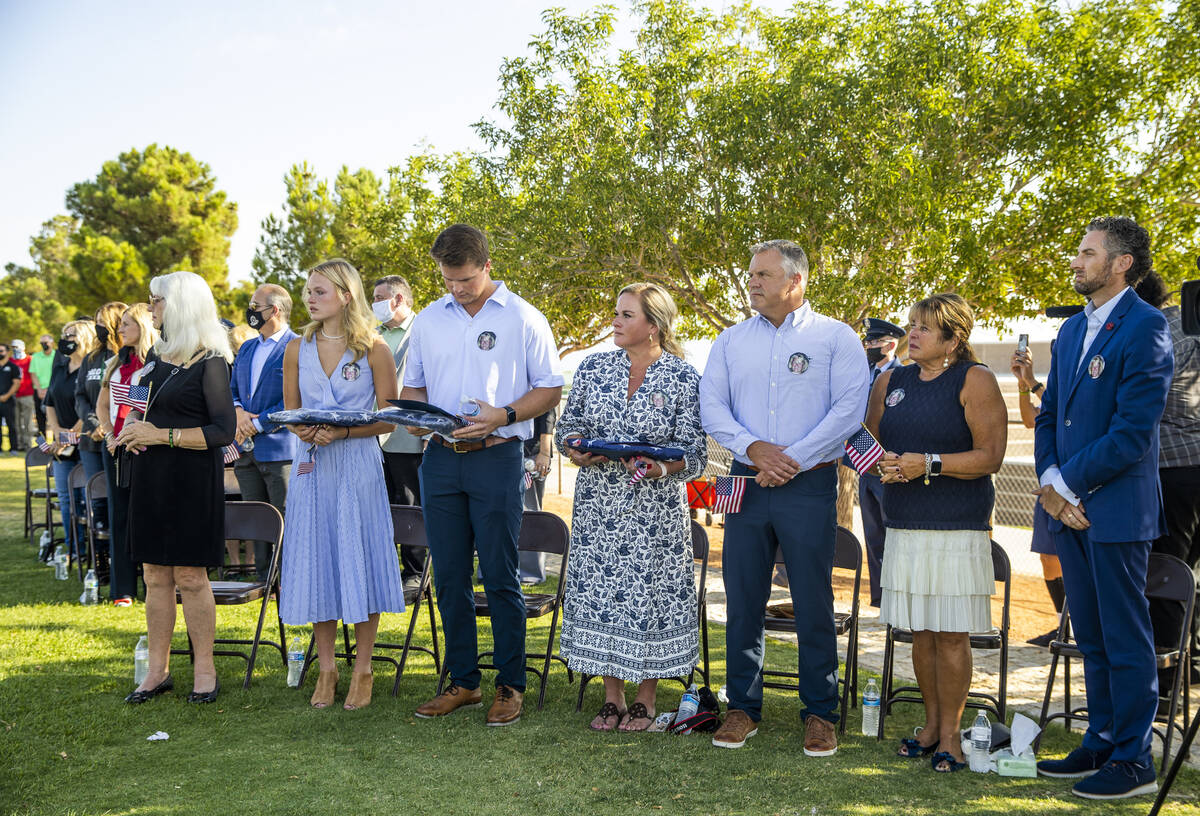 The son of a Las Vegas teacher killed in the 9/11 attacks knows she would have been honored by a Friday ceremony in her memory at Palo Verde High School in Summerlin.

More than 100 people gathered Friday morning at the Barbara Edwards Memorial on the soccer field of the school where the 58-year-old woman taught German and French. She was on American Airlines Flight 77 when it was hijacked and crashed into the Pentagon, killing all 64 people on board.

“My mother was a fun-loving, joyous person,” Scott Edwards said. “She always saw the good in people. She could always step away from a situation and see the God’s eye view of it, see the good in everything and everybody.”

Barbara Edwards was the only full-time Las Vegas resident killed in the terrorist attacks. Her sister, Jane Gollan, of Yuma, Arizona, reflected on her life during a recent phone interview.

“She cared about her students,” Gollan said. “She liked everybody. She was all about liking people and having fun. An extreme extrovert.”

Gollan and her sister were born in Germany, and the family moved to Michigan when Barbara was 10.

It was in Michigan where Barbara graduated from high school, then college, and married and had three children. After a divorce, she became a teacher in Indianapolis, then received a suggestion from her close friends, part-time Las Vegas residents Darlene “Dee” and Wilson “Bud” Flagg, to take a teaching job in Las Vegas.

In the weeks before her death, Barbara Edwards had suffered a broken arm in a car crash and was off from work. She used the time to attend a September wedding in Connecticut. She also traveled to New Jersey to visit her son Doug, then traveled to Virginia to spend some time with the Flaggs. The Flaggs also died on American Flight 77.

Gollan said she was notified of her sister’s death by their stepfather. Gollan, in turn, notified her sister’s three sons. She said the loss has been life-changing for all who knew and loved the woman.

“She had funerals in England and Indianapolis and Las Vegas and Grand Rapids (Michigan), because she had so many friends,” Gollan said.

On Friday, as Scott Edwards attended the ceremony in Las Vegas, his two older brothers, Doug and Mike, prepared to attend a ceremony for 9/11 victims at the Pentagon in Washington, D.C.

The nation’s tributes to the 2,977 lost in the terrorist attacks are important for Barbara Edwards’ family, her youngest son said.

“Just take some time to reflect for the people who passed and also for the men and women in uniform, the military, the firefighters, the police force,” he said.