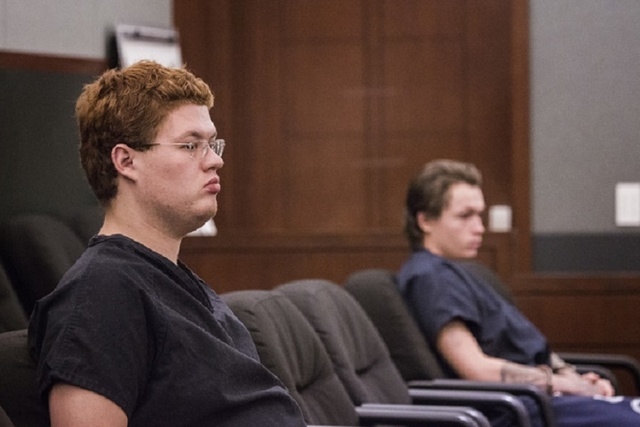 Defendants Derrick Andrews, left, and Erich Nowsch, appear in court at the Regional Justice Center on Thursday, May 21, 2014. Nowsch is accused in the Feb. 12 slaying of Tammy Meyers while Andrews is charged with driving the getaway car. (Jeff Scheid/Las Vegas Review-Journal) Follow Jeff Scheid on Twitter @jlscheid 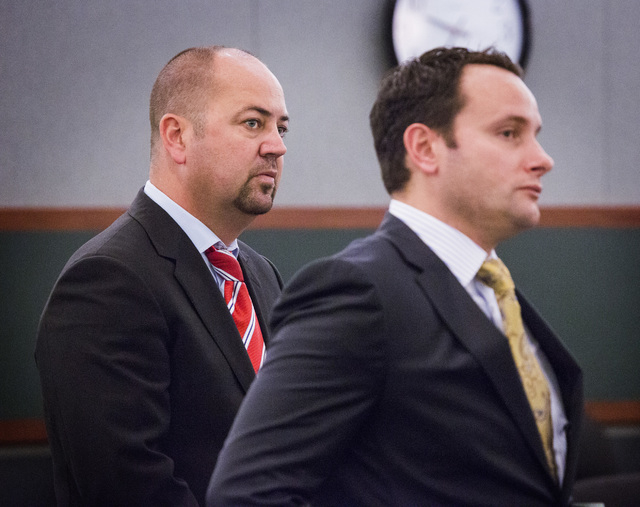 Defense attorneys Roy Nelson, left, and Josh Tomsheck appear at a hearing at the Regional Justice Center on Thursday, May 21, 2014. The two are new attorneys for Derrick Andrews, who is charged with driving the getaway car in the shooting death of Tammy Meyers on Feb. 12. (Jeff Scheid/Las Vegas Review-Journal) Follow Jeff Scheid on Twitter @jlscheid 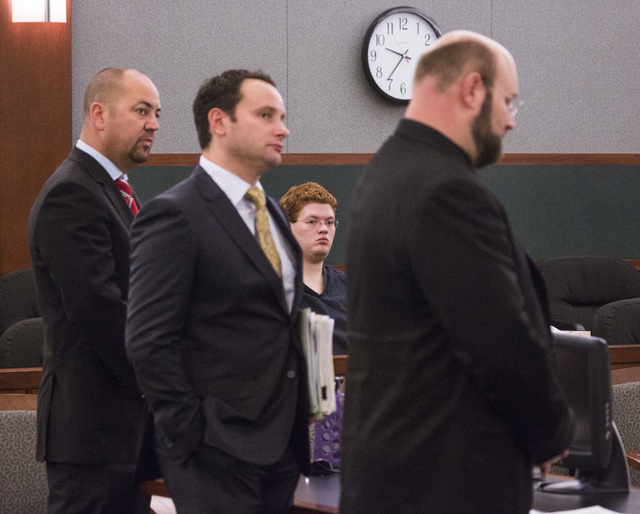 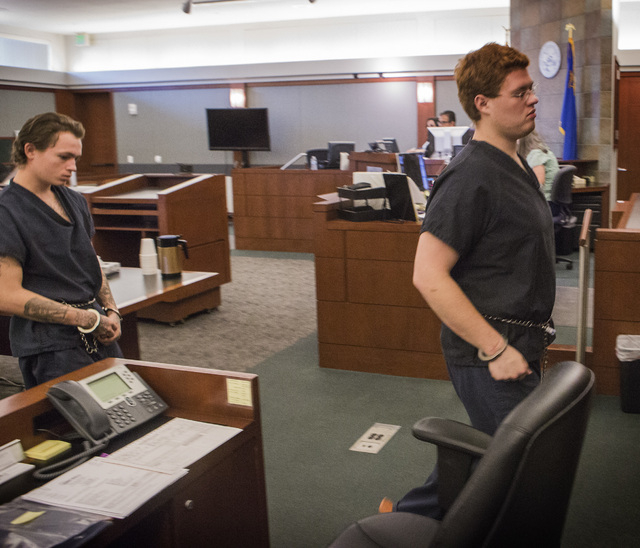 Defendants Erich Nowsch, left, and Derrick Andrews exit court after a hearing at the Regional Justice Center on Thursday, May 21,2014. Nowsch is accused in the Feb. 12 slaying of Tammy Meyers while Andrews is charged with driving the getaway car. (Jeff Scheid/Las Vegas Review-Journal) Follow Jeff Scheid on Twitter @jlscheid 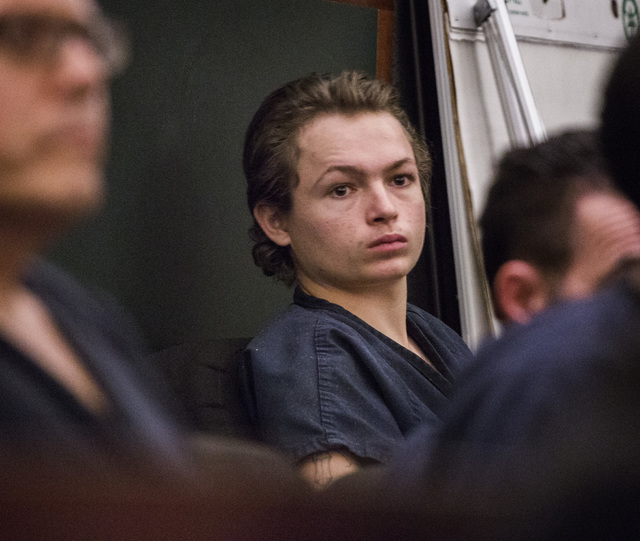 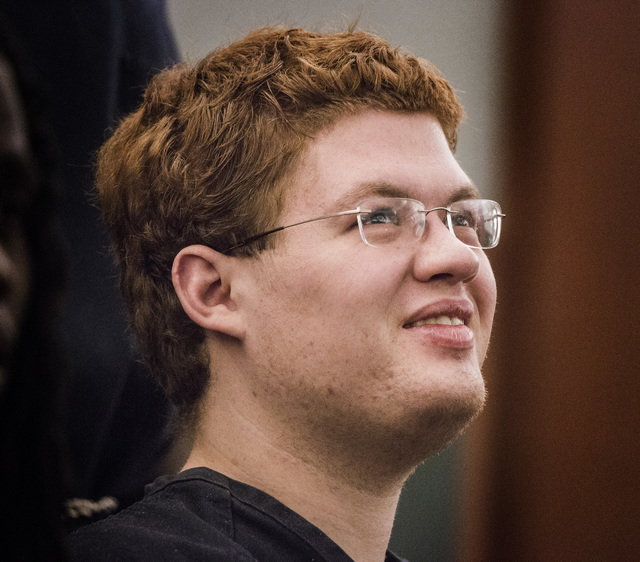 Defendant Derrick Andrews appears in court at the Regional Justice Center on Thursday, May 21, 2014. Erich Nowsch is accused in the Feb. 12 slaying of Tammy Meyers while Andrews is charged with driving the getaway car. (Jeff Scheid/Las Vegas Review-Journal) Follow Jeff Scheid on Twitter @jlscheid

Derrick Andrews, the alleged getaway driver in the slaying of 44-year-old mother of four Tammy Meyers, has hired new attorneys.

Defense lawyers Josh Tomsheck and Roy Nelson stepped in Thursday to represent Andrews, who is charged along with the suspected gunman, Erich Nowsch.

District Judge Michael Villani set two more court appearances for the defendants for later this month, when defense attorneys would argue that statements Nowsch and Andrews made to police should be thrown out.

Villani also suggested that a trial, originally set for next week, could happen in August.

Nowsch, 19, and Andrews, 26, have pleaded not guilty to charges of murder, attempted murder, conspiracy to commit murder, and discharge of a firearm from or within a structure or vehicle in connection with the Feb. 14 death of Meyers.

Prosecutors said Andrews was behind the wheel of a silver 2000 Audi A6 from which Nowsch fired 24 shots, striking Meyers in the head Feb. 12 while she stood in the cul-de-sac in front of her northwest valley home. She died two days later.

Both men are being held at the Clark County Detention Center without bail.

The shootout was initially attributed to “road rage,” but a prosecutor said the deadly chain of events started when Meyers saw Andrews’ car and mistakenly thought it was one that had earlier bumped hers.

Nowsch told police he was in a park across the street from Johnson Junior High School when he noticed a green car that seemed to be following him. He thought the car was carrying people who had threatened him and his family.

Nowsch called friends for help, according to police, then climbed into the Audi.

Meyers was in a green Buick Park Avenue with her son, Brandon Meyers. She approached from behind and followed as Andrews drove away, prosecutor David Stanton said.

Nowsch, 19, was in the passenger seat of Andrews’ car with a Ruger .45-caliber handgun. He fired at least five shots at the Buick before the Meyers drove away, authorities said. Andrews and Nowsch then gave chase.

Meyers ultimately stopped her car outside her home, where she was caught in a hail of gunfire. Brandon Meyers returned fire with his own pistol but hit no one.

Prosecutors said Nowsch held a knife to the neck of a 13-year-old boy on Feb. 15 near Alta Drive and Anatolia Lane.

On Thursday, District Judge Jennifer Togliatti ordered prosecutors to turn over phone records of the juveniles who were at the scene to Nowsch’s lawyer, Augustus Claus.