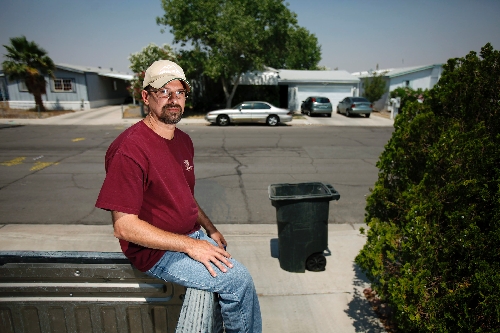 After a lien was placed on his home for a late $43 trash bill, Lyle Lyddon took exception to a Clark County ordinance forcing residents to pay for garbage pickup as long as they have water, electricity or gas. The ordinance was enacted in 1993 to discourage desert dumping.

But Lyddon, who paid the late bill and an extra $120 to get rid of the lien, argues he is forced to pay for a service he cannot suspend when his union carpenter job takes him out of state for work. It’s his fourth lien over trash service in four years.

The 45-year-old has reached out to state and local lawmakers in hopes of changing the policy but has had little success.

"I understand the fact that if people can just cancel their trash service they would start dumping out in the desert," Lyddon said. "But there shouldn’t be an ordinance that if you have a water bill you have to have a trash bill. There has to be some other way they can do this."

Republic Services secured an exclusive franchise agreement with the county years ago, making it the only one in the area for residential solid waste collection. Couple that with the ordinance, and it means the government mandates its residents to become Republic Services customers, essentially creating a monopoly.

"I can’t choose who I want to pick up my trash," Lyddon said. "The government is in cahoots with them forcing us to pay for something we are not using."

The only way around the county law is to cancel the utilities, something Lyddon won’t do.

"I don’t want my house to get robbed, so my alarm has to keep going," he said. "My trees have to be watered."

It’s unclear what other options might be available. Las Vegas, North Las Vegas and Henderson all have similar ordinances. State law also allows for those governments to enter into franchise agreements.

And the deal county commissioners made in 1996 with Republic Services was amended a few years back. It’s good through 2035.

Commissioner Steve Sisolak said he’s received similar complaints from snowbirds with vacation homes who insist they don’t generate trash in the off­season but are still charged for garbage services.

"It is what it is," Sisolak said. "Whether that’s right or not, that’s not the point. Some commissioners in the past gave them that authority. Until that’s up we can’t change it because it’s a contractual agreement."

Bob Coyle, vice president of Republic Services, said it would be impossible to keep track of customers if service could be suspended. The company collects trash from 520,000 homes valleywide each week.

"How does our driver know who is suspended and who’s not," Coyle said. "Someone could call and cancel service but keep putting trash out with their next-door neighbors. They’d be getting service and not paying for it."

But Coyle said the company uses common sense when it comes to billing customers.

"We’re fairly certain that if someone has turned off electricity or water, there’s no one living in the house," Coyle said. "If they print out a final bill and send it to us, we’ll take them out of billing."

After 45 days past due, a reminder is mailed out. A second one is sent at 90 days, and at 105 days past due, the customer will receive a letter from the company’s collection agency warning that a lien could be placed on the home. At 120 days, the lien process begins, Coyle said.

When the economy tanked, Republic Services got aggressive with its lien procedures, Coyle added. Lien totals in mid-2007 were around $2 million. The outstanding balance now is about $11 million.