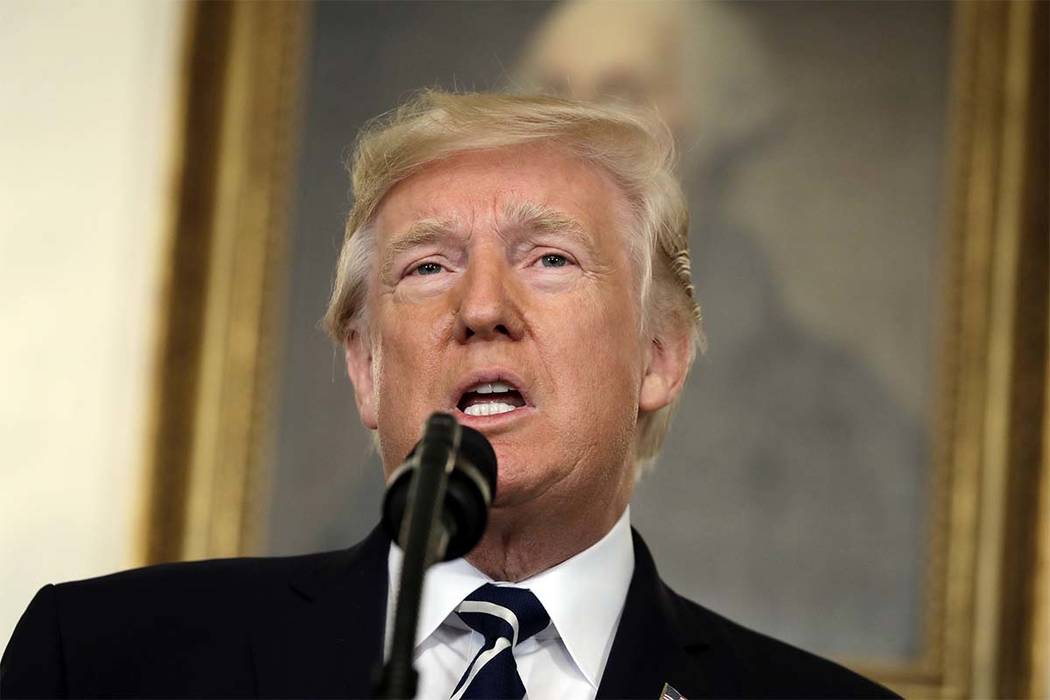 President Donald Trump makes a statement about the mass shooting in Las Vegas, Monday, Oct. 2, 2017 at the White House in Washington. (Evan Vucci/AP)

WASHINGTON — President Donald Trump will visit Las Vegas on Wednesday to meet with families of victims of the deadly mass shooting and thank police and first responders for the countless lives they saved.

When Air Force One touches down in Las Vegas Wednesday morning, Trump will spend his third day addressing U.S. catastrophes.

Monday he addressed the nation to share a message of unity after the Las Vegas strip shootings that left 59 dead. Tuesday the president and first lady visited Puerto Rico for a briefing on Hurricane Maria relief efforts, thank relief workers and meet with residents whose lives have been interrupted by the storm. Wednesday’s visit in Las Vegas will check the same boxes.

After moments like this, after innocent Americans have been struck down gratuitously, presidents find themselves in the role of consoler-in-chief, a leader who shares the country’s pain but also sees a way forward.

Such tragedies also can present a president with an opportunity to unify the country or to consolidate like-minded individuals behind a political position.

In 1995, after domestic terrorist Timothy McVeigh killed 168 when he bombed a federal building in Oklahoma City, President Bill Clinton delivered a eulogy that tied the bombing to Republican anti-government rhetoric.

“They spread hate,” Clinton said, without naming any names. “They leave the impression that, by their very words, that violence is acceptable.” The speech helped energize his then flagging presidency.

In 2001, days after the 9/11 terrorist attack, President George W. Bush united the country when he spoke extemporaneously in the ruins of the twin towers. Speaking with a bullhorn, Bush began his remarks softly. When a first responder said he could not hear Bush, the president replied, “I can hear you! The rest of the world hears you! And the people who knocked these buildings down will hear all of us soon.” The crowd chanted “USA! USA!”

At a memorial service for the 27 victims of the Sandy Hook Elementary School shootings in 2012, President Barack Obama declared, “we just changed. We will be told that the causes of such violence are complex, and that is true. No single law – no set of laws – can eliminate evil from the world, or prevent every senseless act of violence in our society. But that can’t be an excuse for inaction.”

At the time Obama’s rhetoric moved Trump, then a private citizen, to tweet, “President Obama spoke for me and every American in his remarks in #Newton Connecticut.”

The White House has indicated that Trump will avoid discussing gun violence issues. At a Monday press briefing, Press Secretary Sarah Sanders told reporters it would be “premature for us to discuss policy when we don’t fully know all of the facts or what took place last night.”

When Trump addressed the nation that morning, he hit an apolitical note as he stated, “Hundreds of our fellow citizens are now mourning the sudden loss of a loved one, a parent, a child, a brother or sister. We cannot fathom their pain. We cannot imagine their loss. To the families of the victims, we are praying for you and we are here for you.”

“I think the way he framed this was the perfect touch and feel that people like to see in their presidents,” observed GOP kingmaker Sig Rogich of Las Vegas. At times like this, he said, voters want presidents who “offer a shoulder they can put a head on.”

“He shouldn’t say a whole lot,” offered Ken Khachigian, former speechwriter for President Ronald Reagan. “The best thing he can do is put on his comfort hat and just go around and hold hands and listen.”

“I thought he struck the right tone for once,” said Democratic strategist and CNN contributor Maria Cardona. Trump stuck to the teleprompter and “said all the right things.”

Cardona has a very different view of Trump’s Tuesday trek to Puerto Rico.

Controversy preceded and followed that trip after Trump spent days in a Twitter war with San Juan Mayor Carmen Yulin Cruz. The feud heated up after Cruz berated a Trump official for praising the federal government’s relief efforts in the U.S. territory. Cruz told CNN, “This is a ‘people are dying’ story.”

Trump responded on Twitter by faulting Cruz for not pitching in relief efforts. He also argued that Puerto Ricans “want everything to be done for them when it should be a community effort.”

Then followed a weekend of dueling commentary. FEMA administrator Brock Long criticized Cruz for not checking in with the FEMA field office. Trump critics charged that the president did not recognize Puerto Ricans as American as Texans and Floridians.

Trump probably didn’t help himself Tuesday when he quipped that the cost of Puerto Rico’s relief efforts likely will put “our budget out of whack.”

“The only thing he focuses on are all the great pats on the back that he’s gotten from other officials,” said Cardona, while Trump “does not acknowledge the challenging work ahead.”

“We are used to having hurricanes, but we never before got a direct communication with the federal agencies with the local government working those things out,” said Puerto Rican Congresswoman Jennifer Gonzalez-Colon. “And I think that’s a 100 percent improvement.”

There have been no such feuds between Las Vegas officials and Trump. To the contrary, Press Secretary Sarah Sanders was near tears Monday as she talked about the victims.

Las Vegas offers Trump familiar turf – there is a high-rise Trump Hotel near the Strip – clouded by an awful mystery.

Khachigian observed that the country has seen so many disasters, “We just get inundated with these events. But this was really horrific. You’re trying to sort out, this guy. It would be easier if they could figure out a motive.”