Dozens gathered throughout the day Wednesday at a Las Vegas intersection to remember two teenage girls who were fatally struck by a suspected drunken driver Monday night.

Nelly Amaya-Ramirez and Citlali Mora, both 16, were hit by an SUV at the intersection of Maryland Parkway and Katie Avenue. The driver, 38-year-old Ebone Whitaker, was arrested on suspicion of driving while intoxicated, police said.

More than a dozen people gathered Wednesday evening at a vigil sponsored by Zero Fatalities and expressed frustration about the girls’ deaths.

“It’s time we quit allowing people we know who have no business behind the wheel drive and take a life,” Erin Breen, director of UNLV’s Vulnerable Road Users Project, said Wednesday evening. “Enough is enough.”

Police said Whitaker was driving south on Maryland when her SUV veered to the right, went over the curb and struck a traffic sign before continuing south and hitting the two girls as they were crossing Katie in a marked crosswalk.

One of the teens was forced into the road and ended up underneath another vehicle. The second teen was thrown into a nearby McDonald’s drive-thru lane, police said. Whitaker’s vehicle continued on, striking a tree and a traffic pole before stopping.

Breen said the city is on track to have dozens more traffic fatalities compared to last year.

“Who knows what these two young girls would have accomplished,” she said. “When a young person dies, every student who’s ever gone to school with them takes that to heart.”

Police protecting the intersection during the vigil said people had been lighting candles for the girls all day.

Speaking to the Review-Journal earlier Wednesday, Nelson Reyes, 49, Amaya-Ramirez’s stepdad of 13 years, said the girls had just left Boulevard Mall and were going to grab a bite at McDonald’s. Amaya-Ramirez had just texted her mom that she was on her way home.

Amaya-Ramirez was transported to Sunrise Hospital and Medical Center, where Reyes and his wife, Ada Ramirez, identified the girl.

“The doctor told my wife that they would do everything possible to save her, but it was very difficult because she was in such bad shape after the accident,” Reyes said, translated from Spanish. “They asked if we wanted them to keep her on life support and keep trying. My wife said to let the girl be in peace, that it was enough.”

Reyes described Amaya-Ramirez as the apple of his eye, even though he wasn’t her biological father, seeing her grow since she was 3.

He said he hopes law enforcement will crack down on impaired driving in the valley and that justice will prevail in court. 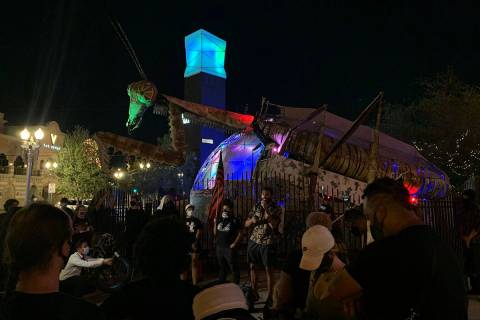 A protest calling for justice in the shooting death of Breonna Taylor was taking Wednesday night in downtown Las Vegas.

A 46-year-old man was killed Tuesday evening in a two-vehicle collision near McCarran International Airport.