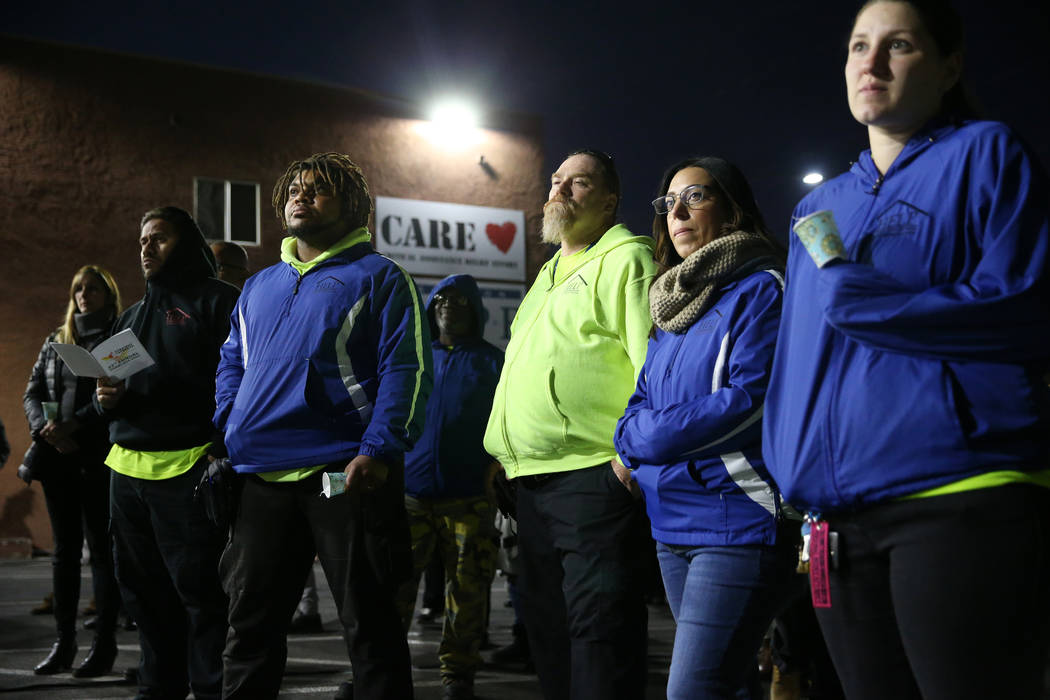 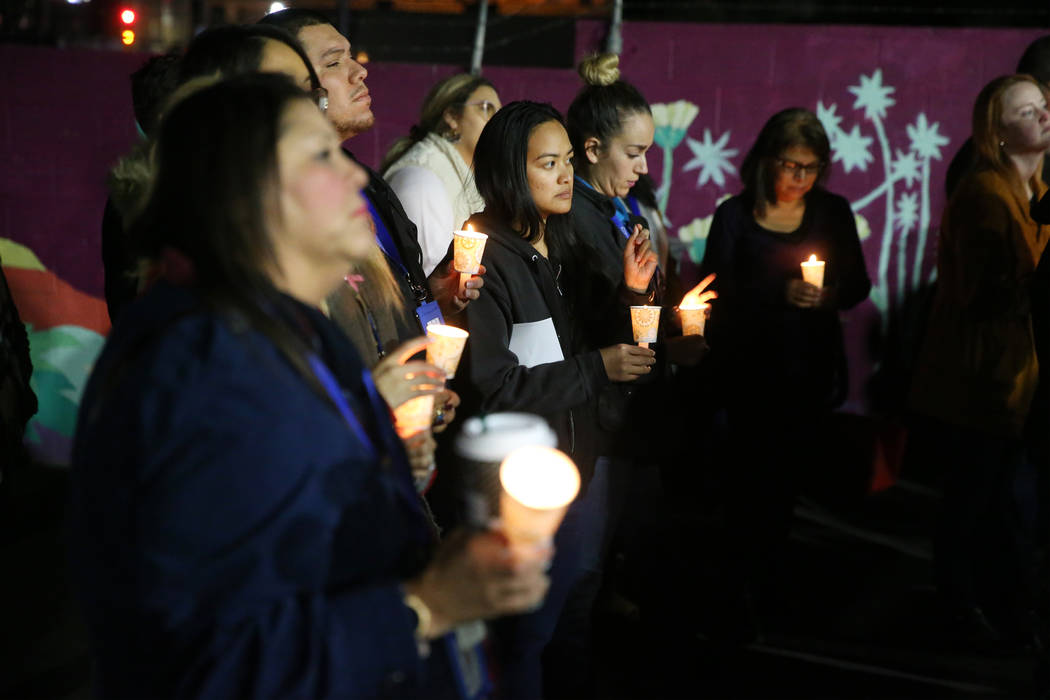 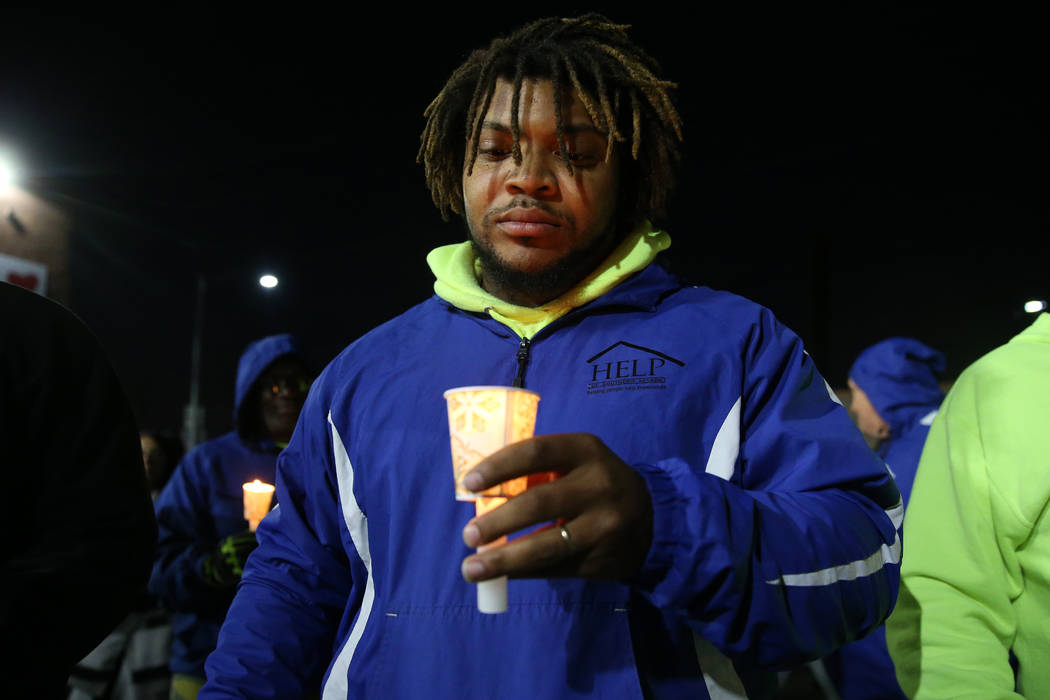 Scott Richardson, worker for HELP of Southern Nevada, participates during a candlelight vigil to memorialize the homeless people of Las Vegas who died in the last year, at the CARE Complex in Las Vegas, Thursday, Dec. 12, 2019. (Erik Verduzco / Las Vegas Review-Journal) @Erik_Verduzco 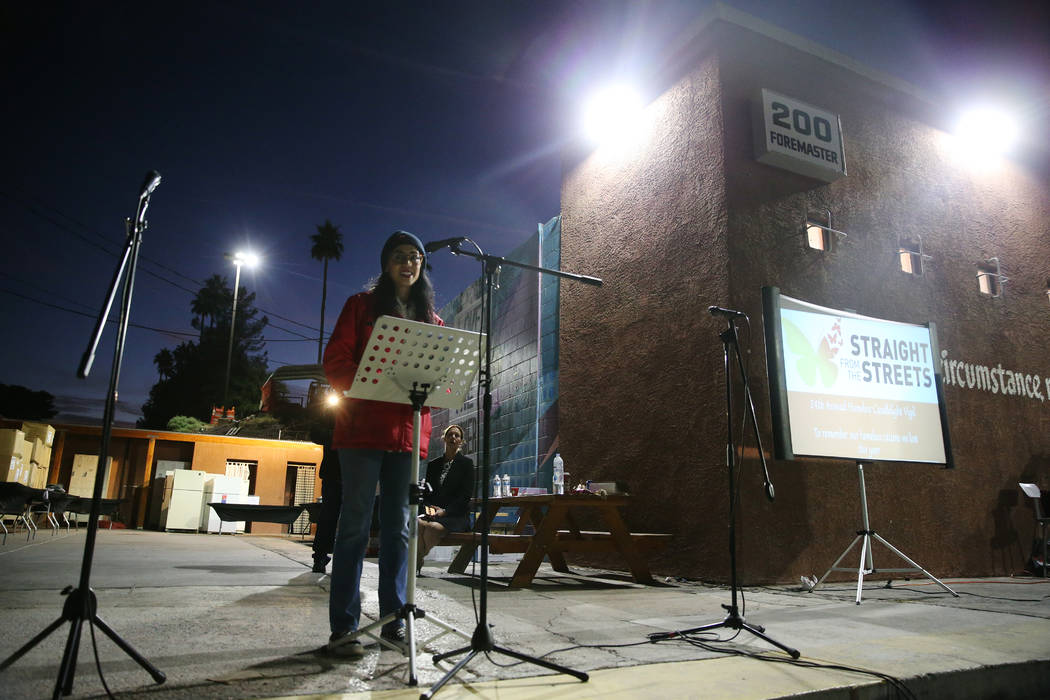 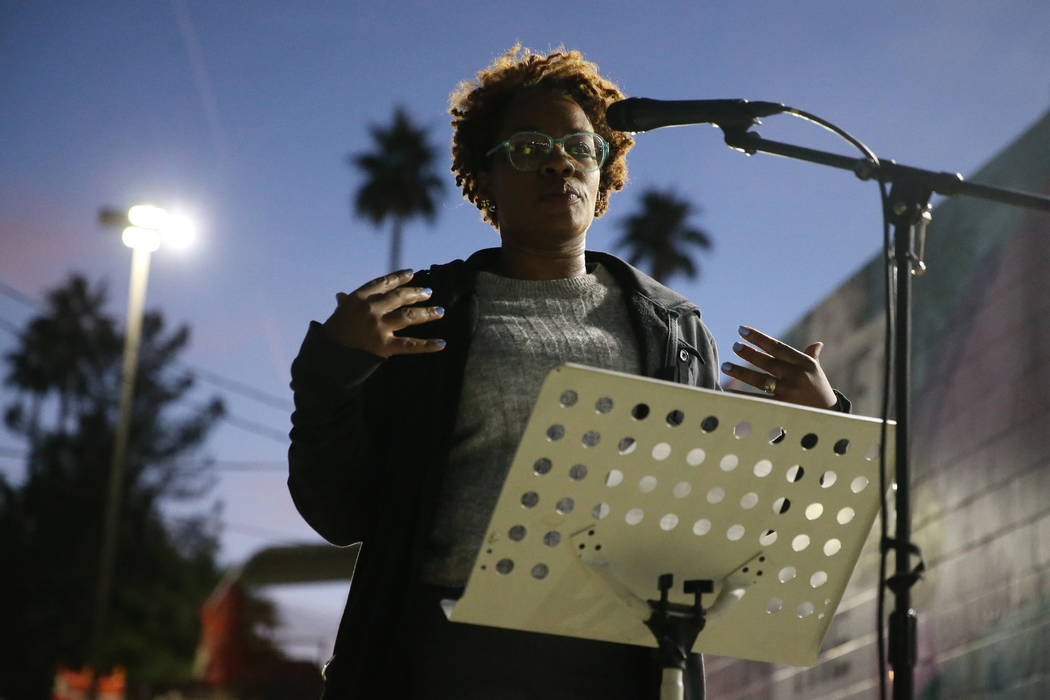 At least once every four days in Clark County, a homeless person dies.

Of those who died this year, 37 percent died from opioid use — a jump from last year’s number.

Some were killed. Others had heart trouble. Some succumbed to the elements.

On Thursday afternoon, each of their names was recited during a candlelight vigil at the CARE Complex on Foremaster Lane.

During the vigil, the homeless received hygiene kits and free haircuts. As some waited in line for a bed at Catholic Charities of Southern Nevada across the street, one man asked Thomas “Chicago” Randle-El what the event was for.

“This is for the people who died without families,” he said.

Randle-El founded Straight From the Streets, the nonprofit that hosted the vigil, in 2001 with his late wife, longtime homeless advocate Linda Lera Randle-El.

On the 24th annual vigil, Randle-El was pleased to see that at least deaths were down. He attributed it to more Nevadans being eligible for Medicaid under the Affordable Care Act.

“That means the the community is coming together to help the less fortunate. That’s what I really think,” he said. “We’re going to continue to fight the good fight.”

This year’s Southern Nevada homeless census counted 5,503 in shelters and on the streets. An estimated 14,114 people will experience homelessness at some point this year.

Two of this year’s deaths happened in March, within days and blocks of one other. One, when an unidentified homeless man known as Nick was struck by a white pickup as he crossed the street. Another was beaten to death behind the Super Pawn on Las Vegas Boulevard North, 23-year-old Anthony Giovanni Zambrotto.

“It’s not normal that people are dying on our streets because they don’t have a safe place to call home,” Paulsen said in a speech as a crowd held up candles.

“And that will never be OK.”

Paulsen criticized a controversial ordinance passed by the City Council last month making it a misdemeanor for people to camp or sleep in public areas downtown and in residential areas if there are beds free at established homeless shelters.

Under the new ordinance, violators could be charged with a misdemeanor crime, punishable by up to six months in jail and/or a $1,000 fine.

Las Vegas policymakers also might expand a ban on camping and sleeping in public to include hours when public sidewalks are being cleaned.

Former city judge Heidi Almase, who started the first mental health court and presided over adult drug court, emphasized the importance of treatment for those on the street and the consequences of being dragged through the criminal justice system.

“You can’t arrest it out of people; it just doesn’t work. If they are arrested, they’re brought into the criminal justice system and then there’s a cascade of consequences that happen,” she said, including inhibiting the ability to get social services.

“We must speak on behalf of those whose voices are often too low to be heard.”

Another speaker, Merideth Spriggs, who heads the nonprofit Caridad, shared her story of homelessness, which began more than 10 years ago in San Diego.

Six years after graduating from a master’s program, she had been living in her car and working two jobs, sneaking into showers at the beach and washing her clothes in a sink. She said she lost her car after unpaid parking tickets and tried to end her life.

“But for the grace of God I would not be standing here, because being homeless is hell, and anybody that tells you that homeless want to be homeless, they’re not telling you the truth,” she said.

After the vigil, Nick Lerma, 39, who usually stays next door at the city’s Courtyard Homeless Resource Center, sat on the outskirts, in his wheelchair. Years ago, he lost both legs to a rare bone infection called osteomyelitis.

He said he spent three periods of time this month in a hospital, afraid his untreated condition while living on the streets might cause him death.

“It scares me. There are people that are dying, having heart attacks, and this weather could be a factor,” he said. “I knew some of these people. I didn’t know their names.”