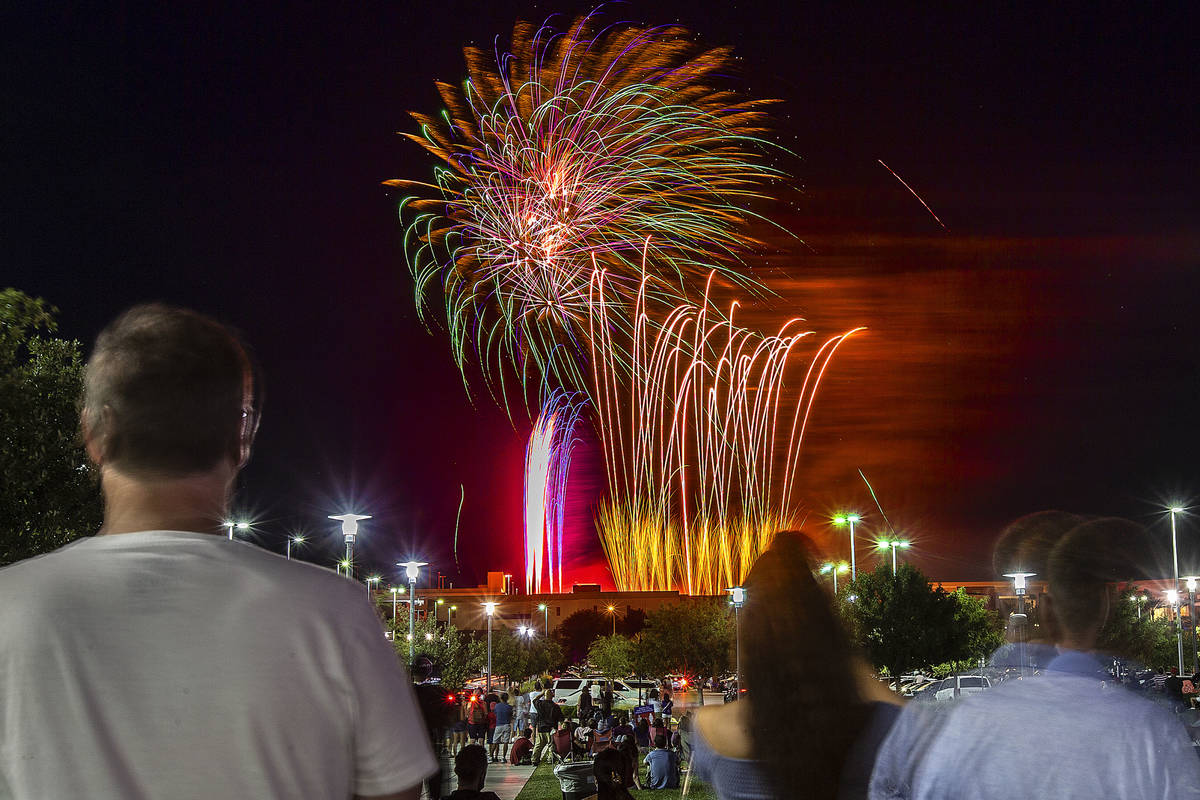 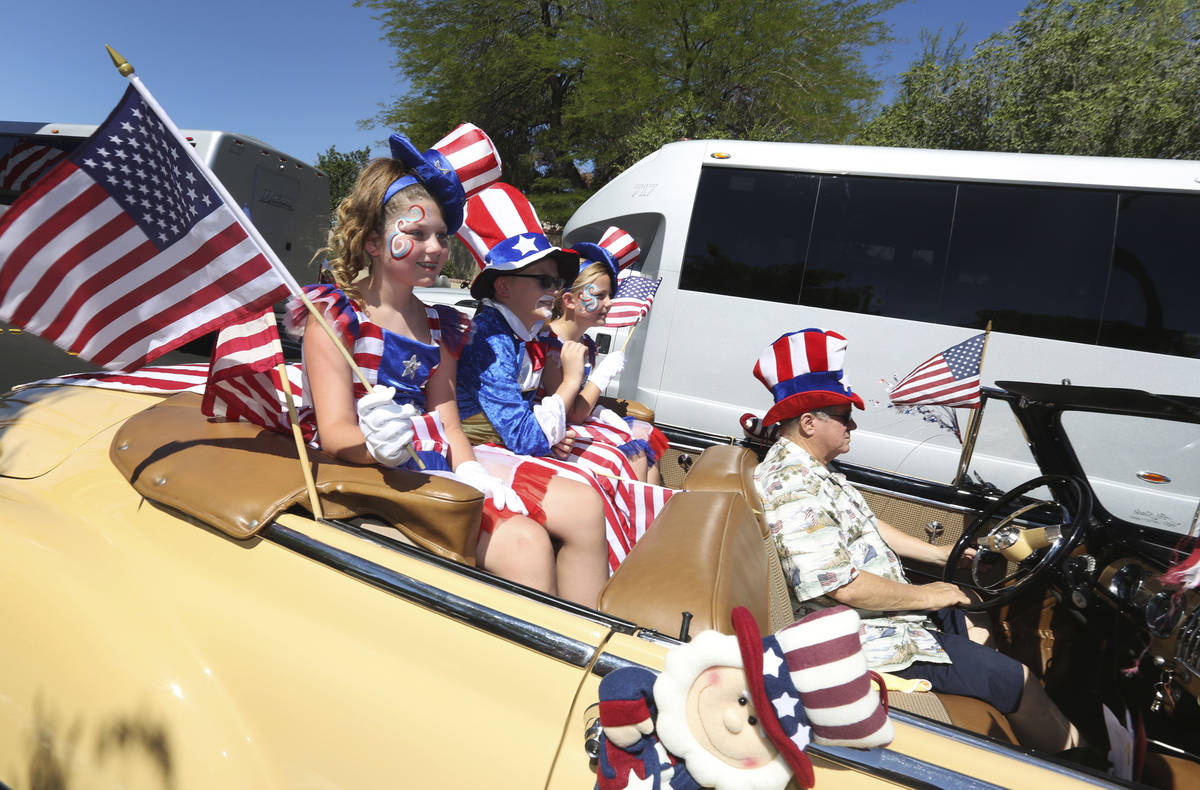 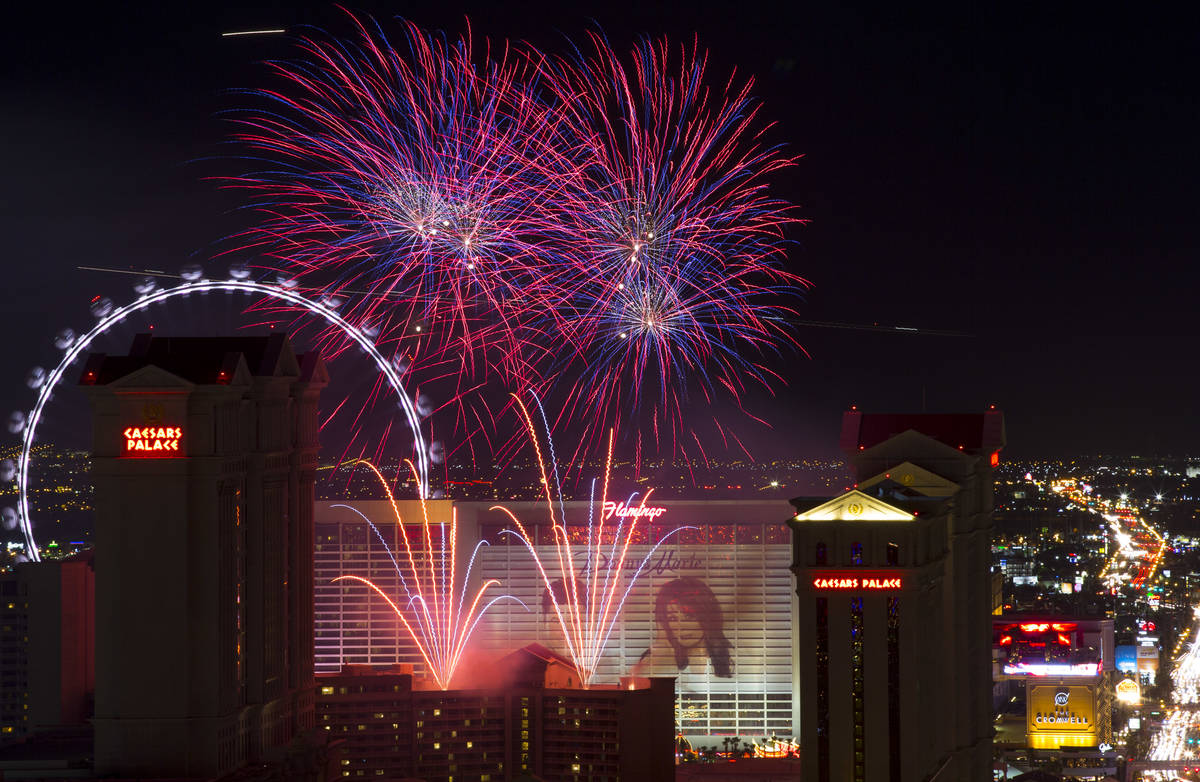 A fireworks show goes off at Caesars Palace on The Strip to kick off a week-long of Fourth of July festivities around the valley as seen from APEX Social Club atop the Palms in Las Vegas, Saturday, June 30, 2018. (Las Vegas Review-Journal) 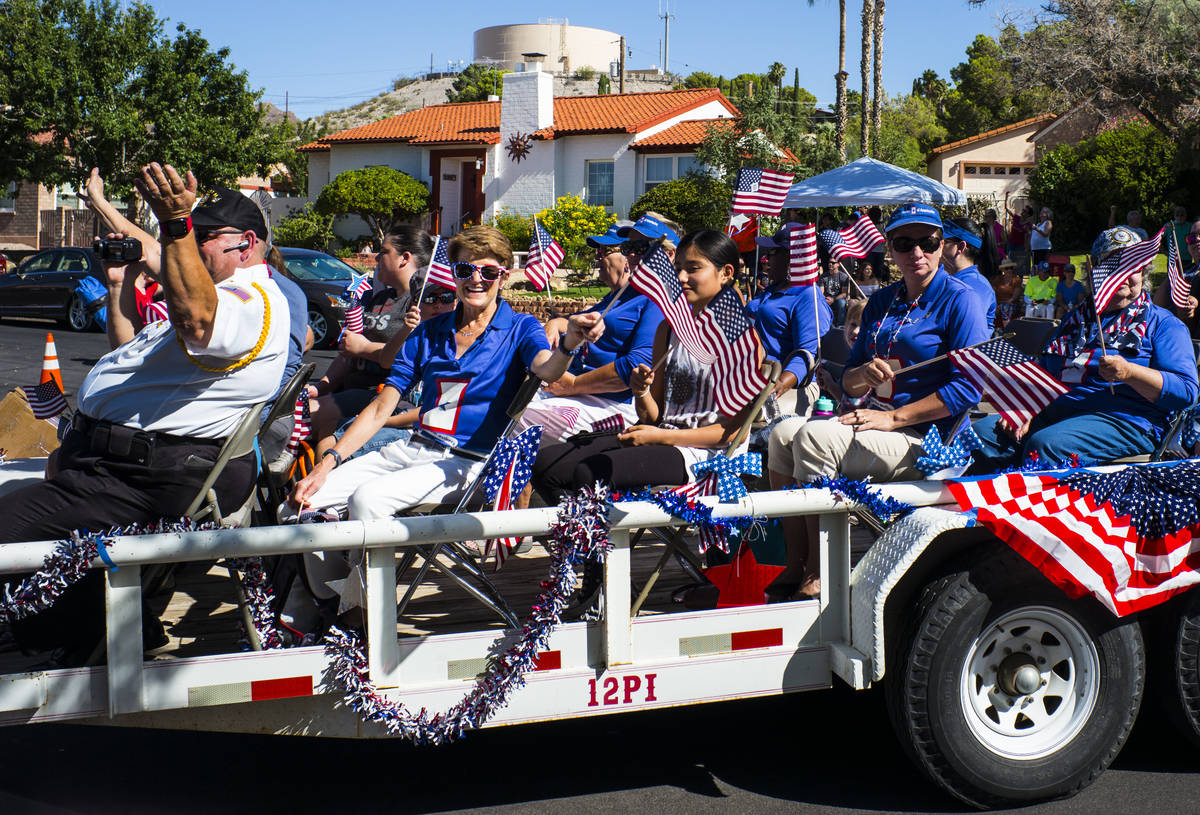 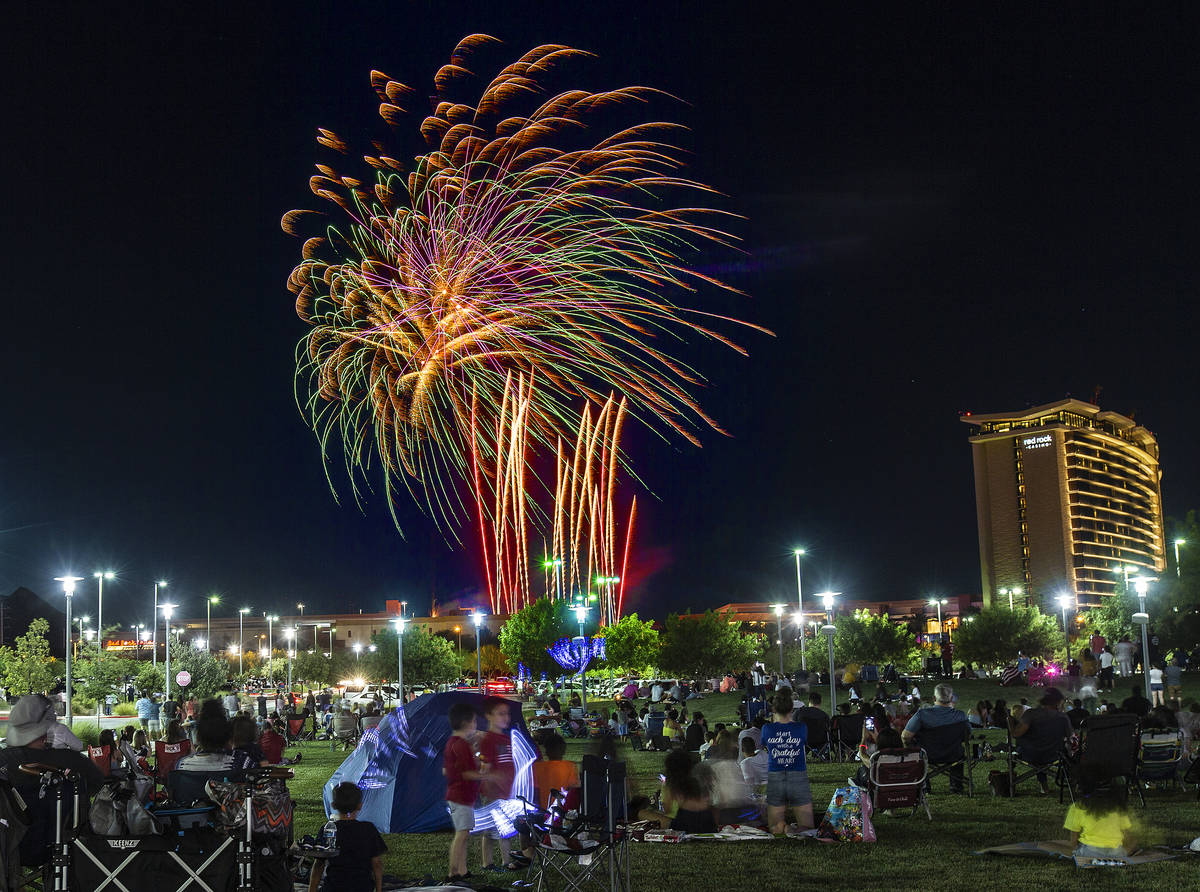 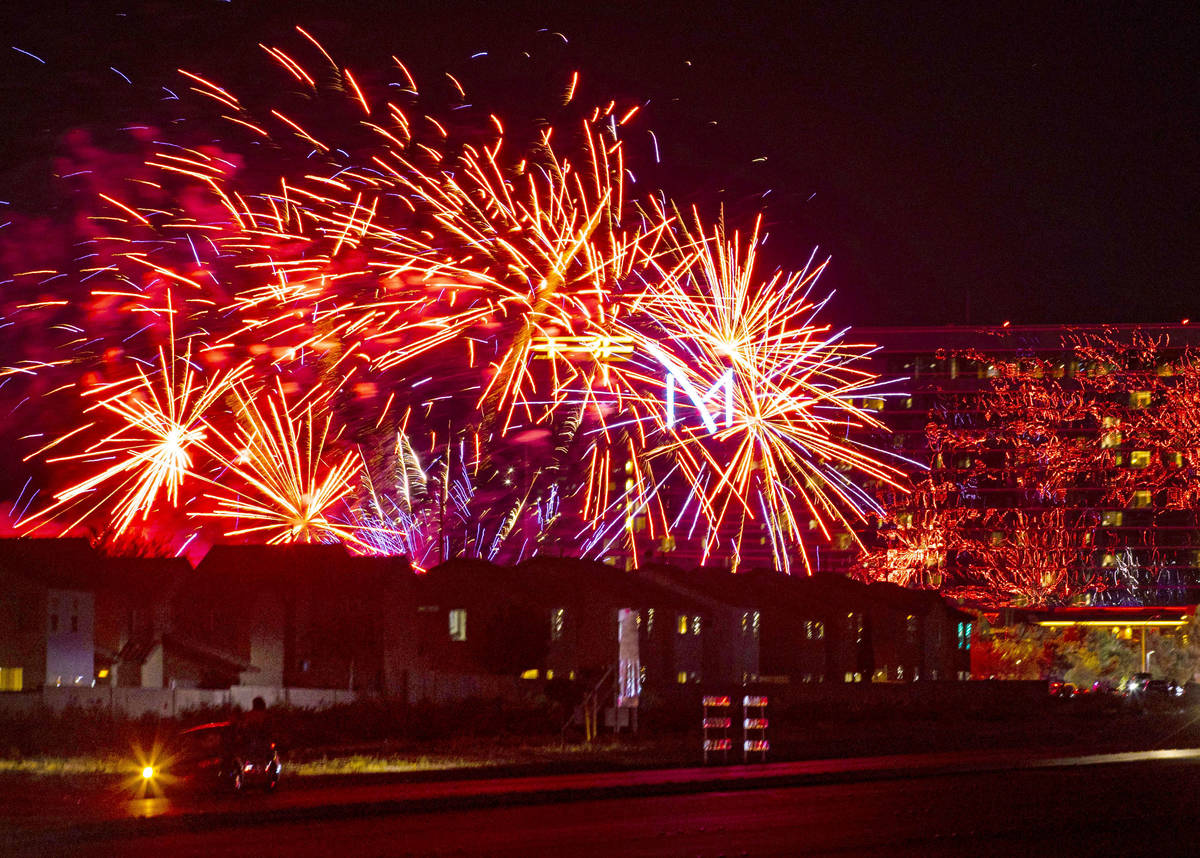 Fireworks shows and events will celebrate the Fourth of July around the Las Vegas Valley. Some events returning this year include the Night of Fire at Las Vegas Motor Speedway and Boulder City’s Damboree. Special anniversary fireworks shows for Station Casinos and the Plaza are also planned for the holiday weekend.

The 73rd annual Damboree will begin with the Rotary pancake breakfast at 7 a.m. July 3 at Bicentennial Park, 1100 Colorado St. At 9 a.m., the Boulder City Veteran’s Flying Group will perform a flyover and the parade will get underway. The parade route will begin at Colorado Street, travel down Nevada Highway to Fifth Street and end at Broadbent Memorial Park (Avenue B and Sixth Street). On July 4, Veterans Memorial Park will host live music, activities, food trucks and more, starting at 4 p.m. at 1650 Buchanan Blvd. Fireworks will launch at 9 p.m. Parking is $10. Admission is free. bcnv.org/Damboree

Cowabunga Bay will present fireworks shows at 8:45 p.m. July 2-4 at 900 Galleria Drive in Henderson. The water park will also feature red, white and blue decor, a DJ, free balloon animals for kids and food trucks. Discounted admission is $27.95 each day after 4 p.m. Through July 30, the water park is launching fireworks on Saturday evenings as part of its Spectacular Slide Nights. cowabungabayvegas.com

The City of Henderson will present Star-Spangled Sky 2021 with fireworks launching at 9 p.m. July 4 from Station Casinos’ Green Valley Ranch Resort, Lake Las Vegas, the M Resort and Galleria at Sunset. Patriotic music will be broadcast on four iHeartRadio stations during the shows. The public can listen in at Sunny 106.5, The Bull 95.5, 93.1 The Mountain and Real 103.9. cityofhenderson.com

Gates open at 5 p.m. July 3 for the Night of Fire at the Bullring at Las Vegas Motor Speedway, 7000 Las Vegas Blvd. North. Featuring NASCAR-sanctioned stock car racing, post-race fireworks, $2 hot dogs and Coca-Cola products, $3 beers and more. Racing will begin at 7 p.m., and fireworks will follow the racing. Tickets are $15 in advance or $20 day of for adults; children 12 and younger are free with a ticketed adult. lvms.com

The “Rockets Over the River” fireworks display over the Colorado River will be at 9 p.m. July 4 in Laughlin. Free public viewing will be along the Laughlin Riverwalk. Patriotic music will be choreographed to the fireworks and simulcast over Laughlin hotel speakers and local radio stations. visitlaughlin.com

The “Rockets Over the Red Mesa” event will feature a concert by the Nevada POPS Orchestra, a community vendor village and fireworks, starting at 6 p.m. July 4 at Eureka Casino Resort, 275 Mesa Blvd., Mesquite. Admission is free. The concert will begin at 8 p.m., followed by the fireworks show accompanied by the orchestra at 9 p.m. eurekamesquite.com

The 4th of July Fireworks Spectacular will be presented at 9 p.m. July 4 at Petrack Park at Highway 160 and Basin Avenue. Admission is free. “Fireworks Over Pahrump,” where visitors can launch their own fireworks, will be offered from 7 p.m. to midnight July 1-6 at the Fireworks Over Pahrump launch site, located 1-mile west on Gamebird Road, off of Highway 160. A special permit must be obtained from one of the five fireworks stores in Pahrump. Permits are $5 per person. The launch site is first come, first served and visitors have a 30-minute time limit. visitpahrump.com/events

The Plaza will celebrate it’s 50th anniversary and Independence Day with three nights of fireworks in downtown Las Vegas. The shows will begin at 10 p.m. July 2-4. plazahotelcasino.com

The resort’s grand opening celebration July 4 at Ayu Dayclub will feature a performance by Miley Cyrus and a fireworks show. Doors open at 9 p.m. and the fireworks will begin at 11 p.m. as part of the Las Vegas Convention and Visitors Authority’s fireworks show. Ticket prices vary. zoukgrouplv.com/events

Station Casinos will kickoff the Fourth of July weekend with a fireworks show celebrating its 45th anniversary at 9 p.m. July 1 at Palace Station. On the Fourth of July, fireworks will launch at 9 p.m. from Red Rock Resort and Green Valley Ranch Resort. The shows will be livestreamed on all social media channels, including Twitch. stationcasinosblog.com

Fireworks will be launched from The Strat’s Tower at 11 p.m. July 4. The tower will also be illuminated in red, white and blue starting at dusk. Views of fireworks displays around the valley can be seen at the SkyPod, the 106th level and from the Strat’s thrill rides. Starting at 7 p.m., tower entry for fireworks viewing will be $40. Self-parking and valet are free. thestrat.com

The Las Vegas Convention and Visitors Authority will present fireworks at 11 p.m. from the rooftops at Aria, Caesars Palace, Planet Hollywood Resort, Resorts World, The Strat, Treasure Island and The Venetian.

“America’s Birthday Party Parade: A Summerlin Community Celebration” will feature a 30-minute show with floats, balloons, bands, performances and more, starting at 9 a.m. July 3. The parade will begin at Hillpointe Road and Hills Center Drive and travel south to Village Center Circle before turning west on Trails Center Drive and ending at the Trails Park. summerlinpatrioticparade.com

The water park’s Red, White & Wild bash will feature a performance by Keelie Walker and a fireworks show July 4 at 7055 S. Fort Apache Road. The fireworks show will be at approximately 8:45 p.m. Ticket prices vary. wetnwildlasvegas.com