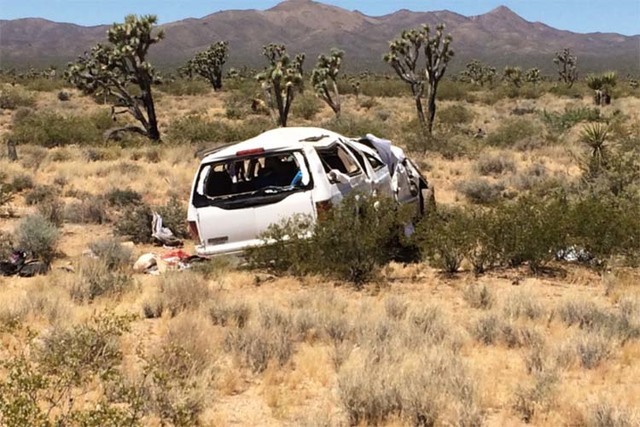 Two people were killed in a single-vehicle crash on state Route 164 west of Searchlight on Friday, June 17, 2016. (Nevada Highway Patrol)

Two people were killed and six others injured in a Friday morning rollover crash on eastbound state Route 164 west of Searchlight, according to Nevada Highway Patrol.

A minivan carrying four adults and six juveniles crashed near mile marker 13 just after 9 a.m. Friday. Two of the passengers, one of whom was ejected from the vehicle, were pronounced dead at the scene. The other two were airlifted to University Medical Center in critical condition, according to trooper Jason Buratczuk.

Four juveniles were also taken to UMC, two with minor injuries and two with nonlife-threatening injuries.

Buratczuk said that investigators believe the crash was caused by tire failure.

One of the eastbound Route 164 lanes remains open while NHP investigates the crash.

The names of the deceased passengers will be released by the Clark County coroner’s office after their next of kin have been notified.